Analgesic for Oral use Only

Pentazocine and naloxone hydrochlorides tablets are an analgesic for oral administration.

Chemically, naloxone hydrochloride is 17-AIlyl-4,5α-epoxy-3,14-dihydroxymorphinan-6-one hydrochloride. It is a slightly off-white powder, and is soluble in water and dilute acids. It has the following structural formula: 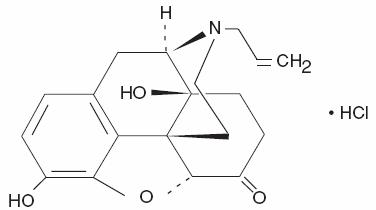 Pentazocine is a potent analgesic which when administered orally in a 50 mg dose appears equivalent in analgesic effect to 60 mg (1 grain) of codeine. Onset of significant analgesia usually occurs between 15 and 30 minutes after oral administration, and duration of action is usually three hours or longer. Onset and duration of action and the degree of pain relief are related both to dose and the severity of pretreatment pain. Pentazocine weakly antagonizes the analgesic effects of morphine and meperidine; in addition, it produces incomplete reversal of cardiovascular, respiratory, and behavioral depression induced by morphine and meperidine. Pentazocine has about 1/50 the antagonistic activity of nalorphine. It also has sedative activity.

Pentazocine is well absorbed from the gastrointestinal tract. Concentrations in plasma coincide closely with the onset, duration, and intensity of analgesia; peak values occur 1 to 3 hours after oral administration. The half-life in plasma is 2 to 3 hours.

Pentazocine is metabolized in the liver and excreted primarily in the urine. Pentazocine passes into the fetal circulation.

Pentazocine and naloxone hydrochlorides tablets are indicated for the relief of moderate to severe pain.

Pentazocine and naloxone hydrochlorides tablets are indicated for oral use only.

Pentazocine and naloxone hydrochlorides tablets should not be administered to patients who are hypersensitive to either pentazocine or naloxone.

Drug Dependence. Pentazocine can cause a physical and psychological dependence. (See DRUG ABUSE AND DEPENDENCE.)

Head Injury and Increased Intracranial Pressure. As in the case of other potent analgesics, the potential of pentazocine for elevating cerebrospinal fluid pressure may be attributed to CO2 retention due to the respiratory depressant effects of the drug. These effects may be markedly exaggerated in the presence of head injury, other intracranial lesions, or a pre-existing increase in intracranial pressure. Furthermore, pentazocine can produce effects which may obscure the clinical course of patients with head injuries. In such patients, pentazocine must be used with extreme caution and only if its use is deemed essential.

Usage with Alcohol. Due to the potential for increased CNS depressant effects, alcohol should be used with caution in patients who are currently receiving pentazocine.

Patients Receiving Narcotics. Pentazocine is a mild narcotic antagonist. Some patients previously given narcotics, including methadone for the daily treatment of narcotic dependence, have experienced withdrawal symptoms after receiving pentazocine.

Acute CNS Manifestations. Patients receiving therapeutic doses of pentazocine have experienced hallucinations (usually visual), disorientation, and confusion which have cleared spontaneously within a period of hours. The mechanism of this reaction is not known. Such patients should be very closely observed and vital signs checked. If the drug is reinstituted, it should be done with caution since these acute CNS manifestations may recur.

Caution should be used when pentazocine is administered to patients prone to seizures; seizures have occurred in a few such patients in association with the use of pentazocine though no cause and effect relationship has been established.

Decreased metabolism of pentazocine by the liver in extensive liver disease may predispose to accentuation of side effects. Although laboratory tests have not indicated that pentazocine causes or increases renal or hepatic impairment, the drug should be administered with caution to patients with such impairment.

In prescribing pentazocine for long-term use, the physician should take precautions to avoid increases in doses by the patient.

Narcotic drug products are generally considered to elevate biliary tract pressure for varying periods following their administration. Some evidence suggests that pentazocine may differ from other marketed narcotics in this respect (i.e., it causes little or no elevation in biliary tract pressures). The clinical significance of these findings, however, is not yet known.

Since sedation, dizziness, and occasional euphoria have been noted, ambulatory patients should be warned not to operate machinery, drive cars, or unnecessarily expose themselves to hazards. Pentazocine may cause physical and psychological dependence when taken alone and may have additive CNS depressant properties when taken in combination with alcohol or other CNS depressants.

As with all drugs, pentazocine should be used with caution in patients with myocardial infarction who have nausea or vomiting.

No long-term studies in animals to test for carcinogenesis have been performed with the components of pentazocine and naloxone hydrochlorides tablets.

Safety and effectiveness in pediatric patients below the age of 12 years have not been established.

Controlled clinical studies of pentazocine and naloxone hydrochlorides tablets did not include sufficient numbers of subjects aged 65 and over to determine whether they respond differently from younger subjects. Other reported clinical experience has not identified differences in responses or effectiveness in analgesic activity between the elderly and younger patients. In general, dose selection for an elderly patient should be cautious, usually starting at the low end of the dosing range, reflecting the greater frequency of decreased hepatic, renal, or cardiac function, and of concomitant disease or other drug therapy.

Acute CNS Manifestations: Patients receiving therapeutic doses of pentazocine have experienced hallucinations (usually visual), disorientation, and confusion which have cleared spontaneously within a period of hours. The mechanism of this reaction is not known. Such patients should be closely observed and vital signs checked. If the drug is reinstituted it should be done with caution since these acute CNS manifestations may recur.

In prescribing pentazocine for chronic use, the physician should take precautions to avoid increases in dose by the patient.

Severe, even lethal, consequences may result from misuse of tablets by injection either alone or in combination with other substances, such as pulmonary emboli, vascular occlusion, ulceration and abscesses, and withdrawal symptoms in narcotic dependent individuals.

Manifestations. Clinical experience of overdosage with this oral medication has been insufficient to define the signs of this condition.

Treatment. Oxygen, intravenous fluids, vasopressors, and other supportive measures should be employed as indicated. Assisted or controlled ventilation should also be considered. For respiratory depression due to overdosage or unusual sensitivity to pentazocine, parenteral naloxone is a specific and effective antagonist.

Adults. The usual initial adult dose is 1 tablet every three or four hours. This may be increased to 2 tablets when needed. Total daily dosage should not exceed 12 tablets.

When anti-inflammatory or antipyretic effects are desired in addition to analgesia, aspirin can be administered concomitantly with this product.

Pediatric Patients. Since clinical experience in pediatric patients under 12 years of age is limited, administration of this product in this age group is not recommended.

Duration of Therapy. Patients with chronic pain who receive pentazocine and naloxone hydrochlorides tablets orally for prolonged periods have only rarely been reported to experience withdrawal symptoms when administration was abruptly discontinued (see WARNINGS). Tolerance to the analgesic effect of pentazocine has also been reported only rarely. However, there is no long-term experience with the oral administration of pentazocine and naloxone hydrochlorides tablets.

Pentazocine and Naloxone Hydrochlorides Tablets USP are light green, scored, capsule shaped tablets debossed 395 to the left of the score, 50 over 0.5 to the right of the score and WATSON on the reverse side.

They are supplied by Keltman Pharmaceuticals Inc. as follows:

This Product was Repackaged By Sandhills Packaging For: