Hydrochlorothiazide is a diuretic and antihypertensive. It is the 3,4-dihydro derivative of chlorothiazide. It is chemically designated as 6-chloro-3,4-dihydro-2H-1,2,4-benzothiadiazine- 7-sulfonamide 1,1-dioxide and has the following structural formula: 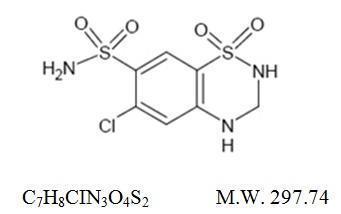 The mechanism of the antihypertensive effect of thiazides is unknown. Hydrochlorothiazide does not usually affect normal blood pressure.

Hydrochlorothiazide affects the distal renal tubular mechanism of electrolyte reabsorption. At maximal therapeutic dosage all thiazides are approximately equal in their diuretic efficacy.

Hydrochlorothiazide increases excretion of sodium and chloride in approximately equivalent amounts. Natriuresis may be accompanied by some loss of potassium and bicarbonate.

After oral use diuresis begins within 2 hours, peaks in about 4 hours and lasts about 6 to 12 hours.

Hydrochlorothiazide is not metabolized but is eliminated rapidly by the kidney. When plasma levels have been followed for at least 24 hours, the plasma half-life has been observed to vary between 5.6 and 14.8 hours. At least 61 percent of the oral dose is eliminated unchanged within 24 hours. Hydrochlorothiazide crosses the placental but not the blood-brain barrier and is excreted in breast milk.

Hydrochlorothiazide tablets have also been found useful in edema due to various forms of renal dysfunction such as nephrotic syndrome, acute glomerulonephritis, and chronic renal failure.

Hydrochlorothiazide tablets are indicated in the management of hypertension either as the sole therapeutic agent or to enhance the effectiveness of other antihypertensive drugs in the more severe forms of hypertension.

Routine use of diuretics during normal pregnancy is inappropriate and exposes mother and fetus to unnecessary hazard. Diuretics do not prevent development of toxemia of pregnancy and there is no satisfactory evidence that they are useful in the treatment of toxemia.

Edema during pregnancy may arise from pathologic causes or from the physiologic and mechanical consequences of pregnancy. Thiazides are indicated in pregnancy when edema is due to pathologic causes, just as they are in the absence of pregnancy (see PRECAUTIONS: Pregnancy). Dependent edema in pregnancy, resulting from restriction of venous return by the gravid uterus, is properly treated through elevation of the lower extremities and use of support stockings. Use of diuretics to lower intravascular volume in this instance is illogical and unnecessary. During normal pregnancy there is hypervolemia which is not harmful to the fetus or the mother in the absence of cardiovascular disease. However, it may be associated with edema, rarely generalized edema. If such edema causes discomfort, increased recumbency will often provide relief. Rarely this edema may cause extreme discomfort which is not relieved by rest. In these instances, a short course of diuretic therapy may provide relief and be appropriate.

Hypersensitivity to this product or to other sulfonamide-derived drugs.

Thiazides should be used with caution in patients with impaired hepatic function or progressive liver disease, since minor alterations of fluid and electrolyte balance may precipitate hepatic coma.

Thiazides may add to or potentiate the action of other antihypertensive drugs.

Sensitivity reactions may occur in patients with or without a history of allergy or bronchial asthma.

The possibility of exacerbation or activation of systemic lupus erythematosus has been reported.

Lithium generally should not be given with diuretics (see PRECAUTIONS: Drug Interactions).

All patients receiving diuretic therapy should be observed for evidence of fluid or electrolyte imbalance: namely, hyponatremia, hypochloremic alkalosis, and hypokalemia. Serum and urine electrolyte determinations are particularly important when the patient is vomiting excessively or receiving parenteral fluids. Warning signs or symptoms of fluid and electrolyte imbalance, irrespective of cause, include dryness of mouth, thirst, weakness, lethargy, drowsiness, restlessness, confusion, seizures, muscle pains or cramps, muscular fatigue, hypotension, oliguria, tachycardia, and gastrointestinal disturbances such as nausea and vomiting.

Hypokalemia may develop, especially with brisk diuresis, when severe cirrhosis is present or after prolonged therapy.

Interference with adequate oral electrolyte intake will also contribute to hypokalemia. Hypokalemia may cause cardiac arrhythmia and may also sensitize or exaggerate the response of the heart to the toxic effects of digitalis (e.g., increased ventricular irritability). Hypokalemia may be avoided or treated by use of potassium sparing diuretics or potassium supplements such as foods with a high potassium content.

Although any chloride deficit is generally mild and usually does not require specific treatment except under extraordinary circumstances (as in liver disease or renal disease), chloride replacement may be required in the treatment of metabolic alkalosis.

Dilutional hyponatremia may occur in edematous patients in hot weather; appropriate therapy is water restriction, rather than administration of salt, except in rare instances when the hyponatremia is life threatening. In actual salt depletion, appropriate replacement is the therapy of choice.

Hyperuricemia may occur or acute gout may be precipitated in certain patients receiving thiazides.

In diabetic patients dosage adjustments of insulin or oral hypoglycemic agents may be required. Hyperglycemia may occur with thiazide diuretics. Thus latent diabetes mellitus may become manifest during thiazide therapy.

The antihypertensive effects of the drug may be enhanced in the post-sympathectomy patient.

Thiazides have been shown to increase the urinary excretion of magnesium; this may result in hypomagnesemia.

Thiazides may decrease urinary calcium excretion. Thiazides may cause intermittent and slight elevation of serum calcium in the absence of known disorders of calcium metabolism. Marked hypercalcemia may be evidence of hidden hyperparathyroidism. Thiazides should be discontinued before carrying out tests for parathyroid function.

Increases in cholesterol and triglyceride levels may be associated with thiazide diuretic therapy.

Periodic determination of serum electrolytes to detect possible electrolyte imbalance should be done at appropriate intervals.

When given concurrently the following drugs may interact with thiazide diuretics.

Potentiation of orthostatic hypotension may occur.

Dosage adjustment of the antidiabetic drug may be required.

Absorption of hydrochlorothiazide is impaired in the presence of anionic exchange resins. Single doses of either cholestyramine or colestipol resins bind the hydrochlorothiazide and reduce its absorption from the gastrointestinal tract by up to 85 and 43 percent, respectively.

Possible decreased response to pressor amines but not sufficient to preclude their use.

Generally should not be given with diuretics. Diuretic agents reduce the renal clearance of lithium and add a high risk of lithium toxicity. Refer to the package insert for lithium preparations before use of such preparations with hydrochlorothiazide.

In some patients, the administration of a non-steroidal anti-inflammatory agent can reduce the diuretic, natriuretic, and antihypertensive effects of loop, potassium-sparing and thiazide diuretics. Therefore, when hydrochlorothiazide and non-steroidal anti-inflammatory agents are used concomitantly, the patient should be observed closely to determine if the desired effect of the diuretic is obtained.

Thiazides should be discontinued before carrying out tests for parathyroid function (see PRECAUTIONS: General).

Hydrochlorothiazide was not genotoxic in vitro in the Ames mutagenicity assay of Salmonella typhimurium strains TA 98, TA 100, TA 1535, TA 1537, and TA 1538 and in the Chinese Hamster Ovary (CHO) test for chromosomal aberrations, or in vivo in assays using mouse germinal cell chromosomes, Chinese hamster bone marrow chromosomes, and the Drosophila sex-linked recessive lethal trait gene. Positive test results were obtained only in the in vitro CHO Sister Chromatid Exchange (clastogenicity) and in the Mouse Lymphoma Cell (mutagenicity) assays, using concentrations of hydrochlorothiazide from 43 to 1300 mcg/mL, and in the Aspergillus nidulans non-disjunction assay at an unspecified concentration.

There are no well-controlled clinical trials in pediatric patients. Information on dosing in this age group is supported by evidence from empiric use in pediatric patients and published literature regarding the treatment of hypertension in such patients. (See DOSAGE AND ADMINISTRATION: Infants and Children).

The following adverse reactions have been reported and, within each category, are listed in order of decreasing severity.

Body as a Whole: Weakness.

Hydrochlorothiazide is associated with an increased risk of non-melanoma skin cancer. In a study conducted in the Sentinel System, increased risk was predominantly for squamous cell carcinoma (SCC) and in white patients taking large cumulative doses. The increased risk for SCC in the overall population was approximately 1 additional case per 16,000 patients per year, and for white patients taking a cumulative dose of ≥50,000 mg the risk increase was approximately 1 additional SCC case for every 6,700 patients per year.

In the event of overdosage, symptomatic and supportive measures should be employed. Emesis should be induced or gastric lavage performed. Correct dehydration, electrolyte imbalance, hepatic coma and hypotension by established procedures. If required, give oxygen or artificial respiration for respiratory impairment. The degree to which hydrochlorothiazide is removed by hemodialysis has not been established. The oral LD50 of hydrochlorothiazide is greater than 10 g/kg in the mouse and rat.

Therapy should be individualized according to patient response. Use the smallest dosage necessary to achieve the required response.

The usual adult dosage is 25 mg to 100 mg daily as a single or divided dose. Many patients with edema respond to intermittent therapy, i.e., administration on alternate days or on three to five days each week. With an intermittent schedule, excessive response and the resulting undesirable electrolyte imbalance are less likely to occur.

For Control of Hypertension:

The usual initial dose in adults is 25 mg daily given as a single dose. The dose may be increased to 50 mg daily, given as a single or two divided doses. Doses above 50 mg are often associated with marked reductions in serum potassium (see also PRECAUTIONS).

Patients usually do not require doses in excess of 50 mg of hydrochlorothiazide daily when used concomitantly with other antihypertensive agents.

Infants and Children: For Diuresis and For Control of Hypertension:

The 25 mg tablets are White to off white, round shaped bevel edge, scored tablets debossed with 111 on one side of the tablet and S to the left of the score and G to the right of the score on the other side. They are available as follows:

The 50 mg tablets are White to off white, round shaped bevel edge, scored tablets debossed with 112 on one side of the tablet and S to the left of the score and G to the right of the score on the other side. They are available as follows: