The molecular formula of timolol is Formula C13H24N4O3S and its structural formula is: 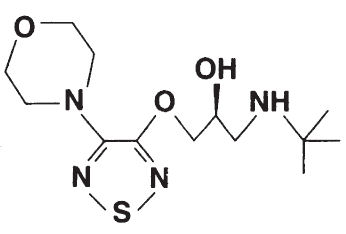 Timolol (as the hemihydrate) is a white, odorless, crystalline powder which is slightly soluble in water and freely soluble in ethanol. Timolol hemihydrate is stable at room temperature.

Each mL of Betimol® 0.5% contains 5.12 mg of timolol hemihydrate equivalent to 5.0 mg timolol.

Timolol is a non-selective beta-adrenergic antagonist.

Timolol, when applied topically in the eye, reduces normal and elevated intraocular pressure (IOP) whether or not accompanied by glaucoma. Elevated intraocular pressure is a major risk factor in the pathogenesis of glaucomatous visual field loss. The higher the level of IOP, the greater the likelihood of glaucomatous visual field loss and optic nerve damage. The predominant mechanism of ocular hypotensive action of topical beta-adrenergic blocking agents is likely due to a reduction in aqueous humor production.

When given orally, timolol is well absorbed and undergoes considerable first pass metabolism. Timolol and its metabolites are primarily excreted in the urine. The half-life of timolol in plasma is approximately 4 hours.

In two controlled multicenter studies in the U.S., Betimol® 0.25% and 0.5% were compared with respective timolol maleate eyedrops. In these studies, the efficacy and safety profile of Betimol® was similar to that of timolol maleate.

Betimol® is indicated in the treatment of elevated intraocular pressure in patients with ocular hypertension or open-angle glaucoma.

Betimol® is contraindicated in patients with overt heart failure, cardiogenic shock, sinus bradycardia, second- or third-degree atrioventricular block, bronchial asthma or history of bronchial asthma, or severe chronic obstructive pulmonary disease, or hypersensitivity to any component of this product.

As with other topically applied ophthalmic drugs, Betimol® is absorbed systemically. The same adverse reactions found with systemic administration of beta-adrenergic blocking agents may occur with topical administration. For example, severe respiratory and cardiac reactions, including death due to bronchospasm in patients with asthma, and rarely, death in association with cardiac failure have been reported following systemic or topical administration of beta-adrenergic blocking agents.

Sympathetic stimulation may be essential for support of the circulation in individuals with diminished myocardial contractility, and its inhibition by beta-adrenergic receptor blockade may precipitate more severe cardiac failure.

Because of the potential effects of beta-adrenergic blocking agents relative to blood pressure and pulse, these agents should be used with caution in patients with cerebrovascular insufficiency. If signs or symptoms suggesting reduced cerebral blood flow develop following initiation of therapy with Betimol®, alternative therapy should be considered.

There have been reports of bacterial keratitis associated with the use of multiple dose containers of topical ophthalmic products. These containers had been inadvertently contaminated by patients who, in most cases, had a concurrent corneal disease or a disruption of the ocular epithelial surface. (See PRECAUTIONS, Information for Patients.)

Patients should be instructed to avoid allowing the tip of the dispensing container to contact the eye or surrounding structures.

Patients should also be instructed that ocular solutions can become contaminated by common bacteria known to cause ocular infections. Serious damage to the eye and subsequent loss of vision may result from using contaminated solutions. (See PRECAUTIONS, General.)

Patients requiring concomitant topical ophthalmic medications should be instructed to administer these at least 5 minutes apart.

Patients who are receiving a beta-adrenergic blocking agent orally and Betimol® should be observed for a potential additive effect either on the intraocular pressure or on the known systemic effects of beta-blockade.

Close observation of the patient is recommended when a beta-blocker is administered to patients receiving catecholamine-depleting drugs such as reserpine, because of possible additive effects and the production of hypotension and/or marked bradycardia, which may produce vertigo, syncope, or postural hypotension.

The concomitant use of beta-adrenergic blocking agents with digitalis and calcium antagonists may have additive effects in prolonging atrioventricular conduction time.

Carcinogenicity of timolol (as the maleate) has been studied in mice and rats. In a two-year study orally administrated timolol maleate (300mg/kg/day) (approximately 42,000 times the systemic exposure following the maximum recommended human ophthalmic dose) in male rats caused a significant increase in the incidence of adrenal pheochromocytomas; the lower doses, 25 mg or 100 mg/kg daily did not cause any changes.

Mutagenic potential of timolol was evaluated in vivo in the micronucleus test and cytogenetic assay and in vitro in the neoplastic cell transformation assay and Ames test. In the bacterial mutagenicity test (Ames test) high concentrations of timolol maleate (5000 and 10,000 g/plate) statistically significantly increased the number of revertants in Salmonella typhimurium TA100, but not in the other three strains tested. However, no consistent dose-response was observed nor did the number of revertants reach the double of the control value, which is regarded as one of the criteria for a positive result in the Ames test. In vivo genotoxicity tests (the mouse micronucleus test and cytogenetic assay) and in vitro the neoplastic cell transformation assay were negative up to dose levels of 800 mg/kg and 100 g/mL, respectively.

No adverse effects on male and female fertility were reported in rats at Timolol oral doses of up to 150 mg/kg/day (21,000 times the systemic exposure following the maximum recommended human ophthalmic dose).

There are no adequate and well-controlled studies in pregnant women. Betimol® should be used during pregnancy only if the potential benefit justifies the potential risk to the fetus.

Because of the potential for serious adverse reactions in nursing infants from timolol, a decision should be made whether to discontinue nursing or to discontinue the drug, taking into account the importance of the drug to the mother.

Safety and efficacy in pediatric patients have not been established.

The most frequently reported ocular event in clinical trials was burning/stinging on instillation and was comparable between Betimol® and timolol maleate (approximately one in eight patients).

The following adverse events were associated with use of Betimol® in frequencies of more than 5% in two controlled, double-masked clinical studies in which 184 patients received 0.25% or 0.5% Betimol®:

The following side effects were reported in frequencies of 1 to 5%:

In addition, the following adverse reactions have been reported with ophthalmic use of beta blockers:

Depression, impotence, increase in signs and symptoms of myasthenia gravis and paresthesia.

No information is available on overdosage with Betimol®. Symptoms that might be expected with an overdose of a beta-adrenergic receptor blocking agent are bronchospasm, hypotension, bradycardia, and acute cardiac failure.

Since in some patients the pressure-lowering response to Betimol® may require a few weeks to stabilize, evaluation should include a determination of intraocular pressure after approximately 4 weeks of treatment with Betimol® .

Dosages above one drop of 0.5 percent Betimol® twice a day generally have not been shown to produce further reduction in intraocular pressure. If the patient's intraocular pressure is still not at a satisfactory level on this regimen, concomitant therapy with pilocarpine and other miotics, and/or epinephrine, and/or systemically administered carbonic anhydrase inhibitors, such as acetazolamide, can be instituted.

Betimol® 0.25% is supplied in a white, opaque, plastic, ophthalmic dispenser bottle with a controlled drop tip as follows:

Betimol® 0.5% is supplied in a white, opaque, plastic, ophthalmic dispenser bottle with a controlled drop tip as follows: 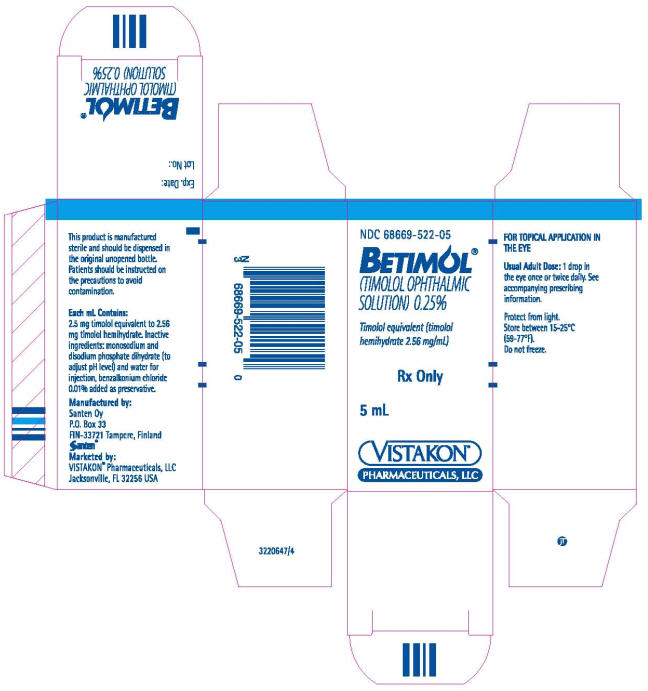