Each suppository contains 20 mg of dinoprostone in a mixture of glycerides of fatty acids.

PROSTIN E2 Vaginal Suppository administered intravaginally stimulates the myometrium of the gravid uterus to contract in a manner that is similar to the contractions seen in the term uterus during labor. Whether or not this action results from a direct effect of dinoprostone on the myometrium has not been determined with certainty at this time. Nonetheless, the myometrial contractions induced by the vaginal administration of dinoprostone are sufficient to produce evacuation of the products of conception from the uterus in the majority of cases.

Dinoprostone is also capable of stimulating the smooth muscle of the gastrointestinal tract of man. This activity may be responsible for the vomiting and/or diarrhea that is not uncommon when dinoprostone is used to terminate pregnancy.

Dinoprostone, as with other potent oxytocic agents, should be used only with strict adherence to recommended dosages. Dinoprostone should be used by medically trained personnel in a hospital which can provide immediate intensive care and acute surgical facilities.

Dinoprostone does not appear to directly affect the fetoplacental unit. Therefore, the possibility does exist that the previable fetus aborted by dinoprostone could exhibit transient life signs. Dinoprostone is not indicated if the fetus in utero has reached the stage of viability. Dinoprostone should not be considered a feticidal agent.

Evidence from animal studies has suggested that certain prostaglandins may have some teratogenic potential. Therefore, any failed pregnancy termination with dinoprostone should be completed by some other means.

PROSTIN E2 Vaginal Suppository should not be used for extemporaneous preparation of any other dosage form.

Animal studies lasting several weeks at high doses have shown that prostaglandins of the E and F series can induce proliferation of bone. Such effects have also been noted in newborn infants who have received prostaglandin E1 during prolonged treatment. There is no evidence that short term administration of PROSTIN E2 Vaginal Suppository can cause similar bone effects.

As in spontaneous abortion, where the process is sometimes incomplete, abortion induced by PROSTIN E2 may sometimes be incomplete. In such cases, other measures should be taken to assure complete abortion.

In patients with a history of asthma, hypo-or hypertension, cardiovascular disease, renal disease, hepatic disease, anemia, jaundice, diabetes or history of epilepsy, dinoprostone should be used with caution.

Dinoprostone administered by the vaginal route should be used with caution in the presence of cervicitis, infected endocervical lesions, or acute vaginitis.

As with any oxytocic agent, dinoprostone should be used with caution in patients with compromised (scarred) uteri.

Dinoprostone vaginal therapy is associated with transient pyrexia that may be due to its effect on hypothalamic thermoregulation. In the patients studied, temperature elevations in excess of 2°F (1.1°C) were observed in approximately one-half of the patients on the recommended dosage regimen. In all cases, temperature returned to normal on discontinuation of therapy. Differentiation of post-abortion endometritis from drug-induced temperature elevations is difficult, but with increasing clinical exposure and experience with PGE2 vaginal therapy the distinctions become more obviously apparent and are summarized below:

In the absence of clinical or bacteriological evidence of intrauterine infection, supportive therapy for drug induced fevers includes the forcing of fluids. As all PGE2-induced fevers have been found to be transient or self-limiting, it is doubtful if any simple empirical measures for temperature reduction are indicated.

Carcinogenic bioassay studies have not been conducted in animals with PROSTIN E2 due to the limited indications for use and short duration of administration. No evidence of mutagenicity was observed in the Micronucleus Test or Ames Assay.

Animal studies do not indicate that PROSTIN E2 is teratogenic, however, it has been shown to be embryotoxic in rats and rabbits and any dose which produces increased uterine tone could put the embryo or fetus at risk [see WARNINGS].

The most frequent adverse reactions observed with the use of dinoprostone for abortion are related to its contractile effect on smooth muscle.

Two cases of myocardial infarction following the use of dinoprostone have been reported in patients with a history of cardiovascular disease.

It is not known whether these events were related to the administration of dinoprostone.

Adverse effects in decreasing order of their frequency, observed with the use of dinoprostone, not all of which are clearly drug related include:

STORE IN A FREEZER NOT ABOVE –20°C (–4°F) BUT BRING TO ROOM TEMPERATURE JUST PRIOR TO USE.

REMOVE FOIL BEFORE USE.

A suppository containing 20 mg of dinoprostone should be inserted high into the vagina. The patient should remain in the supine position for ten minutes following insertion. Additional intravaginal administration of each subsequent suppository should be at 3- to 5-hour intervals until abortion occurs. Within the above recommended intervals administration time should be determined by abortifacient progress, uterine contractility response, and by patient tolerance. Continuous administration of the drug for more than 2 days is not recommended.

PROSTIN E2 Vaginal Suppositories are available in foil strips of 5 individually sealed suppositories, NDC 0009-0827-03. Each suppository contains 20 mg of dinoprostone in a mixture of glycerides of fatty acids.

This product's labeling may have been updated. For current full prescribing information, please visit www.pfizer.com 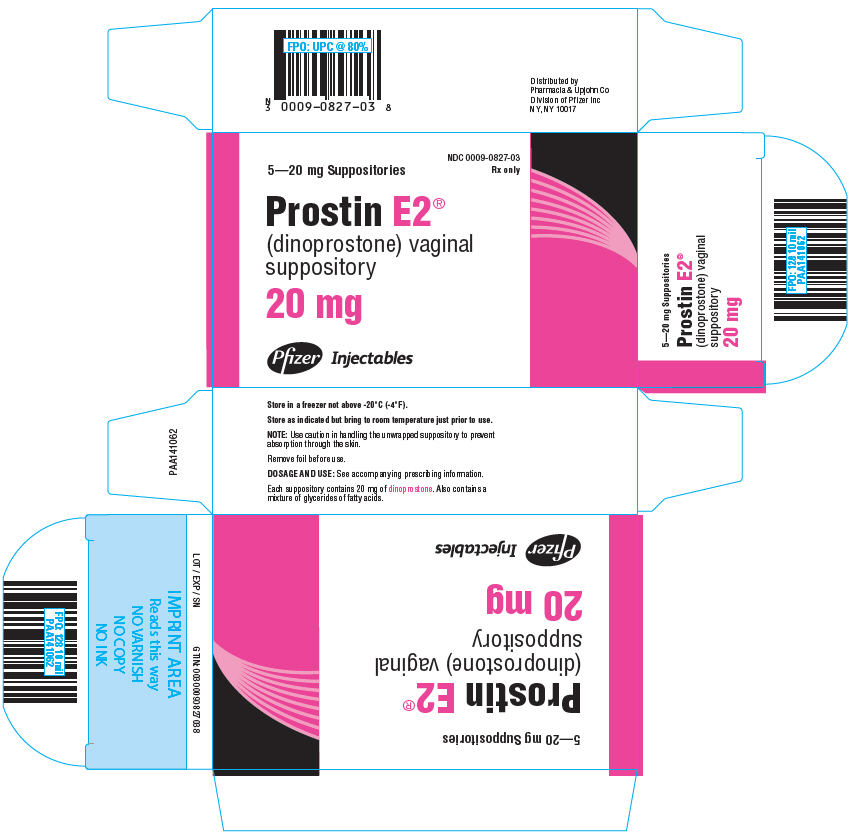