MULTI-VIT WITH FLUORIDE- vitamin a palmitate and ascorbic acid and cholecalciferol and .alpha.-tocopherol acetate, dl- and thiamine hydrochloride and riboflavin and niacinamide and pyridoxine hydrochloride and cyanocobalamin and sodium fluoride solution
Par Pharmaceutical

It is well established that fluoridation of the water supply (1 ppm fluoride) during the period of tooth development leads to a significant decrease in the incidence of dental caries. Hydroxyapatite is the principal crystal for all calcified tissue in the human body. The fluoride ion reacts with the hydroxyapatite in the tooth as it is formed to produce the more caries-resistant crystal, fluorapatite. Three stages of fluoride deposition in tooth enamel can be distinguished:1 1) Small amounts (reflecting the low levels of fluoride in tissue fluids) are incorporated into the enamel crystals while they are being formed. 2) After enamel has been laid down, fluoride deposition continues in the surface enamel. Diffusion of fluoride from the surface inward is apparently restricted. 3) After eruption, the surface enamel acquires fluoride from water, food, supplementary fluoride, and smaller amounts from saliva.

Supplementation of the diet with nine essential vitamins. Supplementation of the diet with fluoride for caries prophylaxis. The American Academy of Pediatrics recommends that children up to age 16, in areas where drinking water contains less than optimal levels of fluoride, receive daily fluoride supplementation.2 MULTI-VIT with FLUORIDE 0.5 mg (multivitamin and fluoride supplement) drops provide fluoride in drop form for children ages 3 to 6 years in areas where the drinking water contains less than 0.3 ppm of fluoride and for children 6 years of age and older in areas where the drinking water contains 0.3 through 0.6 ppm of fluoride. Each 1 mL supplies sodium fluoride (0.5 mg fluoride) plus nine essential vitamins. MULTI-VIT with FLUORIDE 0.5 mg drops supply significant amounts of vitamins A, C, D, E, thiamin, riboflavin, niacin, vitamin B6 and vitamin B12 to supplement the diet, and to help assure that nutritional deficiencies of these vitamins will not develop. Thus, in a single easy-to-use preparation, infants and children obtain nine essential vitamins plus fluoride.

After four years the studies continued to support the effectiveness of vitamin-fluoride products, showing a reduction in carious surfaces of 68% in primary teeth and 46% in permanent teeth.4

Results at the end of 5 1/2 years further confirmed the previous findings and indicated that significant reductions in dental caries are apparent with the continued use of vitamin-fluoride products.5

As with all medicines, keep out of the reach of children.

The suggested dose should not be exceeded since dental fluorosis may result from continued ingestion of large amounts of fluoride. When prescribing MULTI-VIT with FLUORIDE 0.5 mg drops: 1) Determine the fluoride content of the drinking water from all major sources. 2) Make sure the child is not receiving significant amounts of fluoride from other sources such as medications and swallowed toothpaste. 3) Periodically check to make sure that the child does not develop significant dental fluorosis. MULTI-VIT with FLUORIDE 0.5 mg drops should be dispensed in the original plastic container, since contact with glass leads to instability and precipitation. (The amount of sodium fluoride in a 50-mL size is well below the maximum to be dispensed at one time according to recommendations of the American Dental Association.)

Allergic rash and other idiosyncrasies have been rarely reported.

1 mL daily, or as prescribed. May be dropped directly into mouth with dropper, or mixed with fruit juice, cereal or other food.

Occasional deepening of color has no significant effect on vitamin potency.

After opening, store away from direct light.

Your doctor or dentist is the best source of counsel and guidance in your child’s fluoride supplementation . 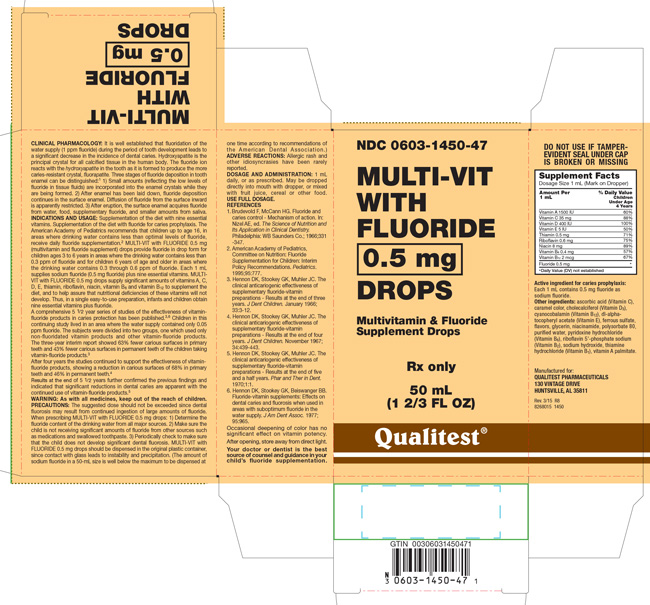