KAYEXALATE, brand of sodium polystyrene sulfonate is a benzene, diethenyl-polymer, with ethenylbenzene, sulfonated, sodium salt and has the following structural formula: 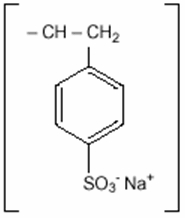 KAYEXALATE is indicated for the treatment of hyperkalemia.

KAYEXALATE is contraindicated in the following conditions: patients with hypokalemia, patients with a history of hypersensitivity to polystyrene sulfonate resins, obstructive bowel disease, neonates with reduced gut motility (postoperatively or drug induced) and oral administration in neonates (see PRECAUTIONS).

Cases of intestinal necrosis, which may be fatal, and other serious gastrointestinal adverse events (bleeding, ischemic colitis, perforation) have been reported in association with KAYEXALATE use. The majority of these cases reported the concomitant use of sorbitol. Risk factors for gastrointestinal adverse events were present in many of the cases including prematurity, history of intestinal disease or surgery, hypovolemia, and renal insufficiency and failure. Concomitant administration of sorbitol is not recommended (see PRECAUTIONS, Drug Interactions).

Since effective lowering of serum potassium with KAYEXALATE may take hours to days, treatment with this drug alone may be insufficient to rapidly correct severe hyperkalemia associated with states of rapid tissue breakdown (e.g., burns and renal failure) or hyperkalemia so marked as to constitute a medical emergency. Therefore, other definitive measures, including dialysis, should always be considered and may be imperative.

Serious potassium deficiency can occur from therapy with KAYEXALATE. The effect must be carefully controlled by frequent serum potassium determinations within each 24 hour period. Since intracellular potassium deficiency is not always reflected by serum potassium levels, the level at which treatment with KAYEXALATE should be discontinued must be determined individually for each patient. Important aids in making this determination are the patient's clinical condition and electrocardiogram. Early clinical signs of severe hypokalemia include a pattern of irritable confusion and delayed thought processes.

Like all cation-exchange resins, KAYEXALATE is not totally selective (for potassium) in its actions, and small amounts of other cations such as magnesium and calcium can also be lost during treatment. Accordingly, patients receiving KAYEXALATE should be monitored for all applicable electrolyte disturbances.

Caution is advised when KAYEXALATE is administered to patients who cannot tolerate even a small increase in sodium loads (i.e., severe congestive heart failure, severe hypertension, or marked edema). In such instances compensatory restriction of sodium intake from other sources may be indicated.

In the event of clinically significant constipation, treatment with KAYEXALATE should be discontinued until normal bowel motion is resumed (see WARNINGS, Intestinal Necrosis).

The simultaneous oral administration of KAYEXALATE with nonabsorbable cation-donating antacids and laxatives may reduce the resin's potassium exchange capability.

Intestinal obstruction due to concretions of aluminum hydroxide when used in combination with KAYEXALATE has been reported.

Concomitant use of Sorbitol with KAYEXALATE has been implicated in cases of intestinal necrosis, which may be fatal. Therefore, concomitant administration is not recommended. (See WARNINGS.)

KAYEXALATE may decrease absorption of lithium.

KAYEXALATE may decrease absorption of thyroxine.

The effectiveness of KAYEXALATE in pediatric patients has not been established. In neonates, KAYEXALATE should not be given by the oral route. In both children and neonates particular care should be observed with rectal administration, as excessive dosage or inadequate dilution could result in impaction of the resin.

KAYEXALATE may cause some degree of gastric irritation. Anorexia, nausea, vomiting, and constipation may occur especially if high doses are given. Also, hypokalemia, hypocalcemia, hypomagnesemia and significant sodium retention, and their related clinical manifestations, may occur (see WARNINGS). Occasionally diarrhea develops. Large doses in elderly individuals may cause fecal impaction (see PRECAUTIONS). Rare instances of intestinal necrosis have been reported. Intestinal obstruction due to concretions of aluminum hydroxide, when used in combination with KAYEXALATE, has been reported.

KAYEXALATE should not be heated for to do so may alter the exchange properties of the resin.

The effect must be carefully controlled by frequent
serum potassium determinations within each 24 hour
period. Sodium content approximately 60 mEq per 15 g.

Suspension should be freshly prepared and not
stored beyond 24 hours. dispense in tight, light-
resistant containers as defined in the official
compendia. 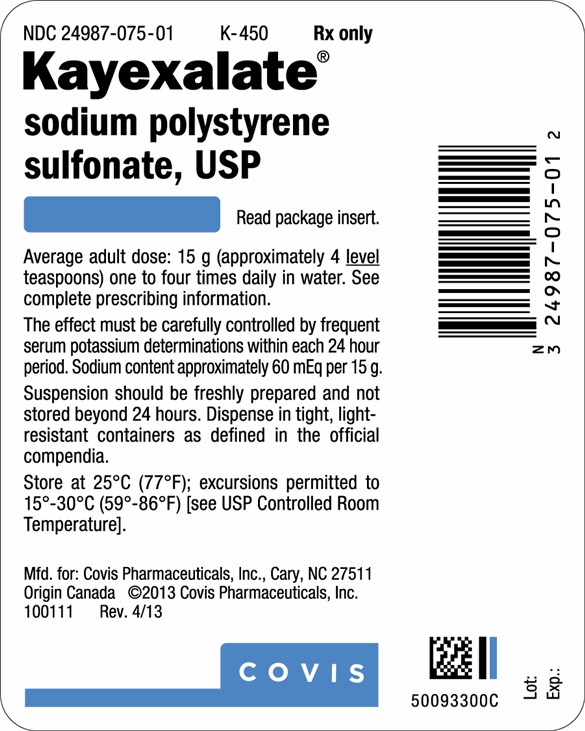