Sodium polystyrene sulfonate is a benzene, diethenyl- polymer with ethenylbenzene, sulfonated, sodium salt and has the following structural formula: 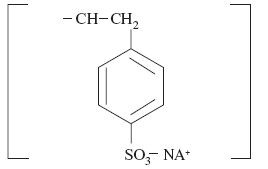 As the resin passes along the intestine or is retained in the colon after administration by enema, the sodium ions are partially released and are replaced by potassium ions. For the most part, this action occurs in the large intestine, which excretes potassium ions to a greater degree than does the small intestine. The efficiency of this process is limited and unpredictably variable. It commonly approximates the order of 33 percent but the range is so large that definitive indices of electrolyte balance must be clearly monitored. Metabolic data are unavailable.

This product is contraindicated in the following conditions: patients with hypokalemia, patients with a history of hypersensitivity to polystyrene sulfonate resins, obstructive bowel disease, neonates with reduced gut motility (postoperatively or drug induced) and oral administration in neonates (see PRECAUTIONS).

Since effective lowering of serum potassium with this product may take hours to days, treatment with this drug alone may be insufficient to rapidly correct severe hyperkalemia associated with states of rapid tissue breakdown (e.g., burns and renal failure) or hyperkalemia so marked as to constitute a medical emergency. Therefore, other definitive measures, including dialysis, should always be considered and may be imperative.

Caution is advised when Sodium Polystyrene Sulfonate is administered to patients who cannot tolerate even a small increase in sodium loads (i.e., severe congestive heart failure, severe hypertension, or marked edema). In such instances compensatory restriction of sodium intake from other sources may be indicated.

In the event of clinically significant constipation, treatment with Sodium Polystyrene Sulfonate should be discontinued until normal bowel motion is resumed. Magnesium-containing laxatives or sorbitol should not be used (see PRECAUTIONS, Drug Interactions).

Concomitant use of Sorbitol with Sodium Polystyrene Sulfonate has been implicated in cases of chronic necrosis. Therefore, concomitant administration is not recommended.

The effectiveness of Sodium Polystyrene Sulfonate in pediatric patients has not been established. In neonates, Sodium Polystyrene Sulfonate should not be given by the oral route. In both children and neonates, particular care should be observed with rectal administration, as excessive dosage or inadequate dilution could result in impaction of the resin.

Due to the risk of digestive hemorrhage or colonic necrosis, particular care should be observed in premature infants or low birth weight infants.

Sodium Polystyrene Sulfonate may cause some degree of gastric irritation. Anorexia, nausea, vomiting, and constipation may occur especially if high doses are given. Also, hypokalemia, hypocalcemia, and significant sodium retention, and their related clinical manifestations, may occur (see WARNINGS). Occasionally diarrhea develops. Large doses in elderly individuals may cause fecal impaction (see PRECAUTIONS). Rare instances of colonic necrosis have been reported. Intestinal obstruction due to concretions of aluminum hydroxide, when used in combination with sodium polystyrene sulfonate, has been reported.

Biochemical disturbances resulting from overdosage may give rise to clinical signs and symptoms of hypokalemia, including: irritability, confusion, delayed thought processes, muscle weakness, hyporeflexia, which may progress to frank paralysis and/or apnea. Electrocardiographic changes may be consistent with hypokalemia or hypercalcemia; cardiac arrhythmias may occur. Appropriate measures should be taken to correct serum electrolytes (potassium, calcium), and the resin should be removed from the alimentary tract by appropriate use of laxatives or enemas.

Each dose should be given as a suspension in a small quantity of water or, for greater palatability, in syrup. The amount of fluid usually ranges from 20 to 100mL, depending on the dose, or may be simply determined by allowing 3 to 4 mL per gram resin.

The resin may also be given, although with less effective results, in an enema consisting (for adults) of 30 g to 50 g every six hours. Each dose is administered as a warm emulsion (at body temperature) in 100 mL of aqueous vehicle, such as sorbitol. The emulsion should be agitated gently during administration. The enema should be retained as long as possible and followed by a cleansing enema.

After an initial cleansing enema, a soft, large size (French 28) rubber tube is inserted into the rectum for a distance of about 20 cm, with the tip well into the sigmoid colon, and taped in place. The resin is then suspended in the appropriate amount of aqueous vehicle at body temperature and introduced by gravity, while the particles are kept in suspension by stirring. The suspension is flushed with 50 mL or 100 mL of fluid, following which the tube is clamped and left in place. If back leakage occurs, the hips are elevated on pillows or a knee-chest position is taken temporarily. A somewhat thicker suspension may be used, but care should be taken that no paste is formed, because the latter has a greatly reduced exchange surface and will be particularly ineffective if deposited in the rectal ampulla. The suspension is kept in the sigmoid colon for several hours, if possible. Then the colon is irrigated with nonsodium containing solution at body temperature in order to remove the resin. Two quarts of flushing solution may be necessary. The returns are drained constantly through a Y tube connection. Particular attention should be paid to this cleansing enema when sorbitol has been used.

Sodium Polystyrene Sulfonate should not be heated for to do so may alter the exchange properties of the resin.

Sodium Polystyrene Sulfonate is available as a cream to light brown, finely ground powder in jars of 1 pound. 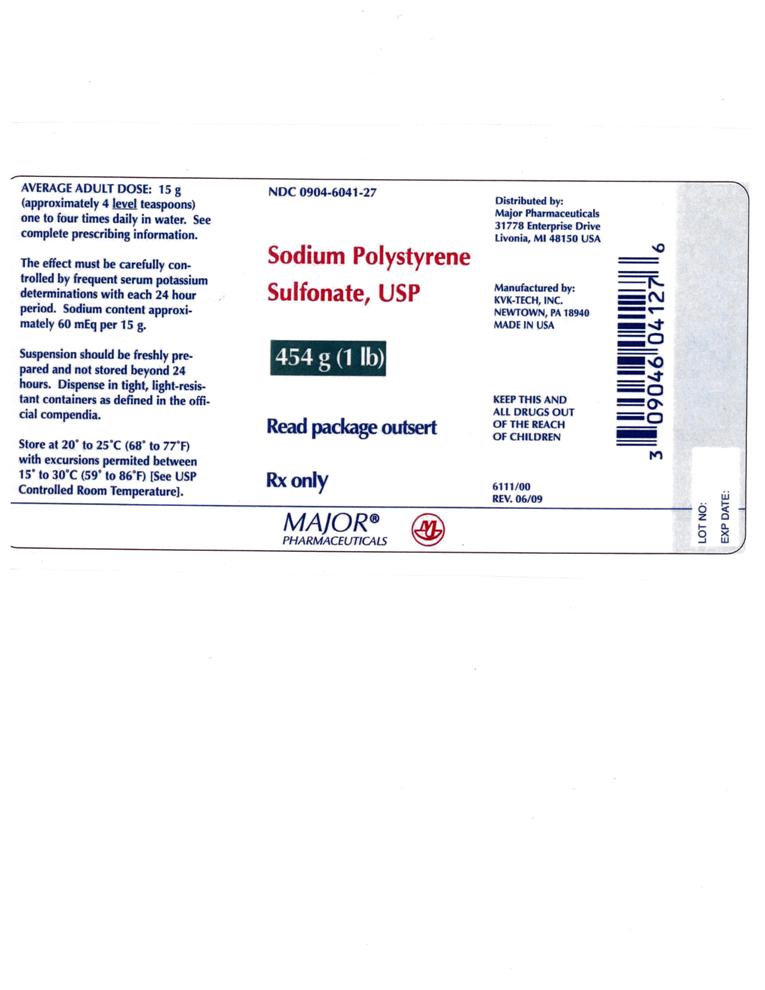