It is recommended that MATULANE be given only by or under the supervision of a physician experienced in the use of potent antineoplastic drugs. Adequate clinical and laboratory facilities should be available to patients for proper monitoring of treatment.

The precise mode of cytotoxic action of procarbazine has not been clearly defined. There is evidence that the drug may act by inhibition of protein, RNA and DNA synthesis. Studies have suggested that procarbazine may inhibit transmethylation of methyl groups of methionine into t-RNA. The absence of functional t-RNA could cause the cessation of protein synthesis and consequently DNA and RNA synthesis. In addition, procarbazine may directly damage DNA. Hydrogen peroxide, formed during the auto-oxidation of the drug, may attack protein sulfhydryl groups contained in residual protein which is tightly bound to DNA.

Procarbazine is metabolized primarily in the liver and kidneys. The drug appears to be auto-oxidized to the azo derivative with the release of hydrogen peroxide. The azo derivative isomerizes to the hydrazone, and following hydrolysis splits into a benzylaldehyde derivative and methylhydrazine. The methylhydrazine is further degraded to CO 2 and CH 4 and possibly hydrazine, whereas the aldehyde is oxidized to N-isopropylterephthalamic acid, which is excreted in the urine.

After intravenous injection, the plasma half-life of procarbazine is approximately 10 minutes. Approximately 70% of the radioactivity is excreted in the urine as N-isopropylterephthalamic acid within 24 hours following both oral and intravenous administration of 14C-labeled procarbazine.

Procarbazine crosses the blood-brain barrier and rapidly equilibrates between plasma and cerebrospinal fluid after oral administration.

Matulane is indicated for use in combination with other anticancer drugs for the treatment of Stage III and IV Hodgkin's disease. Matulane is used as part of the MOPP (nitrogen mustard, vincristine, procarbazine, prednisone) regimen.

Matulane is contraindicated in patients with known hypersensitivity to the drug or inadequate marrow reserve as demonstrated by bone marrow aspiration. Due consideration of this possible state should be given to each patient who has leukopenia, thrombocytopenia or anemia.

To minimize CNS depression and possible potentiation, barbiturates, antihistamines, narcotics, hypotensive agents or phenothiazines should be used with caution. Ethyl alcohol should not be used since there may be an Antabuse (disulfiram)-like reaction. Because Matulane exhibits some monoamine oxidase inhibitory activity, sympathomimetic drugs, tricyclic antidepressant drugs (eg, amitriptyline HCI, imipramine HCI) and other drugs and foods with known high tyramine content, such as wine, yogurt, ripe cheese and bananas, should be avoided. A further phenomenon of toxicity common to many hydrazine derivatives is hemolysis and the appearance of Heinz-Ehrlich inclusion bodies in erythrocytes.

Procarbazine hydrochloride has not been adequately studied in animals for its effects on peri- and postnatal development. However, neurogenic tumors were noted in the offspring of rats given intravenous injections of 125 mg/kg of procarbazine hydrochloride on day 22 of gestation. Compounds which inhibit DNA, RNA and protein synthesis might be expected to have adverse effects on peri- and postnatal development.

Procarbazine hydrochloride has been shown to be mutagenic in a variety of bacterial and mammalian test systems.

Undue toxicity may occur if Matulane is used in patients with impairment of renal and/or hepatic function. When appropriate, hospitalization for the initial course of treatment should be considered.

If radiation or a chemotherapeutic agent known to have marrow-depressant activity has been used, an interval of one month or longer without such therapy is recommended before starting treatment with Matulane. The length of this interval may also be determined by evidence of bone marrow recovery based on successive bone marrow studies.

Prompt cessation of therapy is recommended if any one of the following occurs:

Bone marrow depression often occurs 2 to 8 weeks after the start of treatment. If leukopenia occurs, hospitalization of the patient may be needed for appropriate treatment to prevent systemic infection.

Patients should be warned not to drink alcoholic beverages while on Matulane therapy since there may be an Antabuse (disulfiram)-like reaction. They should also be cautioned to avoid foods with known high tyramine content such as wine, yogurt, ripe cheese and bananas. Over-the-counter drug preparations which contain antihistamines or sympathomimetic drugs should also be avoided. Patients taking Matulane should also be warned against the use of prescription drugs without the knowledge and consent of their physician. Patients should be advised to discontinue tobacco use.

Baseline laboratory data should be obtained prior to initiation of therapy. The hematologic status as indicated by hemoglobin, hematocrit, white blood count (WBC), differential, reticulocytes and platelets should be monitored closely - at least every 3 or 4 days.

Hepatic and renal evaluation are indicated prior to beginning therapy. Urinalysis, transaminase, alkaline phosphatase and blood urea nitrogen tests should be repeated at least weekly.

No cross-resistance with other chemotherapeutic agents, radiotherapy or steroids has been demonstrated.

It is not known whether Matulane is excreted in human milk. Because of the potential for tumorigenicity shown for procarbazine hydrochloride in animal studies, mothers should not nurse while receiving this drug.

Undue toxicity, evidenced by tremors, coma and convulsions, has occurred in a few cases. Dosage, therefore, should be individualized (see DOSAGE AND ADMINISTRATION). Very close clinical monitoring is mandatory.

Leukopenia, anemia and thrombopenia occur frequently. Nausea and vomiting are the most commonly reported side effects.

Pain, including myalgia and arthralgia; tremors.

Second nonlymphoid malignancies (including lung cancer, acute myelocytic leukemia and malignant myelosclerosis) and azoospermia have been reported in patients with Hodgkin's disease treated with procarbazine in combination with other chemotherapy and/or radiation. The risks of secondary lung cancer from treatment appear to be multiplied by tobacco use.

The major manifestations of overdosage with Matulane would be anticipated to be nausea, vomiting, enteritis, diarrhea, hypotension, tremors, convulsions and coma. Treatment should consist of either the administration of an emetic or gastric lavage. General supportive measures such as intravenous fluids are advised. Since the major toxicity of procarbazine hydrochloride is hematologic and hepatic, patients should have frequent complete blood counts and liver function tests throughout their period of recovery and for a minimum of two weeks thereafter. Should abnormalities appear in any of these determinations, appropriate measures for correction and stabilization should be immediately undertaken.

The estimated mean lethal dose of procarbazine hydrochloride in laboratory animals varied from approximately 150 mg/kg in rabbits to 1300 mg/kg in mice.

The following doses are for administration of the drug as a single agent. When used in combination with other anticancer drugs, the Matulane dose should be appropriately reduced, eg, in the MOPP regimen, the Matulane dose is 100 mg/m 2 daily for 14 days. All dosages are based on the patient's actual weight. However, the estimated lean body mass (dry weight) is used if the patient is obese or if there has been a spurious weight gain due to edema, ascites or other forms of abnormal fluid retention.

Adults: To minimize the nausea and vomiting experienced by a high percentage of patients beginning Matulane therapy, single or divided doses of 2 to 4 mg/kg/day for the first week are recommended. Daily dosage should then be maintained at 4 to 6 mg/kg/day until maximum response is obtained or until the white blood count falls below 4000/cmm or the platelets fall below 100,000/cmm. When maximum response is obtained, the dose may be maintained at 1 to 2 mg/kg/day. Upon evidence of hematologic or other toxicity (see PRECAUTIONS section), the drug should be discontinued until there has been satisfactory recovery. After toxic side effects have subsided, therapy may then be resumed at the discretion of the physician, based on clinical evaluation and appropriate laboratory studies, at a dosage of 1 to 2 mg/kg/day.

Pediatric Patients: Very close clinical monitoring is mandatory. Undue toxicity, evidenced by tremors, coma and convulsions, has occurred in a few cases. Dosage, therefore, should be individualized. The following dosage schedule is provided as a guideline only.

Procedures for proper handling and disposal of anticancer drugs should be considered. Several guidelines on this subject have been published. 1-6 There is no general agreement that all of the procedures recommended in the guidelines are necessary or appropriate.

Capsules, ivory, containing the equivalent of 50 mg procarbazine as the hydrochloride; in bottles of 100 (NDC 54482-053-01). Imprint on capsules: MATULANE σ sigma-tau. 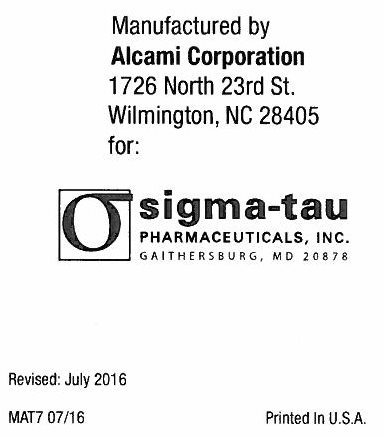 Each capsule contains 50 mg procarbazine
in the form of the hydrochloride salt.

Dispense in tight, light-resistant containers as
defined in USP/NF.