Aktipak®
(erythromycin and benzoyl peroxide) Gel, 3%/5%
For Dermatological Use Only – Not for Ophthalmic Use

Chemically, erythromycin is (C37H67NO13). It has the following structural formula: 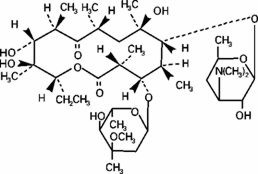 Erythromycin has the molecular weight of 733.94. It is a white crystalline powder and has a solubility of approximately 1 mg/mL in water and is soluble in alcohol at 25°C.

Chemically, benzoyl peroxide is (C14H10O4). It has the following structural formula:

Each gram of product, as dispensed, contains 30 mg of erythromycin and 50 mg of benzoyl peroxide in a base of SD Alcohol 40B, purified water, hydroxypropyl cellulose, Carbomer Homopolymer Type B, sodium hydroxide, dioctyl sodium sulfosuccinate 75%. Each Aktipak® contains 0.8 grams of product.

Benzoyl peroxide has been shown to be absorbed by the skin where it is converted to benzoic acid. A single dose pharmacokinetic study, involving the application of either one or three units of Aktipak﻿®, was performed in 16 adult acne patients to determine systemic absorption of erythromycin. Erythromycin (with a plasma lower limit of quantitation of 2 ng/ml) was not detectable, except in one patient who was in the one unit application group.

The exact mechanism by which erythromycin and benzoyl peroxide reduce lesions of acne vulgaris is not fully known.

In two adequate and well controlled clinical studies 228 patients used Aktipak﻿®, 113 patients used the currently marketed Benzamycin Topical Gel, and 183 patients used vehicle. Aktipak® applied twice daily for 8 weeks was significantly more effective than vehicle and comparable to Benzamycin Topical Gel in the treatment of moderate to moderately severe facial acne vulgaris. Patients entering the study had a minimum of 15 and a maximum of 80 facial inflammatory lesions (papules and pustules) and a minimum of 20 and a maximum of 140 facial non-inflammatory lesions (open and closed comedones). The primary efficacy measures evaluated at week 8 were the lesion counts and the investigator's global assessment.

Patients were instructed to wash their face twice daily (morning and evening) with warm water and a mild cleanser provided by sponsor. No abrasive cloths or sponges, alcoholic toners, astringents or medicated solutions were used. The medication was to be applied 15 minutes after washing, in a thin film over the entire facial area. A moisturizer (supplied by the sponsor) or non-medicated make-up could be applied one hour after application, as needed. All medications were to be kept away from the eyes. Sun exposure to the face was to be limited.

Outcomes for mean percent reductions in lesion counts and investigator's global assessment after 8 weeks of treatment are shown below:

Erythromycin acts by inhibition of protein synthesis in susceptible organisms by reversibly binding to 50 S ribosomal subunits, thereby inhibiting translocation of aminoacyl transfer-RNA and inhibiting polypeptide synthesis. Antagonism has been demonstrated in vitro between erythromycin, lincomycin, chloramphenicol and clindamycin.

Benzoyl peroxide has been shown to be effective in vitro against Propionibacterium acnes, an anaerobe found in sebaceous follicles and comedones. Benzoyl peroxide is believed to act by releasing active oxygen.

Aktipak﻿® is indicated for the topical treatment of acne vulgaris.

Aktipak﻿® is contraindicated in those individuals who have shown hypersensitivity to any of its components.

The use of antibiotic agents may be associated with the overgrowth of nonsusceptible organisms. If this occurs, discontinue use and take appropriate measures.

Patients using Aktipak﻿® should receive the following information and instructions:

1.   Patients should be informed that they will need to mix this medication prior to use. The medication will be dispensed in one foil pouch which contains medication in two separated compartments.
2.   The contents must be mixed thoroughly by the patient (in the palm of the hand), prior to application.
3.   Patients should apply the product immediately after mixing, then the hands should be washed.
4.   Do not mix or apply near an open flame.
5.   Aktipak® may bleach hair or colored fabric.
6.   Excessive or prolonged exposure to sunlight should be limited. To minimize exposure to sunlight, a hat or other clothing should be worn.
7.   This medication is to be used as directed by a physician. It is for external use only. Avoid contact with the eyes, mouth, and all mucous membranes as this product may be irritating.
8.   Patients should report to their physician any signs of local adverse reactions.
9.   This medication should not be used for any disorder other than that for which it was prescribed.
10. Patients should not use any other topical acne preparation unless otherwise directed by physician.
11. Patients should be instructed to review the instructions for use on the product carton.
12. This medication should be stored at room temperature away from heat and any open flame.

The combination of benzoyl peroxide and erythromycin in Aktipak﻿® has not been evaluated for its carcinogenic or mutagenic potential or for its effects on fertility.

Benzoyl peroxide has been shown to be a tumor promoter and progression agent in a number of animal studies. The clinical significance of this is unknown.

Benzoyl peroxide in acetone at doses of 5 and 10 mg administered twice per week induced skin tumors in transgenic Tg.AC mice in a study using 20 weeks of topical treatment.

Benzoyl peroxide has been found to cause DNA strand breaks in a variety of mammalian cell types, to be mutagenic in Salmonella typhimurium tests by some but not all investigators, and to cause sister chromatid exchanges in Chinese hamster ovary cells.

There was no apparent effect on male or female fertility in rats fed erythromycin base at levels up to 0.25% of diet.

Animal reproduction studies have not been conducted with Aktipak® or benzoyl peroxide.

Safety and effectiveness of this product in pediatric patients below 12 years of age have not been established.

During clinical trials, 550 acne patients were studied. Of these patients, 236 were treated with Aktipak﻿®. The most frequently reported adverse event considered at least possibly related was dry skin (7.6%) as compared to Vehicle (3.9%). Application site reactions (stinging, burning sensation, tingling, erythema) were reported in 2.5% of patients versus 1.3% of Vehicle patients. Blepharitis, pruritus and photosensitivity reactions were reported in <2% of patients who used the dual pouch product.

Aktipak﻿® requires thorough mixing by the patient immediately prior to each use. The medication should be applied twice daily, morning and evening, or as directed by a physician, to affected areas after the skin is thoroughly washed, rinsed with warm water and gently patted dry.

Keep away from heat and any open flame.

Not for oral, ophthalmic, or intravaginal use 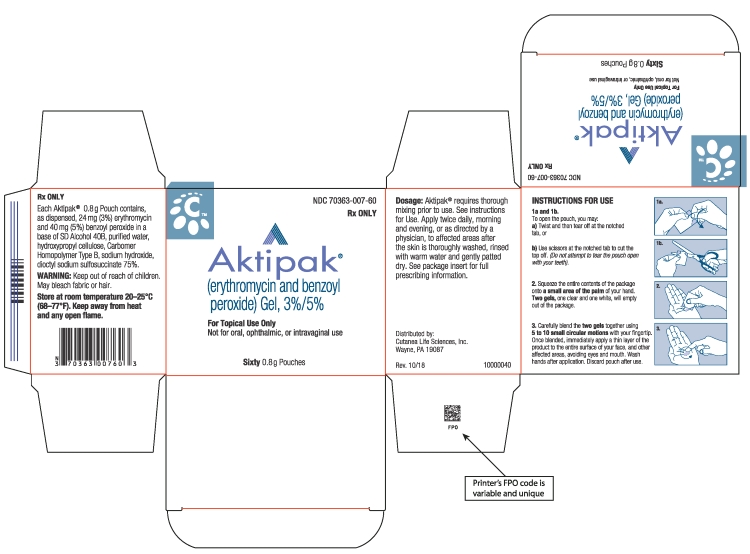