The structural formula of terconazole is as follows:

Terconazole, a triazole derivative, is a white to almost white powder with a molecular weight of 532.47. It is insoluble in water; sparingly soluble in ethanol; and soluble in butanol.

Terconazole is highly protein bound (94.9%) in human plasma and the degree of binding is independent of drug concentration over the range of 0.01 to 5.0 mcg/mL.

Across various studies in healthy women, after single or multiple intravaginal administration of terconazole as the cream or suppository/ovule, the mean elimination half-life of unchanged terconazole ranged from 6.4 to 8.5 hours. Following a single intravaginal administration of a suppository containing 240 mg 14C-terconazole to hysterectomized or tubal ligated women, approximately 3 to 10% (mean ± SD: 5.7 ± 3.0%) of the administered radioactivity was eliminated in the urine and 2 to 6% (mean ± SD: 4.2 ± 1.6%) was eliminated in the feces during the 7-day collection period.

There is no significant increase in maximum plasma concentration or overall exposure (AUC) after multiple daily applications of the cream for 7 days or suppositories for 3 days.

Photosensitivity reactions were observed in some normal volunteers following repeated dermal application of terconazole 2.0% and 0.8% creams under conditions of filtered artificial ultraviolet light.

Photosensitivity reactions have not been observed in U.S. and foreign clinical trials in patients who were treated with terconazole suppositories or vaginal cream (0.4% and 0.8%).

Terconazole, an azole antifungal agent, inhibits fungal cytochrome P-450-mediated 14 alpha-lanosterol demethylase enzyme. This enzyme functions to convert lanosterol to ergosterol. The accumulation of 14 alpha-methyl sterols correlates with the subsequent loss of ergosterol in the fungal cell wall and may be responsible for the antifungal activity of terconazole. Mammalian cell demethylation is less sensitive to terconazole inhibition.

Terconazole exhibits antifungal activity in vitro against Candida albicans and other Candida species. The MIC values of terconazole against most Lactobacillus spp. typically found in the human vagina were ≥128 mcg/mL; therefore these beneficial bacteria are not affected by drug treatment.

Terconazole Vaginal Cream is indicated for the local treatment of vulvovaginal candidiasis (moniliasis). As this product is effective only for vulvovaginitis caused by the genus Candida, the diagnosis should be confirmed by KOH smears and/or cultures.

Patients known to be hypersensitive to terconazole or to any of the components of the cream.

For vulvovaginal use only. Terconazole is not for ophthalmic or oral use.

Discontinue use and do not retreat with terconazole if sensitization, irritation, fever, chills or flu-like symptoms are reported during use.

If there is lack of response to terconazole, appropriate microbiologic studies (standard KOH smear and/or cultures) should be repeated to confirm the diagnosis and rule out other pathogens.

The therapeutic effect of terconazole is not affected by oral contraceptive usage.

The levels of estradiol and progesterone did not differ significantly when 0.8% terconazole vaginal cream was administered to healthy female volunteers established on a low dose oral contraceptive.

Studies to determine the carcinogenic potential of terconazole have not been performed.

Terconazole was not mutagenic when tested in vitro for induction of microbial point mutations (Ames test), or for inducing cellular transformation, or in vivo for chromosome breaks (micronucleus test) or dominant lethal mutations in mouse germ cells.

No impairment of fertility occurred when female rats were administered terconazole orally up to 40 mg/kg/day for a three month period.

Dosages at or below 10 mg/kg/day produced no embryotoxicity; however, there was a delay in fetal ossification at 10 mg/kg/day in rats. There was some evidence of embryotoxicity in rabbits and rats at 20–40 mg/kg. In rats, this was reflected as a decrease in litter size and number of viable young and reduced fetal weight. There was also delay in ossification and an increased incidence of skeletal variants.

Since terconazole is absorbed from the human vagina, it should not be used in the first trimester of pregnancy unless the physician considers it essential to the welfare of the patient.

Terconazole may be used during the second and third trimester if the potential benefit outweighs the possible risks to the fetus.

It is not known whether this drug is excreted in human milk. Animal studies have shown that rat offspring exposed via the milk of treated (40 mg/kg/orally) dams showed decreased survival during the first few post-partum days, but overall pup weight and weight gain were comparable to or greater than controls throughout lactation. Because many drugs are excreted in human milk, and because of the potential for adverse reaction in nursing infants from terconazole, a decision should be made whether to discontinue nursing or to discontinue the drug, taking into account the importance of the drug to the mother.

Safety and efficacy in children have not been established.

Clinical studies of terconazole did not include sufficient numbers of subjects aged 65 and over to determine whether they respond differently from younger subjects. Other reported clinical experience has not identified differences in responses between the elderly and younger patients.

The following adverse drug reactions have been first identified during post-marketing experience with terconazole. Because these reactions are reported voluntarily from a population of uncertain size, it is not always possible to reliably estimate their frequency or establish a causal relationship to drug exposure.

In the event of oral ingestion of cream, supportive and symptomatic measures should be carried out. If the cream is accidentally applied to the eyes, wash with clean water or saline and seek medical attention if symptoms persist.

One full applicator (5 g) of Terconazole Vaginal Cream (20 mg terconazole) should be administered intravaginally once daily at bedtime for seven consecutive days.

One full applicator (5 g) of Terconazole Vaginal Cream (40 mg terconazole) should be administered intravaginally once daily at bedtime for three consecutive days.

Before prescribing another course of therapy, the diagnosis should be reconfirmed by smears and/or cultures and other pathogens commonly associated with vulvovaginitis ruled out. The therapeutic effect of these products is not affected by menstruation.

1.
Remove the cap from the tube.

2.
Use the pointed tip on the top of the cap to puncture the seal on the tube.
3.
Screw the applicator onto the tube. 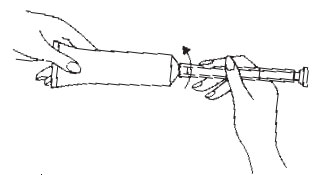 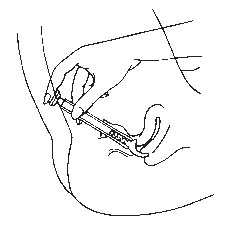 4.
Remove the applicator from the vagina.
5.
Apply one applicatorful each night for as many days at bedtime, as directed by your doctor.

After each use, you should thoroughly clean the applicator by following the procedure below:

1.
Pull the plunger out of the barrel.

2.
Wash the pieces with lukewarm, soapy water, and dry them thoroughly.
3.
Put the applicator back together by gently pushing the plunger into the barrel as far as it will go.

A WORD ABOUT YEAST INFECTIONS

Why do yeast infections occur?

Yeast infections are caused by an organism called Candida (KAN di duh). It may be present in small and harmless amounts in the mouth, digestive tract, and vagina. Sometimes the natural balance of the vagina becomes upset. This may lead to rapid growth of Candida, which results in a yeast infection. Symptoms of a yeast infection include itching, burning, redness, and an abnormal discharge.

Your doctor can make the diagnosis of a yeast infection by evaluating your symptoms and looking at a sample of the discharge under the microscope.

How can I prevent yeast infections?

Certain factors may increase your chance of developing a yeast infection. These factors don't actually cause the problem, but they may create a situation that allows the yeast to grow rapidly.

Controlling these factors can help eliminate yeast infections and may prevent them from coming back.

Some other helpful tips:

1.
For best results, be sure to use the medication as prescribed by your doctor, even if you feel better quickly.
2.
Avoid sexual intercourse, if your doctor advises you to do so.
3.
If your partner has any penile itching, redness, or discomfort, he should consult his physician and mention that you are being treated for a yeast infection.
4.
You can use the medication even if you are having your menstrual period. However, you should not use tampons because they may absorb the medication. Instead, use external pads or napkins until you have finished your medication. You may also wish to wear a sanitary napkin if the vaginal medication leaks.
5.
Dry the genital area thoroughly after showering, bathing, or swimming. Change out of a wet bathing suit or damp exercise clothes as soon as possible. A dry environment is less likely to encourage the growth of yeast.
6.
Wipe from front to rear (away from the vagina) after a bowel movement.
7.
Don't douche unless your doctor specifically tells you to do so. Douching may disturb the vaginal balance.
8.
Don't scratch if you can help it. Scratching can cause more irritation and spread the infection.
9.
Discuss with your physician any medication you are already taking. Certain types of medication can make your vagina more susceptible to infection.
10.
Eat nutritious meals to promote your general health.

Tube and Applicator
For Vaginal Use Only. 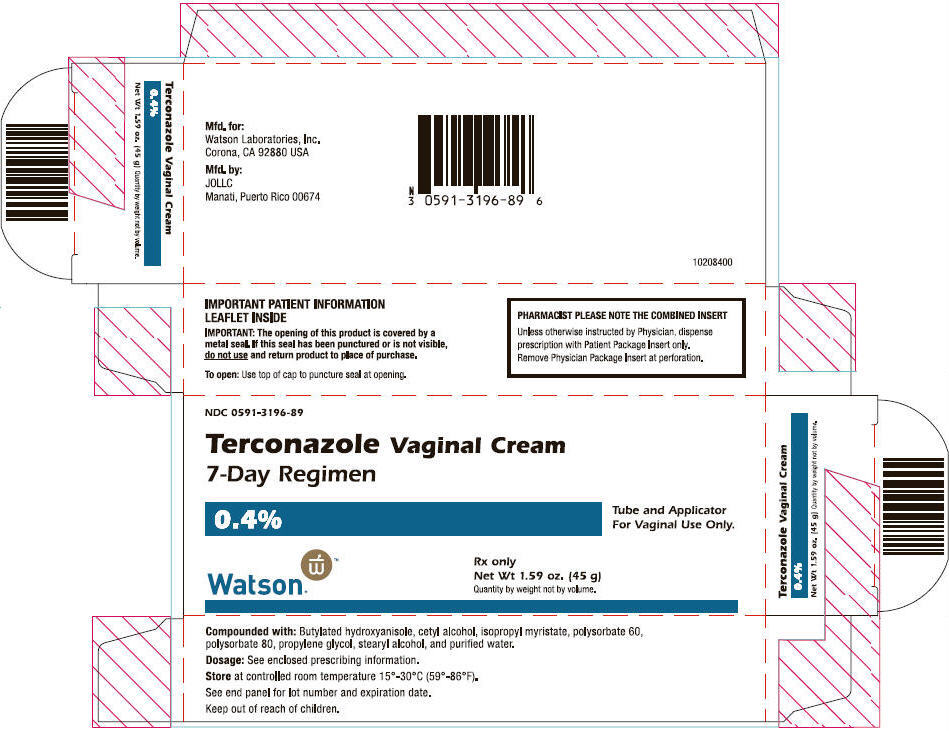 Tube and Applicator
For Vaginal Use Only. 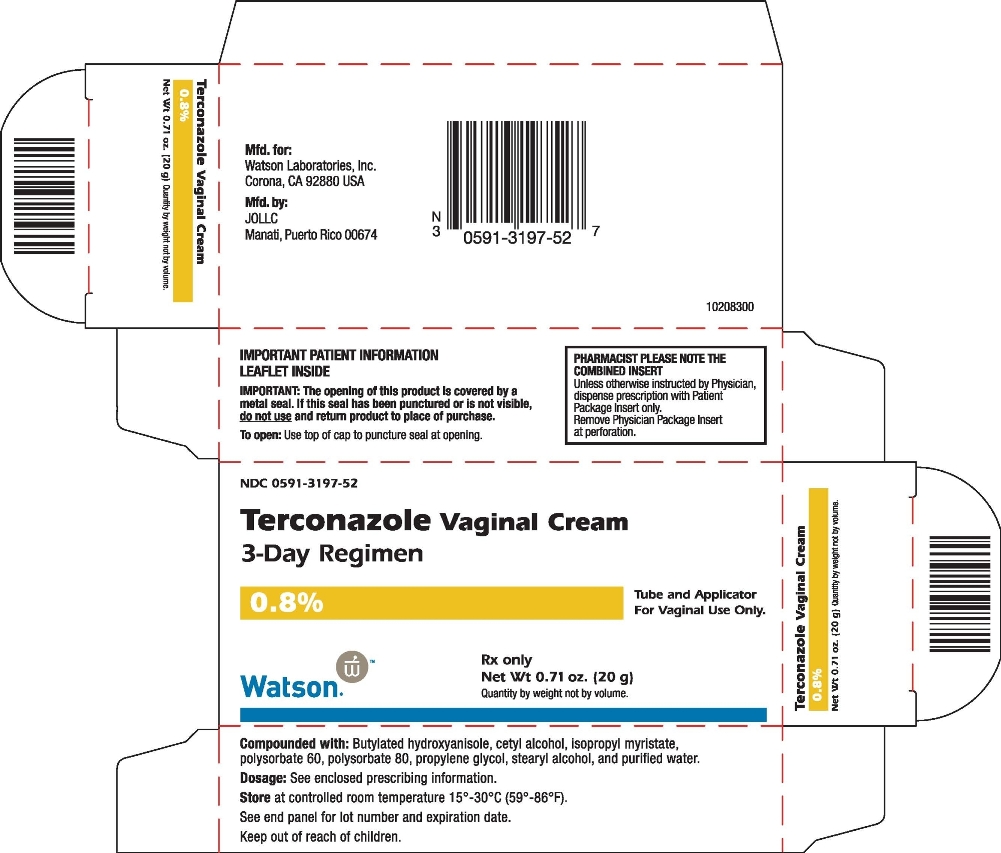