Each opaque gelcap with a blue cap and white body is spin printed in blue and white ink with “PhosLo®” printed on the cap and “667 mg” printed on the body. Each gelcap contains 667 mg calcium acetate, USP (anhydrous; Ca(CH3COO)2; MW=158.17 grams) equal to 169 mg (8.45 mEq) calcium, and 10 mg of the inert binder, polyethylene glycol 8000 NF. The gelatin cap and body have the following inactive ingredients: FD&C blue #1, D&C red #28, titanium dioxide, USP and gelatin, USP.

Patients with advanced renal insufficiency (creatinine clearance less than 30 ml/min) exhibit phosphate retention and some degree of hyperphosphatemia. The retention of phosphate plays a pivotal role in causing secondary hyperparathyroidism associated with osteodystrophy, and soft-tissue calcification. The mechanism by which phosphate retention leads to hyperparathyroidism is not clearly delineated. Therapeutic efforts directed toward the control of hyperphosphatemia include reduction in the dietary intake of phosphate, inhibition of absorption of phosphate in the intestine with phosphate binders, and removal of phosphate from the body by more efficient methods of dialysis. The rate of removal of phosphate by dietary manipulation or by dialysis is insufficient. Dialysis patients absorb 40% to 80% of dietary phosphorus. Therefore, the fraction of dietary phosphate absorbed from the diet needs to be reduced by using phosphate binders in most renal failure patients on maintenance dialysis. Calcium acetate (PhosLo) when taken with meals, combines with dietary phosphate to form insoluble calcium phosphate which is excreted in the feces. Maintenance of serum phosphorus below 6.0 mg/dl is generally considered as a clinically acceptable outcome of treatment with phosphate binders. PhosLo is highly soluble at neutral pH, making the calcium readily available for binding to phosphate in the proximal small intestine.

PhosLo is indicated for the control of hyperphosphatemia in end stage renal failure and does not promote aluminum absorption.

Patients with end stage renal failure may develop hypercalcemia when given calcium with meals. No other calcium supplements should be given concurrently with PhosLo.

Progressive hypercalcemia due to overdose of PhosLo may be severe as to require emergency measures. Chronic hypercalcemia may lead to vascular calcification, and other soft-tissue calcification. The serum calcium level should be monitored twice weekly during the early dose adjustment period. The serum calcium times phosphate(CaXP) product should not be allowed to exceed 66. Radiographic evaluation of suspect anatomical region may be helpful in early detection of soft tissue calcification.

Excessive dosage of PhosLo induces hypercalcemia; therefore, early in the treatment during dosage adjustment serum calcium should be determined twice weekly. Should hypercalcemia develop, the dosage should be reduced or the treatment discontinued immediately depending on the severity of hypercalcemia. PhosLo should not be given to patients on digitalis, because hypercalcemia may precipitate cardiac arrhythmias. PhosLo therapy should always be started at low dose and should not be increased without careful monitoring of serum calcium. An estimate of daily calcium intake should be made initially and the intake adjusted as needed. Serum phosphorus should also be determined periodically.

PhosLo may decrease the bioavailability of tetracyclines.

Long term animal studies have not been performed to evaluate the carcinogenic potential, mutagenicity, or effect on fertility of PhosLo.

Of the total number of subjects in clinical studies of PhosLo (n=91), 25 percent were 65 and over, while 7 percent were 75 and over. No overall differences in safety or effectiveness were observed between these subjects and younger subjects, and other reported clinical experience has not identified differences in responses between the elderly and younger patients, but greater sensitivity of some older individuals cannot be ruled out.

In clinical studies, patients have occasionally experienced nausea during PhosLo therapy. Hypercalcemia may occur during treatment with PhosLo. Mild hypercalcemia (Ca>10.5mg/dl) may be asymptomatic or manifest itself as constipation, anorexia, nausea and vomiting. More severe hypercalcemia (Ca>12mg/dl) is associated with confusion, delirium, stupor and coma. Mild hypercalcemia is easily controlled by reducing the PhosLo dose or temporarily discontinuing therapy. Severe hypercalcemia can be treated by acute hemodialysis and discontinuing PhosLo therapy. Decreasing dialysate calcium concentration could reduce the incidence and severity of PhosLo induced hypercalcemia. The long-term effect of PhosLo on the progression of vascular or soft tissue calcification has not been determined.

Isolated cases of pruritus have been reported which may represent allergic reactions.

Administration of PhosLo in excess of the appropriate daily dosage can cause severe hypercalcemia (see ADVERSE REACTIONS section).

PHOSLO 667 mg gelcaps are available from Cardinal Health in unit dose packages of 200. 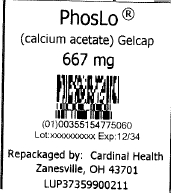 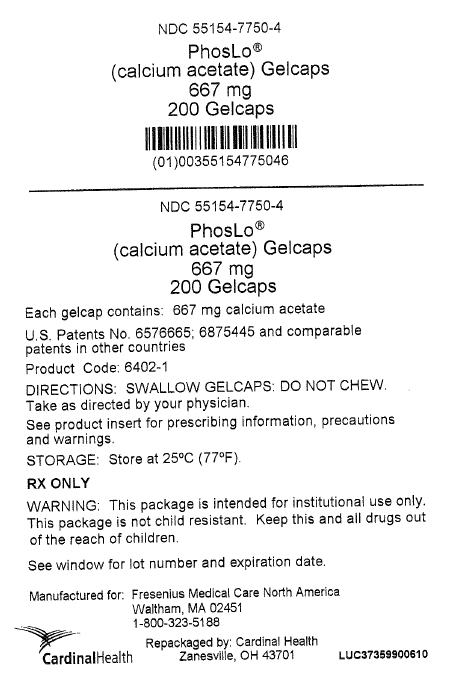 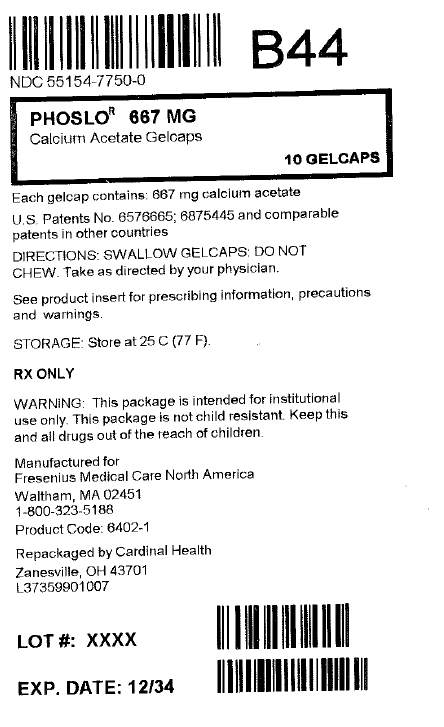