Kionexis indicated for the treatment of hyperkalemia.

Kionex should not be used as an emergency treatment for life-threatening hyperkalemia because of its delayed onset of action [see Clinical Pharmacology (12.2)].

Administer Kionex at least 3 hours before or 3 hours after other oral medications. Patients with gastroparesis may require a 6 hour separation [see Warnings and Precautions (5.5) and Drug Interaction (7)]

The average total daily adult dose of Kionex is 15 g to 60 g, administered as a 15-g dose (four level teaspoons), one to four times daily.

Prepare suspension fresh and use within 24 hours.

Do not heat Kionex as it could alter the exchange properties of the resin.

One level teaspoon contains approximately 3.5 g of Kionex and 15 mEq of sodium.

Suspend each dose in a small quantity of water or syrup, approximately 3 to 4 mL of liquid per gram of resin. Administer with patient in an upright position [see Warnings and Precautions (5.4)].

After an initial cleansing enema, insert a soft, large size (French 28) rubber tube into the rectum for a distance of about 20 cm, with the tip well into the sigmoid colon, and tape in place.

Administer as a warm (body temperature) emulsion in 100 mL of aqueous vehicle and flush with 50 to 100 ml of fluid. A somewhat thicker suspension may be used, but do not form a paste.

Agitate the emulsion gently during administration. The resin should be retained for as long as possible and follow by a cleansing enema with a nonsodium containing solution. Ensure an adequate volume of cleansing solution (up to 2 liters) is utilized.

Kionex is a cream to light brown, finely ground powder and is available in 454 g jars.

Kionex is contraindicated in patients with the following conditions:

Cases of intestinal necrosis, some fatal, and other serious gastrointestinal adverse events (bleeding, ischemic colitis, perforation) have been reported in association with Kionex use. The majority of these cases reported the concomitant use of sorbitol. Risk factors for gastrointestinal adverse events were present in many of the cases including prematurity, history of intestinal disease or surgery, hypovolemia, and renal insufficiency and failure. Concomitant administration of sorbitol is not recommended.

Monitor serum potassium during therapy because severe hypokalemia may occur.

Kionex is not totally selective for potassium, and small amounts of other cations such as magnesium and calcium can also be lost during treatment. Monitor calcium and magnesium in patients receiving Kionex.

Each 15 g dose of Kionex contains 1500 mg (60 mEq) of sodium. Monitor patients who are sensitive to sodium intake (heart failure, hypertension, edema) for signs of fluid overload. Adjustment of other sources of sodium may be required.

Cases of acute bronchitis or bronchopneumonia caused by inhalation of sodium polystyrene sulfonate particles have been reported. Patients with impaired gag reflex, altered level of consciousness, or patients prone to regurgitation may be at increased risk. Administer Kionex with the patient in an upright position.

5.5 Binding to Other Orally Administered Medications

Kionex may bind orally administered medications, which could decrease their gastrointestinal absorption and lead to reduced efficacy. Administer other oral medications at least 3 hours before or 3 hours after Kionex. Patients with gastroparesis may require a 6 hour separation. [see Dosage and Administration (2.1) and Drug Interactions (7)].

The following adverse reactions are discussed elsewhere in the labeling:

The following adverse reactions have been identified during post-approval use of Kionex. Because these reactions are reported voluntarily from a population of uncertain size, it is not always possible to estimate their frequency reliably or establish a causal relationship to drug exposure.

No formal drug interaction studies have been conducted in humans.

Kionex has the potential to bind other drugs. In in vitro binding studies, Kionex was shown to significantly bind the oral medications (n=6) that were tested. Decreased absorption of lithium and thyroxine have also been reported with co-administration of Kionex. Binding of Kionex to other oral medications could cause decreased gastrointestinal absorption and loss of efficacy when taken close to the time Kionex is administered. Administer Kionex at least 3 hours before or 3 hours after other oral medications. Patients with gastroparesis may require a 6 hour separation. Monitor for clinical response and/or blood levels where possible.

The simultaneous oral administration of Kionex with nonabsorbable cation-donating antacids and laxatives may reduce the resin's potassium exchange capability and increase the risk of systemic alkalosis.

Sorbitol may contribute to the risk of intestinal necrosis [see Warnings and Precautions (5.1)] and concomitant use is not recommended.

Kionex is not absorbed systemically following oral or rectal administration and maternal use is not expected to result in fetal risk.

Kionex is not absorbed systemically by the mother, so breastfeeding is not expected to result in risk to the infant.

Studies of safety and efficacy have not been conducted in pediatric patients.

In pediatric patients, as in adults, Kionex is expected to bind potassium at the practical exchange ratio of 1mEq potassium per 1 gram of resin.

In neonates, Kionex should not be given by the oral route. In both children and neonates, excessive dosage or inadequate dilution could result in impaction of the resin. Premature infants or low birth weight infants may have an increased risk for gastrointestinal adverse effects with Kionex. use [see Warnings and Precautions (5.4)].

Overdosage may result in electrolyte disturbances including hypokalemia, hypocalcemia, and hypomagnesemia. Appropriate measures should be taken to correct serum electrolytes (potassium, calcium, magnesium), and the resin should be removed from the alimentary tract by appropriate use of laxatives or enemas.

Kionex is a benzene, diethenyl-polymer, with ethenylbenzene, sulfonated, sodium salt and has the following structural formula: 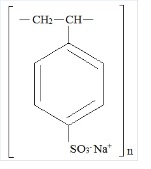 The drug is a cream to light brown finely ground, powdered form of sodium polystyrene sulfonate, a cation-exchange resin prepared in the sodium phase with an in vitro exchange capacity of approximately 3.1 mEq (in vivo approximately 1 mEq) of potassium per gram. The sodium content is approximately 100 mg (4.1 mEq) per gram of the drug. It can be administered orally or rectally as an enema.

One gram of Kionex contains 4.1 mEq of sodium.

Kionex is a non-absorbed, cation exchange polymer that contains a sodium counterion.

As the resin passes along the intestine or is retained in the colon after administration by enema, the sodium ions are partially released and are replaced by potassium ions. This action occurs primarily in the large intestine, which excretes potassium ions to a greater degree than does the small intestine. The efficiency of this process is limited and unpredictably variable.

The effective lowering of serum potassium with Kionex may take hours to days.

The in vivo efficiency of sodium-potassium exchange resins is approximately 33 percent; hence, about one third of the resin's actual sodium content is delivered to the body.

Kionex is not absorbed systemically.

Advise patients who are taking other oral medication to separate the dosing of Kionex by at least 3 hours (before or after) [see Dosage and Administration (2.1), Warnings and Precautions (5.5), and Drug Interactions (7.1)]

The effect must be carefully controlled by frequent serum potassium determinations within each 24 hour period. Sodium content approximately 60 mEq per 15 g.

Suspension should be freshly prepared and not stored beyond 24 hours. Dispense in tight, light-resistant containers as defined in the USP. 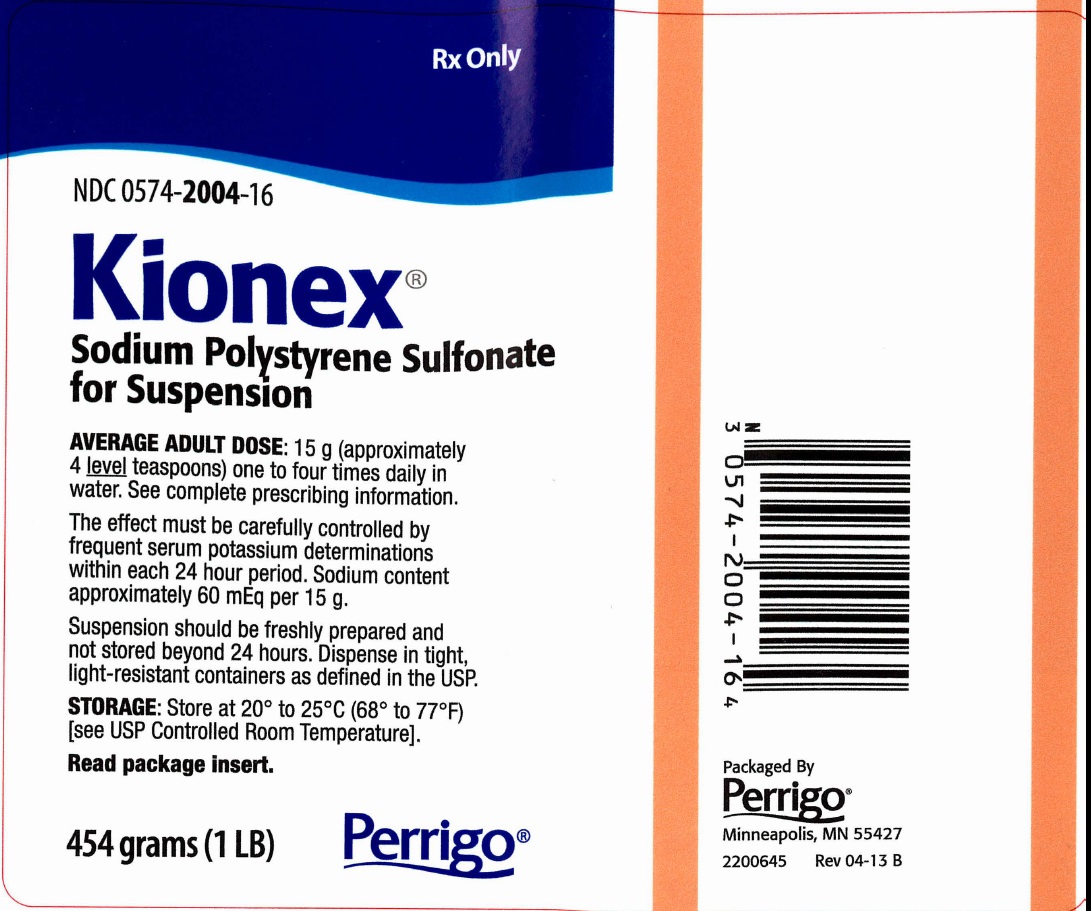