Butalbital, 5-allyl-5-isobutyl-barbituric acid, a white odorless crystalline powder; is a short-to intermediate-acting barbiturate. Its structural formula is as follows: 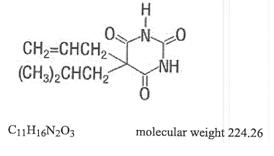 Aspirin, salicylic acid acetate, is a non-opiate analgesic, anti-inflammatory and antipyretic agent. It occurs as a white, crystalline tabular or needle-like powder and is odorless or has a faint odor. Its structural formula is as follows:

Caffeine, 1,3,7-trimethylxanthine, is a central nervous system stimulant which occurs as a white powder or white glistening needles. It also has a bitter taste. Its structural formula is as follows:

The systemic availability of aspirin after an oral dose is highly dependent on the dosage form, the presence of food, the gastric emptying time, gastric pH, antacids, buffering agents, and particle size. These factors affect not necessarily the extent of absorption of total salicylates but more the stability of aspirin prior to absorption.

During the absorption process and after absorption, aspirin mainly hydrolyzed to salicylic acid and distributed to all body tissues and fluids, including fetal tissues, breast milk, and the central nervous system (CNS). Highest concentrations are found in plasma, liver, renal cortex, heart, and lung. In plasma, about 50%-80% of the salicylic acid and its metabolites are loosely bound to plasma proteins.

The elimination of therapeutic doses is through the kidneys either as salicylic acid or other biotransformation products. The renal clearance is greatly augmented by an alkaline urine as is produced by concurrent administration of sodium bicarbonate or potassium citrate.

The biotransformation of aspirin occurs primarily in the hepatocytes. The major metabolites are salicyluric acid (75%), the phenolic and acyl glucuronides of salicylate (15%), and gentisic and gentisuric acid (1%). The bioavailability of the aspirin component butalbital, aspirin, and caffeine is equivalent to that of a solution except for a slower rate of absorption. A peak concentration of 8.80 mcg/mL was obtained at 40 minutes after a 650 mg dose. (see OVERDOSAGE for toxicity information).

Butalbital is well absorbed from the gastrointestinal tract and is expected to distribute to most of the tissues in the body. Barbiturates, in general, may appear in breast milk and readily cross the placental barrier. They are bound to plasma and tissue proteins to a varying degree and binding increases directly as a function of lipid solubility.

The bioavailability of the butalbital component of butalbital, aspirin, and caffeine is equivalent to that of a solution except for a decrease in the rate of absorption. A peak concentration of 2020 ng/mL is obtained at about 1.5 hours after a 100 mg dose.

The in vitro plasma protein binding of butalbital is 45% over the concentration range of 0.5 to 20 mcg/mL. This falls within the range of plasma protein binding (20% to 45%) reported with other barbiturates such as phenobarbital, pentobarbital, and secobarbital sodium.  The plasma-to-blood concentration ratio was almost unity indicating that there is no preferential distribution of butalbital into either plasma or blood cells. (see OVERDOSAGE for toxicity information).

Caffeine is cleared rapidly through metabolism and excretion in the urine. The plasma half-life is about 3.0 hours. Hepatic biotransformation prior to excretion results in about equal amounts of 1-methyl-xanthine and 1-methyluric acid. Of the 70% of the dose that has been recovered in the urine, only 3% was unchanged drug.

The bioavailability of the caffeine component for butalbital, aspirin, and caffeine is equivalent to that of a solution except for a slightly longer time to peak. A peak concentration of 1660 ng/mL was obtained in less than an hour for an 80 mg dose (see OVERDOSAGE for toxicity information).

Butalbital, Aspirin, and Caffeine Tablets, USP are indicated for the relief of the symptom complex of tension (or muscle contraction) headache.

Evidence supporting the efficacy and safety of butalbital, aspirin, and caffeine in the treatment of multiple recurrent headaches is unavailable. Caution in this regard is required because butalbital is habit-forming and potentially abusable.

Hypersensitivity to aspirin, caffeine, or barbiturates. Patients with porphyria.

Prolonged use of barbiturates can produce drug dependence, characterized by psychic dependence, and less frequently, physical dependence and tolerance. The abuse liability of butalbital, aspirin, and caffeine is similar to that of other barbiturate-containing drug combinations. Caution should be exercised when prescribing medication for patients with a known propensity for taking excessive quantities of drugs, which is not uncommon in patients with chronic tension headache.

Use in Ambulatory Patients:

Butalbital, aspirin, and caffeine may impair the mental and/or physical abilities required for the performance of potentially hazardous tasks, such as driving a car or operating machinery. The patient should be cautioned accordingly. Central Nervous System depressant effects of butalbital may be additive with those of other CNS depressants. Concurrent use with other sedative-hypnotics or alcohol should be avoided. When such combined therapy is necessary, the dose of one or more agents may need to be reduced.

Adequate studies have not been performed in animals to determine whether this drug affects fertility in males or females, has teratogenic potential, or has other adverse effects on the fetus. While there are no well-controlled studies in pregnant women, over twenty years of marketing and clinical experience does not include any positive evidence of adverse effects on the fetus. Although there is no clearly defined risk, such experience cannot exclude the possibility of infrequent or subtle damage to the human fetus. Butalbital, aspirin, and caffeine should be used in pregnant women only when clearly needed.

The effects of butalbital, aspirin, and caffeine on infants of nursing mothers are not known. Salicylates and barbiturates are excreted in the breast milk of nursing mothers. The serum levels in infants are believed to be insignificant with therapeutic doses.

Salicylates should be used with extreme caution in the presence of peptic ulcer or coagulation abnormalities.

The most frequent adverse reactions are drowsiness and dizziness. Less frequent adverse reactions are lightheadedness and gastrointestinal disturbances including nausea, vomiting, and flatulence. A single incidence of bone marrow suppression has been reported with the use of butalbital, aspirin, and caffeine. Several cases of dermatological reactions including toxic epidermal necrolysis and erythema multiforme have been reported.

The toxic effects of acute overdosage of butalbital, aspirin, and caffeine are attributable mainly to its barbiturate component, and, to a lesser extent, aspirin. Because toxic effects of caffeine occur in very high dosages only, the possibility of significant caffeine toxicity from butalbital, aspirin, and caffeine overdosage is unlikely. Symptoms attributable to acute barbiturate poisoning include drowsiness, confusion, and coma; respiratory depression; hypotension; shock. Symptoms attributable to acute aspirin poisoning include hyperpnea; acid-base disturbances with development of metabolic acidosis; vomiting and abdominal pain; tinnitus; hyperthermia; hypoprothrombinemia; restlessness; delirium; convulsions. Acute caffeine poisoning may cause insomnia, restlessness, tremor, and delirium; tachycardia and extrasystoles. Treatment consists primarily of management of barbiturate intoxication and the correction of the acid-base imbalance due to salicylism. Vomiting should be induced mechanically or with emetics in the conscious patient. Gastric lavage may be used if the pharyngeal and laryngeal reflexes are present and if less than 4 hours have elapsed since ingestion. A cuffed endotracheal tube should be inserted before gastric lavage of the unconscious patient and when necessary to provide assisted respiration. Diuresis, alkalinization of the urine, and correction of electrolyte disturbances should be accomplished through administration of intravenous fluids such as 1% sodium bicarbonate in 5% dextrose in water. Meticulous attention should be given to maintaining adequate pulmonary ventilation. Correction of hypotension may require the administration of levartherenol bitartrate or phenylephrine hydrochloride by intravenous infusion . In severe cases of intoxication, peritoneal dialysis, hemodialysis, or exchange transfusion may be lifesaving. Hypoprothrombinemia should be treated with Vitamin K, intravenously.

One or two tablets every 4 hours. Total daily dose should not exceed 6 tablets.