Concomitant Use with NSAIDs

Ketorolac tromethamine is a racemic mixture of [-]S- and [+]R-enantiomeric forms, with the S-form having analgesic activity.

The mean apparent volume (Vβ) of ketorolac tromethamine following complete distribution was approximately 13 liters.  This parameter was determined from single-dose data. The ketorolac tromethamine racemate has been shown to be highly protein bound (99%).  Nevertheless, even plasma concentrations as high as 10 mcg/mL will only occupy approximately 5% of the albumin binding sites.  Thus, the unbound fraction for each enantiomer will be constant over the therapeutic range.  A decrease in serum albumin, however, will result in increased free drug concentrations.

Ketorolac tromethamine is largely metabolized in the liver.  The metabolic products are hydroxylated and conjugated forms of the parent drug.  The products of metabolism, and some unchanged drug, are excreted in the urine.

The principal route of elimination of ketorolac and its metabolites is renal.  About 92% of a given dose is found in the urine, approximately 40% as metabolites and 60% as unchanged ketorolac.  Approximately 6% of a dose is excreted in the feces.  A single-dose study with 10 mg ketorolac tromethamine (n=9) demonstrated that the S-enantiomer is cleared approximately two times faster than the R-enantiomer and that the clearance was independent of the route of administration.  This means that the ratio of S/R plasma concentrations decreases with time after each dose.  There is little or no inversion of the R- to S-form in humans.  The clearance of the racemate in normal subjects, elderly individuals and in hepatically and renally impaired patients is outlined in Table 2 (see CLINICAL PHARMACOLOGY, Kinetics in Special Populations).

The half-life of the ketorolac tromethamine S-enantiomer was approximately 2.5 hours (SD±0.4) compared with 5 hours (SD ± 1.7) for the R-enantiomer.  In other studies, the half-life for the racemate has been reported to lie within the range of 5 to 6 hours.

Accumulation of ketorolac tromethamine has not been studied in special populations (elderly, pediatric, renal failure, or hepatic disease patients).

The Influence of Age, Liver and Kidney Function, on the Clearance and Terminal Half-life of Ketorolac Tromethamine (IM1and ORAL2) In Adult Populations

The AUC ∞ - ratio of the ketorolac tromethamine enantiomers in healthy subjects and patients remained similar, indicating there was no selective excretion of either enantiomer in patients compared to healthy subjects (see WARNINGS, Renal Effects; see Table 2).

There was no significant difference in estimates of halflife, AUC ∞, and C max in 7 patients with liver disease compared to healthy volunteers (see PRECAUTIONS, General, Hepatic Effects; see Table 2).

Pharmacokinetic differences due to race have not been identified.

The analgesic efficacy of intramuscularly, intravenously, and orally administered ketorolac tromethamine was investigated in two postoperative pain models: general surgery (orthopedic, gynecologic, and abdominal) and oral surgery (removal of impacted third molars).  The studies were double-blind, single- and multiple-dose, parallel trial designs in patients with moderate to severe pain at baseline.  Ketorolac tromethamine injection was compared as follows:  IM to meperidine or morphine administered intramuscularly and IV to morphine administered either directly IV or through a PCA (Patient-Controlled Analgesia) pump.

Short-Term Use (up to 5 days) Studies

The analgesic efficacy of single doses of ketorolac tromethamine injection has been demonstrated by showing a decrease in the need for supplemental narcotic in pediatric patients receiving ketorolac as compared to placebo. See discussion of these results under Clinical Studies with Concomitant Use of Opioids   below.

Clinical Studies with Concomitant Use of Opioids

Clinical studies in postoperative pain management have demonstrated that ketorolac tromethamine injection, when used in combination with opioids, significantly reduced opioid consumption.  This combination may be useful in the subpopulation of patients especially prone to opioid-related complications.  Ketorolac tromethamine and narcotics should not be administered in the same syringe.

A large postmarketing observational, nonrandomized study, involving approximately 10,000 patients receiving ketorolac tromethamine, demonstrated that the risk of clinically serious gastrointestinal (GI) bleeding was dose-dependent (see Tables 3A and 3B).  This was particularly true in elderly patients who received an average daily dose greater than 60 mg/day of ketorolac tromethamine (Table 3A).

Incidence of Clinically Serious GI Bleeding as Related to Age,Total Daily Dose, and History of GI Perforation, Ulcer, Bleeding (PUB) after up to 5 Days of Treatment with Ketorolac Tromethamine Injection

A. Adult Patients without History of PUB

B. Adult Patients with History of PUB

Ketorolac tromethamine is CONTRAINDICATED in patientswith previously documented peptic ulcers and/or GI bleeding.  Serious gastrointestinal toxicity, such as bleeding, ulceration and perforation, can occur at any time, with or without warning symptoms, in patients treated with ketorolac tromethamine.  Studies to date with NSAIDs have not identified any subset of patients not at risk of developing peptic ulceration and bleeding.  Elderly or debilitated patients seem to tolerate ulceration or bleeding less well than other individuals, and most spontaneous reports of fatal GI events are in this population.  Postmarketing experience with parenterally administered ketorolac tromethamine suggests that there may be a greater risk of gastrointestinal ulcerations, bleeding and perforation in the elderly.

The same study showed that elderly (≥ 65 years of age) and debilitated patients are more susceptible to gastrointestinal complications.  A history of peptic ulcer disease was revealed as another risk factor that increases the possibility of developing serious gastrointestinal complications during ketorolac tromethamine therapy (see Tables 3A and 3B).

Because patients with underlying renal insufficiency are at increased risk of developing acute renal failure, the risks and benefits should be assessed prior to giving ketorolac tromethamine to these patients.  Hence, in patients with moderately elevated serum creatinine, it is recommended that the daily dose of ketorolac tromethamine injection be reduced by half, not to exceed 60 mg/day.  KETOROLAC TROMETHAMINE IS CONTRAINDICATED IN PATIENTS WITH SERUM CREATININE CONCENTRATIONS INDICATING ADVANCED RENAL IMPAIRMENT (see CONTRAINDICATIONS).

Hypovolemia should be corrected before treatment with ketorolac tromethamine is initiated.

Ketorolac tromethamine is a potent NSAID and may cause serious side effects such as gastrointestinal bleeding or kidney failure, which may result in hospitalization and even fatal outcome.

Advise patients not to give ketorolac tromethamine tablets to other family members and to discard any unused drug.

Remember that the total duration of ketorolac therapy is not to exceed 5 days in adults or a single dose in pediatric patients ages 2 to 16 years.

Warfarin, Digoxin, Salicylate and Heparin:  The in vitro binding of warfarin to plasma proteins is only slightly reduced by ketorolac tromethamine (99.5% control vs 99.3%) when ketorolac plasma concentrations reach 5 to 10 mcg/mL.  Ketorolac does not alter digoxin protein binding.  In vitro studies indicate that, at therapeutic concentrations of salicylate (300 mcg/mL), the binding of ketorolac was reduced from approximately 99.2% to 97.5%, representing a potential two-fold increase in unbound ketorolac plasma levels.  Therapeutic concentrations of digoxin, warfarin, ibuprofen, naproxen, piroxicam, acetaminophen, phenytoin, and tolbutamide did not alter ketorolac tromethamine protein binding.

Lithium:Inhibition of renal lithium clearance, leading to an increase in plasma lithium concentration, has been reported with some prostaglandin synthesis-inhibiting drugs.  The effect of ketorolac tromethamine on plasma lithium has not been studied, but cases of increased lithium plasma levels during ketorolac tromethamine therapy have been reported.

ACE inhibitors:  Concomitant use of ACE inhibitors may increase the risk of renal impairment, particularly in volume-depleted patients.

There is no evidence in animal or human studies that ketorolac tromethamine induces or inhibits hepatic enzymes capable of metabolizing itself or other drugs.

The use of ketorolac tromethamine is contraindicated in labor and delivery because, through its prostaglandin synthesis inhibitory effect, it may adversely affect fetal circulation and inhibit uterine contractions, thus increasing the risk of uterine hemorrhage (see CONTRAINDICATIONS).


The Adverse Reactions Listed Below Were Reported In Clinical Trials As Probably Related To Ketorolac Tromethamine:

The Following Adverse Events Were Reported From Postmarketing Experience:

Symptoms following acute NSAIDs overdoses are usually limited to lethargy, drowsiness, nausea, vomiting, and epigastric pain, which are generally reversible with supportive care.  Gastrointestinal bleeding can occur.  Hypertension, acute renal failure, respiratory depression and coma may occur, but are rare.  Anaphylactoid reactions have been reported with therapeutic ingestion of NSAIDs, and may occur following an overdose.

Patients should be managed by symptomatic and supportive care following a NSAIDs overdose.  There are no specific antidotes.  Emesis and/or activated charcoal (60 g to 100 g in adults, 1g/kg to 2 g/kg in children) and/or osmotic cathartic may be indicated in patients seen within 4 hours of ingestion with symptoms or following a large oral overdose (5 to 10 times the usual dose).

In controlled overdosage, daily doses of 360 mg of ketorolac tromethamine injection given for 5 days (three times the highest recommended dose), caused abdominal pain and peptic ulcers which healed after discontinuation of dosing.  Metabolic acidosis has been reported following intentional overdosage.

Single overdoses of ketorolac tromethamine have been variously associated with abdominal pain, nausea, vomiting, hyperventilation, peptic ulcers, and/or erosive gastritis and renal dysfunction which have resolved after discontinuation of dosing.  Dialysis does not significantly clear ketorolac tromethamine from the blood stream.

Ketorolac tromethamine injection may be used as a single or multiple dose on a regular or “prn” schedule for the management of moderately severe acute pain that requires analgesia at the opioid level, usually in a postoperative setting.  Hypovolemia should be corrected prior to the administration of ketorolac tromethamine (see WARNINGS, Renal Effects).  Patients should be switched to alternative analgesics as soon as possible, but ketorolac tromethamine therapy is not to exceed 5 days.

When administering ketorolac tromethamine injection, the IV bolus must be given over no less than 15 seconds.  The IM administration should be given slowly and deeply into the muscle.  The analgesic effect begins in ~30 minutes with maximum effect in 1 to 2 hours after dosing IV or IM.  Duration of analgesic effect is usually 4 to 6 hours.

Single-Dose Treatment: The Following Regimen Should Be Limited To Single Administration Use Only

Pediatric Patients (2 to 16 years of age): The pediatric population should receive only a single dose of ketorolac tromethamine injection as follows:

For breakthrough pain do not increase the dose or the frequency of ketorolac tromethamine.  Consideration should be given to supplementing these regimens with low doses of opioids prn unless otherwise contraindicated.

FOR IM or IV USE

FOR IM USE ONLY, NOT FOR IV USE

The above products are packaged in twenty-fives.

N+ and NOVAPLUS are registered trademarks of Novation, LLC. 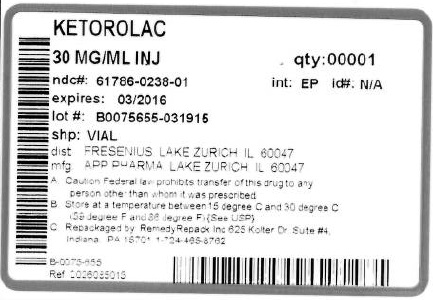