PERSANTINE® (dipyridamole USP) is a platelet inhibitor chemically described as 2,2',2",2"'-[(4,8- Dipiperidinopyrimido[5,4-d]pyrimidine-2,6-diyl)dinitrilo]-tetraethanol. It has the following structural formula: 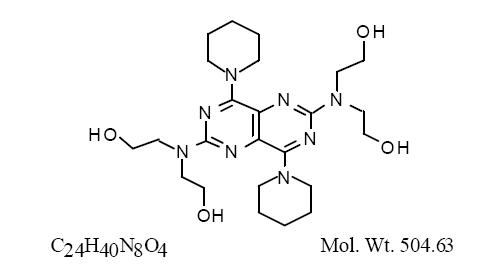 Dipyridamole is an odorless yellow crystalline powder, having a bitter taste. It is soluble in dilute acids, methanol and chloroform, and practically insoluble in water.

PERSANTINE tablets have been found to lengthen abnormally shortened platelet survival time in a dose-dependent manner.

PERSANTINE tablets do not influence prothrombin time or activity measurements when administered with warfarin.

Dipyridamole inhibits the uptake of adenosine into platelets, endothelial cells and erythrocytes in vitro and in vivo; the inhibition occurs in a dose-dependent manner at therapeutic concentrations (0.5–1.9 μg/mL). This inhibition results in an increase in local concentrations of adenosine which acts on the platelet A2-receptor thereby stimulating platelet adenylate cyclase and increasing platelet cyclic-3',5'-adenosine monophosphate (cAMP) levels. Via this mechanism, platelet aggregation is inhibited in response to various stimuli such as platelet activating factor (PAF), collagen and adenosine diphosphate (ADP).

Similar effects were observed following intravenous dipyridamole in doses ranging from 0.025 to 2.0 mg/kg.

In man the same qualitative hemodynamic effects have been observed. However, acute intravenous administration of dipyridamole may worsen regional myocardial perfusion distal to partial occlusion of coronary arteries.

Following an oral dose of PERSANTINE tablets, the average time to peak concentration is about 75 minutes. The decline in plasma concentration following a dose of PERSANTINE tablets fits a two-compartment model. The alpha half-life (the initial decline following peak concentration) is approximately 40 minutes. The beta half-life (the terminal decline in plasma concentration) is approximately 10 hours. Dipyridamole is highly bound to plasma proteins. It is metabolized in the liver where it is conjugated as a glucuronide and excreted with the bile.

PERSANTINE tablets are indicated as an adjunct to coumarin anticoagulants in the prevention of postoperative thromboembolic complications of cardiac valve replacement.

Hypersensitivity to dipyridamole and any of the other components.

Hepatic Insufficiency: Elevations of hepatic enzymes and hepatic failure have been reported in association with dipyridamole administration.

Hypotension: Dipyridamole should be used with caution in patients with hypotension since it can produce peripheral vasodilation.

Stress Testing with Intravenous Dipyridamole and Other Adenosinergic Agents: Clinical experience suggests that patients being treated with PERSANTINE tablets who also require pharmacological stress testing with intravenous dipyridamole or other adenosinergic agents (e.g. adenosine, regadenoson) should interrupt PERSANTINE tablets for 48 hours prior to stress testing.

Intake of PERSANTINE tablets within 48 hours prior to stress testing with intravenous dipyridamole or other adenosinergic agents may increase the risk for cardiovascular side effects of these agents and may impair the sensitivity of the test.

Dipyridamole has been associated with elevated hepatic enzymes.

No pharmacokinetic drug-drug interaction studies were conducted with Persantine® (dipyridamole USP) tablets. The following information was obtained from the literature.

In studies in which dipyridamole was administered in the feed to mice (up to 111 weeks in males and females) and rats (up to 128 weeks in males and up to 142 weeks in females), there was no evidence of drug-related carcinogenesis . The highest dose administered in these studies (75 mg/kg/day) was, on a mg/m2 basis, about equivalent to the maximum recommended daily human oral dose (MRHD) in mice and about twice the MRHD in rats. Mutagenicity tests of dipyridamole with bacterial and mammalian cell systems were negative. There was no evidence of impaired fertility when dipyridamole was administered to male and female rats at oral doses up to 500 mg/kg/day (about 12 times the MRHD on a mg/m2 basis). A significant reduction in number of corpora lutea with consequent reduction in implantations and live fetuses was, however, observed at 1250 mg/kg (more than 30 times the MRHD on a mg/m2 basis).

Reproduction studies have been performed in mice, rabbits and rats at oral dipyridamole doses of up to 125 mg/kg, 40 mg/kg and 1000 mg/kg, respectively (about 1 ½, 2 and 25 times the maximum recommended daily human oral dose, respectively, on a mg/m2 basis) and have revealed no evidence of harm to the fetus due to dipyridamole. There are, however, no adequate and well-controlled studies in pregnant women. Because animal reproduction studies are not always predictive of human response, PERSANTINE tablets should be used during pregnancy only if clearly needed.

As dipyridamole is excreted in human milk, caution should be exercised when PERSANTINE tablets are administered to a nursing woman.

Safety and effectiveness in the pediatric population below the age of 12 years have not been established.

Adverse reactions at therapeutic doses are usually minimal and transient. On long-term use of PERSANTINE tablets initial side effects usually disappear. The following reactions in Table 1 were reported in two heart valve replacement trials comparing PERSANTINE tablets and warfarin therapy to either warfarin alone or warfarin and placebo:

Other reactions from uncontrolled studies include diarrhea, vomiting, flushing and pruritus. In addition, angina pectoris has been reported rarely and there have been rare reports of liver dysfunction. On those uncommon occasions when adverse reactions have been persistent or intolerable, they have ceased on withdrawal of the medication.

When Persantine® (dipyridamole USP) tablets were administered concomitantly with warfarin, bleeding was no greater in frequency or severity than that observed when warfarin was administered alone. In rare cases, increased bleeding during or after surgery has been observed.

In case of real or suspected overdose, seek medical attention or contact a Poison Control Center immediately. Careful medical management is essential. Based upon the known hemodynamic effects of dipyridamole, symptoms such as warm feeling, flushes, sweating, restlessness, feeling of weakness and dizziness may occur. A drop in blood pressure and tachycardia might also be observed.

Symptomatic treatment is recommended, possibly including a vasopressor drug. Gastric lavage should be considered. Administration of xanthine derivatives (e.g., aminophylline) may reverse the hemodynamic effects of dipyridamole overdose. Since dipyridamole is highly protein bound, dialysis is not likely to be of benefit.

Adjunctive Use in Prophylaxis of Thromboembolism after Cardiac Valve Replacement. The recommended dose is 75-100 mg four times daily as an adjunct to the usual warfarin therapy. Please note that aspirin is not to be administered concomitantly with coumarin anticoagulants. 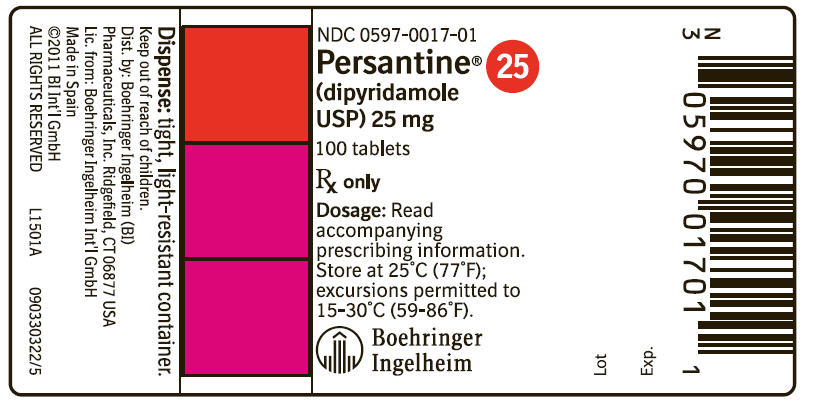