FOR INTRAVENOUS INFUSION OR INTRAMUSCULAR USE

Each mL of Oxytocin Injection, USP (synthetic), intended for intravenous infusion or intramuscular injection, possesses an oxytocic activity equivalent to 10 USP Oxytocin Units and contains chlorobutanol anhydrous (chloral derivative) 0.5%.  This product may contain up to 12.5% decomposition products/impurities.  Oxytocin injection (synthetic) is a sterile, clear, colorless solution of oxytocin in Water for Injection prepared by synthesis.  Acetic acid may have been added for pH adjustment (pH 3.0-5.0).  The structural formula is:

Oxytocin injection (synthetic) acts on the smooth muscle of the uterus to stimulate contractions; response depends on the uterine threshold of excitability.  It exerts a selective action on the smooth musculature of the uterus, particularly toward the end of pregnancy, during labor and immediately following delivery.  Oxytocin stimulates rhythmic contractions of the uterus, increases the frequency of existing contractions and raises the tone of the uterine musculature.  Synthetic oxytocin does not possess the cardiovascular effects, such as elevation of blood pressure, as exhibited by vasopressin found in posterior pituitary injection.

Oxytocin injection (synthetic) is indicated to produce uterine contractions during the third stage of labor and to control postpartum bleeding or hemorrhage.

Oxytocin injection (synthetic) is indicated for the initiation or improvement of uterine contractions, where this is desirable and considered suitable, in order to achieve early vaginal delivery for fetal or maternal reasons.  It is indicated for (1) induction of labor in patients with a medical indication for the initiation of labor, such as Rh problems, maternal diabetes, pre-eclampsia at or near term, when delivery is in the best interest of mother and fetus or when membranes are prematurely ruptured and delivery is indicated; (2) stimulation or reinforcement of labor, as in selected cases of uterine inertia; (3) adjunctive therapy in the management of incomplete or inevitable abortion.  In the first trimester, curettage is generally considered primary therapy.  In second trimester abortion, oxytocin infusion will often be successful in emptying the uterus.  Other means of therapy, however, may be required in such cases.

Oxytocin injection (synthetic) is contraindicated in any of the following conditions:

1.
Significant cephalopelvic disproportion;
2.
Unfavorable fetal positions or presentations which are undeliverable without conversion prior to delivery, i.e., transverse lies;
3.
In obstetrical emergencies where the benefit-to-risk ratio for either the fetus or the mother favors surgical intervention;
4.
In cases of fetal distress where delivery is not imminent;
5.
Prolonged use in uterine inertia or severe toxemia;
6.
Hypertonic uterine patterns;
7.
Patients with hypersensitivity to the drug;
8.
Induction or augmentation of labor in those cases where vaginal delivery is contraindicated, such as cord presentation or prolapse, total placenta previa, and vasa previa.

Oxytocin injection (synthetic) when given for induction or stimulation of labor, must be administered only by the intravenous route and with adequate medical supervision in a hospital.

All patients receiving intravenous oxytocin must be under continuous observation by trained personnel with a thorough knowledge of the drug and qualified to identify complications.  A physician qualified to manage any complications should be immediately available.

Except in unusual circumstances, oxytocin should not be administered in the following conditions: prematurity, borderline cephalopelvic disproportion, previous major surgery on the cervix or uterus including Caesarean section, overdistention of the uterus, grand multiparity or invasive cervical carcinoma.  Because of the variability of the combinations of factors which may be present in the conditions above, the definition of ‘‘unusual circumstances’’ must be left to the judgement of the physician.  The decision can only be made by carefully weighing the potential benefits which oxytocin can provide in a given case against rare but definite potential for the drug to produce hypertonicity or tetanic spasm.

Maternal deaths due to hypertensive episodes, subarachnoid hemorrhage, rupture of the uterus and fetal deaths due to various causes have been reported associated with the use of parenteral oxytocic drugs for induction of labor and for augmentation in the first and second stages of labor.

Oxytocin has been shown to have an intrinsic antidiuretic effect, acting to increase water reabsorption from the glomerular filtrate.  Consideration should, therefore, be given to the possibility of water intoxication, particularly when oxytocin is administered continuously by infusion and the patient is receiving fluids by mouth.

Severe hypertension has been reported when oxytocin was given three to four hours following prophylactic administration of a vasoconstrictor in conjunction with caudal block anesthesia.  Cyclopropane anesthesia may modify oxytocin’s cardiovascular effects, so as to produce unexpected results such as hypotension.  Maternal sinus bradycardia with abnormal atrioventricular rhythms has also been noted when oxytocin was used concomitantly with cyclopropane anesthesia.

There are no animal or human studies on the carcinogenicity and mutagenicity of this drug, nor is there any information on its effect on fertility.

There are no known indications for use of oxytocin in the first and second trimester of pregnancy other than in relation to spontaneous or induced abortion.  Based on the wide experience with this drug and its chemical structure and pharmacological properties, it would not be expected to present a risk of fetal abnormalities when used as indicated.

Nonteratogenic Effects—See ADVERSE REACTIONS in the fetus or infant.

Labor and Delivery—See INDICATIONS AND USAGE.

The following adverse reactions have been reported in the mother:

Excessive dosage or hypersensitivity to the drug may result in uterine hypertonicity, spasm, tetanic contraction or rupture of the uterus.

The possibility of increased blood loss and afibrinogenemia should be kept in mind when administering the drug.

The following adverse reactions have been reported in the fetus or infant:

Due to induced uterine mobility:

Due to use of oxytocin in the mother:

Overdosage with oxytocin injection (synthetic) depends essentially on uterine hyperactivity whether or not due to hypersensitivity to this agent.  Hyperstimulation with strong (hypertonic) or prolonged (tetanic) contractions, or a resting tone of 15 to 20 mm H2O or more between contractions can lead to tumultuous labor, uterine rupture, cervical and vaginal lacerations, postpartum hemorrhage, uteroplacental hypoperfusion and variable deceleration of fetal heart, fetal hypoxia, hypercapnia or death.  Water intoxication with convulsions, which is caused by the inherent antidiuretic effect of oxytocin, is a serious complication that may occur if large doses (40 to 50 milliunits/minute) are infused for long periods.  Management consists of immediate discontinuation of oxytocin, and symptomatic and supportive therapy.

Dosage of oxytocin is determined by uterine response.  The following dosage information is based upon the various regimens and indications in general use.

Induction or Stimulation of Labor

Intravenous infusion (drip method) is the only acceptable method of administration for the induction or stimulation of labor.

Accurate control of the rate of infusion flow is essential.  An infusion pump or other such device and frequent monitoring of strength of contractions and fetal heart rate are necessary for the safe administration of oxytocin for the induction or stimulation of labor.  If uterine contractions become too powerful, the infusion can be abruptly stopped, and oxytocic stimulation of the uterine musculature will soon wane.

An intravenous infusion of a non-oxytocin containing solution should be started.  Physiologic electrolyte solutions should be used except under unusual circumstances.

To prepare the usual solution for intravenous infusion–one mL (10 units) is combined aseptically with 1,000 mL of a non-hydrating diluent.

The combined solution, rotated in the infusion bottle to insure thorough mixing, contains 10 mU/mL.  Add the container with dilute oxytocic solution to the system through the use of a constant infusion pump or other such device to control accurately the rate of infusion.

The fetal heart rate, resting uterine tone, and the frequency, duration, and force of contractions should be monitored.

The oxytocin infusion should be discontinued immediately in the event of uterine hyperactivity or fetal distress.   Oxygen should be administered to the mother.  The mother and fetus must be evaluated by the responsible physician.

Intravenous Infusion (Drip Method)—To control postpartum bleeding, 10 to 40 units of oxytocin may be added to 1,000 mL of a nonhydrating diluent and run at a rate necessary to control uterine atony.

Intramuscular Administration—1 mL (10 units) of oxytocin can be given after delivery of the placenta.

Treatment of Incomplete or Inevitable Abortion

*Packaged in a plastic vial.

Do not permit to freeze. 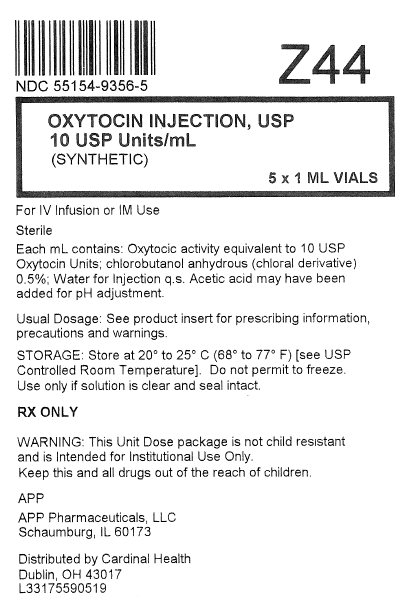