Albuterol sulfate is a white or practically white powder freely soluble in water and slightly soluble in alcohol, in chloroform, and in ether per USP definition.

The pharmacologic effects of beta-adrenergic agonist drugs, including albuterol are at least in part attributable to stimulation through beta adrenergic receptors of intracellular adenyl cyclase, the enzyme that catalyzes the conversion of adenosine triphosphate (ATP) to cyclic - 3', 5' - adenosine monophosphate (cyclic AMP). Increased cyclic AMP levels are associated with relaxation of bronchial smooth muscle and inhibition of release of mediators of immediate hypersensitivity from cells, especially from mast cells.

Albuterol has been shown in most controlled clinical trials to have more effect on the respiratory tract, in the form of bronchial smooth muscle relaxation, than isoproterenol at comparable doses while producing fewer cardiovascular effects. Albuterol is longer acting than isoproterenol in most patients by any route of administration because it is not a substrate for the cellular uptake processes for catecholamines nor for catechol-O-methyl transferase.

Studies in laboratory animals (mini pigs, rodents, and dogs) have demonstrated the occurrence of cardiac arrhythmias and sudden death (with histologic evidence of myocardial necrosis) when beta-agonists and methylxanthines are administered concurrently. The clinical significance of these findings is unknown.

Albuterol is rapidly absorbed after oral administration of 10 mL of albuterol sulfate syrup (4 mg of albuterol) in normal volunteers. Maximum plasma concentrations of about 18 ng/mL of albuterol are achieved within 2 hours, and the drug is eliminated with a half-life of about 5 hours. In other studies, the analysis of urine samples of patients given 8 mg of tritiated albuterol orally showed that 76% of the dose was excreted over three days, with the majority of the dose being excreted within the first 24 hours. Sixty percent of this radioactivity was shown to be the metabolite. Feces collected over this period contained 4% of the administered dose.

In controlled clinical trials in patients with asthma, the onset of improvement in pulmonary function, as measured by maximum midexpiratory flow rate (MMEF) and forced expiratory volume in 1 second (FEV1), was within 30 minutes after a dose of albuterol sulfate syrup, with peak improvement occurring between 2 and 3 hours. In a controlled clinical trial involving 55 children, clinically significant improvement (defined as maintaining a 15% or more increase in FEV1 and a 20% or more increased in MMEF over baseline values) continued to be recorded up to 6 hours. No decrease in the effectiveness was reported in one uncontrolled study of 32 children who took albuterol sulfate syrup for a 3-month period.

Albuterol Sulfate Syrup is indicated for the relief of bronchospasm in adults and children 2 years of age and older with reversible obstructive airway disease.

Albuterol Sulfate Syrup is contraindicated in patients with a history of hypersensitivity to albuterol or any of its components.

Albuterol Sulfate Syrup, like all other beta-adrenergic agonists, can produce a clinically significant cardiovascular effect in some patients as measure by pulse rate, blood pressure and/or symptoms. Although such effects are uncommon after administration of albuterol sulfate syrup at recommended doses, if they occur, the drug may need to be discontinued. In addition, beta-agonists have been reported to produce electrocardiogram (ECG) changes, such as flattening of the T wave, prolongation of the QTc interval, and ST segment depression. The clinical significance of these findings is unknown. Therefore, Albuterol Sulfate Syrup, like all sympathomimetic amines, should be used with caution in patients with cardiovascular disorders, especially coronary insufficiency, cardiac arrhythmias, and hypertension.

Asthma may deteriorate acutely over a period of hours or chronically over several days or longer. If the patient needs more doses of albuterol sulfate syrup than usual, this may be a marker of destabilization of asthma and requires reevaluation of the patient and treatment regimen, giving special consideration to the possible need for anti-inflammatory treatment, e.g., corticosteroids.

Immediate hypersensitivity reactions may occur after administration of albuterol, as demonstrated by rare cases of urticaria, angioedema, rash, bronchospasm, and oropharyngeal edema. Albuterol, like other beta-adrenergic agonists, can produce a significant cardiovascular effect in some patients, as measured by pulse rate, blood pressure, symptoms, and/or electrocardiographic changes. Rarely, erythema multiforme and Stevens-Johnson syndrome have been associated with the administration of albuterol sulfate in children.

Albuterol, as with all sympathomimetic amines, should be used with caution in patients with cardiovascular disorders, especially coronary insufficiency, cardiac arrhythmias, and hypertension; in patients with convulsive disorders, hyperthyroidism, or diabetes mellitus; and in patients who are unusually responsive to sympathomimetic amines. Clinically significant changes in systolic and diastolic blood pressure have been seen in individual patients and could be expected to occur in some patients after use of any beta-adrenergic bronchodilator. Large doses of intravenous albuterol have been reported to aggravate pre-existing diabetes mellitus and ketoacidosis. As with other beta-agonists, albuterol may produce significant hypokalemia in some patients, possibly through intracellular shunting, which has the potential to produce adverse cardiovascular effects. The decrease is usually transient, not requiring supplementation.

The concomitant use of albuterol sulfate syrup and other oral sympathomimetic agents is not recommended since such combined use may lead to deleterious cardiovascular effects. This recommendation does not preclude the judicious use of an aerosol bronchodilator of the adrenergic stimulant type in patients receiving albuterol sulfate syrup. Such concomitant use, however, should be individualized and not given on a routine basis. If regular coadministration is required, then alternative therapy should be considered.

Albuterol should be administered with extreme caution to patients being treated with monoamine oxidase inhibitors or tricyclic antidepressants, or within 2 weeks of discontinuation of such agents, because the action of albuterol on the vascular system may be potentiated.

Beta-adrenergic receptor blocking agents not only block the pulmonary effect of beta-agonists, such as albuterol sulfate syrup, but may produce severe bronchospasm in asthmatic patients. Therefore, patients with asthma should not normally be treated with beta-blockers. However, under certain circumstances, e.g., as prophylaxis after myocardial infarction, there may be no acceptable alternatives to the use of beta-adrenergic blocking agents in patients with asthma. In this setting, cardioselective beta-blockers could be considered, although they should be administered with caution.

Fluctuation assays in S. typhimurium TA98 and E. coli WP2, both with metabolic activation, were negative. Albuterol sulfate was not clastogenic in a human peripheral lymphocyte assay or in an AH1 strain mouse micronucleus assay at intraperitoneal doses of up to 200 mg/kg. Reproduction studies in rats demonstrated no evidence of impaired fertility at oral doses up to 50mg/kg (approximately 15 times the maximum recommended daily oral dose for adults on a mg/m2 basis).

During worldwide marketing experience, various congenital anomalies including cleft palate and limb defects, have been rarely reported in the offspring of patients being treated with albuterol. Some of the mothers were taking multiple medications during their pregnancies. No consistent pattern of defects can be discerned, and a relationship between albuterol use and congenital anomalies has not been established.

Because of the potential for beta-agonist interference with uterine contractility, use of albuterol sulfate syrup for relief of bronchospasm during labor should be restricted to those patients in whom the benefits clearly outweigh the risk.

Albuterol has not been approved for the management of preterm labor. The benefit: risk ratio when albuterol is administered for tocolysis has not been established. Serious adverse reactions, including maternal pulmonary edema, have been reported during or following treatment of premature labor with beta2-agonists, including albuterol.

It is not known whether this drug is excreted in human milk. Because of the potential for tumorigenicity shown for albuterol in some animal studies, a decision should be made whether to discontinue nursing or to discontinue the drug, taking into account the importance of the drug to the mother.

Safety and effectiveness in children below 2 years of age have not been established.

In clinical trials, the most frequent adverse reactions to albuterol sulfate syrup in adults and older children were:

In clinical trials, the following adverse reactions to albuterol sulfate syrup were noted more frequently in young children 2 to 6 years of age than in older children and adults:

Cases of urticaria, angioedema, rash, bronchospasm, hoarseness, oropharyngeal edema, and arrhythmias (including atrial fibrillation, supraventricular tachycardia, extrasystoles) have been reported after the use of albuterol sulfate syrup.

In addition, albuterol, like other sympathomimetic agents can cause adverse reactions such as hypertension, angina, vomiting, vertigo, central nervous system stimulation, unusual taste, and drying or irritation of the oropharynx.

The reactions are generally transient in nature, and it is usually not necessary to discontinue treatment with albuterol sulfate syrup. In selected cases, however, dosage may be reduced temporarily; after the reaction has subsided, dosage should be increased in small increments to the optimal dosage.

The expected symptoms with overdosage are those of excessive beta-adrenergic stimulation and/or occurrence or exaggeration of any of the symptoms listed under ADVERSE REACTIONS, e.g., seizures, angina, hypertension or hypotension, tachycardia with rates up to 200 beats per minute, arrhythmias, nervousness, headache, tremor, dry mouth, palpitation, nausea, dizziness, fatigue, malaise, and sleeplessness. Hypokalemia may also occur. As with all sympathomimetic medications, cardiac arrest and even death may be associated with abuse of albuterol sulfate syrup. Treatment consists of discontinuation of albuterol sulfate syrup together with appropriate symptomatic therapy. The judicious use of a cardioselective beta-receptor blocker may be considered, bearing in mind that such medication can produce bronchospasm. There is insufficient evidence to determine if dialysis is beneficial for overdosage of albuterol sulfate syrup.

Adults and Children Over 14 Years of Age

The usual starting dosage for adults and children over 14 years of age is 2 mg (1 teaspoonful) or 4 mg (2 teaspoonfuls) three or four times a day.

Children Over 6 Years to 14 Years of Age

The usual starting dosage for children over 6 years to 14 years of age is 2 mg (1 teaspoonful) three or four times a day.

Children 2 to 5 Years of Age

Adults and Children Over 14 Years of Age

For adults and children over 14 years of age, a dosage above 4 mg four times a day should be used only when the patient fails to respond. If a favorable response does not occur with the 4-mg initial dosage, it should be cautiously increased stepwise up to a maximum of 8 mg four times a day as tolerated.

For children over 6 years to 14 years of age who fail to respond to the initial starting dosage of 2 mg four times a day, the dosage may be cautiously increased stepwise, but not to exceed 24 mg/day (given in divided doses).

For children from 2 to 5 years of age who do not respond satisfactorily to the initial starting dosage, the dosage may be increased stepwise to 0.2 mg/kg of body weight three times a day, but not to exceed a maximum of 4 mg (2 teaspoonfuls) given three times a day.

Elderly Patients and Those Sensitive to Beta-adrenergic Stimulators

The initial dosage should be restricted to 2 mg three or four times a day and individually adjusted thereafter.

Albuterol Sulfate Syrup, a clear, yellow liquid with a strawberry flavor, contains 2 mg of albuterol (present as the sulfate) per 5 mL and is supplied in the following containers:

Dispense contents with a child resistant closure (as required) and in a tight, light-resistant container as defined in the USP/NF. 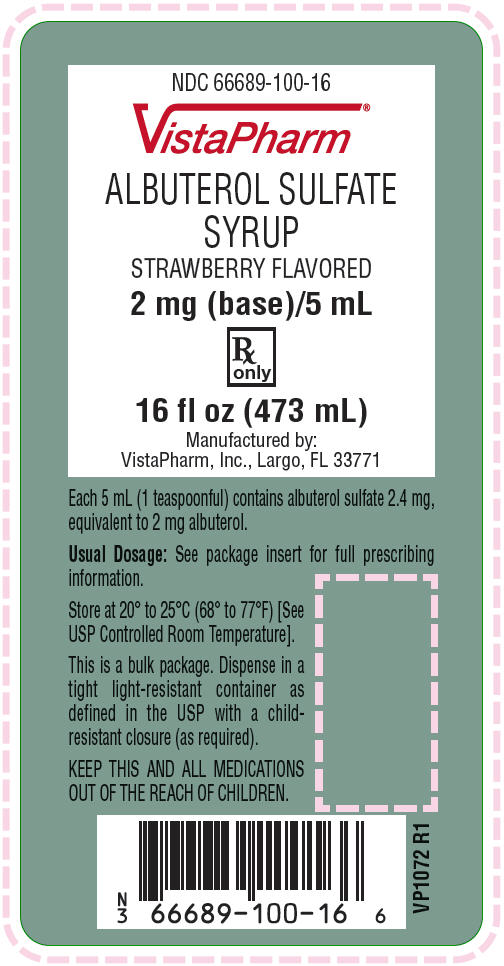