Physicians planning to use Gold Sodium Thiomalate should thoroughly familiarize themselves with its toxicity and its benefits. The possibility of toxic reactions should always be explained to the patient before starting therapy. Patients should be warned to report promptly any symptoms suggesting toxicity. Before each injection of Gold Sodium Thiomalate, the physician should review the results of laboratory work, and see the patient to determine the presence or absence of adverse reactions since some of these can be severe or even fatal.

MYOCHRYSINE® Gold Sodium Thiomalate is a sterile aqueous solution. It contains 0.5 percent BENZYL alcohol added as a preservative. The pH of the product is 5.8 t o 6.5.

Gold Sodium Thiomalate is a mixture of the mono- and di- sodium salts of gold thiomalic acid. The structural formula is:

The mode of action of Gold Sodium Thiomalate is unknown. The predominant action appears to be a suppressive effect on the synovitis of active rheumatoid disease.

Gold Sodium Thiomalate is indicated in the treatment of selected cases of active rheumatoid arthritis—both adult and juvenile type. The greatest benefit occurs in the early active stage. In late stages of the illness when cartilage and bone damage have occurred, gold can only check the progression of rheumatoid arthritis and prevent further structural damage to joints. It cannot repair damage caused by previously active disease.

Gold Sodium Thiomalate should be used only as one part of a complete program of therapy; alone it is not a complete treatment.

Severe toxicity resulting from previous exposure to gold or other heavy metals.

Before treatment is started, the patient's hemoglobin, erythrocyte, white blood cell, differential and platelet counts should be determined, and urinalysis should be done to serve as basic reference. Urine should be analyzed for protein and sediment changes prior to each injection. Complete blood counts including platelet estimation should be made before every second injection throughout treatment. The occurrence of purpura or ecchymoses at any time always requires a platelet count.

Danger signals of possible gold toxicity include: rapid reduction of hemoglobin, leukopenia below 4000 WBC/mm3, eosinophilia above 5 percent, platelet decrease below 100,000/mm3, albuminuria, hematuria, pruritus, skin eruption, stomatitis, or persistent diarrhea. No additional injections of Gold Sodium Thiomalate should be given unless further studies show these abnormalities to be caused by conditions other than gold toxicity.

Gold salts should not be used concomitantly with penicillamine.

The safety of coadministration with cytotoxic drugs has not been established.

Caution is indicated in the use of Gold Sodium Thiomalate in patients with the following:

Diabetes mellitus or congestive heart failure should be under control before gold therapy is instituted.

Renal adenomas have been reported in long-term toxicity studies of rats receiving Gold Sodium Thiomalate at high dose levels (2 mg/kg weekly for 45 weeks, followed by 6mg/kg daily for 47 weeks), approximately 2 to 42 times the usual human dose. These adenomas are histologically similar to those produced in rats by chronic administration of experimental gold compounds and other heavy metals, such as lead. No reports have been received of renal adenomas in man in association with the use of Gold Sodium Thiomalate.

There are no adequate and well-controlled studies in pregnant women. Gold Sodium Thiomalate should be used during pregnancy only if the potential benefit to the mother justifies the potential risk to the fetus.

The presence of gold has been demonstrated in the milk of lactating mothers. In addition, gold has been found in the serum and red blood cells of a nursing infant. In view of the above findings and because of the potential for serious adverse reactions in nursing infants from Gold Sodium Thiomalate, a decision should be made whether to discontinue nursing or to discontinue the drug, taking into account the importance of the drug to the mother. The slow excretion and persistence of gold in the mother, even after therapy is discontinued, must also be kept in mind.

A variety of adverse reactions may develop during the initial phase (weekly injections) of therapy or during maintenance treatment. Adverse reactions are observed most frequently when the cumulative dose of Gold Sodium Thiomalate administered is between 400 and 800 mg. Very uncommonly, complications occur days to months after cessation of treatment.

Mucous membrane reactions: Stomatitis is the second most common adverse reaction. Shallow ulcers on the buccal membranes, on the borders of the tongue, and on the palate or in the pharynx may occur as the only adverse reaction, or along with dermatitis. Sometimes diffuse glossitis or gingivitis develops. A metallic taste may precede these oral mucous membrane reactions and should be considered a warning signal.

Conjunctivitis is a rare reaction.

Renal reactions: Gold may be toxic to the kidney and produce a nephrotic syndrome or glomerulitis with hematuria. These renal reactions are usually relatively mild and subside completely if recognized early and treatment is discontinued. They may be come severe and chronic if treatment is continued after onset of the reaction. Therefore, it is important to perform a urinalysis before every injection, and to discontinue treatment promptly if proteinuria or hematuria develops.

Hematologic reactions: Blood dyscrasia due to gold toxicity is rare, but because of the potential serious consequences it must be constantly watched for and recognized early by frequent blood examinations done throughout treatment. Granulocytopenia; thrombocytopenia, with or without purpura; hypoplastic and aplastic anemia; and eosinophilia have all been reported. These hematologic disorders may occur separately or in combinations.

Nitritoid and allergic reactions: Reactions of the “nitritoid type” which may resemble anaphylactoid effects have been reported. Flushing, fainting, dizziness and sweating are most frequently reported. Other symptoms that may occur include: nausea, vomiting, malaise, headache, and weakness.

More severe, but less common effects include: anaphylactic shock, syncope, bradycardia, thickening of the tongue, difficulty in swallowing and breathing, and angioneurotic edema. These effects may occur almost immediately after injection or as late as 10 minutes of following injection. They may occur at any time during the course of therapy and if observed, treatment with Gold Sodium Thiomalate should be discontinued.

Miscellaneous reactions: Gastrointestinal reactions have been reported, including nausea, vomiting, anorexia, abdominal cramps and diarrhea. Ulcerative enterocolitis, which can be severe or even fatal, has been reported rarely.

There have been rare reports of reactions involving the eye such as iritis, corneal ulcers, and gold deposits in ocular tissues. Peripheral and central nervous system complications have been reported rarely. Peripheral neuropathy, with or without, fasciculations, sensorimotor effects (including Guillain-Barré syndrome) and elevated spinal fluid protein have been reported. Central nervous system complications have included confusion, hallucinations and seizures. Usually these signs and symptoms cleared upon discontinuation of gold therapy.

Hepatitis, jaundice, with or without cholestasis, gold bronchitis, pulmonary injury manifested by interstitial pneumonitis and fibrosis, partial or complete hair loss and fever have also been reported.

Sometimes arthralgia occurs for a day or two after an injection of Gold Sodium Thiomalate; this reaction usually subsides after the first few injections.

For serious renal, hematologic, pulmonary, and enterocolitic complications, high doses of systemic corticosteroids (prednisone 40 to 100 mg daily in divided doses) are recommended. The optimum duration of corticosteroid treatment varies with the response of the individual patient. Therapy may be required for many months when adverse effects are unusually severe or progressive.

In patients whose complications do not improve with high-dose corticosteroid treatment, or who develop significant steroid-related adverse reactions, a chelating agent may be given to enhance gold excretion. Dimercaprol (BAL) has been used successfully, but patients must be monitored carefully as numerous untoward reactions may attend its use. Corticosteroids and a chelating agent may be used concomitantly.

Gold Sodium Thiomalate should not be reinstituted after severe or idiosyncratic reactions.

Gold Sodium Thiomalate may be readministered following resolution of mild reactions, using a reduced dosage schedule. If an initial test dose of 5 mg Gold Sodium Thiomalate is well- tolerated, progressively larger doses (5 to 10 mg increments) may be given at weekly to monthly intervals until a dose of 25 to 50 mg is reached.

Gold Sodium Thiomalate should be administered only by intramuscular injection, preferably intragluteally. It should be given with the patient lying down. He should remain recumbent for approximately 10 minutes after the injection.

Therapeutic effects from Gold Sodium Thiomalate occur slowly. Early improvement, often limited to a reduction in morning stiffness, may begin after six to eight weeks of treatment, but beneficial effects may not be observed until after months of therapy.

Parenteral drug products should be inspected visually for particulate matter and discoloration prior to administration. Do not use if material has darkened. Color should not exceed pale yellow.

For the adult of average size the following dosage schedule is suggested:

3rd and sub sequent injections, 25 to 50 mg until there is toxicity or major clinical improvement, or, in the absence of either of these, the cumulative dose of Gold Sodium Thiomalate reaches one gram.

Gold Sodium Thiomalate is continued until the cumulative dose reaches one gram unless toxicity or major clinical improvement occurs. If significant clinical improvement occurs before a cumulative dose of one gram has been administered, the dose may be decreased or the interval between injections increased as with maintenance therapy. Maintenance doses of 25 to 50 mg every other week for two to 20 weeks are recommended. If the clinical course remains stable, injections of 25 to 50 mg may be given every third and subsequently every fourth week indefinitely. Some patients may require maintenance treatment at intervals of one to three weeks. Should the arthritis exacerbate during maintenance therapy, weekly injections may be resumed temporarily until disease activity is suppressed.

Should a patient fail to improve during initial therapy (cumulative dose of one gram), several options are available.

If significant clinical improvement occurs using option 2 or 3, the maintenance schedule described above should be initiated. If there is no significant improvement or if toxicity occurs, therapy with Gold Sodium Thiomalate should be stopped. The higher the individual dose of Gold Sodium Thiomalate, the greater the risk of gold toxicity. Selection of one of these options for chrysotherapy should be based upon a number of factors, including the physician's experience with gold salt therapy, the course of the patient's condition, the choice of alternative treatments, and the availability of the patient for the close supervision required.

The pediatric dose of Gold Sodium Thiomalate is proportional to the adult dose on a weight basis. After the initial test dose of 10 mg, the recommended dose for children is one mg per kilo gram body weight, not to exceed 50 mg for a single injection. Otherwise, the guidelines given above for administration to adults also apply to children.

Concomitant Drug Therapy—Gold salts should not be used concomitantly with penicillamine.

The safety of coadministration with cytotoxic drugs has not been established. Other measures, such as salicylates, other nonsteroidal anti-inflammatory drugs, or systemic corticosteroids, may be continued when Gold Sodium Thiomalate is initiated. After improvement commences, analgesic and anti-inflammatory drugs may be discontinued slowly as symptoms permit.

MYOCHRYSINE® Injection Gold Sodium Thiomalate is a light yellow to yellow solution, depending on potency, which must be protected from light. It is supplied as follows:

STORAGE: Store at 20° to 25°C (68° to 77°F) [see USP Controlled Room Temperature]. Protect from light. Store container in carton until contents have been used.

For intramuscular injection only.

Do not use intravenously. 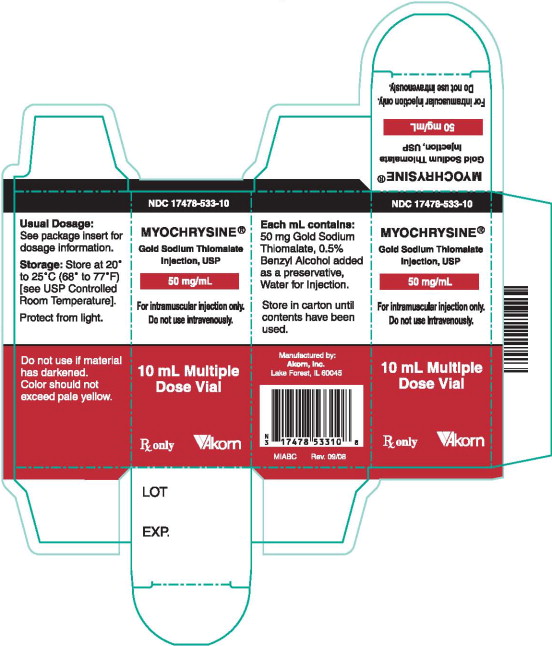