Hydrocodone bitartrate and acetaminophen is supplied in tablet form for oral administration. Hydrocodone bitartrate is an opioid analgesic and antitussive and occurs as fine, white crystals or as a crystalline powder. It is affected by light. The chemical name is 4,5α-Epoxy-3-methoxy-17methylmorphinan-6-one tartrate (1:1) hydrate (2:5). It has the following structural formula:

Acetaminophen, 4´-Hydroxyacetanilide, a slightly bitter, white, odorless, crystalline powder, is a non-opiate, non-salicylate analgesic and antipyretic. It has the following structural formula:

Hydrocodone Bitartrate and Acetaminophen Tablets USP for oral administration are available in a variety of strengths as described in the following table.

Hydrocodone is a semisynthetic narcotic analgesic and antitussive with multiple actions qualitatively similar to those of codeine. Most of these involve the central nervous system and smooth muscle. The precise mechanism of action of hydrocodone and other opiates is not known, although it is believed to relate to the existence of opiate receptors in the central nervous system. In addition to analgesia, narcotics may produce drowsiness, changes in mood and mental clouding.

The analgesic action of acetaminophen involves peripheral influences, but the specific mechanism is as yet undetermined. Antipyretic activity is mediated through hypothalamic heat regulating centers. Acetaminophen inhibits prostaglandin synthetase. Therapeutic doses of acetaminophen have negligible effects on the cardiovascular or respiratory systems; however, toxic doses may cause circulatory failure and rapid, shallow breathing.

Hydrocodone: Following a 10 mg oral dose of hydrocodone administered to five adult male subjects, the mean peak concentration was 23.6 ± 5.2 ng/mL. Maximum serum levels were achieved at 1.3 ± 0.3 hours and the half-life was determined to be 3.8 ± 0.3 hours. Hydrocodone exhibits a complex pattern of metabolism including O-demethylation, N-demethylation and 6-keto reduction to the corresponding 6-α- and 6-β- hydroxy-metabolites. See OVERDOSAGE for toxicity information.

Acetaminophen: Acetaminophen is rapidly absorbed from the gastrointestinal tract and is distributed throughout most body tissues. The plasma half-life is 1.25 to 3 hours, but may be increased by liver damage and following overdosage. Elimination of acetaminophen is principally by liver metabolism (conjugation) and subsequent renal excretion of metabolites.

Approximately 85% of an oral dose appears in the urine within 24 hours of administration, most as the glucuronide conjugate, with small amounts of other conjugates and unchanged drug. See OVERDOSAGE for toxicity information.

Hydrocodone and acetaminophen tablets are indicated for the relief of moderate to moderately severe pain.

There have been post-marketing reports of hypersensitivity and anaphylaxis associated with use of acetaminophen. Clinical signs included swelling of the face, mouth, and throat, respiratory distress, urticaria, rash, pruritus, and vomiting. There were infrequent reports of life-threatening anaphylaxis requiring emergency medical attention. Instruct patients to discontinue Hydrocodone Bitartrate and Acetaminophen Tablets, USP immediately and seek medical care if they experience these symptoms. Do not prescribe Hydrocodone Bitartrate and Acetaminophen Tablets, USP for patients with acetaminophen allergy.

Respiratory Depression: At high doses or in sensitive patients, hydrocodone may produce dose-related respiratory depression by acting directly on the brain stem respiratory center. Hydrocodone also affects the center that controls respiratory rhythm, and may produce irregular and periodic breathing.

Head Injury and Increased Intracranial Pressure: The respiratory depressant effects of narcotics and their capacity to elevate cerebrospinal fluid pressure may be markedly exaggerated in the presence of head injury, other intracranial lesions or a pre-existing increase in intracranial pressure. Furthermore, narcotics produce adverse reactions which may obscure the clinical course of patients with head injuries.

Acute Abdominal Conditions: The administration of narcotics may obscure the diagnosis or clinical course of patients with acute abdominal conditions.

Special Risk Patients: As with any narcotic analgesic agent, hydrocodone bitartrate and acetaminophen tablets should be used with caution in elderly or debilitated patients, and those with severe impairment of hepatic or renal function, hypothyroidism, Addison's disease, prostatic hypertrophy or urethral stricture. The usual precautions should be observed and the possibility of respiratory depression should be kept in mind.

Cough Reflex: Hydrocodone suppresses the cough reflex; as with all narcotics, caution should be exercised when hydrocodone bitartrate and acetaminophen tablets are used postoperatively and in patients with pulmonary disease.

•
•Do not take Hydrocodone Bitartrate and Acetaminophen Tablets, USP if you are allergic to any of its ingredients.

•
•If you develop signs of allergy such as a rash or difficulty breathing stop taking Hydrocodone Bitartrate and Acetaminophen Tablets, USP and contact your healthcare provider immediately.

•
•Do not take more than 4000 milligrams of acetaminophen per day. Call your doctor if you took more than the recommended dose.

Hydrocodone, like all narcotics, may impair the mental and/or physical abilities required for the performance of potentially hazardous tasks such as driving a car or operating machinery; patients should be cautioned accordingly.

Hydrocodone may be habit-forming. Patients should take the drug only for as long as it is prescribed, in the amounts prescribed, and no more frequently than prescribed.

Patients receiving narcotics, antihistamines, antipsychotics, antianxiety agents, or other CNS depressants (including alcohol) concomitantly with hydrocodone bitartrate and acetaminophen tablets may exhibit an additive CNS depression. When combined therapy is contemplated, the dose of one or both agents should be reduced.

Teratogenic Effects: Pregnancy Category C: There are no adequate and well-controlled studies in pregnant women. Hydrocodone bitartrate and acetaminophen tablets should be used during pregnancy only if the potential benefit justifies the potential risk to the fetus.

Nonteratogenic Effects: Babies born to mothers who have been taking opioids regularly prior to delivery will be physically dependent. The withdrawal signs include irritability and excessive crying, tremors, hyperactive reflexes, increased respiratory rate, increased stools, sneezing, yawning, vomiting, and fever. The intensity of the syndrome does not always correlate with the duration of maternal opioid use or dose. There is no consensus on the best method of managing withdrawal.

As with all narcotics, administration of this product to the mother shortly before delivery may result in some degree of respiratory depression in the newborn, especially if higher doses are used.

Clinical studies of hydrocodone bitartrate 5 mg and acetaminophen 500 mg did not include sufficient numbers of subjects aged 65 and over to determine whether they respond differently from younger subjects. Other reported clinical experience has not identified differences in responses between the elderly and younger patients. In general, dose selection for an elderly patient should be cautious, usually starting at the low end of the dosing range, reflecting the greater frequency of decreased hepatic, renal, or cardiac function, and of concomitant disease or other drug therapy.

Hydrocodone and the major metabolites of acetaminophen are known to be substantially excreted by the kidney. Thus the risk of toxic reactions may be greater in patients with impaired renal function due to the accumulation of the parent compound and/or metabolites in the plasma. Because elderly patients are more likely to have decreased renal function, care should be taken in dose selection, and it may be useful to monitor renal function.

Hydrocodone may cause confusion and over-sedation in the elderly; elderly patients generally should be started on low doses of hydrocodone bitartrate and acetaminophen tablets and observed closely.

The most frequently reported adverse reactions are lightheadedness, dizziness, sedation, nausea, and vomiting. These effects seem to be more prominent in ambulatory than in nonambulatory patients, and some of these adverse reactions may be alleviated if the patient lies down.

Genitourinary System: Ureteral spasm, spasm of vesical sphincters, and urinary retention have been reported with opiates.

Special Senses: Cases of hearing impairment or permanent loss have been reported predominantly in patients with chronic overdose.

Abuse and Dependence: Psychic dependence, physical dependence, and tolerance may develop upon repeated administration of narcotics; therefore, this product should be prescribed and administered with caution. However, psychic dependence is unlikely to develop when hydrocodone bitartrate and acetaminophen tablets are used for a short time for the treatment of pain.

Physical dependence, the condition in which continued administration of the drug is required to prevent the appearance of a withdrawal syndrome, assumes clinically significant proportions only after several weeks of continued narcotic use, although some mild degree of physical dependence may develop after a few days of narcotic therapy. Tolerance, in which increasingly large doses are required in order to produce the same degree of analgesia, is manifested initially by a shortened duration of analgesic effect, and subsequently by decreases in the intensity of analgesia. The rate of development of tolerance varies among patients.

Acetaminophen: In acetaminophen overdosage: dose-dependent, potentially fatal hepatic necrosis is the most serious adverse effect. Renal tubular necrosis, hypoglycemic coma and coagulation defects may also occur. Early symptoms following a potentially hepatotoxic overdose may include: nausea, vomiting, diaphoresis and general malaise. Clinical and laboratory evidence of hepatic toxicity may not be apparent until 48 to 72 hours post-ingestion.

Treatment: A single or multiple drug overdose with hydrocodone and acetaminophen is a potentially lethal polydrug overdose, and consultation with a regional poison control center is recommended. Immediate treatment includes support of cardiorespiratory function and measures to reduce drug absorption. Oxygen, intravenous fluids, vasopressors, and other supportive measures should be employed as indicated. Assisted or controlled ventilation should also be considered.

For hydrocodone overdose, primary attention should be given to the reestablishment of adequate respiratory exchange through provision of a patent airway and the institution of assisted or controlled ventilation. The narcotic antagonist naloxone hydrochloride is a specific antidote against respiratory depression which may result from overdosage or unusual sensitivity to narcotics, including hydrocodone. Since the duration of action of hydrocodone may exceed that of the antagonist, the patient should be kept under continued surveillance, and repeated doses of the antagonist should be administered as needed to maintain adequate respiration. A narcotic antagonist should not be administered in the absence of clinically significant respiratory or cardiovascular depression.

Dosage should be adjusted according to the severity of the pain and the response of the patient. However, it should be kept in mind that tolerance to hydrocodone can develop with continued use and that the incidence of untoward effects is dose related.

Hydrocodone Bitartrate and Acetaminophen Tablets USP are available in the following strengths:

Packaged and Distributed by: 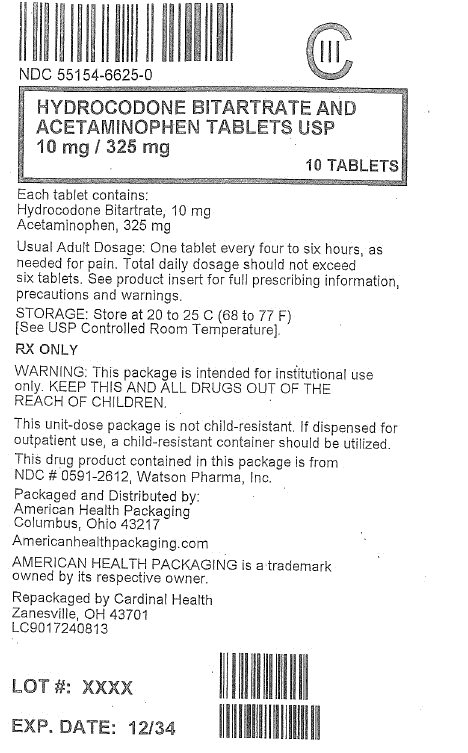