FOR ADDITIVE USE ONLY AFTER

Sodium Acetate Injection, USP 40 mEq (2 mEq/mL) is a sterile, nonpyrogenic, concentrated solution of sodium acetate in water for injection. The solution is administered, after dilution, by the intravenous route as an electrolyte replenisher. It must not be administered undiluted. Each 20 mL contains 3.28 g of sodium acetate (anhydrous) which provides 40 mEq each of sodium (Na+) and acetate (CH3COO−). The solution contains no bacteriostat, antimicrobial agent or added buffer. May contain acetic acid for pH adjustment; the pH is 6.5 (6.0 to 7.0). The osmolar concentration is 4 mOsmol/mL (calc).

The solution is intended as an alternative to sodium chloride to provide sodium ion (Na+) for addition to large volume infusion fluids for intravenous use.

The semi-rigid container is fabricated from a specially formulated polyolefin. It is a copolymer of ethylene and propylene. The safety of the plastic has been confirmed by tests in animals according to USP biological standards for plastic containers. The container requires no vapor barrier to maintain the proper drug concentration.

Acetate (CH3COO− ), a source of hydrogen ion acceptors, is an alternate source of bicarbonate (HCO3−) by metabolic conversion in the liver. This has been shown to proceed readily, even in the presence of severe liver disease.

Sodium Acetate Injection, USP 40 mEq is indicated as a source of sodium, for addition to large volume intravenous fluids to prevent or correct hyponatremia in patients with restricted or no oral intake. It is also useful as an additive for preparing specific intravenous fluid formulas when the needs of the patient cannot be met by standard electrolyte or nutrient solutions.

Sodium Acetate Injection, USP 40 mEq must be diluted before use.

Caution should be exercised in administering sodium-containing solutions to patients with severe renal function impairment, cirrhosis, cardiac failure, or other edematous or sodium-retaining states, as well as in patients with oliguria or anuria.

Pediatric Use: Safety and effectiveness have been established in the age groups infant to adolescent.

Geriatric Use: An evaluation of current literature revealed no clinical experience identifying differences in response between elderly and younger patients. In general, dose selection for an elderly patient should be cautious, usually starting at the low end of the dosing range, reflecting the greater frequency of decreased hepatic, renal, or cardiac function, and of concomitant disease or other drug therapy.

Sodium Acetate Injection, USP 40 mEq is administered intravenously only after dilution in a larger volume of fluid. The dose and rate of administration are dependent upon the individual needs of the patient. Serum sodium should be monitored as a guide to dosage. Using aseptic technique, all or part of the contents of one or more vials may be added to other intravenous fluids to provide any desired number of milliequivalents (mEq) of sodium (Na+) with an equal number of acetate (CH3COO−).

Parenteral drug products should be inspected visually for particulate matter and discoloration prior to administration. See PRECAUTIONS.

Each vial is partially filled to provide air space for complete vacuum withdrawal of the contents into the intravenous container.

CAUTION:
MUST BE DILUTED 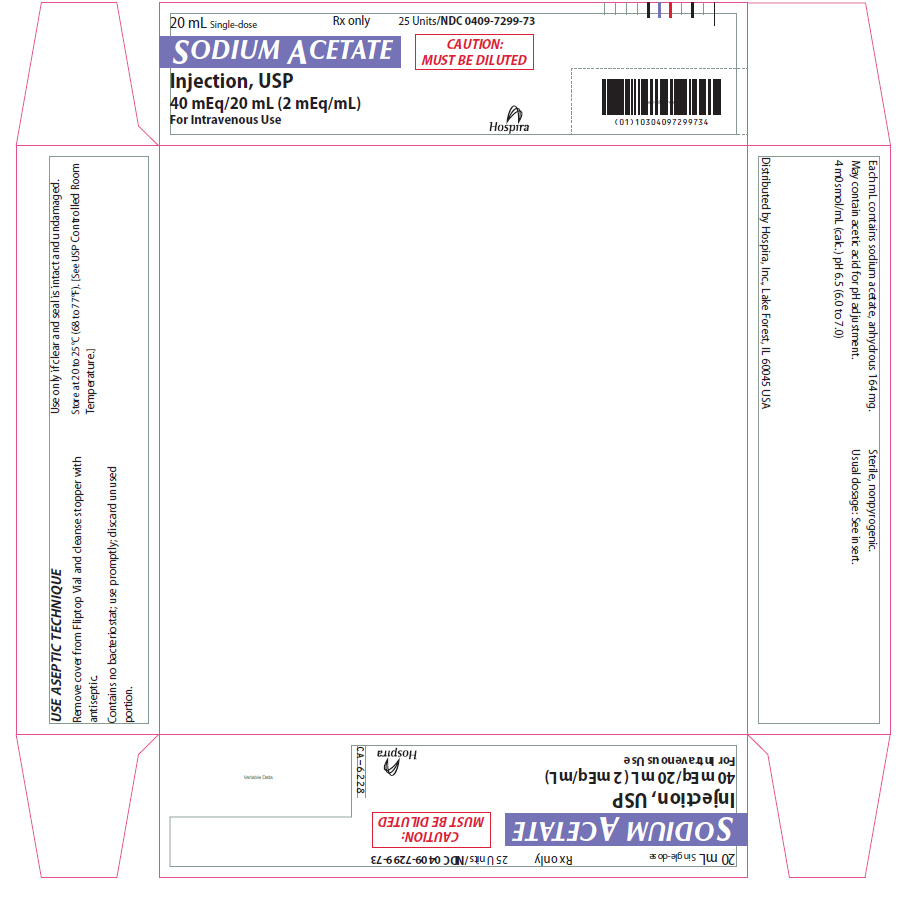