•  The prevention of nausea and/or vomiting associated with initial and repeat courses of emetogenic cancer therapy, including high-dose cisplatin.

2.1 Prevention of Chemotherapy-Induced Nausea and Vomiting

The recommended dosage for Granisetron Hydrochloride Injection is 10 mcg/kg administered intravenously within 30 minutes before initiation of chemotherapy, and only on the day(s) chemotherapy is given.

Granisetron Hydrochloride Injection may be administered intravenously either undiluted over 30 seconds or diluted with 0.9% Sodium Chloride or 5% Dextrose and infused over 5 minutes.

As a general precaution, Granisetron Hydrochloride Injection should not be mixed in solution with other drugs. Parenteral drug products should be inspected visually for particulate matter and discoloration before administration whenever solution and container permit.

Granisetron Hydrochloride Injection is contraindicated in patients with known hypersensitivity (eg. anaphylaxis, shortness of breath, hypotension, urticaria) to the drug or to any of its components.

An adequate QT assessment has not been conducted, but QT prolongation has been reported with granisetron hydrochloride. Therefore, granisetron hydrochloride should be used with caution in patients with pre-existing arrhythmias or cardiac conduction disorders, as this might lead to clinical consequences. Patients with cardiac disease, on cardio-toxic chemotherapy, with concomitant electrolyte abnormalities and/or on concomitant medications that prolong the QT interval are particularly at risk.

Hypersensitivity reactions (eg. anaphylaxis, shortness of breath, hypotension, urticaria) may occur in patients who have exhibited hypersensitivity to other selective 5-HT3 receptor antagonists.

QT prolongation has been reported with granisetron hydrochloride [see Warnings and Precautions (5.2) and Drug Interactions (7)].

In over 3,000 patients receiving Granisetron Hydrochloride Injection (2 to 160 mcg/kg) in single-day and multiple-day clinical trials with emetogenic cancer therapies, adverse events, other than those adverse reactions listed in Table 1, were observed; attribution of many of these events to granisetron hydrochloride is uncertain.

Hepatic: In comparative trials, mainly with cisplatin regimens, elevations of AST and ALT (>2 times the upper limit of normal) following administration of Granisetron Hydrochloride Injection occurred in 2.8% and 3.3% of patients, respectively. These frequencies were not significantly different from those seen with comparators (AST: 2.1%; ALT: 2.4%).

Central Nervous System: Agitation, anxiety, CNS stimulation and insomnia were seen in less than 2% of patients. Extrapyramidal syndrome occurred rarely and only in the presence of other drugs associated with this syndrome.

QT prolongation has been reported with granisetron hydrochloride [see Warnings and Precautions (5.2) and Drug Interactions (7)].

Granisetron does not induce or inhibit the cytochrome P-450 drug-metabolizing enzyme system in vitro. There have been no definitive drug-drug interaction studies to examine pharmacokinetic or pharmacodynamic interaction with other drugs; however, in humans, Granisetron Hydrochloride Injection has been safely administered with drugs representing benzodiazepines, neuroleptics and anti-ulcer medications commonly prescribed with antiemetic treatments. Granisetron Hydrochloride Injection also does not appear to interact with emetogenic cancer chemotherapies. Because granisetron is metabolized by hepatic cytochrome P-450 drug-metabolizing enzymes, inducers or inhibitors of these enzymes may change the clearance and, hence, the half-life of granisetron. In addition, the activity of the cytochrome P-450 subfamily 3A4 (involved in the metabolism of some of the main narcotic analgesic agents) is not modified by granisetron hydrochloride in vitro.

In in vitro human microsomal studies, ketoconazole inhibited ring oxidation of granisetron hydrochloride. However, the clinical significance of in vivo pharmacokinetic interactions with ketoconazole is not known. In a human pharmacokinetic study, hepatic enzyme induction with phenobarbital resulted in a 25% increase in total plasma clearance of intravenous granisetron hydrochloride. The clinical significance of this change is not known.

Serotonin syndrome (including altered mental status, autonomic instability, and neuromuscular symptoms) has been described following the concomitant use of 5-HT3 receptor antagonists and other serotonergic drugs, including selective serotonin reuptake inhibitors (SSRIs) and serotonin and noradrenaline reuptake inhibitors (SNRIs) [see Warnings and Precautions (5.4)].

Safety and efficacy have not been established in pediatric patients for the prevention of postoperative nausea and vomiting (PONV). Granisetron has been evaluated in a pediatric patient clinical trial for use in the prevention of PONV. Due to the lack of efficacy and the QT prolongation observed in this trial, use of granisetron for the prevention of PONV in children is not recommended. The trial was a prospective, multicenter, randomized, double-blind, parallel-group trial that evaluated 157 children aged 2 to 16 years who were undergoing elective surgery for tonsillectomy or adenotonsillectomy. The purpose of the trial was to assess two dose levels (20 mcg/kg and 40 mcg/kg) of intravenous granisetron in the prevention of PONV. There was no active comparator or placebo. The primary endpoint was total control of nausea and vomiting (defined as no nausea, vomiting/retching, or use of rescue medication) in the 24 hours following surgery. Efficacy was not established due to lack of a dose response.

The trial also included standard 12 lead ECGs performed pre-dose and after the induction of anesthesia. ECGs were repeated at the end of surgery after the administration of granisetron and just prior to reversal of anesthesia. QT prolongation was seen at both dose levels. Five patients in this trial experienced an increase of ≥ 60 msec in QTcF. In addition, there were two patients whose QTcF was ≥ 500 msec. Interpretation of the QTcF prolongation was confounded by multiple factors, including the use of concomitant medication and the lack of either a placebo or active control. A thorough QT trial in adults has not been performed.

Other adverse events that occurred in the study included: vomiting (5 to 8%), post-procedural hemorrhage (3 to 5%), and dehydration (0 to 5%).

During chemotherapy clinical trials, 713 patients 65 years of age or older received Granisetron Hydrochloride Injection. The safety and effectiveness were similar in patients of various ages.

Granisetron Hydrochloride Injection is a serotonin-3 (5-HT3) receptor antagonist. Chemically it is endo-N-(9-methyl-9-azabicyclo [3.3.1] non-3-yl)-1-methyl-1H-indazole-3-carboxamide hydrochloride with a molecular weight of 348.9 (312.4 free base). Its empirical formula is C18H24N4O•HCl, while its chemical structure is:

Granisetron hydrochloride is a white to off-white solid that is readily soluble in water and normal saline at 20°C. Granisetron Hydrochloride Injection is a clear, colorless, sterile, nonpyrogenic, aqueous solution for intravenous administration.

Granisetron is a selective 5-hydroxytryptamine3 (5-HT3) receptor antagonist with little or no affinity for other serotonin receptors, including 5-HT1; 5-HT1A; 5-HT1B/C; 5-HT2; for alpha1-, alpha2- or beta-adrenoreceptors; for dopamine-D2; or for histamine-H1; benzodiazepine; picrotoxin or opioid receptors.

Serotonin receptors of the 5-HT3 type are located peripherally on vagal nerve terminals and centrally in the chemoreceptor trigger zone of the area postrema. During chemotherapy-induced vomiting, mucosal enterochromaffin cells release serotonin, which stimulates 5-HT3 receptors. This evokes vagal afferent discharge and may induce vomiting. Animal studies demonstrate that, in binding to 5-HT3 receptors, granisetron blocks serotonin stimulation and subsequent vomiting after emetogenic stimuli such as cisplatin. In the ferret animal model, a single granisetron injection prevented vomiting due to high-dose cisplatin or arrested vomiting within 5 to 30 seconds.

In adult cancer patients undergoing chemotherapy and in volunteers, mean pharmacokinetic data obtained from an infusion of a single 40 mcg/kg dose of Granisetron Hydrochloride Injection are shown in Table 3.

Clearance is predominantly by hepatic metabolism. In normal volunteers, approximately 12% of the administered dose is eliminated unchanged in the urine in 48 hours. The remainder of the dose is excreted as metabolites, 49% in the urine, and 34% in the feces.

There was high inter- and intra-subject variability noted in these studies. No difference in mean AUC was found between males and females, although males had a higher Cmax generally.

The ranges of the pharmacokinetic parameters in elderly volunteers (mean age 71 years), given a single 40 mcg/kg intravenous dose of Granisetron Hydrochloride Injection, were generally similar to those in younger healthy volunteers; mean values were lower for clearance and longer for half-life in the elderly patients (see Table 3).

A pharmacokinetic study in pediatric cancer patients (2 to 16 years of age), given a single 40 mcg/kg intravenous dose of Granisetron Hydrochloride Injection, showed that volume of distribution and total clearance increased with age. No relationship with age was observed for peak plasma concentration or terminal phase plasma half-life. When volume of distribution and total clearance are adjusted for body weight, the pharmacokinetics of granisetron are similar in pediatric and adult cancer patients.

Total clearance of granisetron was not affected in patients with severe renal failure who received a single 40 mcg/kg intravenous dose of Granisetron Hydrochloride Injection.

Because of the tumor findings in rat studies, Granisetron Hydrochloride Injection should be prescribed only at the dose and for the indication recommended [see Indications and Usage (1) and Dosage and Administration (2)].

Granisetron was not mutagenic in an in vitro Ames test and mouse lymphoma cell forward mutation assay, and in vivo mouse micronucleus test and in vitro and ex vivo rat hepatocyte UDS assays. It, however, produced a significant increase in UDS in HeLa cells in vitro and a significant increased incidence of cells with polyploidy in an in vitro human lymphocyte chromosomal aberration test.

Granisetron at subcutaneous doses up to 6 mg/kg/day (36 mg/m2/day, 97 times the recommended human dose based on body surface area) was found to have no effect on fertility and reproductive performance of male and female rats.

In a double-blind, placebo-controlled study in 28 cancer patients, Granisetron Hydrochloride Injection, administered as a single intravenous infusion of 40 mcg/kg, was significantly more effective than placebo in preventing nausea and vomiting induced by cisplatin chemotherapy (see Table 5).

Granisetron Hydrochloride Injection was also evaluated in a double-blind, randomized dose response study of 353 patients stratified for high (≥80 to 120 mg/m2) or low (50 to 79 mg/m2) cisplatin dose. Response rates of patients for both cisplatin strata are given in Table 7.

For both the low and high cisplatin strata, the 10, 20, and 40 mcg/kg doses were more effective than the 5 mcg/kg dose in preventing nausea and vomiting within 24 hours of chemotherapy administration. The 10 mcg/kg dose was at least as effective as the higher doses.

Granisetron Hydrochloride Injection, 40 mcg/kg, was compared with the combination of chlorpromazine (50 to 200 mg/24 hours) and dexamethasone (12 mg) in patients treated with moderately emetogenic chemotherapy, including primarily carboplatin >300 mg/m2, cisplatin 20 to 50 mg/m2 and cyclophosphamide >600 mg/m2. Granisetron Hydrochloride Injection was superior to the chlorpromazine regimen in preventing nausea and vomiting (see Table 8).

In other studies of moderately emetogenic chemotherapy, no significant difference in efficacy was found between granisetron hydrochloride doses of 40 mcg/kg and 160 mcg/kg.

Do not freeze. Protect from light. Retain in carton until time of use.

Patients should be informed that the most common adverse reactions for the indication of chemotherapy induced nausea and vomiting are headache and constipation (see Table 1).

Electrocardiogram changes (QT prolongation) have been reported with the use of Granisetron hydrochloride. Patients should be cautioned about the use of this drug if they have heart problems or take medications for heart problems.

Advise patients of the possibility of serotonin syndrome with concomitant use of granisetron and another serotonergic agent such as medications to treat depression and migraines. Advise patients to seek immediate medical attention if the following symptoms occur: changes in mental status, autonomic instability, neuromuscular symptoms with or without gastrointestinal symptoms. 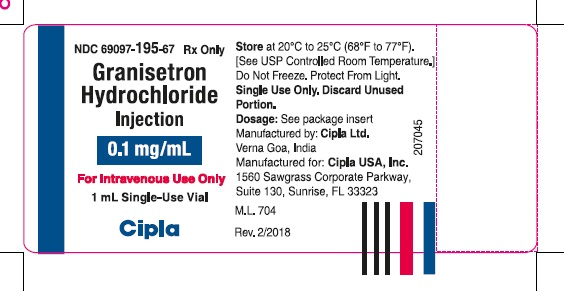 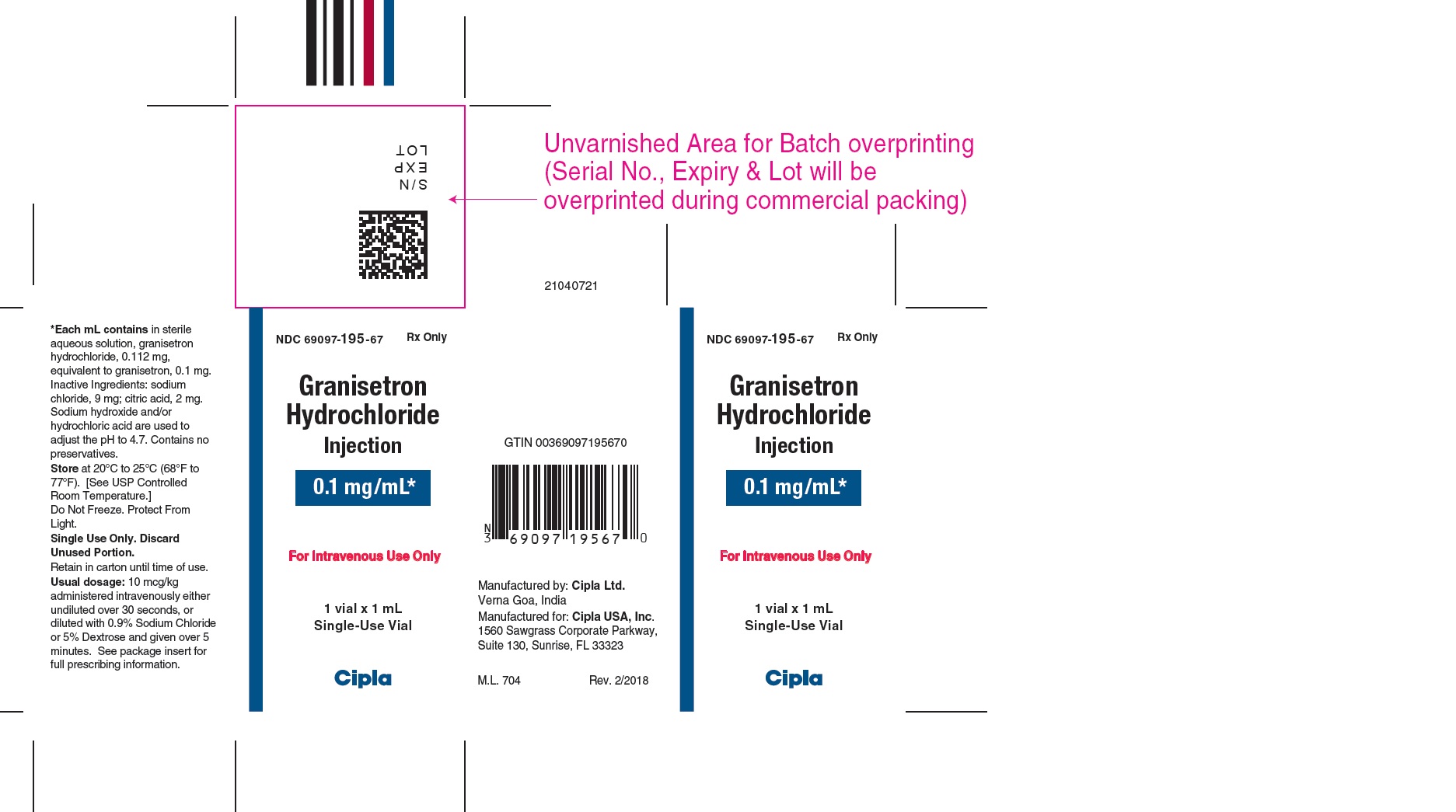 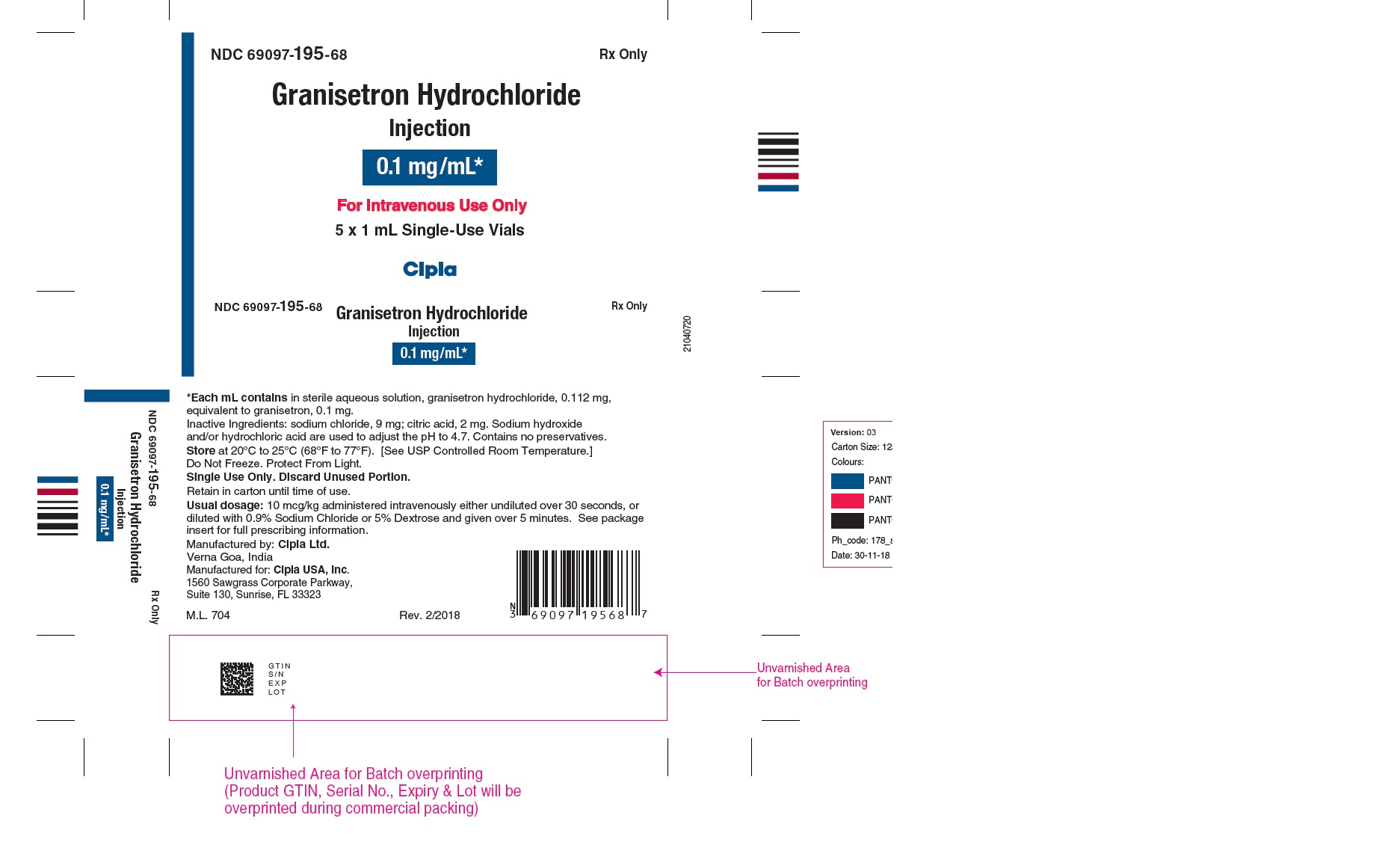