Aminocaproic Acid Injection, USP is a 6-aminohexanoic acid, which acts as an inhibitor of fibrinolysis.

Aminocaproic Acid Injection, USP, for intravenous administration, is a sterile pyrogen-free solution containing 250 mg/mL of aminocaproic acid and Water for Injection. The solution contains no bacteriostat or antimicrobial agent and is intended for use only as a single-dose injection. When smaller doses are required the unused portion should be discarded. Hydrochloric acid may be added to adjust pH to approximately 6.8 during manufacture.

The semi-rigid vial is fabricated from a specifically formulated polyolefin. It is a copolymer of ethylene and propylene. The safety of the plastic has been confirmed by tests in animals according to USP biological standards for plastic containers. The container requires no vapor barrier to maintain the proper drug concentration.

The fibrinolysis-inhibitory effects of aminocaproic acid appear to be exerted principally via inhibition of plasminogen activators and to a lesser degree through antiplasmin activity. In adults, oral absorption appears to be a zero-order process with an absorption rate of 5.2 g/hr. The mean lag time in absorption is 10 minutes. After a single oral dose of 5 g, absorption was complete (F=1). Mean ± SD peak plasma concentrations (164 ± 28 mcg/mL) were reached within 1.2 ± 0.45 hours. After oral administration, the apparent volume of distribution was estimated to be 23.1± 6.6 L (mean ± SD). Correspondingly, the volume of distribution after intravenous administration has been reported to be 30 ± 8.2 L. After prolonged administration, aminocaproic acid has been found to distribute throughout extravascular and intravascular compartments of the body, penetrating human red blood cells as well as other tissue cells.

Renal excretion is the primary route of elimination, whether aminocaproic acid is administered orally or intravenously. Sixty-five percent of the dose is recovered in the urine as unchanged drug and 11% of the dose appears as the metabolite adipic acid. Renal clearance (116 mL/min) approximates endogenous creatinine clearance. The total body clearance is 169 mL/min. The terminal elimination half-life for aminocaproic acid is approximately 2 hours.

Aminocaproic Acid Injection, is useful in enhancing hemostasis when fibrinolysis contributes to bleeding. In life-threatening situations, fresh whole blood transfusions, fibrinogen infusions, and other emergency measures may be required.

When there is uncertainty as to whether the cause of bleeding is primary fibrinolysis or disseminated intravascular coagulation (DIC), this distinction must be made before administering Aminocaproic Acid Injection.

Aminocaproic Acid Injection must not be used in the presence of DIC without concomitant heparin.

In patients with upper urinary tract bleeding, aminocaproic acid administration has been known to cause intrarenal obstruction in the form of glomerular capillary thrombosis or clots in the renal pelvis and ureters. For this reason, Aminocaproic Acid Injection, USP should not be used in hematuria of upper urinary tract origin, unless the possible benefits outweigh the risk.

Aminocaproic Acid Injection, inhibits both the action of plasminogen activators and to a lesser degree, plasmin activity. The drug should NOT be administered without a definite diagnosis and/or laboratory finding indicative of hyperfibrinolysis (hyperplasminemia).*

Inhibition of fibrinolysis by aminocaproic acid may theoretically result in clotting or thrombosis. However, there is no definite evidence that administration of aminocaproic acid has been responsible for the few reported cases of intravascular clotting which followed this treatment. Rather, it appears that such intravascular clotting was most likely due to the patient's pre-existing clinical condition, e.g., the presence of DIC. It has been postulated that extravascular clots formed in vivo may not undergo spontaneous lysis as do normal clots.

The use of Aminocaproic Acid Injection, USP should be accompanied by tests designed to determine the amount of fibrinolysis present. There are presently available: (a) general tests such as those for the determination of the lysis of a clot of blood or plasma; and (b) more specific tests for the study of various phases of fibrinolytic mechanisms. These latter tests include both semiquantitative and quantitative techniques for the determination of profibrinolysin, fibrinolysin, and antifibrinolysin.

Prolongation of the template bleeding time has been reported during continuous intravenous infusion of Aminocaproic Acid Injection at dosages exceeding 24 g/day. Platelet function studies in these patients have not demonstrated any significant platelet dysfunction. However, in vitro studies have shown that at high concentrations (7.4 mMol/L or 0.97 mg/mL and greater) EACA inhibits ADP and collagen-induced platelet aggregation, the release of ATP and serotonin, and the binding of fibrinogen to the platelets in a concentration-response manner. Following a 10 g bolus of Aminocaproic Acid Injection, transient peak plasma concentrations of 4.6 mMol/L or 0.60 mg/mL have been obtained. The concentration of aminocaproic acid necessary to maintain inhibition of fibrinolysis is 0.99 mMol/L or 0.13 mg/mL. Administration of a 5 g bolus followed by 1 to 1.25 g/hr should achieve and sustain plasma levels of 0.13 mg/mL. Thus, concentrations which have been obtained in vivo clinically in patients with normal renal function are considerably lower than the in vitro concentrations found to induce abnormalities in platelet function tests. However, higher plasma concentrations of aminocaproic acid may occur in patients with severe renal failure.

Urogenital: BUN increased, renal failure. There have been some reports of dry ejaculation during the period of Aminocaproic Acid Injection treatment. These have been reported to date only in hemophilia patients who received the drug after undergoing dental surgical procedures. However, this symptom resolved in all patients within 24 to 48 hours of completion of therapy.

For the treatment of acute bleeding syndromes due to elevated fibrinolytic activity, it is suggested that 16 to 20 mL (4 to 5 g) of aminocaproic acid in 250 mL of diluent be administered by infusion during the first hour of treatment, followed by a continuing infusion at the rate of 4 mL (1 g) per hour in 50 mL of diluent. This method of treatment would ordinarily be continued for about 8 hours or until the bleeding situation has been controlled.

Parenteral drug products should be inspected visually for particulate matter and discoloration prior to administration, whenever solution and container permit. Do not administer unless the solution is clear and seal is intact. Discard unused portion.

CAUTION: MUST BE DILUTED. FOR I.V. USE.

CAUTION: MUST BE DILUTED. FOR INTRAVENOUS USE. 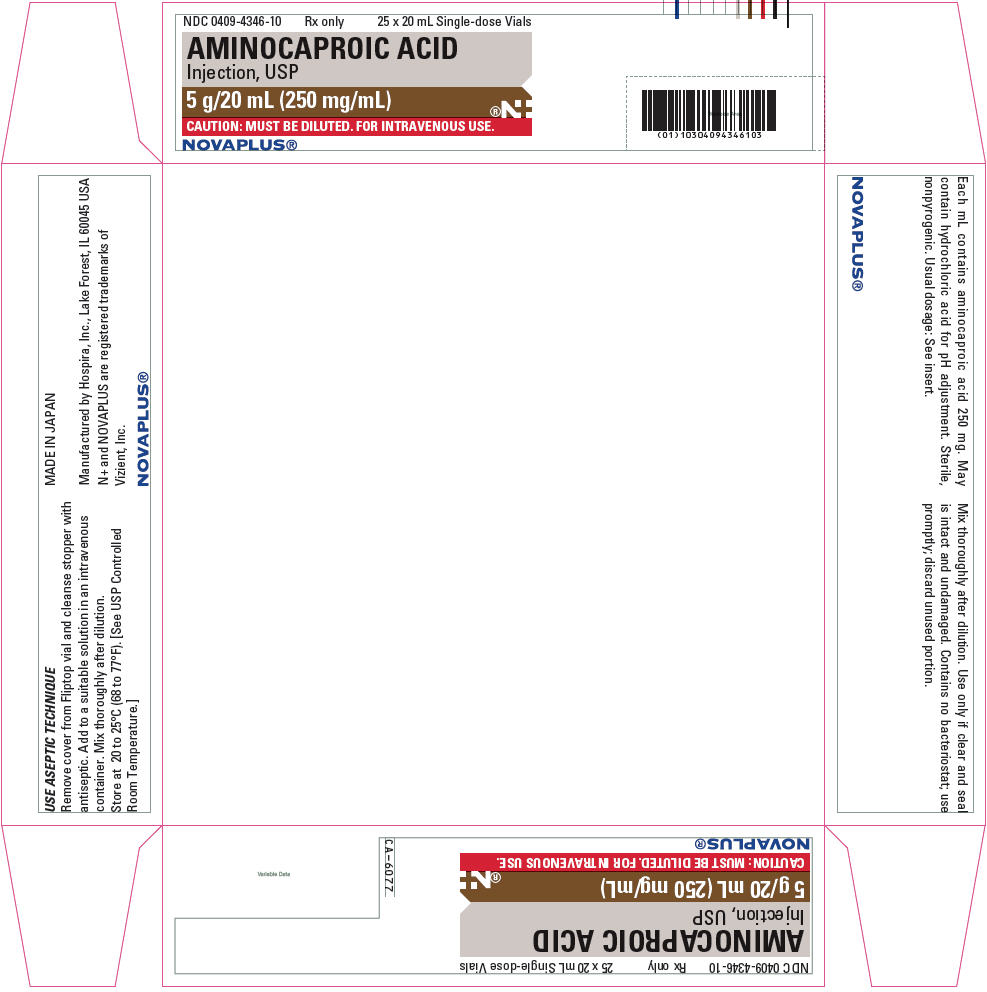