TIMOPTIC1 (timolol maleate ophthalmic solution) is a non-selective beta-adrenergic receptor blocking agent. Its chemical name is (-)-1-(tert-butylamino)-3- [(4-morpholino-1, 2, 5-thiadiazol-3-yl)oxy]-2-propanol maleate (1:1) (salt). Timolol maleate possesses an asymmetric carbon atom in its structure and is provided as the levo-isomer. The optical rotation of timolol maleate is:

Its molecular formula is C13H24N4O3S•C4H4O4 and its structural formula is:

Timolol maleate has a molecular weight of 432.50. It is a white, odorless, crystalline powder which is soluble in water, methanol, and alcohol. TIMOPTIC is stable at room temperature.

Beta-adrenergic receptor blockade in the bronchi and bronchioles results in increased airway resistance from unopposed parasympathetic activity. Such an effect in patients with asthma or other bronchospastic conditions is potentially dangerous.

The precise mechanism of the ocular hypotensive action of TIMOPTIC is not clearly established at this time. Tonography and fluorophotometry studies in man suggest that its predominant action may be related to reduced aqueous formation. However, in some studies a slight increase in outflow facility was also observed.

In these studies, TIMOPTIC was generally well tolerated and produced fewer and less severe side effects than either pilocarpine or epinephrine. A slight reduction of resting heart rate in some patients receiving TIMOPTIC (mean reduction 2.9 beats/minute standard deviation 10.2) was observed.

TIMOPTIC Ophthalmic Solution is indicated in the treatment of elevated intraocular pressure in patients with ocular hypertension or open-angle glaucoma.

As with many topically applied ophthalmic drugs, this drug is absorbed systemically.

The same adverse reactions found with systemic administration of beta-adrenergic blocking agents may occur with topical administration. For example, severe respiratory reactions and cardiac reactions, including death due to bronchospasm in patients with asthma, and rarely death in association with cardiac failure, have been reported following systemic or ophthalmic administration of timolol maleate (see CONTRAINDICATIONS).

Sympathetic stimulation may be essential for support of the circulation in individuals with diminished myocardial contractility, and its inhibition of beta-adrenergic receptor blockade may precipitate more severe failure.

In Patients Without a History of Cardiac Failure continued depression of the myocardium with beta-blocking agents over a period of time can, in some cases, lead to cardiac failure. At the first sign or symptom of cardiac failure, TIMOPTIC should be discontinued.

Patients with chronic obstructive pulmonary disease (e.g., chronic bronchitis, emphysema) of mild or moderate severity, bronchospastic disease, or a history of bronchospastic disease (other than bronchial asthma or a history of bronchial asthma, in which TIMOPTIC is contraindicated [see CONTRAINDICATIONS]) should, in general, not receive beta-blockers, including TIMOPTIC.

If necessary during surgery, the effects of beta-adrenergic blocking agents may be reversed by sufficient doses of adrenergic agonists.

Because of potential effects of beta-adrenergic blocking agents on blood pressure and pulse, these agents should be used with caution in patients with cerebrovascular insufficiency. If signs or symptoms suggesting reduced cerebral blood flow develop following initiation of therapy with TIMOPTIC, alternative therapy should be considered.

There have been reports of bacterial keratitis associated with the use of multiple-dose containers of topical ophthalmic products. These containers had been inadvertently contaminated by patients who, in most cases, had a concurrent corneal disease or a disruption of the ocular epithelial surface. (See PRECAUTIONS, Information for Patients.)

Choroidal detachment after filtration procedures has been reported with the administration of aqueous suppressant therapy (e.g. timolol).

Patients should be instructed to avoid allowing the tip of the dispensing container to contact the eye or surrounding structures.

Patients should also be instructed that ocular solutions, if handled improperly or if the tip of the dispensing container contacts the eye or surrounding structures, can become contaminated by common bacteria known to cause ocular infections. Serious damage to the eye and subsequent loss of vision may result from using contaminated solutions. (See PRECAUTIONS, General.)

Patients should also be advised that if they have ocular surgery or develop an intercurrent ocular condition (e.g., trauma or infection), they should immediately seek their physician's advice concerning the continued use of the present multidose container.

Although TIMOPTIC used alone has little or no effect on pupil size, mydriasis resulting from concomitant therapy with TIMOPTIC and epinephrine has been reported occasionally.

Close observation of the patient is recommended when a beta blocker is administered to patients receiving catecholamine-depleting drugs such as reserpine, because of possible additive effects and the production of hypotension and/or marked bradycardia, which may result in vertigo, syncope, or postural hypotension.

The concomitant use of beta-adrenergic blocking agents with digitalis and calcium antagonists may have additive effects in prolonging atrioventricular conduction time.

In a two-year study of timolol maleate administered orally to rats, there was a statistically significant increase in the incidence of adrenal pheochromocytomas in male rats administered 300 mg/kg/day (approximately 42,000 times the systemic exposure following the maximum recommended human ophthalmic dose). Similar differences were not observed in rats administered oral doses equivalent to approximately 14,000 times the maximum recommended human ophthalmic dose.

The increased occurrence of mammary adenocarcinomas was associated with elevations in serum prolactin which occurred in female mice administered oral timolol at 500 mg/kg/day, but not at doses of 5 or 50 mg/kg/day. An increased incidence of mammary adenocarcinomas in rodents has been associated with administration of several other therapeutic agents that elevate serum prolactin, but no correlation between serum prolactin levels and mammary tumors has been established in humans. Furthermore, in adult human female subjects who received oral dosages of up to 60 mg of timolol maleate (the maximum recommended human oral dosage), there were no clinically meaningful changes in serum prolactin.

Timolol maleate was devoid of mutagenic potential when tested in vivo (mouse) in the micronucleus test and cytogenetic assay (doses up to 800 mg/kg) and in vitro in a neoplastic cell transformation assay (up to 100 mcg/mL). In Ames tests the highest concentrations of timolol employed, 5,000 or 10,000 mcg/plate, were associated with statistically significant elevations of revertants observed with tester strain TA100 (in seven replicate assays), but not in the remaining three strains. In the assays with tester strain TA100, no consistent dose response relationship was observed, and the ratio of test to control revertants did not reach 2. A ratio of 2 is usually considered the criterion for a positive Ames test.

Reproduction and fertility studies in rats demonstrated no adverse effect on male or female fertility at doses up to 21,000 times the systemic exposure following the maximum recommended human ophthalmic dose.

There are no adequate and well-controlled studies in pregnant women. TIMOPTIC should be used during pregnancy only if the potential benefit justifies the potential risk to the fetus.

Timolol maleate has been detected in human milk following oral and ophthalmic drug administration. Because of the potential for serious adverse reactions from TIMOPTIC in nursing infants, a decision should be made whether to discontinue nursing or to discontinue the drug, taking into account the importance of the drug to the mother.

The most frequently reported adverse experiences have been burning and stinging upon instillation (approximately one in eight patients).

The following additional adverse experiences have been reported less frequently with ocular administration of this or other timolol maleate formulations:

BODY AS A WHOLE

Alopecia and psoriasiform rash or exacerbation of psoriasis.

Signs and symptoms of systemic allergic reactions, including anaphylaxis, angioedema, urticaria, and localized and generalized rash.

There have been reports of inadvertent overdosage with TIMOPTIC Ophthalmic Solution resulting in systemic effects similar to those seen with systemic beta-adrenergic blocking agents such as dizziness, headache, shortness of breath, bradycardia, bronchospasm, and cardiac arrest (see also ADVERSE REACTIONS).

Since in some patients the pressure-lowering response to TIMOPTIC may require a few weeks to stabilize, evaluation should include a determination of intraocular pressure after approximately 4 weeks of treatment with TIMOPTIC.

No. 812 — TIMOPTIC Ophthalmic Solution, 0.25% timolol equivalent, is supplied in an OCUMETER®3 PLUS container, a white, translucent, HDPE plastic ophthalmic dispenser with a controlled drop tip and a white polystyrene cap as follows:

No. 813 — TIMOPTIC Ophthalmic Solution, 0.5% timolol equivalent, is supplied in an OCUMETER® PLUS container, a white translucent, HDPE plastic ophthalmic dispenser with a controlled drop tip and a white polystyrene cap as follows:

Please follow these instructions carefully when using TIMOPTIC4 . Use TIMOPTIC as prescribed by your doctor.

1.
If you use other topically applied ophthalmic medications, they should be administered at least 10 minutes before or after TIMOPTIC.
2.
Wash hands before each use.
3.
Before using the medication for the first time, be sure the Safety Strip on the front of the bottle is unbroken. A gap between the bottle and the cap is normal for an unopened bottle. 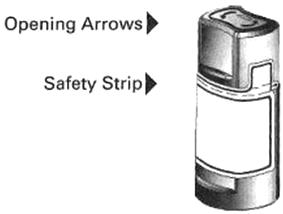 4.
Tear off the Safety Strip to break the seal. 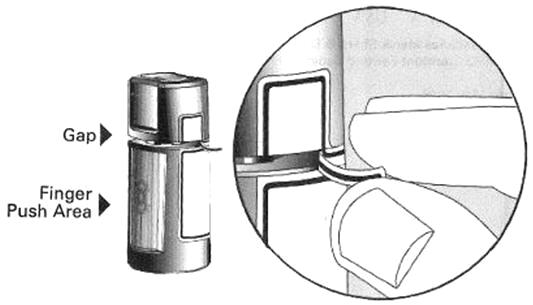 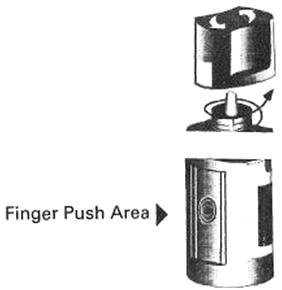 6.
Tilt your head back and pull your lower eyelid down slightly to form a pocket between your eyelid and your eye. 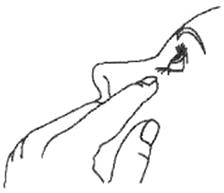 7.
Invert the bottle, and press lightly with the thumb or index finger over the "Finger Push Area" (as shown) until a single drop is dispensed into the eye as directed by your doctor.

DO NOT TOUCH YOUR EYE OR EYELID WITH THE DROPPER TIP.

•
If drop dispensing is difficult after opening for the first time, replace the cap on the bottle and tighten (DO NOT OVERTIGHTEN) and then remove by turning the cap in the opposite direction as indicated by the arrows on the top of the cap.
•
Repeat steps 6 & 7 with the other eye if instructed to do so by your doctor.
•
Replace the cap by turning until it is firmly touching the bottle. The arrow on the left side of the cap must be aligned with the arrow on the left side of the bottle label for proper closure. Do not overtighten or you may damage the bottle and cap.
•
The dispenser tip is designed to provide a single drop; therefore, do NOT enlarge the hole of the dispenser tip.
•
After you have used all doses, there will be some TIMOPTIC left in the bottle. You should not be concerned since an extra amount of TIMOPTIC has been added and you will get the full amount of TIMOPTIC that your doctor prescribed. Do not attempt to remove excess medicine from the bottle.

WARNING: Keep out of reach of children.

If you have any questions about the use of TIMOPTIC, please consult your doctor. 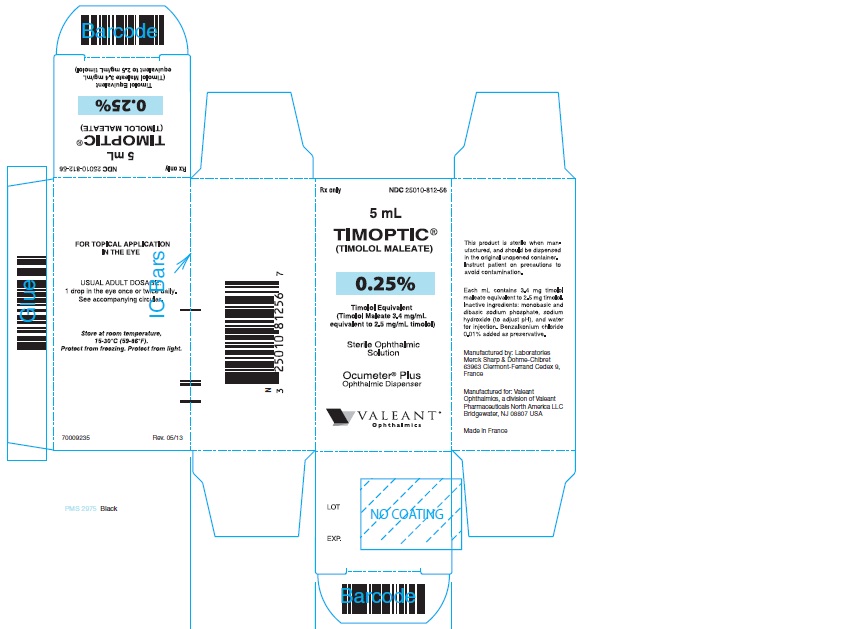 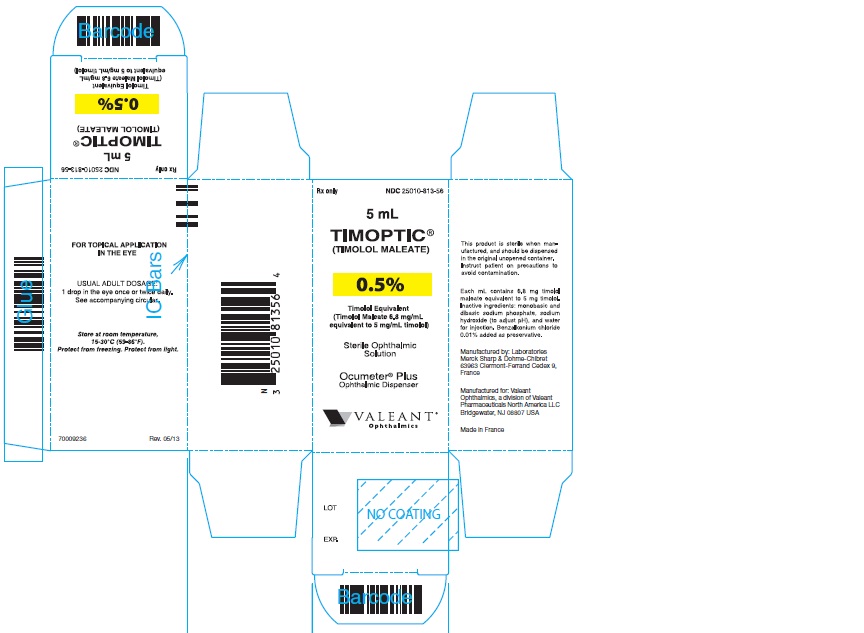