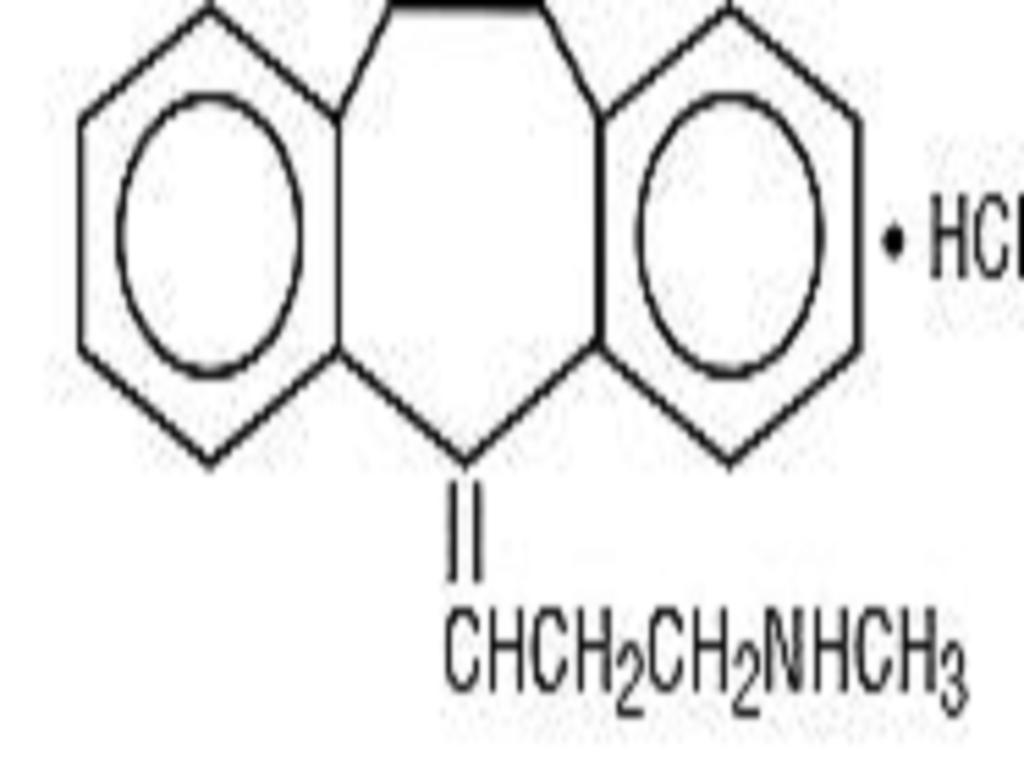 Nortriptyline hydrochloride capsules are indicated for the relief of symptoms of depression. Endogenous depressions are more likely to be alleviated than are other depressive states.

Cross-sensitivity between nortriptyline and other dibenzazepines is a possibility.

Nortriptyline hydrochloride is contraindicated during the acute recovery period after myocardial infarction.

AgeDrug-Placebo Difference in Number of CasesRangeof Suicidality per 1000 Patients TreatedIncreases Compared to Placebo< 1814 additional cases18-245 additional casesDecreases Compared to Placebo25-641 fewer case656 fewer casesNo suicides occurred in any of the pediatric trials. There were suicides in the adult trials, but the number was not sufficient to reach any conclusion about drug effect on suicide.

It is unknown whether the suicidality risk extends to longer-term use, i.e., beyond several months. However, there is substantial evidence from placebo-controlled maintenance trials in adults with depression that the use of antidepressants can delay the recurrence of depression.

All patients being treated with antidepressants for any indication should be monitored appropriately and observed closely for clinical worsening, suicidality, and unusual changes in behavior, especially during the initial few months of a course of drug therapy, or at times of dose changes, either increases or decreases.

The following symptoms, anxiety, agitation, panic attacks, insomnia, irritability, hostility, aggressiveness, impulsivity, akathisia (psychomotor restlessness), hypomania, and mania, have been reported in adult and pediatric patients being treated with antidepressants for major depressive disorder as well as for other indications, both psychiatric and nonpsychiatric. Although a causal link between the emergence of such symptoms and either the worsening of depression and/or the emergence of suicidal impulses has not been established, there is concern that such symptoms may represent precursors to emerging suicidality.

Consideration should be given to changing the therapeutic regimen, including possibly discontinuing the medication, in patients whose depression is persistently worse, or who are experiencing emergent suicidality or symptoms that might be precursors to worsening depression or suicidality, especially if these symptoms are severe, abrupt in onset, or were not part of the patient's presenting symptoms.

Families and caregivers of patients being treated with antidepressants for major depressive disorder or other indications, both psychiatric and nonpsychiatric, should be alerted about the need to monitor patients for the emergence of agitation, irritability, unusual changes in behavior, and the other symptoms described above, as well as the emergence of suicidality, and to report such symptoms immediately to health care providers.Such monitoring should include daily observation by families and caregivers. Prescriptions for nortriptyline hydrochloride capsules should be written for the smallest quantity of capsules consistent with good patient management, in order to reduce the risk of overdose.

Excessive consumption of alcohol in combination with nortriptyline therapy may have a potentiating effect, which may lead to the danger of increased suicidal attempts or overdosage, especially in patients with histories of emotional disturbances or suicidal ideation.

The concomitant administration of quinidine and nortriptyline may result in a significantly longer plasma half-life, higher AUC, and lower clearance of nortriptyline.

Prescribers or other health professionals should inform patients, their families, and their caregivers about the benefits and risks associated with treatment with nortriptyline hydrochloride capsules and should counsel them in its appropriate use. A patient Medication Guide aboutAntidepressant Medicines, Depression and other Serious Mental Illnesses, and Suicidal Thoughts or Actionsis available for nortriptyline hydrochloride capsules. The prescriber or health professional should instruct patients, their families, and their caregivers to read the Medication Guide and should assist them in understanding its contents. Patients should be given the opportunity to discuss the contents of the Medication Guide and to obtain answers to any questions they may have. The complete text of the Medication Guide is reprinted at the end of this document.

Patients should be advised of the following issues and asked to alert their prescriber if these occur while taking nortriptyline hydrochloride capsules.

Patients, their families, and their caregivers should be encouraged to be alert to the emergence of anxiety, agitation, panic attacks, insomnia, irritability, hostility, aggressiveness, impulsivity, akathisia (psychomotor restlessness), hypomania, mania, other unusual changes in behavior, worsening of depression, and suicidal ideation, especially early during antidepressant treatment and when the dose is adjusted up or down. Families and caregivers of patients should be advised to look for the emergence of such symptoms on a day-to-day basis, since changes may be abrupt. Such symptoms should be reported to the patient's prescriber or health professional, especially if they are severe, abrupt in onset, or were not part of the patient's presenting symptoms. Symptoms such as these may be associated with an increased risk for suicidal thinking and behavior and indicate a need for very close monitoring and possibly changes in the medication.

Troublesome patient hostility may be aroused by the use of nortriptyline hydrochloride. Epileptiform seizures may accompany its administration, as is true of other drugs of its class.

When it is essential, the drug may be administered with electroconvulsive therapy, although the hazards may be increased. Discontinue the drug for several days, if possible, prior to elective surgery.

Both elevation and lowering of blood sugar levels have been reported.

Administration of reserpine during therapy with a tricyclic antidepressant has been shown to produce a "stimulating" effect in some depressed patients.

Close supervision and careful adjustment of the dosage are required when nortriptyline hydrochloride is used with other anticholinergic drugs and sympathomimetic drugs.

A case of significant hypoglycemia has been reported in a type II diabetic patient maintained on chlorpropamide (250 mg/day), after the addition of nortriptyline (125 mg/day).

Safety and effectiveness in the pediatric population have not been established (see BOX WARNING and WARNINGS, Clinical Worsening and Suicide Risk). Anyone considering the use of nortriptyline hydrochloride capsules in a child or adolescent must balance the potential risks with the clinical need.

Clinical studies of nortriptyline hydrochloride did not include sufficient numbers of subjects aged 65 and over to determine whether they respond differently from younger subjects. Other reported clinical experience indicates that, as with other tricyclic antidepressants, hepatic adverse events (characterized mainly by jaundice and elevated liver enzymes) are observed very rarely in geriatric patients and deaths associated with cholestatic liver damage have been reported in isolated instances. Cardiovascular function, particularly arrhythmias and fluctuations in blood pressure, should be monitored. There have also been reports of confusional states following tricyclic antidepressant administration in the elderly. Higher plasma concentrations of the active nortriptyline metabolite, 10-hydroxynortriptyline, have also been reported in elderly patients. As with other tricyclic antidepressants, dose selection for an elderly patient should usually be limited to the smallest effective total daily dose (see DOSAGE AND ADMINISTRATION).

Note - Included in the following list are a few adverse reactions that have not been reported with this specific drug. However, the pharmacologic similarities among the tricyclic antidepressant drugs require that each of the reactions be considered when nortriptyline is administered.

Withdrawal Symptoms - Though these are not indicative of addiction, abrupt cessation of treatment after prolonged therapy may produce nausea, headache, and malaise.

Deaths may occur from overdosage with this class of drugs. Multiple drug ingestion (including alcohol) is common in deliberate tricyclic antidepressant overdose. As the management is complex and changing, it is recommended that the physician contact a poison control center for current information on treatment. Signs and symptoms of toxicity develop rapidly after tricyclic antidepressant overdose, therefore, hospital monitoring is required as soon as possible.

Other signs of overdose may include: confusion, restlessness, disturbed concentration, transient visual hallucinations, dilated pupils, agitation, hyperactive reflexes, stupor, drowsiness, muscle rigidity, vomiting, hypothermia, hyperpyrexia, or any of the acute symptoms listed under ADVERSE REACTIONS. There have been reports of patients recovering from nortriptyline overdoses of up to 525 mg.

Gastrointestinal Decontamination
All patients suspected of tricyclic antidepressant overdose should receive gastrointestinal decontamination. This should include large volume gastric lavage followed by activated charcoal. If consciousness is impaired, the airway should be secured prior to lavage. EMESIS IS CONTRAINDICATED.

Cardiovascular
A maximal limb-lead QRS duration of0.10 seconds may be the best indication of the severity of the overdose. Intravenous sodium bicarbonate should be used to maintain the serum pH in the range of 7.45 to 7.55. If the pH response is inadequate, hyperventilation may also be used. Concomitant use of hyperventilation and sodium bicarbonate should be done with extreme caution, with frequent pH monitoring. A pH > 7.60 or a pCO2 < 20 mmHg is undesirable. Dysrhythmias unresponsive to sodium bicarbonate therapy/hyperventilation may respond to lidocaine, bretylium or phenytoin. Type 1A and 1C antiarrhythmics are generally contraindicated (e.g., quinidine, disopyramide, and procainamide).

CNS
In patients with CNS depression, early intubation is advised because of the potential for abrupt deterioration. Seizures should be controlled with benzodiazepines, or if these are ineffective, other anticonvulsants (e.g., phenobarbital, phenytoin). Physostigmine is not recommended except to treat life-threatening symptoms that have been unresponsive to other therapies, and then only in consultation with a poison control center

Psychiatric Follow-up
Since overdosage is often deliberate, patients may attempt suicide by other means during the recovery phase. Psychiatric referral may be appropriate.

Pediatric Management
The principles of management of child and adult overdosages are similar. It is strongly recommended that the physician contact the local poison control center for specific pediatric treatment.

Nortriptyline hydrochloride is not recommended for children.

Lower than usual dosages are recommended for elderly patients and adolescents. Lower dosages are also recommended for outpatients than for hospitalized patients who will be under close supervision. The physician should initiate dosage at a low level and increase it gradually, noting carefully the clinical response and any evidence of intolerance. Following remission, maintenance medication may be required for a longer period of time at the lowest dose that will maintain remission.

If a patient develops minor side effects, the dosage should be reduced. The drug should be discontinued promptly if adverse effects of a serious nature or allergic manifestations occur.

30 to 50 mg/day, in divided doses, or the total daily dosage may be given once a day.

Nortriptyline hydrochloride capsules USP, equivalent to 10 mg, 25 mg, 50 mg or 75 mg base, are available as follows:

Dispense contents in a tight container as defined in the USP, with a child-resistant closure (as required). 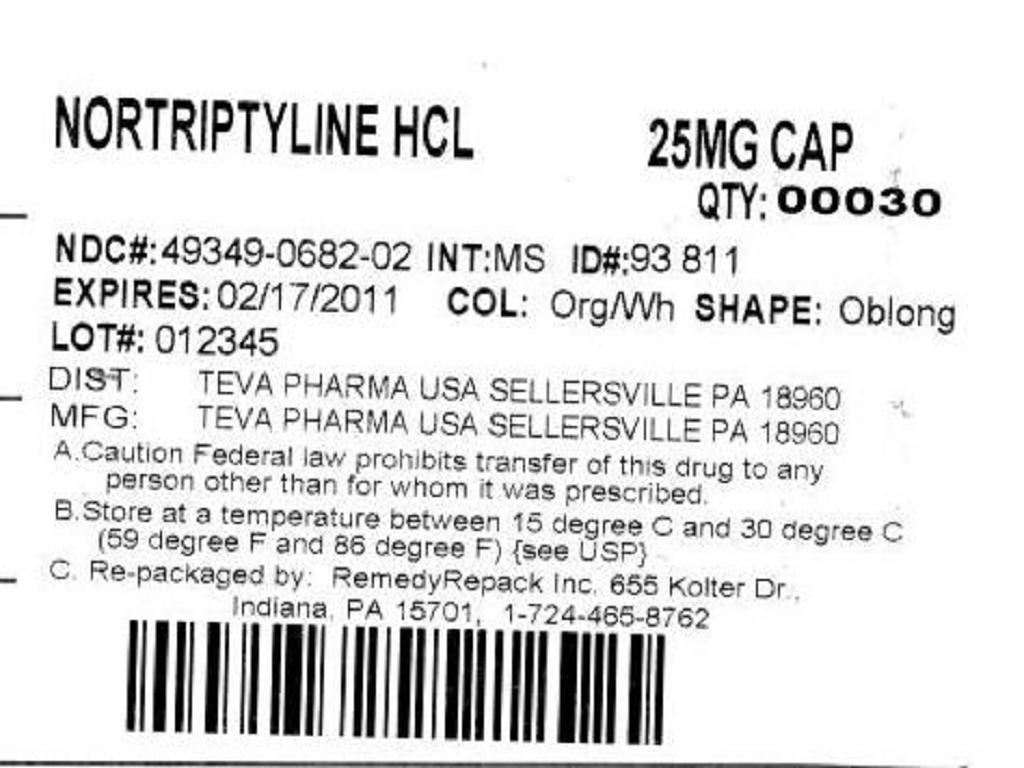 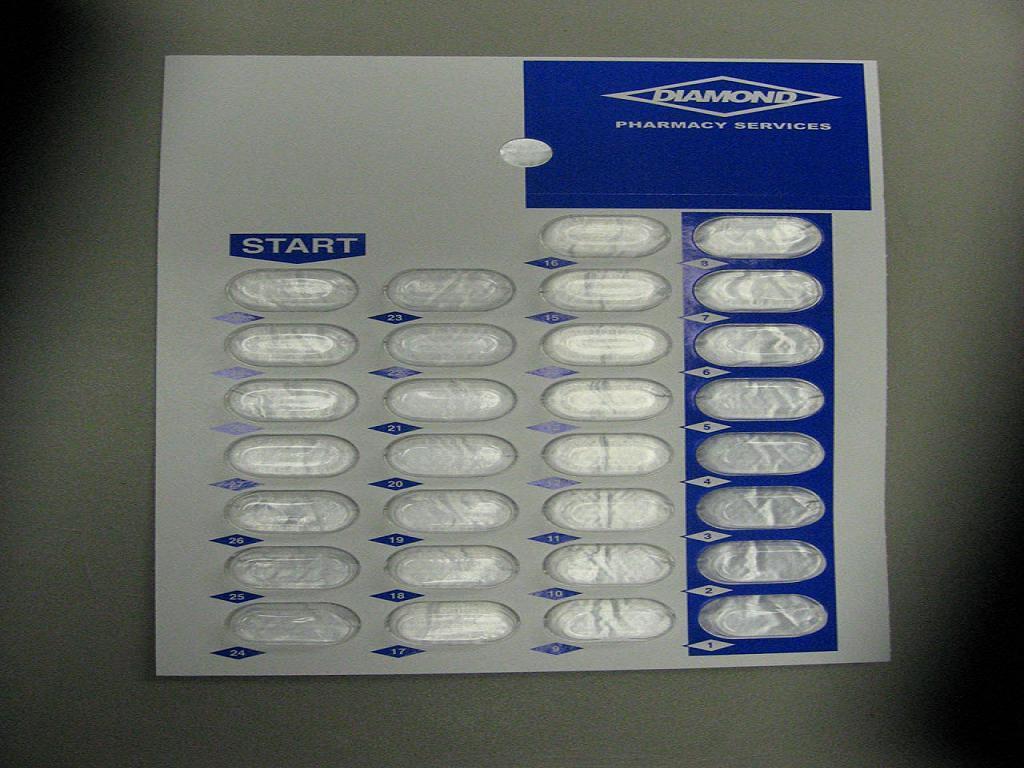