Dicloxacillin exerts a bactericidal action against penicillin-susceptible microorganisms during the state of active multiplication. All penicillins inhibit the biosynthesis of the bacterial cell wall.

Quantitative methods of susceptibility testing that require measurements of zone diameters or minimal inhibitory concentrations (MICs) give the most precise estimates of antibiotic susceptibility. One such procedure has been recommended for use with discs to test susceptibility to this class of drugs. Interpretations correlate diameters on the disc test with MIC values.

A penicillinase-resistant class disc may be used to determine microbial susceptibility to dicloxacillin.

Methicillin sodium is readily destroyed by gastric acidity and must be administered by intramuscular or intravenous injection. The isoxazolyl penicillins (cloxacillin, dicloxacillin and oxacillin) and nafcillin are more acid-resistant and may be administered orally.

Absorption of the isoxazolyl penicillins after oral administration is rapid but incomplete; peak blood levels are achieved in 1-1.5 hours. In one study, after ingestion of a single 500 mg oral dose, peak serum concentrations range from 5-7 micrograms/milliliter for oxacillin, from 7.5-14.4 mcg/mL for cloxacillin and from 10-17 mcg/mL for dicloxacillin.

Oral absorption of cloxacillin, dicloxacillin, oxacillin and nafcillin is delayed when the drugs are administered after meals.

Once absorbed, the penicillinase-resistant penicillins bind to serum protein, mainly albumin. The degree of protein binding reported varies with the method of study and the investigator (see TABLE II).

The penicillinase-resistant penicillins are rapidly excreted, primarily as unchanged drug in the urine by glomerular filtration and active tubular secretion. The elimination half-life for dicloxacillin is about 0.7 hour. Nonrenal elimination includes hepatic inactivation and excretion in bile.

To reduce the development of drug-resistant bacteria and maintain the effectiveness of dicloxacillin sodium capsules USP and other antibacterial drugs, dicloxacillin sodium capsules USP should be used only to treat or prevent infections that are proven or strongly suspected to be caused by susceptible bacteria. When culture and susceptibility information are available, they should be considered in selecting or modifying antibacterial therapy. In the absence of such data, local epidemiology and susceptibility patterns may contribute to the empiric selection of therapy.

A history of a hypersensitivity (anaphylactic) reaction to any penicillin is a contraindication.

When penicillin therapy is indicated, it should be initiated only after a comprehensive patient drug and allergy history has been obtained. If an allergic reaction occurs, the drug should be discontinued and the patient should receive supportive treatment, e.g., artificial maintenance of ventilation, pressor amines, antihistamines and corticosteroids. Individuals with a history of penicillin hypersensitivity may also experience allergic reactions when treated with a cephalosporin.

Prescribing dicloxacillin sodium capsules USP in the absence of a proven or strongly suspected bacterial infection or a prophylactic indication is unlikely to provide benefit to the patient and increases the risk of the development of drug-resistant bacteria.

Dicloxacillin should generally not be administered to patients with a history of sensitivity to any penicillin.

Penicillin should be used with caution in individuals with histories of significant allergies and/or asthma. Whenever allergic reactions occur, penicillin should be withdrawn unless, in the opinion of the physician, the condition being treated is life-threatening and amenable only to penicillin therapy.

The oral route of administration should not be relied upon in patients with severe illness, or with nausea, vomiting, gastric dilatation, cardiospasm or intestinal hypermotility. Occasionally, patients will not absorb therapeutic amounts of orally administered penicillin.

The use of antibiotics may result in overgrowth of nonsusceptible organisms. If new infections due to bacteria or fungi occur, the drug should be discontinued and appropriate measures taken.

Bacteriologic studies to determine the causative organisms and their susceptibility to the penicillinase-resistant penicillins should be performed (see CLINICAL PHARMACOLOGY - Microbiology). In the treatment of suspected staphylococcal infections, therapy should be changed to another active agent if culture tests fail to demonstrate the presence of staphylococci.

Periodic assessment of organ system function, including renal, hepatic and hematopoietic, should be made during prolonged therapy with the penicillinase-resistant penicillins.

Blood cultures, white blood cell and differential cell counts should be obtained prior to initiation of therapy and at least weekly during therapy with penicillinase-resistant penicillins.

Periodic urinalysis, blood urea nitrogen and creatinine determinations should be performed during therapy with the penicillinase-resistant penicillins and dosage alterations should be considered if these values become elevated. If any impairment of renal function is suspected or known to exist, a reduction in the total dosage should be considered and blood levels monitored to avoid possible neurotoxic reactions (see DOSAGE AND ADMINISTRATION).

SGOT and SGPT values should be obtained periodically during therapy to monitor for possible liver function abnormalities.

Reproduction studies performed in the mouse, rat and rabbit have revealed no evidence of impaired fertility or harm to the fetus due to the penicillinase-resistant penicillins. Human experience with the penicillins during pregnancy has not shown any positive evidence of adverse effects on the fetus. There are, however, no adequate or well-controlled studies in pregnant women showing conclusively that harmful effects of these drugs on the fetus can be excluded. Because animal reproduction studies are not always predictive of human response, this drug should be used during pregnancy only if clearly needed.

Because of incompletely developed renal function in newborns, penicillinase-resistant penicillins (especially methicillin) may not be completely excreted, with abnormally high blood levels resulting. Frequent monitoring of blood levels is advisable in this group, with dosage adjustments when necessary. All newborns treated with penicillins should be monitored closely for clinical and laboratory evidence of toxic or adverse effects (see DOSAGE AND ADMINISTRATION).

The reported incidence of allergic reactions to penicillin ranges from 0.7% to 10% (see WARNINGS). Sensitization is usually the result of treatment, but some individuals have had immediate reactions to penicillin when first treated. In such cases, it is thought that the patients may have had prior exposure to the drug via trace amounts present in milk and vaccines.

Immediate reactions usually occur within 20 minutes of administration and range in severity from urticaria and pruritus to angioneurotic edema, laryngospasm, bronchospasm, hypotension, vascular collapse and death. Such immediate anaphylactic reactions are very rare (see WARNINGS) and usually occur after parenteral therapy, but have occurred in patients receiving oral therapy. Another type of immediate reaction, an accelerated reaction, may occur between 20 minutes and 48 hours after administration and may include urticaria, pruritus and fever. Although laryngeal edema, laryngospasm and hypotension occasionally occur, fatality is uncommon.

Neurotoxic reactions similar to those observed with penicillin G may occur with large intravenous doses of the penicillinase-resistant penicillins, especially with patients with renal insufficiency.

Renal tubular damage and interstitial nephritis have been associated with the administration of methicillin sodium and, infrequently, with the administration of nafcillin and oxacillin. Manifestations of this reaction may include rash, fever, eosinophilia, hematuria, proteinuria and renal insufficiency. Methicillin-induced nephropathy does not appear to be dose-related and is generally reversible upon prompt discontinuation of therapy.

Bacteriologic studies to determine the causative organisms and their sensitivity to the penicillinase-resistant penicillins should always be performed. Duration of therapy varies with the type and severity of infection as well as the overall condition of the patient, therefore it should be determined by the clinical and bacteriological response of the patient. In severe staphylococcal infections, therapy with penicillinase-resistant penicillins should be continued for at least 14 days. Therapy should be continued for at least 48 hours after the patient has become afebrile, asymptomatic and cultures are negative. The treatment of endocarditis and osteomyelitis may require a longer term of therapy.

Probenecid decreases the apparent volume of distribution and slows the rate of excretion by competitively inhibiting renal tubular secretion of penicillin. Penicillin-probenecid therapy is generally limited to those infections where very high serum levels of penicillin are necessary.

Oral preparations of the penicillinase-resistant penicillins should not be used as initial therapy in serious, life-threatening infections (see PRECAUTIONS - General). Oral therapy with the penicillinase-resistant penicillins may be used to follow up the previous use of a parenteral agent as soon as the clinical condition warrants. For intramuscular gluteal injections, care should be taken to avoid sciatic nerve injury. With intravenous administration, particularly in elderly patients, care should be taken because of the possibility of thrombophlebitis.

NB: INFECTIONS CAUSED BY GROUP A BETA-HEMOLYTIC STREPTOCOCCI SHOULD BE TREATED FOR AT LEAST 10 DAYS TO HELP PREVENT THE OCCURRENCE OF ACUTE RHEUMATIC FEVER OR ACUTE GLOMERULONEPHRITIS.

250 mg: Each capsule contains dicloxacillin sodium monohydrate equivalent to 250 mg dicloxacillin, with green colored cap and light green colored body, imprinted "TEVA" on the cap and “3123” on the body, available in bottles of 100.

500 mg: Each capsule contains dicloxacillin sodium monohydrate equivalent to 500 mg dicloxacillin, with green colored cap and light green colored body, imprinted "TEVA" on the cap and “3125” on the body, available in bottles of 100.

Manufactured In Canada By: 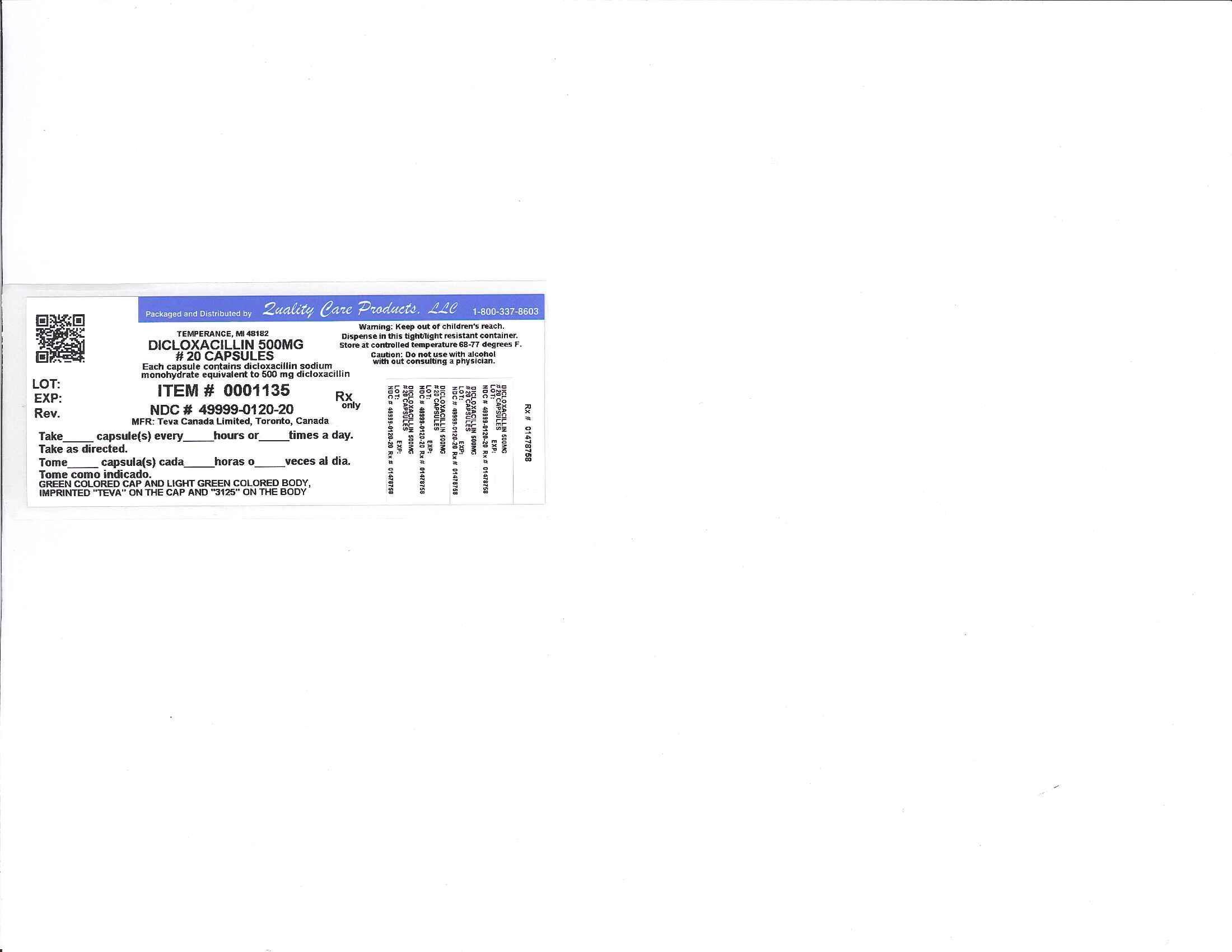