Chemically, metaxalone is 5-[(3,5- dimethylphenoxy) methyl]-2-oxazolidinone. The empirical formula is C 12H 15NO 3, which corresponds to a molecular weight of 221.25. The structural formula is: 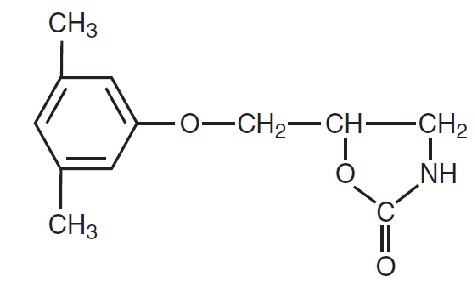 The mechanism of action of metaxalone in humans has not been established, but may be due to general central nervous system (CNS) depression. Metaxalone has no direct action on the contractile mechanism of striated muscle, the motor end plate or the nerve fiber.

A randomized, two-way, crossover study was conducted in 42 healthy volunteers (31 males, 11 females) administered one 400 mg metaxalone tablet under fasted conditions and following a standard high-fat breakfast. Subjects ranged in age from 18 to 48 years (mean age = 23.5 ± 5.7 years). Compared to fasted conditions, the presence of a high fat meal at the time of drug administration increased C max by 177.5% and increased AUC (AUC 0-t, AUC ∞) by 123.5% and 115.4%, respectively. Time-to-peak concentration (T max) was also delayed (4.3 h versus 3.3 h) and terminal half-life was decreased (2.4 h versus 9.0 h) under fed conditions compared to fasted. 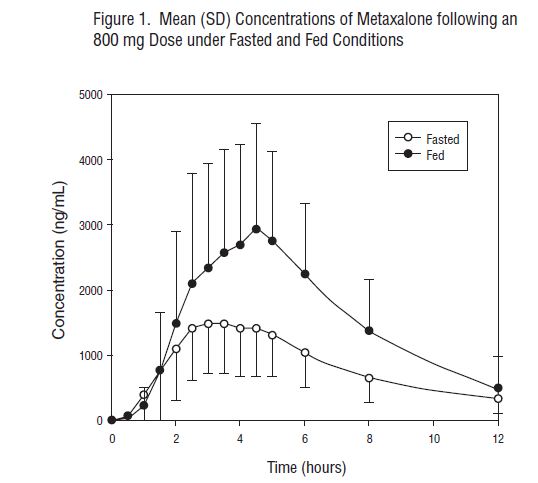 The effect of gender on the pharmacokinetics of metaxalone was assessed in an open label study, in which 48 healthy adult volunteers (24 males, 24 females) were administered two metaxalone 400 mg tablets (800 mg) under fasted conditions. The bioavailability of metaxalone was significantly higher in females compared to males as evidenced by C max (2,115 ng/mL versus 1,335 ng/mL) and AUC ∞ (17,884 ng·h/mL versus 10,328 ng·h/mL). The mean half-life was 11.1 hours in females and 7.6 hours in males. The apparent volume of distribution of metaxalone was approximately 22% higher in males than in females, but not significantly different when adjusted for body weight. Similar findings were also seen when the previously described combined dataset was used in the analysis.