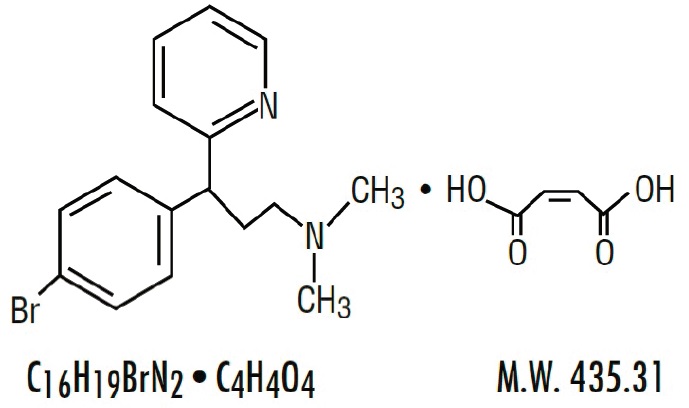 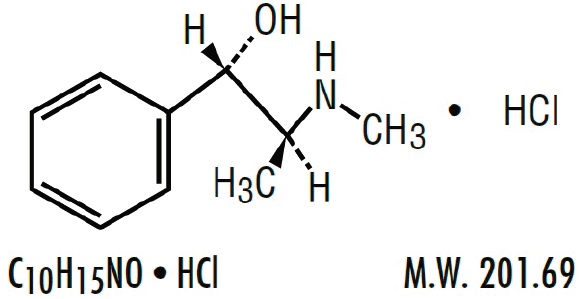 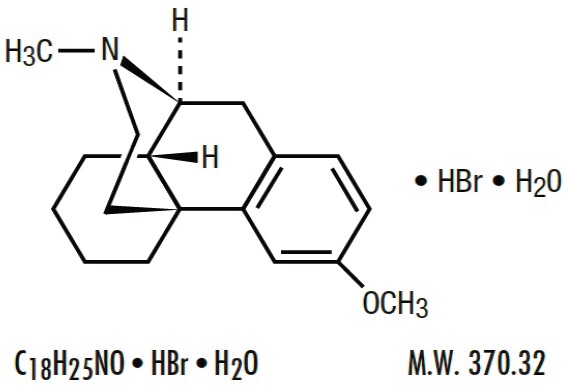 Brompheniramine maleate is a histamine antagonist, specifically an H1-receptor-blocking agent belonging to the alkylamine class of antihistamines. Antihistamines appear to compete with histamine for receptor sites on effector cells. Brompheniramine also has anticholinergic (drying) and sedative effects. Among the antihistaminic effects, it antagonizes the allergic response (vasodilation, increased vascular permeability, increased mucus secretion) of nasal tissue. Brompheniramine is well absorbed from the gastrointestinal tract, with peak plasma concentration after single, oral dose of 4 mg reached in 5 hours; urinary excretion is the major route of elimination, mostly as products of biodegradation; the liver is assumed to be the main site of metabolic transformation.


Pseudoephedrine acts on sympathetic nerve endings and also on smooth muscle, making it useful as a nasal decongestant. The nasal decongestant effect is mediated by the action of pseudoephedrine on α- sympathetic receptors, producing vasoconstriction of the dilated nasal arterioles. Following oral administration, effects are noted within 30 minutes with peak activity occurring at approximately one hour.


Dextromethorphan acts centrally to elevate the threshold for coughing. It has no analgesic or addictive properties. The onset of antitussive action occurs in 15 to 30 minutes after administration and is of long duration.

For relief of coughs and upper respiratory symptoms, including nasal congestion, associated with allergy or the common cold.

Hypersensitivity to any of the ingredients. Do not use in the newborn, in premature infants, in nursing mothers, or in patients with severe hypertension or severe coronary artery disease. Do not use dextromethorphan in patients receiving monoamine oxidase (MAOI) inhibitors (see PRECAUTIONS - Drug Interactions).


Antihistamines should not be used to treat lower respiratory tract conditions including asthma.

Especially in infants and small children, antihistamines in overdosage may cause hallucinations, convulsions, and death.


Antihistamines may diminish mental alertness. In the young child, they may produce excitation.

Patients should be warned about engaging in activities requiring mental alertness, such as driving a car or operating dangerous machinery.

Monoamine oxidase (MAO) inhibitors
Hyperpyrexia, hypotension, and death have been reported coincident with the coadministration of MAO inhibitors and products containing dextromethorphan. In addition, MAO inhibitors prolong and intensify the anticholinergic (drying) effects of antihistamines and may enhance the effect of pseudoephedrine. Concomitant administration of brompheniramine maleate, pseudoephedrine hydrochloride, and dextromethorphan hydrobromide syrup and MAO inhibitors should be avoided (see CONTRAINDICATIONS).

Animal studies of Brompheniramine maleate, pseudoephedrine hydrochloride, and dextromethorphan hydrobromide syrup to assess the carcinogenic and mutagenic potential or the effect on fertility have not been performed.

Because of the higher risk of intolerance of antihistamines in small infants generally, and in newborns and prematures in particular, brompheniramine maleate, pseudoephedrine hydrochloride, and dextromethorphan hydrobromide syrup is contraindicated in nursing mothers.

Safety and effectiveness in pediatric patients below the age of 6 months have not been established (see DOSAGE AND ADMINISTRATION).

Clinical studies of brompheniramine maleate, pseudoephedrine hydrochloride and dextromethorphan hydrobromide syrup did not include sufficient numbers of subjects aged 65 and over to determine whether they respond differently from younger subjects. However, antihistamines are more likely to cause dizziness, sedation, and hypotension in elderly patients. The elderly are also more likely to experience adverse reactions to sympathomimetics.


In general, dose selection for an elderly patient should be cautious, usually starting at the low end of the dosing range, reflecting the greater frequency of decreased hepatic, renal, or cardiac function, and of concomitant disease or other drug therapy.

The most frequent adverse reactions to brompheniramine maleate, pseudoephedrine hydrochloride, and dextromethorphan hydrobromide syrup are: sedation; dryness of mouth, nose and throat; thickening of bronchial secretions; dizziness. Other adverse reactions may include:


Respiratory System: Tightness of chest and wheezing, shortness of breath.

Signs and Symptoms
Central nervous system effects from overdosage of brompheniramine may vary from depression to stimulation, especially in children. Anticholinergic effects may be noted. Toxic doses of pseudoephedrine may result in CNS stimulation, tachycardia, hypertension, and cardiac arrhythmias; signs of CNS depression may occasionally be seen. Dextromethorphan in toxic doses will cause drowsiness, ataxia, nystagmus, opisthotonos, and convulsive seizures.


Toxic Doses
Data suggest that individuals may respond in an unexpected manner to apparently small amounts of a particular drug. A 2½-year-old child survived the ingestion of 21 mg/kg of dextromethorphan exhibiting only ataxia, drowsiness, and fever, but seizures have been reported in 2 children following the ingestion of 13-17 mg/kg. Another 2½-year-old child survived a dose of 300-900 mg of brompheniramine. The toxic dose of pseudoephedrine should be less than that of ephedrine, which is estimated to be 50 mg/kg.


Treatment
Induce emesis if patient is alert and is seen prior to 6 hours following ingestion. Precautions against aspiration must be taken, especially in infants and small children. Gastric lavage may be carried out, although in some instances tracheostomy may be necessary prior to lavage. Naloxone hydrochloride 0.005 mg/kg intravenously may be of value in reversing the CNS depression that may occur from an overdose of dextromethorphan. CNS stimulants may counter CNS depression.Should CNS hyperactivity or convulsive seizures occur, intravenous shortacting barbiturates may be indicated. Hypertensive responses and/or tachycardia should be treated appropriately. Oxygen, intravenous fluids, and other supportive measures should be employed as indicated.


Do not exceed 6 doses during a 24-hour period.

Dispense in a tight, light-resistant container as defined in the USP 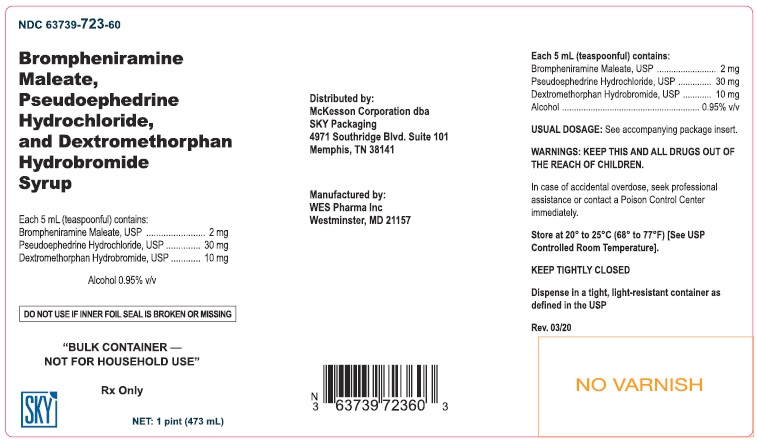