Ciprofloxacin
Ophthalmic Solution USP,
0.3% as base

Ciprofloxacin ophthalmic solution USP, 0.3% is a synthetic, sterile, multiple dose, antimicrobial for topical use. Ciprofloxacin is a fluoroquinolone antibacterial active against a broad spectrum of gram-positive and gram-negative ocular pathogens. It is available as the monohydrochloride monohydrate salt of 1-cyclopropyl-6-fluoro-1,4-dihydro-4-oxo-7-(1-piperazinyl)-3-quinoline-carboxylic acid. It is a faint to light yellow crystalline powder with a molecular weight of 385.8. Its empirical formula is C17H18FN3O3• HCl•H2O and its chemical structure is as follows:

Ciprofloxacin differs from other quinolones in that it has a fluorine atom at the 6-position, a piperazine moiety at the 7-position,and a cyclopropyl ring at the 1-position.

A systemic absorption study was performed in which ciprofloxacin ophthalmic solution USP, 0.3% was administered in each eye every two hours while awake for two days followed by every four hours while awake for an additional 5 days. The maximum reported plasma concentration of ciprofloxacin was less than 5 ng/mL. The mean concentration was usually less than 2.5 ng/mL.

Ciprofloxacin does not cross-react with other antimicrobial agents such as beta-latams or aminoglycosides; therefore, organisms resistant to these drugs may be susceptible to ciprofloxacin.

Following therapy with ciprofloxacin ophthalmic solution USP, 0.3%, 76% of the patients with corneal ulcers and positive bacterial cultures were clinically cured and complete re-epithelialization occurred in about 92% of the ulcers.

Ciprofloxacin ophthalmic solution USP, 0.3% is indicated for the treatment of infections caused by susceptible strains of the designated microorganisms in the conditions listed below:

Pregnancy Category C: Reproduction studies have been performed in rats and mice at doses up to six times the usual daily human oral dose and have revealed no evidence of impaired fertility or harm to the fetus due to ciprofloxacin. In rabbits, as with most antimicrobial agents, ciprofloxacin (30 and 100 mg/kg orally) produced gastrointestinal disturbances resulting in maternal weight loss and an increased incidence of abortion. No teratogenicity was observed at either dose. After intravenous administration, at doses up to 20 mg/kg, no maternal toxicity was produced and no embryotoxicity or teratogenicity was observed. There are no adequate and well controlled studies in pregnant women. Ciprofloxacin ophthalmic solution USP, 0.3% should be used during pregnancy only if the potential benefit justifies the potential risk to the fetus.

A topical overdose of ciprofloxacin ophthalmic solution USP, 0.3% may be flushed from the eye(s) with warm tap water.

As a sterile ophthalmic solution: 2.5 mL, 5 mL and 10 mL in LDPE bottles with an LDPE tip and polypropylene cap. 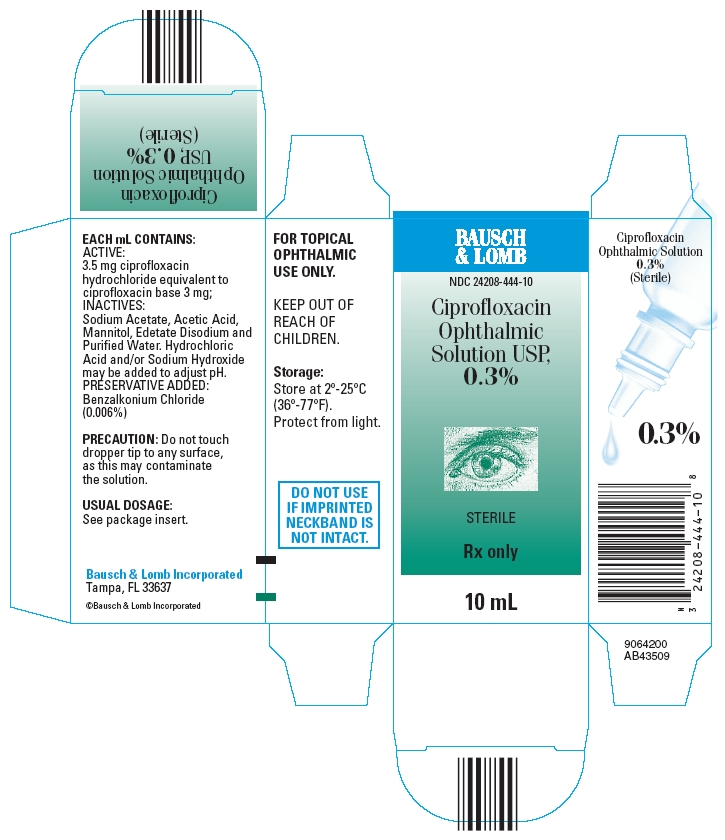