pH (range 2.3-2.7) may be adjusted with Sulfuric Acid and/or Sodium Hydroxide.

ZINC is an essential nutritional requirement that serves as a cofactor for more than 70 different enzymes including carbonic anhydrase, alkaline phosphatase, lactic dehydrogenase, and both RNA and DNA polymerase. Zinc facilitates wound healing, helps maintain normal skin hydration, and senses of taste and smell.

The initial manifestations of hypozincemia in TPN patients are diarrhea, apathy, and depression. At plasma levels below 20 mcg zinc/100 mL, dermatitis followed by alopecia has been reported for TPN patients. Normal zinc plasma levels are 100 ± 12 mcg/100 mL.

MANGANESE is an essential nutrient that serves as an activator for enzymes such as polysaccharide polymerase, liver arginase, cholinesterase, and pyruvate carboxylase.

Providing manganese during TPN prevents development of the following deficiency symptoms: nausea and vomiting, weight loss, dermatitis, and changes in growth and color of hair. Under conditions of minimal intake, 20 mcg manganese/day is retained. Manganese is bound to a specific transport protein, transmanganin, a β1-globulin. Manganese is widely distributed but concentrates in the mitochondria-rich tissues such as brain, kidney, pancreas, and liver. Assay for manganese in whole blood results in concentrations ranging from 6 to 12 mcg manganese/liter. Excretion of manganese occurs mainly through the bile, but in the event of obstruction, ancillary excretion routes include pancreatic juice, or return to the lumen of duodenum, jejunum, or ileum. Urinary excretion of manganese is negligible.

Serum chromium is bound to transferrin (siderophilin) in the β-globulin fraction. Typical blood levels for chromium range from 1 to 5 mcg/liter, but blood levels are not considered a meaningful index of tissue stores. Administration of chromium supplements to chromium-deficient patients can result in normalization of the glucose tolerance curve from the diabetic-like curve typical of chromium deficiency. This response is viewed as a more meaningful indicator of chromium nutriture than serum chromium levels.

Excretion of chromium is via the kidneys, ranging from 3 to 50 mcg/day. Biliary excretion via the small intestine may be an ancillary route, but it is believed that only small amounts of chromium are excreted in this matter.

MULTITRACE® - 4 NEONATAL should not be given undiluted by direct injection into a peripheral vein because of the potential of infusion phlebitis.

MULTITRACE® - 4 NEONATAL is a hypotonic solution which should be administered in admixtures only. Supplementation of TPN solutions with Neonatal Formula should be immediately discontinued if toxicity symptoms due to any of the constituent trace elements in Neonatal Formula is observed in the patient.

1. Before administering MULTITRACE® - 4 NEONATAL in TPN solutions, the physician must assess the metabolic requirements of trace elements and disease state of the patient. Frequent determinations of serum levels of the four trace elements are suggested as a guideline for adjusting the dosage or completely omitting MULTITRACE® - 4 NEONATAL. ZINC is eliminated via the intestine and kidneys; COPPER and MANGANESE are eliminated via the bile; and CHROMIUM primarily via the kidneys. The possibility of their retention should be considered in patients with malfunctioning excretory routes of the respective trace elements.

2. Syringes equipped with aluminum needles or hubs should not be used, as the solution is acidic.

The amounts of ZINC, COPPER, MANGANESE, and CHROMIUM in MULTITRACE® - 4 NEONATAL are very small and toxicity symptoms due to these trace elements at suggested dosage levels are considered unlikely to occur.

Single intravenous doses of 1 to 2 mg zinc/kg body weight have been given to adult leukemia patients without toxic manifestations. However, acute toxicity was reported in an adult when 10 mg zinc was infused over a period of one hour on each of four consecutive days. Profuse sweating, decreased level of consciousness, blurred vision, tachycardia (140/min.), and marked hypothermia (94.2ºF) on the fourth day were accompanied by a serum zinc concentration of 207 mcg/mL. Symptoms abated within three hours. Hyperamylasemia may be a sign of impending zinc overdosage; patients receiving an inadvertent overdose (25 mg zinc/liter of TPN solution, equivalent to 50 to 70 mg zinc/day) developed hyperamylasemia (557 to 1850 Klein units; normal: 130-310).

Death resulted from an overdose in which 1683 mg zinc was delivered intravenously over the course of 60 hours to a 72 year old patient. Symptoms of ZINC toxicity included hypotension (80/40 mm Hg), pulmonary edema, diarrhea, vomiting, jaundice, and oliguria, with a serum zinc level of 4184 mcg/100 mL. Calcium supplements may confer a protective effect against zinc toxicity.

COPPER toxicity can produce prostration, behavior change, diarrhea, progressive marasmus, hypotonia, photophobia and peripheral edema. Such symptoms have been reported with a serum copper level of 286 mcg/100 mL. D-penicillamine has been reported effective as an antidote.

MANGANESE toxicity in TPN patients has not been reported within the prescribed dosage.

Trivalent CHROMIUM administered intravenously to TPN patients has been shown to be nontoxic when given at dosage levels of up to 250 mcg/day for two consecutive weeks.

Reported toxic reactions to chromium include nausea, vomiting, ulcers and gastrointestinal tract, renal and hepatic damage, convulsions, and coma. The acute LD50 for intravenous trivalent chromium was reported as 10 to 18 mg/kg.

The suggested dosage ranges for the four trace elements in neonates and pediatric patients are:

MANGANESE: For pediatric patients, a dosage of 2 to 10 mcg manganese/kg/day is suggested.

Periodic monitoring of plasma levels of Zinc, Copper, Manganese and Chromium is suggested as a guideline preparation.

Do not directly mix ascorbic acid injection with copper or selenium containing parenteral products in the same syringe or vial, as this admixture may cause the formation of an insoluble precipitate.

Parenteral drug products should be visually inspected for particulate matter and discoloration prior to administration, whenever solution and container permit.

FOR IV USE AFTER DILUTION - PRESERVATIVE FREE 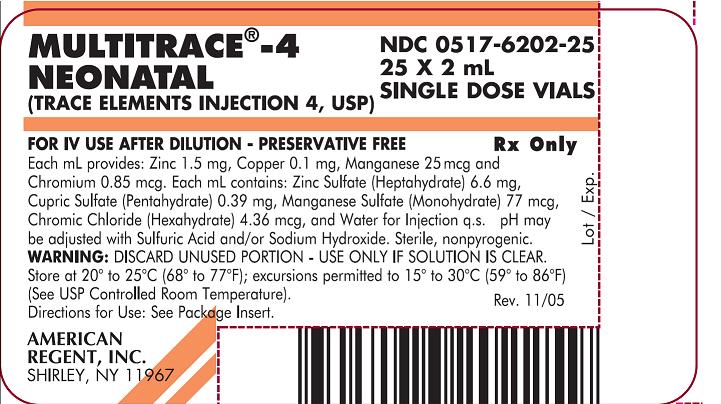 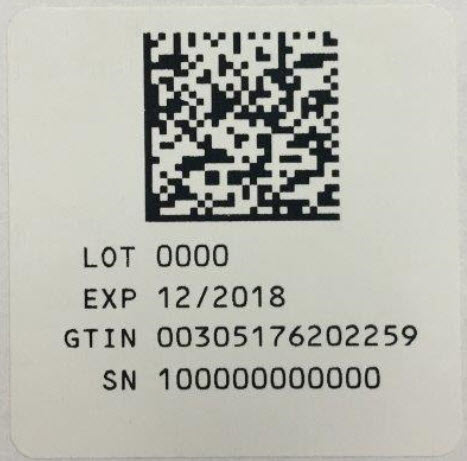