In vitro studies and in vivo pharmacologic studies have demonstrated that metaproterenol sulfate has a preferential effect on beta2 adrenergic receptors compared with isoproterenol. While it is recognized that beta2 adrenergic receptors are the predominant receptors in bronchial smooth muscle, recent data indicate that there is a population of beta2 receptors in the human heart existing in a concentration between 10 to 50%. The precise function of these, however, is not yet established (see WARNINGS section).

The pharmacologic effects of beta adrenergic agonist drugs, including metaproterenol, are at least in part attributable to stimulation through beta adrenergic receptors of intracellular adenyl cyclase, the enzyme which catalyzes the conversion of adenosine triphosphate (ATP) to cyclic-3’, 5’ -adenosine monophosphate (c-AMP). Increased c-AMP levels are associated with relaxation of bronchial smooth muscle and inhibition of release of mediators of immediate hypersensitivity from cells, especially from mast cells.

PHARMACOKINETICS: Absorption, biotransformation and excretion studies in humans following oral administration have indicated that an average of less than 10% of the drug is absorbed intact; it is not metabolized by catechol-0-methyltransferase nor converted to glucuronide conjugates but is excreted primarily as the sulfate conjugate formed in the gut.

Pulmonary function has been monitored in controlled single- and multiple-dose studies. The duration of effect of a single dose of metaproterenol sulfate syrup (that is, the period of time during which there is a 15% or greater increase in mean FEV1) was up to 4 hours. Recent studies in laboratory animals (minipigs, rodents and dogs) recorded the occurrence of cardiac arrhythmias and sudden death (with histologic evidence of myocardial necrosis) when beta agonists and methylxanthines were administered concurrently. The significance of these findings when applied to humans is currently unknown.

Metaproterenol sulfate syrup is indicated as a bronchodilator for bronchial asthma and for reversible bronchospasm which may occur in association with bronchitis and emphysema.

Use in patients with cardiac arrhythmias associated with tachycardia is contraindicated.

Although rare, immediate hypersensitivity reactions can occur. Therefore, metaproterenol sulfate syrup is contraindicated in patients with a history of hypersensitivity to any of its components.

Metaproterenol, like other beta adrenergic agonists, can produce a significant cardiovascular effect in some patients, as measured by pulse rate, blood pressure, symptoms, and/or ECG changes.

General: Extreme care must be exercised with respect to the administration of additional sympathomimetic agents.

Since metaproterenol is a sympathomimetic amine, it should be used with caution in patients with cardiovascular disorders, including ischemic heart disease, hypertension or cardiac arrhythmias, in patients with hyperthyroidism or diabetes mellitus, and in patients who are unusually responsive to sympathomimetic amines or who have convulsive disorders. Significant changes in systolic and diastolic blood pressure could be expected to occur in some patients after use of any beta adrenergic bronchodilator.

Drug Interactions: Other beta adrenergic bronchodilators should not be used concomitantly with metaproterenol because they may have additive effects. Beta adrenergic agonist should be administered with caution to patients being treated with monoamine oxidase inhibitors or tricyclic antidepressants, since the action of beta adrenergic agonists on the vascular system may be potentiated.

Pregnancy: Teratogenic Effects: PREGNANCY CATEGORY C: Metaproterenol sulfate has been shown to be teratogenic and embryotoxic in rabbits when given in doses corresponding to 62 times the maximum recommended dose. These effects included skeletal abnormalities, hydrocephalus and skull bone separation. Results of other studies in rabbits, rats or mice have not revealed any teratogenic, embryotoxic or fetotoxic effects. There are no adequate and well-controlled studies in pregnant women. Metaproterenol sulfate should be used during pregnancy only if the potential benefit justifies the potential risk to the fetus.

Nursing Mothers: It is not known whether metaproterenol is excreted in human milk; therefore, metaproterenol should be used during nursing only if the potential benefit justifies the possible risk to the newborn.

Pediatric Use: Safety and effectiveness in children below the age of 6 have been demonstrated in a limited number of patients. See DOSAGE AND ADMINISTRATION section.

Adverse reactions are similar to those noted with other sympathomimetic agents.

The expected symptoms with overdosage are those of excessive beta stimulation and/or any of the symptoms listed under ADVERSE REACTIONS, e.g., angina, hypertension or hypotension. arrhythmias, nervousness, headache, tremor, dry mouth, palpitation, nausea, dizziness, fatigue, malaise and insomnia.

The treatment consists of discontinuation of metaproterenol together with appropriate symptomatic therapy.

Children: Aged six to nine years or weight under 60 lb - one teaspoonful (5 mL) three or four times a day. Children over nine years or weight over 60 lb - two teaspoonfuls (10 mL) three or four times a day. Clinical trial experience in children under the age of six is limited. Of 40 children treated with metaproterenol sulfate syrup for at least one month, daily doses of approximately 1.3 to 2.6 mg/kg were well tolerated.

It is recommended that the physician titrate the dosage according to each individual patient’s response to therapy. 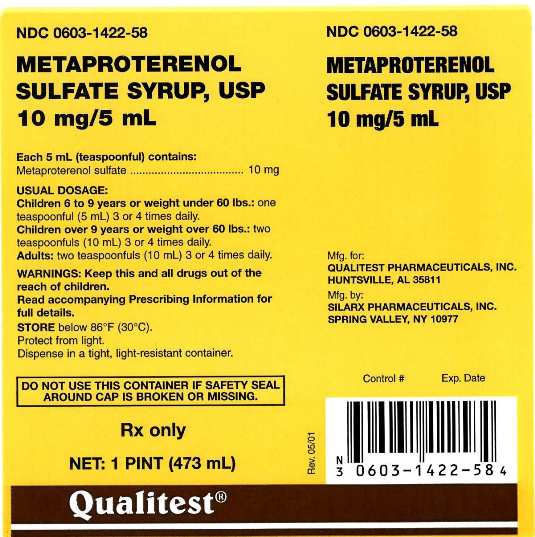