An exaggerated use washing test on the sensitive antecubital skin of 10 subjects twice daily for five consecutive days showed that the irritancy potential of ketoconazole 2% shampoo was significantly less than that of 2.5% selenium sulfide shampoo.

Mode of Action: Interpretations of in vivo studies suggest that ketoconazole impairs the synthesis of ergosterol, which is a vital component of fungal cell membranes. It is postulated, but not proven, that the therapeutic effect of ketoconazole in tinea (pityriasis) versicolor is due to the reduction of Pityrosporum orbiculare (Malassezia furfur) and that the therapeutic effect in dandruff is due to the reduction of Pityrosporum ovale. Support for the therapeutic effect in tinea versicolor comes from a three-arm, parallel, double-blind, placebo-controlled study in patients who had moderately severe tinea (pityriasis) versicolor. Successful response rates in the primary efficacy population for each of both three-day and single-day regimens of ketoconazole 2% shampoo were statistically significantly greater (73% and 69%, respectively) than a placebo regimen (5%). There had been mycological confirmation of fungal disease in all cases at baseline. Mycological clearing rates were 84% and 78%, respectively, for the three-day and one-day regimens of the 2% shampoo and 11% in the placebo regimen. While the differences in the rates of successful response between either of the two active treatments and placebo were statistically significant, the difference between the two active regimens was not.

Ketoconazole 2% shampoo is indicated for the treatment of tinea (pityriasis) versicolor caused by or presumed to be caused by Pityrosporum orbiculare (also known as Malassezia furfur or M. orbiculare).

Ketoconazole 2% shampoo is contraindicated in persons who have known hypersensitivity to the active ingredient or excipients of this formulation.

Severe hypersensitivity reactions, including anaphylaxis, have been reported during post-marketing use of ketoconazole shampoo. If a reaction suggesting sensitivity or chemical irritation should occur, use of the medication should be discontinued.

Long-term studies to assess the carcinogenic potential of ketoconazole 2% shampoo have not been conducted. A long-term feeding study of ketoconazole in Swiss Albino mice and in Wistar rats showed no evidence of oncogenic activity. The dominant lethal mutation test in male and female mice revealed that single oral doses of ketoconazole as high as 80 mg/kg were not genotoxic. The Ames Salmonella microsomal activator assay was also negative.

There are no adequate and well-controlled studies in pregnant women. Ketoconazole should be used during pregnancy only if the potential benefit justifies the potential risk to the fetus. In humans, ketoconazole is not detected in plasma after chronic shampooing on the scalp.

Nursing mothers: There are no adequate and well-controlled studies in nursing women. Ketoconazole is not detected in plasma after chronic shampooing on the scalp. Caution should be exercised when ketoconazole 2% shampoo is administered to a nursing woman.

Pediatric Use: Safety and effectiveness in children have not been established.

In 11 double-blind trials in 264 patients using ketoconazole 2% shampoo for the treatment of dandruff or seborrheic dermatitis, an increase in normal hair loss and irritation occurred in less than 1% of patients. In three open-label safety trials in which 41 patients shampooed 4–10 times weekly for six months, the following adverse experiences each occurred once: abnormal hair texture, scalp pustules, mild dryness of the skin, and itching. As with other shampoos, oiliness and dryness of hair and scalp have been reported. In a double-blind, placebo-controlled trial in which patients with tinea versicolor were treated with either a single application of ketoconazole 2% shampoo (n=106), a daily application for three consecutive days (n=107), or placebo (n=105), drug-related adverse events occurred in 5 (5%), 7 (7%) and 4 (4%) of patients, respectively. The only events that occurred in more than one patient in any one of the three treatment groups were pruritus, application site reaction, and dry skin; none of these events occurred in more than 3% of the patients in any one of the three groups.

Because these reactions are reported voluntarily from a population of uncertain size, it is not possible to reliably estimate their frequency. The following adverse drug reactions have been identified during post-marketing experience with ketoconazole 2% shampoo: there have been reports of hair discoloration and abnormal hair texture, itching, skin burning sensation, contact dermatitis, hypersensitivity, angioedema, alopecia, rash, urticaria, skin irritation, dry skin, and application site reactions.

Ketoconazole 2% shampoo is intended for external use only. In the event of accidental ingestion, supportive and symptomatic measures should be employed. Induced emesis and gastric lavage should not be performed to avoid aspiration.

Storage conditions: Store at a temperature not above 25°C (77°F). Protect from light.

Keep out of reach of children 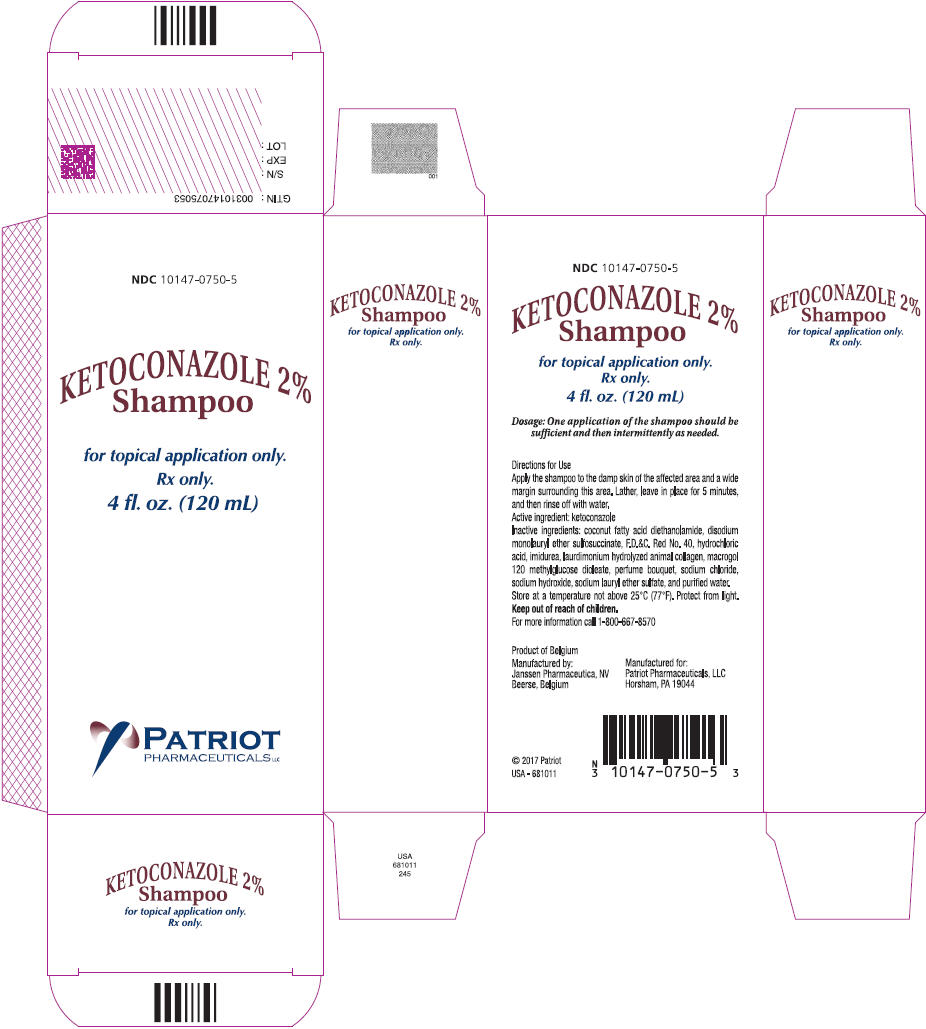