Eurax® (crotamiton, USP)
Lotion/Cream (10% w/w)
FOR TOPICAL USE ONLY
NOT FOR OPHTHALMIC, ORAL, OR INTRAVAGINAL USE
Rx only

Crotamiton is N-ethyl-N-(o-methylphenyl)-2-butenamide and its structural formula is: 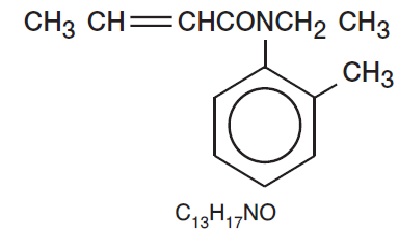 Crotamiton, USP is a colorless to slightly yellowish oil, having a faint amine-like odor. It is miscible with alcohol and with methanol. Crotamiton is a mixture of the cis and trans isomers. Its molecular weight is 203.28.

Eurax has scabicidal and antipruritic actions. The mechanisms of these actions are not known. The pharmacokinetics of crotamiton and its degree of systemic absorption following topical application have not been determined.

For eradication of scabies (Sarcoptes scabiei) and for symptomatic treatment of pruritic skin.

Eurax should not be applied topically to patients who develop a sensitivity or are allergic to it or who manifest a primary irritation response to topical medications.

If severe irritation or sensitization develops, treatment with this product should be discontinued and appropriate therapy instituted.

See DIRECTIONS FOR PATIENTS WITH SCABIES

Long-term carcinogenicity studies in animals have not been conducted.

Clinical studies with Eurax (crotamiton, USP) Lotion/Cream did not include sufficient numbers of subjects aged 65 years and older to determine whether they respond differently than younger subjects. Other reported clinical experience has not identified differences in responses between elderly and younger patients, but greater sensitivity of some older individuals cannot be ruled out.

Primary irritation reactions, such as dermatitis, pruritus, and rash, and allergic sensitivity reactions have been reported in a few patients.

There is no specific information on the effect of overtreatment with repeated topical applications in humans. A death was reported but cause was not confirmed.

Accidental oral ingestion may be accompanied by burning sensation in the mouth, irritation of the buccal, esophageal and gastric mucosa, nausea, vomiting, abdominal pain.

In Scabies: Thoroughly massage into the skin of the whole body from the chin down, paying particular attention to all folds and creases. A second application is advisable 24 hours later. Clothing and bed linen should be changed the next morning. A cleansing bath should be taken 48 hours after the last application.

In Pruritus: Massage gently into affected areas until medication is completely absorbed. Repeat as needed.

DIRECTIONS FOR PATIENTS WITH SCABIES:

•
Take a routine bath or shower. Thoroughly massage Eurax cream or lotion into the skin from the chin to the toes including folds and creases.
•
Put Eurax cream or lotion under fingernails after trimming the fingernails short, because scabies are very likely to remain there. A toothbrush can be used to apply the Eurax cream or lotion under the fingernails. Immediately after use, the toothbrush should be wrapped in paper and thrown away. Use of the same brush in the mouth could lead to poisoning.
•
A second application is advisable 24 hours later.
•
A 60 gram tube or bottle is sufficient for two applications.
•
Clothing and bed linen should be changed the next day. Contaminated clothing and bed linen may be dry-cleaned, or washed in the hot cycle of the washing machine.
•
A cleansing bath should be taken 48 hours after the last application

Eurax® (crotamiton, USP) Cream, 10% is a white to yellowish-white soft cream with a perfumed characteristic odor and supplied as:

Eurax® (crotamiton, USP) Lotion, 10% is a white to yellowish-white lotion having a characteristic perfumed odor and supplied as: 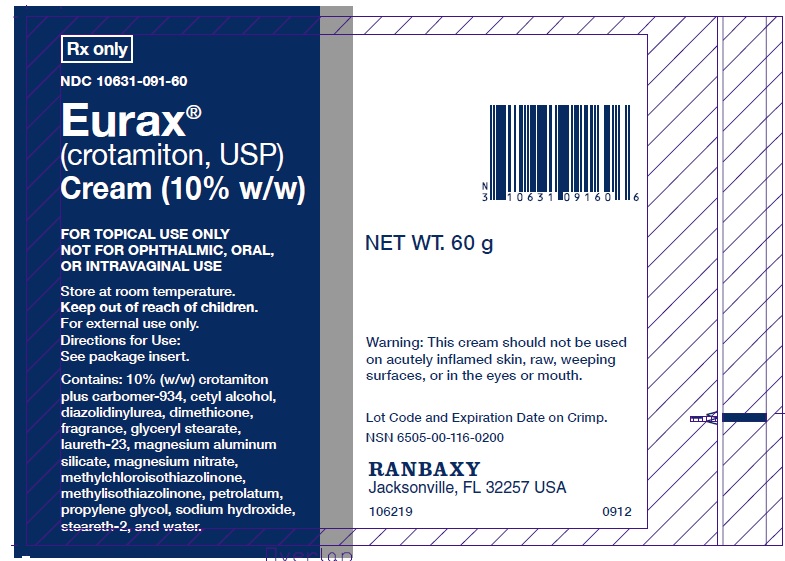 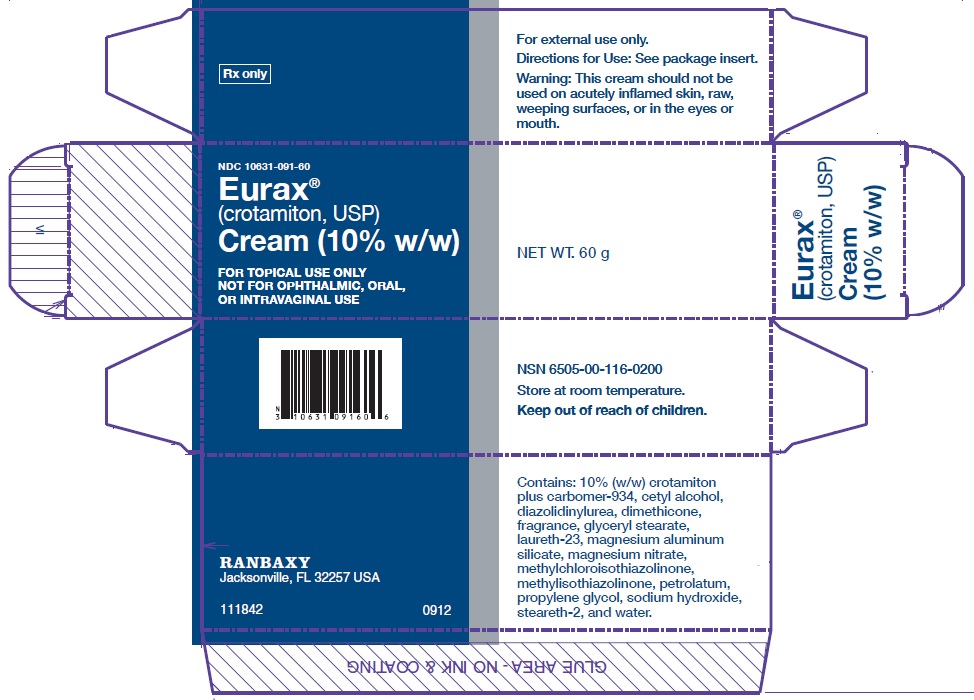 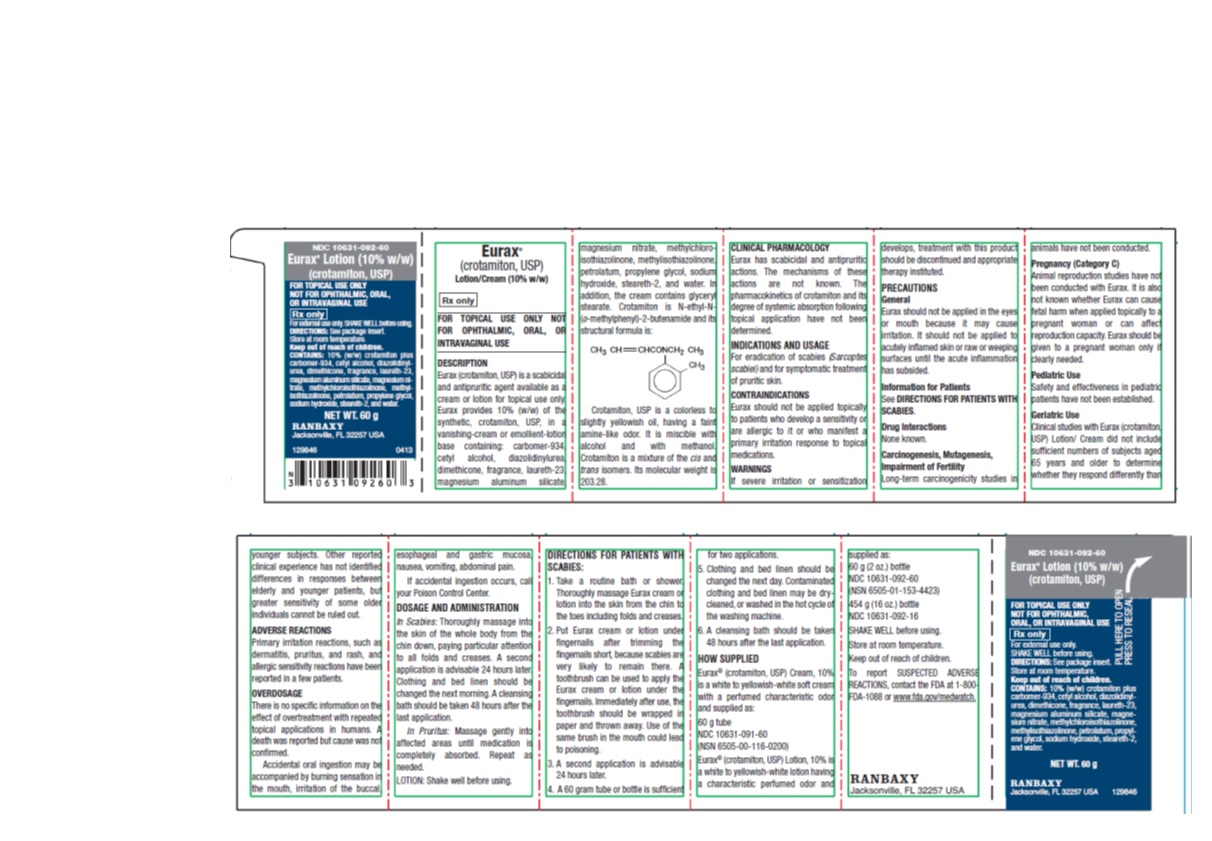