XEPI™ is indicated for the topical treatment of impetigo due to Staphylococcus aureus or Streptococcus pyogenes in adult and pediatric patients 2 months of age and older [see Clinical Studies (14)].

The prolonged use of XEPI may result in overgrowth of nonsusceptible bacteria and fungi. If such infections occur during therapy, discontinue use and institute appropriate supportive measures.

There are no available data on the use of XEPI in pregnant women to inform a drug associated risk. Systemic absorption of XEPI in humans is negligible following topical administration of XEPI (up to twice the concentration of the marketed formulation) [see Clinical Pharmacology (12.3)]. Due to the negligible systemic exposure, it is not expected that maternal use of XEPI will result in fetal exposure to the drug.

Animal reproduction studies were not conducted with XEPI. However, toxicity studies conducted in pregnant rats and rabbits administered the oral form of ozenoxacin showed no significant adverse developmental effects (at >10,000 times the maximum human plasma concentration seen with dermal application of ozenoxacin).

No data are available regarding the presence of ozenoxacin in human milk, and the effects of ozenoxacin on the breastfed infant or on milk production. However, breastfeeding is not expected to result in exposure of the child to ozenoxacin due to the negligible systemic absorption of ozenoxacin in humans following topical administration of XEPI. The developmental and health benefits of breastfeeding should be considered along with the mother's clinical need for XEPI and any potential adverse effects on the breast-fed child from XEPI or from the underlying maternal condition.

The safety profile of XEPI in pediatric patients 2 months and older was similar to that of adults [see Adverse Reactions (6.1)].

The safety and effectiveness of XEPI in pediatric patients younger than 2 months of age have not been established [see Clinical Studies (14)].

Clinical studies of XEPI did not include sufficient numbers of subjects aged 65 and older to determine whether they respond differently from younger subjects. Other reported clinical experience has not identified differences in responses between the elderly and younger patients.

Any sign or symptom of overdose, either topically or by accidental ingestion, should be treated symptomatically. No specific antidote is known.

XEPI contains ozenoxacin, a quinolone antimicrobial. It is intended for topical use only.

The chemical name of ozenoxacin is 1-Cyclopropyl-8-methyl-7-(5-methyl-6-methylamino-pyridin-3-yl)-4-oxo-1,4-dihydro-quinoline-3-carboxylic acid. Ozenoxacin, a white to pale-yellow crystalline solid, has a molecular formula of C21H21N3O3, and a molecular weight of 363.41. The chemical structure is:

Four pharmacokinetic studies were conducted in 110 patients utilizing varying strengths of ozenoxacin cream, up to 2% (twice the concentration of the marketed formulation). Three of these studies assessed systemic absorption in healthy subjects and in subjects with impetigo. These studies were conducted with either single or repeated application of up to 1 g ozenoxacin cream to intact or abraded skin (up to 200 cm2 surface area). No systemic absorption was observed in 84 of 86 subjects, and negligible systemic absorption was observed at the level of detection (0.489 ng/mL) in 2 subjects.

Plasma protein binding of [14C]-ozenoxacin was moderate (~80 to 85%) and did not appear to be dependent on concentration. Since negligible systemic absorption was observed in clinical studies, tissue distribution has not been investigated in humans.

Excretion: Studies have not been investigated in humans due to the negligible systemic absorption observed in clinical studies.

Ozenoxacin is a quinolone antimicrobial drug. The mechanism of action involves the inhibition of bacterial DNA replication enzymes, DNA gyrase A and topoisomerase IV. Ozenoxacin has been shown to be bactericidal against S. aureus and S. pyogenes organisms.

The mechanism of quinolone resistance can arise through mutations of one or more of the genes that encode DNA gyrase or topoisomerase IV. Resistant organisms will typically carry a combination of mutations within gyrA and parC subunits.

Overall the frequency of resistant mutants selected by ozenoxacin is ≤10-10.

Interaction with Other Antimicrobials

Ozenoxacin has been tested in combination with 17 other commonly used antimicrobial agents against S. aureus and S.pyogenes. Antagonism interactions with ozenoxacin were observed with ciprofloxacin against S. aureus.

Ozenoxacin has been shown to be active against most isolates of the following microorganisms, both in vitro and in clinical infections [see Indications and Usage (1)]:

Long-term studies in animals to evaluate carcinogenic potential have not been conducted with ozenoxacin.

Oral doses of ozenoxacin did not affect mating and fertility in male and female rats treated up to 500 mg/kg/day (about 8500 and 16,000 times respectively, the maximum human plasma concentration seen with dermal application of ozenoxacin 1% cream).

The safety and efficacy of XEPI for the treatment of impetigo was evaluated in two multi-center, randomized, double-blind placebo controlled clinical trials (Trial 1, (NCT01397461) and Trial 2, (NCT02090764)). Seven-hundred twenty-three (723) subjects two months of age and older with an affected body surface area of up to 100 cm2, and not exceeding 2% for subjects aged 2 months to 11 years were randomized to XEPI or placebo. Subjects applied XEPI or placebo twice daily for 5 days. Subjects with underlying skin disease (e.g., preexisting eczematous dermatitis), skin trauma, clinical evidence of secondary infection, or systemic signs and symptoms of infection (such as fever), were excluded from these studies.

Overall clinical success was defined as no need for additional antimicrobial therapy of the baseline affected area(s) and absence/reduction in clinical signs and symptoms assessed at the end of therapy (Day 6-7), as follows: absence of exudates/pus, crusting, tissue warmth, and pain; and erythema/inflammation, tissue edema, and itching assessed as less than mild in Trial 1; and absence of blistering, exudates/pus, crusting, and itching/pain, and mild or improved erythema/inflammation in Trial 2. Table 2 below presents the results for clinical response at the end of therapy.

The most commonly identified bacteria were S. aureus and S. pyogenes. Table 3 below presents the results for clinical success at end of therapy in subjects with S.aureus or S.pyogenes at baseline.

Advise patients (and/or their caregivers or guardians) using XEPI of the following information and instructions:

For Topical Use Only
Not for Ophthalmic, Oral, Intranasal,
or Intravaginal Use 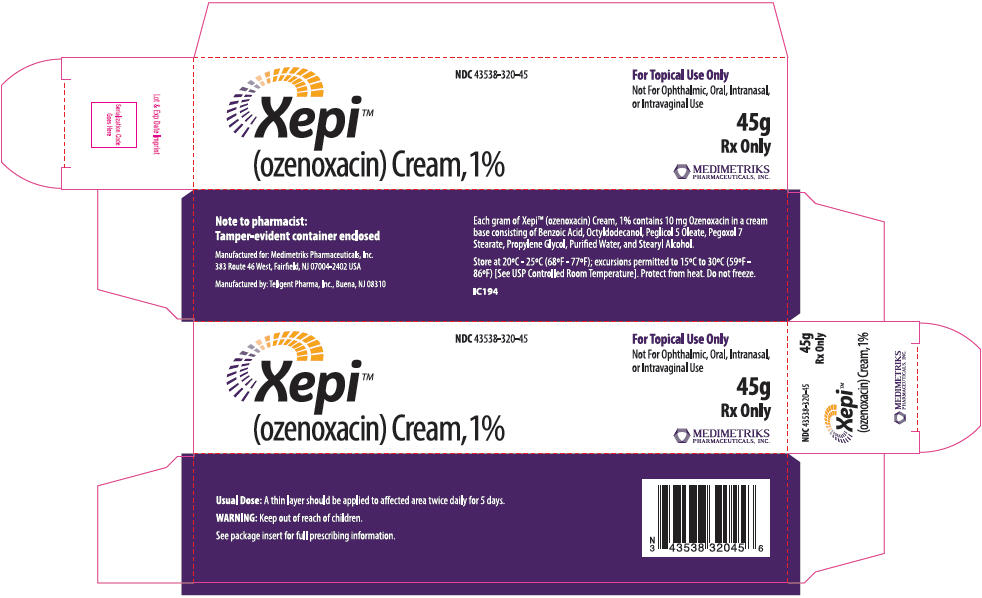