Phendimetrazine tartrate, as the dextro isomer, has the chemical name of (2S,3S)-3,4-dimethyl-2-phenylmorpholine L-(+)-tartrate (1:1). 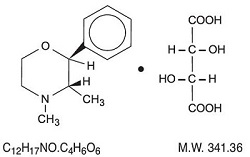 It is freely soluble in water; sparingly soluble in warm alcohol, insoluble in chloroform, acetone, ether and benzene. Each capsule, for oral administration, contains 105 mg phendimetrazine tartrate manufactured in a special base designed for prolonged release.

Drugs of this class used in obesity are commonly known as “anorectics” or “anorexigenics”. It has not been established, however, that the action of such drugs in treating obesity is primarily one of appetite suppression. Other central nervous system actions or metabolic effects, may be involved, for example. Adult obese subjects instructed in dietary management and treated with anorectic drugs, lose more weight on the average than those treated with placebo and diet, as determined in relatively short term clinical trials.

The magnitude of increased weight loss of drug-treated patients over placebo-treated patients is only a fraction of a pound a week. The rate of weight loss is greatest in the first weeks of therapy for both drug and placebo subjects and tends to decrease in succeeding weeks. The possible origins of the increased weight loss due to the various drug effects are not established. The amount of weight loss associated with the use of an anorectic drug varies from trial to trial, and the increased weight loss appears to be related in part to variables other than the drug prescribed, such as the physician investigator, the population treated, and the diet prescribed. Studies do not permit conclusions as to the relative importance of the drug and non-drug factors on weight loss.

The active drug, 105 mg of phendimetrazine tartrate in each capsule of this special extended-release dosage form approximates the action of three 35 mg immediate release doses taken at four hour intervals.

The major route of elimination is via the kidneys where most of the drug and metabolites are excreted. Some of the drug is metabolized to phenmetrazine and also phendimetrazine-N-oxide.

The average half-life of elimination when studied under controlled conditions is about 3.7 hours for both the extended-release and immediate release forms. The absorption half-life of the drug from the immediate release 35 mg phendimetrazine tablets is appreciably more rapid than the absorption rate of the drug from the extended-release formulation.

Phendimetrazine tartrate extended-release capsules are indicated in the management of exogenous obesity as a short term adjunct (a few weeks) in a regimen of weight reduction based on caloric restriction in patients with an initial body mass index (BMI) of greater than or equal to 30 kg/m 2 or greater than or equal to 27 kg/m 2 in the presence of other risk factors (e.g., controlled hypertension, diabetes, hyperlipidemia) who have not responded to appropriate weight reducing regimen (diet and/or exercise) alone.

Below is a chart of Body Mass Index (BMI) based on various heights and weights. BMI is calculated by taking the patient’s weight, in kilograms (kg), divided by the patient’s height, in meters (m), squared. Metric conversions are as follows: pounds ÷ 2.2 = kg; inches × 0.0254 = meters 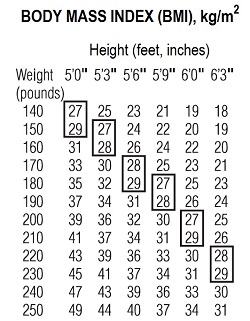 The usefulness of agents of this class (see CLINICAL PHARMACOLOGY) should be measured against possible risk factors inherent in their use such as those described below. Phendimetrazine tartrate is indicated for use as monotherapy only.

Valvular heart disease associated with the use of some anorectic agents such as fenfluramine and dexfenfluramine has been reported. Possible contributing factors include use for extended periods of time, higher than recommended dose, and/or use in combination with other anorectic drugs.

The potential risk of possible serious adverse effects such as valvular heart disease and pulmonary hypertension should be assessed carefully against the potential benefit of weight loss. Baseline cardiac evaluation should be considered to detect preexisting valvular heart diseases or pulmonary hypertension prior to initiation of phendimetrazine treatment. Phendimetrazine tartrate is not recommended in patients with known heart murmur or valvular heart disease. Echocardiogram during and after treatment could be useful for detecting any valvular disorders which may occur. Tolerance to the anorectic effect of phendimetrazine develops within a few weeks. When this occurs, its use should be discontinued; the maximum recommended dose should not be exceeded. Use of phendimetrazine tartrate within 14 days following the administration of monoamine oxidase inhibitors may result in a hypertensive crisis. Abrupt cessation of administration following prolonged high dosage results in extreme fatigue and depression. Because of the effect on the central nervous system, phendimetrazine may impair the ability of the patient to engage in potentially hazardous activities such as operating machinery or driving a motor vehicle; the patient should therefore be cautioned accordingly.

Insulin or oral hypoglycemic medication requirements in diabetes mellitus may be altered in association with the use of phendimetrazine and the concomitant dietary regimen.

Studies with phendimetrazine tartrate sustained release have not been performed to evaluate carcinogenic potential, mutagenic potential or effects on fertility.

Phendimetrazine tartrate is contraindicated during pregnancy because weight loss offers no potential benefit to a pregnant woman and may result in fetal harm. A minimum weight gain, and no weight loss, is currently recommended for all pregnant women, including those who are already overweight or obese, due to obligatory weight gain that occurs in maternal tissues during pregnancy. Phendimetrazine tartrate, a phenylalkylamine sympathomimetic amine has pharmacological activity similar to amphetamines (see CLINICAL PHARMACOLOGY). Animal reproduction studies have not been conducted in phendimetrazine tartrate. If this drug is used during pregnancy, or if the patient becomes pregnant while taking this drug, the patient should be apprised of the potential hazard to a fetus.

It is not known if phendimetrazine tartrate is excreted in human milk. Phendimetrazine tartrate, a phenylalkylamine sympathomimetic amine, has pharmacological activity similar to the amphetamines (see CLINICAL PHARMACOLOGY), and other amphetamines are present in human milk. Because of the potential for serious adverse reactions in nursing infants, a decision should be made whether to discontinue nursing or to discontinue the drug, taking into account the importance of the drug to the mother.

Use of phendimetrazine tartrate is contraindicated during or within 14 days following the administration of monoamine oxidase inhibitors because of the risk of hypertensive crisis.

Concomitant use of alcohol with phendimetrazine tartrate may result in an adverse drug reaction.

Requirements may be altered.

Safety and effectiveness in pediatric patients have not been established. Because pediatric obesity is a chronic condition requiring long-term treatment, the use of phendimetrazine tartrate ER approved for short-term therapy, is not recommended in patients less than 17 years of age.

The major route of elimination is via the kidney where most of the drug and metabolites are excreted. The risk of toxic reactions to this drug may be greater in patients with impaired renal function. Because elderly patients are more likely to have decreased renal function, care should be taken in dose selection, and it may be useful to monitor renal function.

The following adverse reactions to phendimetrazine have been identified:

Phendimetrazine tartrate is related chemically and pharmacologically to the amphetamines. Amphetamines and related stimulant drugs have been extensively abused, and the possibility of abuse of phendimetrazine should be kept in mind when evaluating the desirability of including a drug as part of a weight reduction program.

Abuse of amphetamines and related drugs may be associated with intense psychological dependence and severe social dysfunction. There are reports of patients who have increased the dosage to many times that recommended. Abrupt cessation following prolonged high dosage administration results in extreme fatigue and mental depression; changes are also noted on the sleep EEG. Manifestations of chronic intoxication with anorectic drugs include severe dermatoses, marked insomnia, irritability, hyperactivity and personality changes. The most severe manifestation of chronic intoxications is psychosis, often clinically indistinguishable from schizophrenia.

The management of acute overdosage is largely symptomatic. It includes lavage and sedation with a barbiturate. If hypertension is marked, the use of a nitrate or rapid-acting alpha receptor-blocking agent should be considered. Experience with hemodialysis or peritoneal dialysis is inadequate to permit recommendations for its use.

DISPENSE IN A TIGHT CONTAINER AS DEFINED IN THE USP. 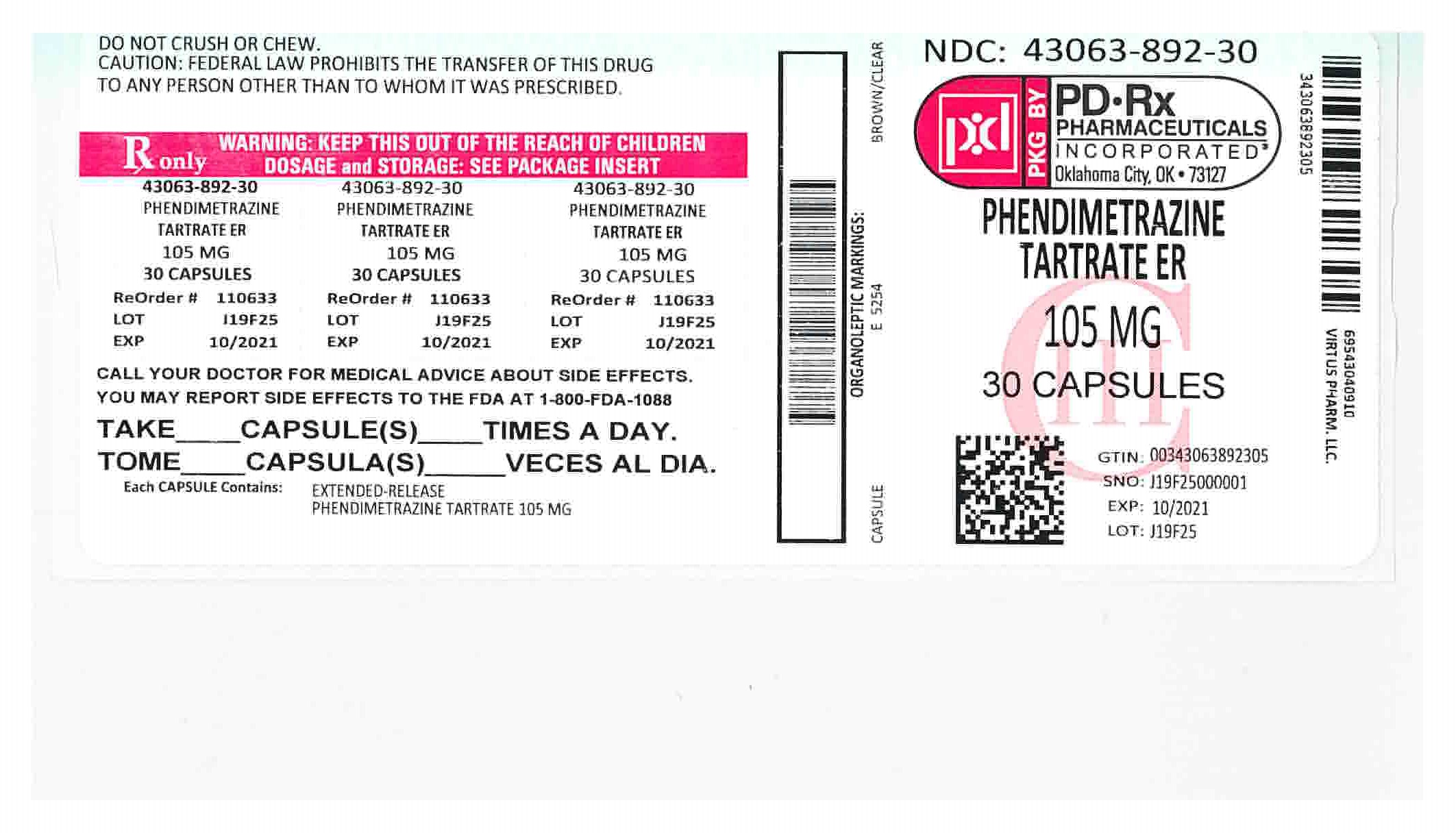