Phenoxybenzamine hydrochloride is a colorless, crystalline powder with a molecular weight of 340.3, which melts between 136°and 141°C. It is soluble in water, alcohol and chloroform; insoluble in ether.

Dibenzyline (phenoxybenzamine hydrochloride) is a long-acting, adrenergic, alpha-receptor-blocking agent, which can produce and maintain "chemical sympathectomy" by oral administration. It increases blood flow to the skin, mucosa and abdominal viscera, and lowers both supine and erect blood pressures. It has no effect on the parasympathetic system.

Twenty to 30 percent of orally administered phenoxybenzamine appears to be absorbed in the active form.¹

Dibenzyline is indicated in the treatment of pheochromocytoma, to control episodes of hypertension and sweating. If tachycardia is excessive, it may be necessary to use a beta-blocking agent concomitantly.

Conditions where a fall in blood pressure may be undesirable; hypersensitivity to the drug or any of its components.

Dibenzyline (phenoxybenzamine hydrochloride) may interact with compounds that stimulate both alpha- and beta-adrenergic receptors (i.e., epinephrine) to produce an exaggerated hypotensive response and tachycardia.(See WARNING.)

Case reports of carcinoma in humans after long-term treatment with phenoxybenzamine have been reported. Hence long-term use of phenoxybenzamine is not recommended.³,⁴ Carefully weigh the benefits and risks before prescribing this drug.

Phenoxybenzamine hydrochloride showed in vitro mutagenic activity in the Ames test and mouse lymphoma assay; it did not show mutagenic activity in vivo in the micronucleus test in mice. In rats and mice, repeated intraperitoneal administration of phenoxybenzamine hydrochloride (three times per week for up to 52 weeks) resulted in peritoneal sarcomas. Chronic oral dosing in rats (for up to 2 years) produced malignant tumors of the small intestine and non-glandular stomach, as well as ulcerative and/or erosive gastritis of the glandular stomach. Whereas squamous cell carcinomas of the non-glandular stomach were observed at all tested doses of phenoxybenzamine hydrochloride, there was a no-observed-effect-level of 10 mg/kg for tumors (carcinomas and sarcomas) of the small intestine. This dose is, on a body surface area basis, about twice the maximum recommended human dosage of 20 mg b.i.d.

It is not known whether this drug is excreted in human milk. Because many drugs are excreted in human milk, and because of the potential for serious adverse reactions from phenoxybenzamine hydrochloride, a decision should be made whether to discontinue nursing or to discontinue the drug, taking into account the importance of the drug to the mother.

The following adverse reactions have been observed, but there are insufficient data to support an estimate of their frequency.

*These so-called "side effects" are actually evidence of adrenergic blockade and vary according to the degree of blockade.

SYMPTOMS-These are largely the result of blocking of the sympathetic nervous system and of the circulating epinephrine. They may include postural hypotension, resulting in dizziness or fainting; tachycardia, particularly postural; vomiting; lethargy; shock.

When symptoms and signs of overdosage exist, discontinue the drug. Treatment of circulatory failure, if present, is a prime consideration. In cases of mild overdosage, recumbent position with legs elevated usually restores cerebral circulation. In the more severe cases, the usual measures to combat shock should be instituted. Usual pressor agents are not effective. Epinephrine is contraindicated because it stimulates both alpha- and beta- receptors; since alpha- receptors are blocked, the net effect of epinephrine administration is vasodilation and a further drop in blood pressure (epinephrine reversal).

The patient may have to be kept flat for 24 hours or more in the case of overdose, as the effect of the drug is prolonged. Leg bandages and an abdominal binder may shorten the period of disability.

The dosage should be adjusted to fit the needs of each patient. Small initial doses should be slowly increased until the desired effect is obtained or the side effects from blockade become troublesome. After each increase, the patient should be observed on that level before instituting another increase. The dosage should be carried to a point where symptomatic relief and/or objective improvement are obtained, but not so high that the side effects from blockade become troublesome.

Initially, 10 mg of Dibenzyline (phenoxybenzamine hydrochloride) twice a day. Dosage should be increased every other day, usually to 20 to 40 mg 2 or 3 times a day, until an optimal dosage is obtained, as judged by blood pressure control. 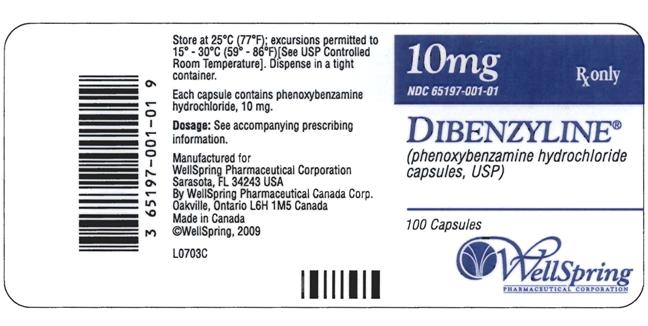