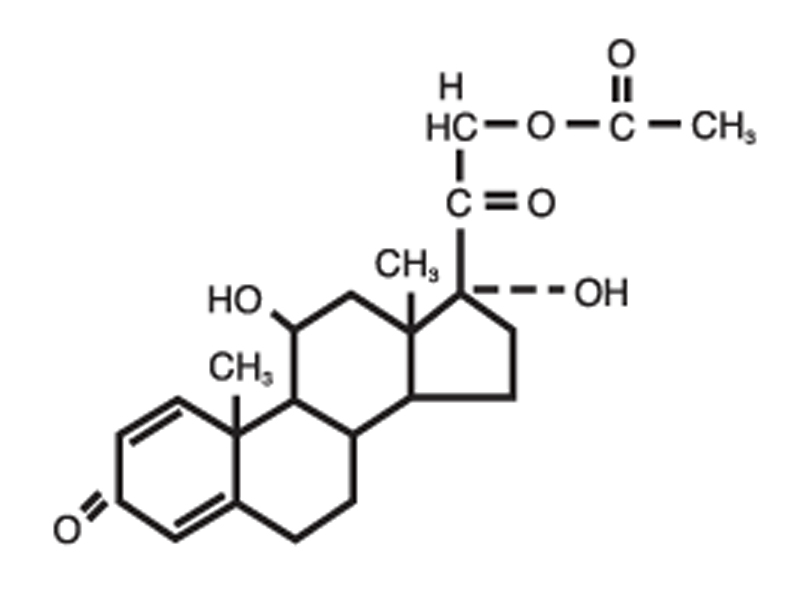 Corticosteroids inhibit the inflammatory response to a variety of inciting agents and probably delay or slow healing. They inhibit the edema, fibrin deposition, capillary dilation, leukocyte migration, capillary proliferation, fibroblast proliferation, deposition of collagen, and scar formation associated with inflammation. There is no generally accepted explanation for the mechanism of action of ocular corticosteroids. However, corticosteroids are thought to act by the induction of phospholipase A2 inhibitory proteins, collectively called lipocortins. It is postulated that these proteins control the biosynthesis of potent mediators of inflammation, such as prostaglandins and leukotrienes by inhibiting the release of their common precursor arachidonic acid. Arachidonic acid is released from membrane phospholipids by phospholipase A2.

Corticosteroids are capable of producing a rise in intraocular pressure.

Steroid responsive inflammatory conditions of the palpebral and bulbar conjunctiva, cornea, and anterior segment of the globe, such as allergic conjunctivitis, acne rosacea, superficial punctate keratitis, herpes zoster keratitis, iritis, cyclitis, selected infective conjunctivitides, when the inherent hazard of steroid use is accepted to obtain an advisable diminution in edema and inflammation; corneal injury from chemical, radiation, or thermal burns, or penetration of foreign bodies.

OMNIPRED® (prednisolone acetate ophthalmic suspension) is contraindicated in most viral diseases of the cornea and conjunctiva, including epithelial herpes simplex keratitis (dendritic keratitis), vaccinia, and varicella, and also in mycobacterial infection of the eye and fungal diseases of ocular structures. OMNIPRED® (prednisolone acetate ophthalmic suspension) is also contraindicated in individuals with known or suspected hypersensitivity to any of the ingredients of this preparation and to other corticosteroids.

FOR TOPICAL OPHTHALMIC USE. Prolonged use of corticosteroids may result in glaucoma with damage to the optic nerve, defects in visual acuity and fields of vision, and in posterior subcapsular cataract formation. Prolonged use may also suppress the host immune response and thus increase the hazard of secondary ocular infections. Various ocular diseases and long-term use of topical corticosteroids have been known to cause corneal and scleral thinning. Use of topical corticosteroids in the presence of thin corneal or scleral tissue may lead to perforation. Acute purulent infections of the eye may be masked or activity enhanced by the presence of corticosteroid medication. If this product is used for 10 days or longer, intraocular pressure (IOP) should be routinely monitored even though it may be difficult in children and uncooperative patients. Steroids should be used with caution in the presence of glaucoma. IOP should be checked frequently.

The use of steroids after cataract surgery may delay healing and increase the incidence of bleb formation.

Use of ocular steroids may prolong the course and may exacerbate the severity of many viral infections of the eye (including herpes simplex). Employment of a corticosteroid medication in the treatment of patients with a history of herpes simplex requires great caution; frequent slit lamp microscopy is recommended.

Corticosteroids are not effective in mustard gas keratitis and Sjogren's keratoconjunctivitis.

The initial prescription and renewal of the medication order should be made by a physician only after examination of the patient with the aid of magnification, such as slit lamp biomicroscopy and, where appropriate, fluorescein staining. If signs and symptoms fail to improve after two days, the patient should be reevaluated.

As fungal infections of the cornea are particularly prone to develop coincidentally with long-term local corticosteroid applications, fungal invasion should be suspected in any persistent corneal ulceration where a corticosteroid has been used or is in use. Fungal cultures should be taken when appropriate.

If this product is used for 10 days or longer, IOP should be monitored (see WARNINGS).

This product is sterile when packaged. To prevent contamination, care should be taken to avoid touching the bottle tip to eyelids or to any other surface. The use of this bottle by more than one person may spread infection. Keep bottle tightly closed when not in use. Keep out of the reach of children.

No studies have been conducted in animals or in humans to evaluate the potential of these effects.

Prednisolone has been shown to be teratogenic in mice when given in doses 1-10 times the human dose. Dexamethasone, hydrocortisone and prednisolone were ocularly applied to both eyes of pregnant mice five times per day on Days 10 through 13 of gestation. A significant increase in the incidence of cleft palate was observed in the fetuses of the treated mice. There are no adequate and well controlled studies in pregnant women. OMNIPRED® (prednisolone acetate ophthalmic suspension) should be used during pregnancy only if the potential benefit justifies the potential risk to the fetus.

It is not known whether topical administration of corticosteroids could result in sufficient systemic absorption to produce detectable quantities in human milk. Systemically administered corticosteroids appear in human milk and could suppress growth, interfere with endogenous corticosteroid production, or cause other untoward effects. Because of the potential for serious adverse reactions in nursing infants from prednisolone acetate, a decision should be made whether to discontinue nursing or to discontinue the drug, taking into account the importance of the drug to the mother.

Although systemic effects are extremely uncommon, there have been rare occurrences of systemic hypercorticoidism after use of topical steroids.

Corticosteroid-containing preparations have also been reported to cause acute anterior uveitis and perforation of the globe.

The development of secondary ocular infection (bacterial, fungal and viral) has occurred. Fungal and viral infections of the cornea are particularly prone to develop coincidentally with long-term applications of steroid. The possibility of fungal invasion should be considered in any persistent corneal ulceration where steroid treatment has been used (see WARNINGS).

The following additional adverse reactions have been reported with prednisolone use: Cushing’s syndrome and adrenal suppression may occur after very frequent use of ophthalmic prednisolone, particularly in very young children.

SHAKE WELL BEFORE USING. Two drops topically in the affected eye(s) four times daily. In cases of bacterial infections, concomitant use of anti-infective agents is mandatory. Care should be taken not to discontinue therapy prematurely. If signs and symptoms fail to improve after two days, the patient should be reevaluated (see PRECAUTIONS).

The dosing of OMNIPRED® suspension may be reduced, but care should be taken not to discontinue therapy prematurely.

In chronic conditions, withdrawal of treatment should be carried out by gradually decreasing the frequency of applications.

STORAGE: Store at 8°C to 24°C (46°F to 75°F) in an UPRIGHT position. After opening, OMNIPRED® can be used until the expiration date on the bottle. 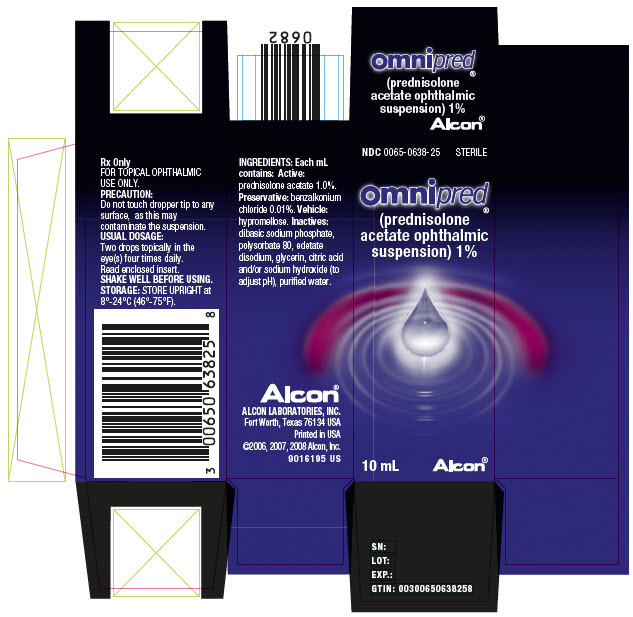