Terbutaline sulfate has not been approved and should not be used for prolonged tocolysis (beyond 48 - 72 hours). In particular, terbutaline sulfate should not be used for maintenance tocolysis in the outpatient or home setting. Serious adverse reactions, including death, have been reported after administration of terbutaline sulfate to pregnant women. In the mother, these adverse reactions include increased heart rate, transient hyperglycemia, hypokalemia, cardiac arrhythmias, pulmonary edema and myocardial ischemia. Increased fetal heart rate and neonatal hypoglycemia may occur as a result of maternal administration. [See Contraindications, Prolonged Tocolysis.]

Terbutaline sulfate USP, the active ingredient, is a beta-adrenergic agonist bronchodilator available as a sterile, nonpyrogenic, aqueous solution in ampules, for subcutaneous administration. Each milliliter of solution contains 1 mg of terbutaline sulfate USP (0.82 mg of the free base); sodium chloride USP, for isotonicity; hydrochloric acid NF, for adjustment to a target pH of 4; and water for injection.

Terbutaline sulfate USP is a white to gray-white crystalline powder. It is odorless or has a faint odor of acetic acid. It is soluble in water and in 0.1 N hydrochloric acid, slightly soluble in methanol, and insoluble in chloroform. Its molecular weight is 548.65.

The pharmacologic effects of beta-adrenergic agonists, including terbutaline, are at least in part attributable to stimulation through beta-adrenergic receptors of intracellular adenyl cyclase, the enzyme which catalyzes the conversion of adenosine triphosphate (ATP) to cyclic 3', 5'-adenosine monophosphate (cAMP). Increased cAMP levels are associated with relaxation of bronchial smooth muscle and inhibition of release of mediators of immediate hypersensitivity from cells, especially from mast cells.

Studies in laboratory animals (minipigs, rodents, and dogs) have demonstrated the occurrence of cardiac arrhythmias and sudden death (with histological evidence of myocardial necrosis) when beta-agonists and methylxanthines are administered concurrently. The clinical significance of these findings is unknown.

After subcutaneous administration of 0.25 mg of terbutaline sulfate to two male subjects, peak terbutaline serum concentrations of 5.2 and 5.3 ng/mL were observed at about 20 minutes after dosing.

Elimination half-life of the drug in 10 of 14 patients was approximately 2.9 hours after subcutaneous administration, but longer elimination half-lives (between 6-14 hours) were found in the other 4 patients. About 90% of the drug was excreted in the urine at 96 hours after subcutaneous administration, with about 60% of this being unchanged drug. It appears that the sulfate conjugate is a major metabolite of terbutaline and urinary excretion is the primary route of elimination.

Terbutaline Sulfate Injection, USP is indicated for the prevention and reversal of bronchospasm in patients 12 years of age and older with asthma and reversible bronchospasm associated with bronchitis and emphysema.

Terbutaline sulfate injection is contraindicated in patients known to be hypersensitive to sympathomimetic amines or any component of this drug product.

Asthma may deteriorate acutely over a period of hours or chronically over several days or longer. If the patient needs more doses of terbutaline sulfate than usual, this may be a marker of destabilization of asthma and requires re-evaluation of the patient and treatment regimen, giving special consideration to the possible need for anti-inflammatory treatment, e.g., corticosteroids.

Terbutaline sulfate like all other beta-adrenergic agonists, can produce a clinically significant cardiovascular effect in some patients as measured by pulse rate, blood pressure, and/or symptoms. Although such effects are uncommon after administration of terbutaline sulfate at recommended doses, if they occur, the drug may need to be discontinued. In addition, beta-agonists have been reported to produce electrocardiogram (ECG) changes, such as flattening of the T wave, prolongation of the QTc interval and ST segment depression. The clinical significance of these findings is unknown. Therefore, terbutaline sulfate, like all sympathomimetic amines, should be used with caution in patients with cardiovascular disorders, especially coronary insufficiency, cardiac arrhythmias, and hypertension.

There have been rare reports of seizures in patients receiving terbutaline; seizures did not recur in these patients after the drug was discontinued.

Terbutaline, as with all sympathomimetic amines, should be used with caution in patients with cardiovascular disorders, including ischemic heart disease, hypertension, and cardiac arrhythmias; in patients with hyperthyroidism or diabetes mellitus; and in patients who are unusually responsive to sympathomimetic amines or who have convulsive disorders. Significant changes in systolic and diastolic blood pressure have been seen and could be expected to occur in some patients after use of any beta-adrenergic bronchodilator.

Immediate hypersensitivity reactions and exacerbations of bronchospasm have been reported after terbutaline administration.

Beta-adrenergic agonist medications may produce significant hypokalemia in some patients, possibly through intracellular shunting, which has the potential to produce adverse cardiovascular effects. The decrease is usually transient, not requiring supplementation.

Large doses of intravenous terbutaline have been reported to aggravate pre-existing diabetes mellitus and ketoacidosis.

The concomitant use of Terbutaline Sulfate Injection, USP with other sympathomimetic agents is not recommended, since the combined effect on the cardiovascular system may be deleterious to the patient.

Terbutaline should be administered with extreme caution to patients being treated with monoamine oxidase inhibitors or tricyclic antidepressants, or within two weeks of discontinuation of such agents, since the action of terbutaline on the vascular system may be potentiated.

Beta-adrenergic receptor blocking agents not only block the pulmonary effect of beta-agonists, such as Terbutaline Sulfate Injection, USP, but may produce severe bronchospasm in asthmatic patients. Therefore, patients with asthma should not normally be treated with beta-blockers. However, under certain circumstances, e.g., as prophylaxis after myocardial infarction, there may be no acceptable alternatives to the use of beta-adrenergic blocking agents in patients with asthma. In this setting, cardioselective beta-blockers could be considered, although they should be administered with caution.

Reproductive studies in rats using terbutaline sulfate demonstrated no impairment of fertility at oral doses up to 50 mg/kg (approximately 810 times the maximum recommended daily sc dose for adults on a mg/m2 basis.)

There are no adequate and well-controlled studies of terbutaline sulfate in pregnant women. Published animal studies show that rat offspring exhibit alterations in behavior and brain development, including decreased cellular proliferation and differentiation when dams where treated subcutaneously with terbutaline during the late stage of pregnancy and lactation period. Terbutaline exposures in rat dams were approximately 24 to 48 times the common human dose in adults of 2-4 mg/day, on a mg/m2 basis.

Terbutaline sulfate has not been approved and should not be used for prolonged tocolysis (beyond 48-72 hours). In particular, terbutaline sulfate should not be used for maintenance tocolysis in the outpatient or home setting. Serious adverse reactions, including death, have been reported after administration of terbutaline sulfate to pregnant women. In the mother, these adverse reactions include increased heart rate, transient hyperglycemia, hypokalemia, cardiac arrhythmias, pulmonary edema and myocardial ischemia. Increased fetal heart rate and neonatal hypoglycemia may occur as a result of maternal administration. [See Boxed Warning, Prolonged Tocolysis and Contraindications, Prolonged Tocolysis.]

In animal embryofetal developmental studies, no teratogenic effects were observed in offspring when pregnant rats and rabbits received terbutaline sulfate at oral doses up to 50 mg/kg/day, approximately 810 and 1600 times, respectively, the maximum recommended daily subcutaneous dose for adults, on a mg/m2 basis.

Because of the potential for beta-agonist interference with uterine contractility, use of Terbutaline Sulfate Injection, USP for relief of bronchospasm during labor should be restricted to those patients in whom the benefits clearly outweigh the risk. Terbutaline crosses the placenta. After single dose IV administration of terbutaline to 22 women in late pregnancy who were delivered by elective Cesarean section due to clinical reasons, umbilical blood levels of terbutaline were found to range from 11% to 48% of the maternal blood levels.

It is not known whether this drug is excreted in human milk. Therefore, Terbutaline Sulfate Injection, USP should be used during nursing only if the potential benefit justifies the possible risk to the newborn.

Terbutaline Sulfate Injection, USP is not recommended for patients under the age of 12 years because of insufficient clinical data to establish safety and effectiveness.

Clinical Studies of terbutaline sulfate injection did not include sufficient numbers of subjects aged 65 and over to determine whether they respond differently from younger subjects. Other reported clinical experience has not identified differences in responses between the elderly and younger patients. In general, dose selection for an elderly patient should be cautious, usually starting at the low end of the dosing range, reflecting the greater frequency of decreased hepatic, renal, or cardiac function, and of concomitant disease or other drug therapy.

Adverse reactions observed with Terbutaline Sulfate Injection, USP are similar to those commonly seen with other sympathomimetic agents. All these reactions are transient in nature and usually do not require treatment.

The expected symptoms with overdosage are those of excessive beta-adrenergic stimulation and/or occurrence or exaggeration of any of the symptoms listed under ADVERSE REACTIONS, e.g., seizures, angina, hypertension or hypotension, tachycardia with rates up to 200 beats per minute, arrhythmias, nervousness, headache, tremor, dry mouth, palpitation, nausea, dizziness, fatigue, malaise, and insomnia. Hypokalemia may also occur. There is no specific antidote. Treatment consists of discontinuation of Terbutaline Sulfate injection, USP together with appropriate symptomatic therapy. The judicious use of a cardioselective beta-receptor blocker may be considered, bearing in mind that such medication can produce bronchospasm. There is insufficient evidence to determine if dialysis is beneficial for overdosage of terbutaline sulfate.

Ampules should be used only for subcutaneous administration and not intravenous infusion. Sterility and accurate dosing cannot be assured if the ampules are not used in accordance with DOSAGE AND ADMINISTRATION.

The usual subcutaneous dose of Terbutaline Sulfate Injection, USP is 0.25 mg injected into the lateral deltoid area. If significant clinical improvement does not occur within 15-30 minutes, a second dose of 0.25 mg may be administered. If the patient then fails to respond within another 15-30 minutes, other therapeutic measures should be considered. The total dose within 4 hours should not exceed 0.5 mg.

Note: Parenteral drug products should be inspected visually for particulate matter and discoloration prior to administration, whenever solution and container permit.

Ampules 1 mg/mL – The drug is supplied at a volume of 1 mL contained in a 2 mL clear glass ampule. Each ampule contains 1 mg of terbutaline sulfate per 1 mL of solution; 0.25 mL of solution will provide the clinical dose of 0.25 mg.

Ampules are expiration-dated
Discard unused portion after single patient use.

Protect from light by storing ampules in original carton until dispensed.

Do not use if solution is discolored. 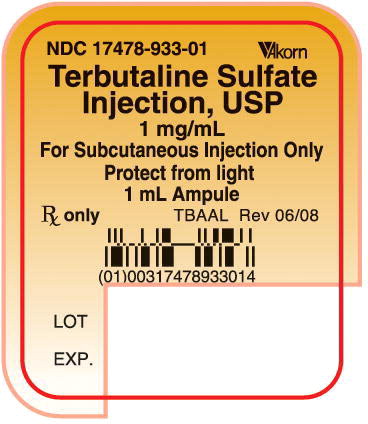 Do not use if solution is discolored         Singles-dose Ampules 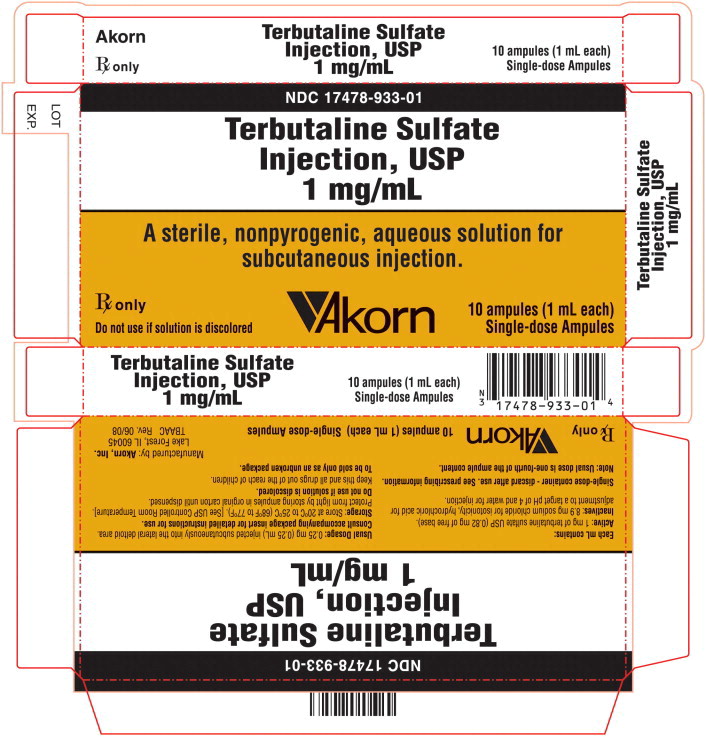