For intramuscular, intravenous, and oral use in dogs and cats.

Caution: Federal (USA) law restricts this drug to use by or on the order of a  licensed veterinarian.

LINCOCIN products contain lincomycin hydrochloride, an antibiotic produced by Streptomyces lincolnensis var. lincolnensis, which is chemically distinct from all other clinically available antibiotics and is isolated as a white crystalline solid. It is stable in the dry state and in aqueous solution for at least 24 months. Lincomycin hydrochloride is readily soluble in water at room temperature in concentrations up to 500 mg/mL. Physical stability of aqueous solutions can be maintained at drug concentrations up to 345 mg/mL at temperatures as low as 4° C. The solubility in 95 percent ethanol is 80 mg/mL.

LINCOCIN products have been shown to be effective against most of the common gram-positive pathogens. Depending on the sensitivity of the organism and concentration of the antibiotic, it may be either bactericidal or bacteriostatic. It has not shown cross resistance with other available antibiotics. Microorganisms have not developed resistance to LINCOCIN rapidly when tested by in vitro or in vivo methods.

Administered intramuscularly, LINCOCIN Sterile Solution is very rapidly absorbed. In studies with dogs, peak serum levels were reached in from ten minutes to two hours with detectable levels for 16 to 24 hours. The concentration of LINCOCIN in the blood serum varies with the dose administered and with the individual animal. Levels are maintained above the in vitro minimum inhibitory concentration for most gram-positive organisms for six to eight hours following a therapeutic dose. Intravenous administration also provides very rapid absorption, but should be administered with normal saline or 5% glucose as an intravenous drip infusion.

Administered orally to dogs, LINCOCIN was also rapidly absorbed with serum levels present within one-half hour; peak values were reached at two to four hours; and detectable levels persisted for 16 to 24 hours.

Cross resistance has not been demonstrated with penicillin, erythromycin, triacetyloleandomycin, chloramphenicol, novobiocin, streptomycin, or the tetracyclines. Staphylococci develop resistance to LINCOCIN in a slow, stepwise manner based on in vitro, serial subculture experiments. This pattern of resistance development is unlike that shown for streptomycin.

LINCOCIN products are indicated in infections caused by gram-positive organisms which are sensitive to its action, particularly streptococci and staphylococci. The drug has proven effective in eradicating causative organisms in most of the common upper respiratory tract infections, in septicemia, and in infections of the skin and adjoining tissues.

Systemic therapy with LINCOCIN has been shown to be of benefit in many animals with pustular dermatitis. As with all antibiotics, in vitro sensitivity studies should be performed before LINCOCIN is utilized as sole antibiotic therapy.

LINCOCIN has been demonstrated to be effective in the treatment of staphylococcal infections resistant to other antibiotics and sensitive to lincomycin. The drug may be administered in combination therapy with other antimicrobial agents when indicated.

LINCOCIN has demonstrated excellent efficacy in the treatment of upper respiratory infections and of skin diseases, particularly those caused by staphylococcus and streptococcus organisms. LINCOCIN has demonstrated efficacy even in some chronic conditions of long standing and in infections which have resisted treatment with other antibacterial agents.

LINCOCIN has demonstrated efficacy in the treatment of localized infections, such as abscesses following fight wounds, pneumonitis, and feline rhinotracheitis.

Success in the treatment of viral diseases must be attributed to the control of susceptible secondary bacterial invaders rather than to any effect of LINCOCIN on the virus.

animals previously found to be hypersensitive to the drug. LINCOCIN should not be given to animals with known preexisting monilial infections.

The following species are sensitive to the gastrointestinal effects of lincomycin: rabbits, hamsters, guinea pigs and horses. Therefore, the administration of LINCOCIN should be avoided in these species.

Not for human use.

The use of antibiotics occasionally results in overgrowth of nonsusceptible organisms—particularly yeasts. Should superinfections occur, appropriate measures should be taken.

Loose stools occasionally have been observed in dogs and cats on oral doses. Vomiting in cats has occasionally been reported following oral administration.

Intramuscularly and intravenously, LINCOCIN products have demonstrated excellent local tolerance with no reports of pain or inflammation following injection.

5 to 10 mg per pound of body weight one or two times per day diluted with 5 percent glucose in water or normal saline and given as a drip infusion.

As with any multi-dose vial, practice aseptic techniques in withdrawing each dose. Adequately clean and disinfect the vial closure prior to entry with a sterile needle and syringe.

The acute LD50 intraperitoneally in mice is 1000 mg/kg and orally in rats is 15,645 mg/kg. LINCOCIN was well tolerated orally in rats and dogs at doses up to 300 mg/kg/day for periods up to one year. Parenteral dosages of up to 60 mg/kg/day for 30 days subcutaneously in the rat and intramuscularly in the dog produced no significant systemic effects or pathological findings at necropsy.

LINCOCIN at a daily dose level of 75 mg/kg subcutaneously was injected into mature male and female rats during a prebreeding period of 60 days and throughout two mating cycles (84 days). No evidence was obtained that LINCOCIN exerted any effects on breeding performance and no drug-induced anomalies were discovered in the young. Similarly no evidence was obtained that LINCOCIN, when given in sustained parenteral dosage of 50 mg/kg daily to pregnant bitches, produced a teratogenic effect on the canine embryo.

The subcutaneous LD50 value in the newborn rat was determined to be 783 mg/kg. Newborn rats and canine pups have tolerated multiple doses of 30-90 mg/kg/day of the drug without evidence of ill effects.

LINCOCIN products for veterinary use are available in the following dosage forms and strengths:

Equivalent to
50 mg per mL
lincomycin

Caution: Federal (USA) law
restricts this drug to use by or on
the order of a licensed veterinarian. 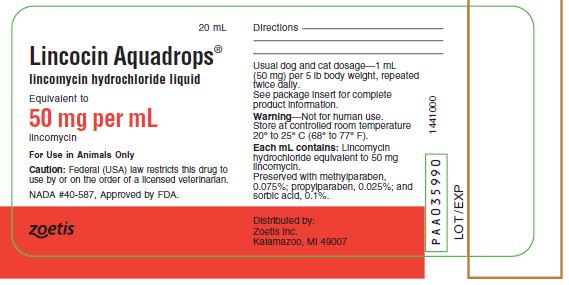