Pyrimethamine, known chemically as 5-(4-chlorophenyl)-6-ethyl-2,4-pyrimidinediamine, has the following structural formula:

Pyrimethamine is well absorbed with peak levels occurring between 2 to 6 hours following administration. It is eliminated slowly and has a plasma half-life of approximately 96 hours. Pyrimethamine is 87% bound to human plasma proteins.

Microbiology: Pyrimethamine is a folic acid antagonist and the rationale for its therapeutic action is based on the differential requirement between host and parasite for nucleic acid precursors involved in growth. This activity is highly selective against plasmodia and Toxoplasma gondii.

Pyrimethamine possesses blood schizonticidal and some tissue schizonticidal activity against malaria parasites of humans. However, the 4-amino-quinoline compounds are more effective against the erythrocytic schizonts. It does not destroy gametocytes, but arrests sporogony in the mosquito.

The action of pyrimethamine against Toxoplasma gondii is greatly enhanced when used in conjunction with sulfonamides. This was demonstrated by Eyles and Coleman1 in the treatment of experimental toxoplasmosis in the mouse. Jacobs et al2 demonstrated that combination of the 2 drugs effectively prevented the development of severe uveitis in most rabbits following the inoculation of the anterior chamber of the eye with toxoplasma.

Treatment of Toxoplasmosis: DARAPRIM is indicated for the treatment of toxoplasmosis when used conjointly with a sulfonamide, since synergism exists with this combination.

Chemoprophylaxis of Malaria: DARAPRIM is indicated for the chemoprophylaxis of malaria due to susceptible strains of plasmodia. However, resistance to pyrimethamine is prevalent worldwide. It is not suitable as a prophylactic agent for travelers to most areas.

The dosage of pyrimethamine required for the treatment of toxoplasmosis is 10 to 20 times the recommended antimalaria dosage and approaches the toxic level. If signs of folate deficiency develop (see ADVERSE REACTIONS), reduce the dosage or discontinue the drug according to the response of the patient. Folinic acid (leucovorin) should be administered in a dosage of 5 to 15 mg daily (orally, IV, or IM) until normal hematopoiesis is restored.

Pyrimethamine has been reported to produce a significant increase in the number of lung tumors in mice when given intraperitoneally at doses of 25 mg/kg.5

DARAPRIM should be kept out of the reach of infants and children as they are extremely susceptible to adverse effects from an overdose. Deaths in pediatric patients have been reported after accidental ingestion.

General: The recommended dosage for chemoprophylaxis of malaria should not be exceeded. A small “starting” dose for toxoplasmosis is recommended in patients with convulsive disorders to avoid the potential nervous system toxicity of pyrimethamine. DARAPRIM should be used with caution in patients with impaired renal or hepatic function or in patients with possible folate deficiency, such as individuals with malabsorption syndrome, alcoholism, or pregnancy, and those receiving therapy, such as phenytoin, affecting folate levels (see Pregnancy subsection).

Information for Patients: Patients should be warned that at the first appearance of a skin rash they should stop use of DARAPRIM and seek medical attention immediately. Patients should also be warned that the appearance of sore throat, pallor, purpura, or glossitis may be early indications of serious disorders which require treatment with DARAPRIM to be stopped and medical treatment to be sought.

Concurrent administration of folinic acid is strongly recommended when used for the treatment of toxoplasmosis in all patients.

Laboratory Tests: In patients receiving high dosage, as for the treatment of toxoplasmosis, semiweekly blood counts, including platelet counts, should be performed.

Drug Interactions: Pyrimethamine may be used with sulfonamides, quinine and other antimalarials, and with other antibiotics. However, the concomitant use of other antifolic drugs or agents associated with myelosuppression including sulfonamides or trimethoprim-sulfamethoxazole combinations, proguanil, zidovudine, or cytostatic agents (e.g., methotrexate), while the patient is receiving pyrimethamine, may increase the risk of bone marrow suppression. If signs of folate deficiency develop, pyrimethamine should be discontinued. Folinic acid (leucovorin) should be administered until normal hematopoiesis is restored (see WARNINGS). Mild hepatotoxicity has been reported in some patients when lorazepam and pyrimethamine were administered concomitantly.

Mutagenesis: Pyrimethamine has been shown to be nonmutagenic in the following in vitro assays: the Ames point mutation assay, the Rec assay, and the E. coli WP2 assay. It was positive in the L5178Y/TK +/- mouse lymphoma assay in the absence of exogenous metabolic activation.6 Human blood lymphocytes cultured in vitro had structural chromosome aberrations induced by pyrimethamine.

In vivo, chromosomes analyzed from the bone marrow of rats dosed with pyrimethamine showed an increased number of structural and numerical aberrations.

Pregnancy: Teratogenic Effects: Pregnancy Category C. Pyrimethamine has been shown to be teratogenic in rats when given in oral doses 7 times the human dose for chemoprophylaxis of malaria or 2.5 times the human dose for treatment of toxoplasmosis. At these doses in rats, there was a significant increase in abnormalities such as cleft palate, brachygnathia, oligodactyly, and microphthalmia. Pyrimethamine has also been shown to produce terata such as meningocele in hamsters and cleft palate in miniature pigs when given in oral doses 170 and 5 times the human dose, respectively, for chemoprophylaxis of malaria or for treatment of toxoplasmosis.

There are no adequate and well-controlled studies in pregnant women. DARAPRIM should be used during pregnancy only if the potential benefit justifies the potential risk to the fetus.

Concurrent administration of folinic acid is strongly recommended when used for the treatment of toxoplasmosis during pregnancy.

Nursing Mothers: Pyrimethamine is excreted in human milk. Because of the potential for serious adverse reactions in nursing infants from pyrimethamine and from concurrent use of a sulfonamide with DARAPRIM for treatment of some patients with toxoplasmosis, a decision should be made whether to discontinue nursing or to discontinue the drug, taking into account the importance of the drug to the mother (see WARNINGS and PRECAUTIONS: Pregnancy).

Geriatric Use: Clinical studies of DARAPRIM did not include sufficient numbers of subjects aged 65 and over to determine whether they respond differently from younger subjects. Other reported clinical experience has not identified differences in responses between the elderly and younger patients. In general, dose selection for an elderly patient should be cautious, usually starting at the low end of the dosing range, reflecting the greater frequency of decreased hepatic, renal, or cardiac function, and of concomitant disease or other drug therapy.

Hypersensitivity reactions, occasionally severe (such as Stevens-Johnson syndrome, toxic epidermal necrolysis, erythema multiforme, and anaphylaxis), and hyperphenylalaninemia, can occur particularly when pyrimethamine is administered concomitantly with a sulfonamide. Consult the complete prescribing information for the relevant sulfonamide for sulfonamide-associated adverse events. With doses of pyrimethamine used for the treatment of toxoplasmosis, anorexia and vomiting may occur. Vomiting may be minimized by giving the medication with meals; it usually disappears promptly upon reduction of dosage. Doses used in toxoplasmosis may produce megaloblastic anemia, leukopenia, thrombocytopenia, pancytopenia, atrophic glossitis, hematuria, and disorders of cardiac rhythm. Hematologic effects, however, may also occur at low doses in certain individuals (see PRECAUTIONS; General).

Pulmonary eosinophilia has been reported rarely.

Following the ingestion of 300 mg or more of pyrimethamine, gastrointestinal and/or central nervous system signs may be present, including convulsions. The initial symptoms are usually gastrointestinal and may include abdominal pain, nausea, severe and repeated vomiting, possibly including hematemesis. Central nervous system toxicity may be manifest by initial excitability, generalized and prolonged convulsions which may be followed by respiratory depression, circulatory collapse, and death within a few hours. Neurological symptoms appear rapidly (30 minutes to 2 hours after drug ingestion), suggesting that in gross overdosage pyrimethamine has a direct toxic effect on the central nervous system.

The fatal dose is variable, with the smallest reported fatal single dose being 375 mg. There are, however, reports of pediatric patients who have recovered after taking 375 to 625 mg.

There is no specific antidote to acute pyrimethamine poisoning. In the event of overdosage, symptomatic and supportive measures should be employed. Gastric lavage is recommended and is effective if carried out very soon after drug ingestion. Parenteral diazepam may be used to control convulsions. Folinic acid should be administered within 2 hours of drug ingestion to be most effective in counteracting the effects on the hematopoietic system (see WARNINGS). Due to the long half-life of pyrimethamine, daily monitoring of peripheral blood counts is recommended for up to several weeks after the overdose until normal hematologic values are restored.

For Treatment of Toxoplasmosis: The dosage of DARAPRIM for the treatment of toxoplasmosis must be carefully adjusted so as to provide maximum therapeutic effect and a minimum of side effects. At the dosage required, there is a marked variation in the tolerance to the drug. Young patients may tolerate higher doses than older individuals. Concurrent administration of folinic acid is strongly recommended in all patients.

The adult starting dose is 50 to 75 mg of the drug daily, together with 1 to 4 g daily of a sulfonamide of the sulfapyrimidine type, e.g. sulfadoxine. This dosage is ordinarily continued for 1 to 3 weeks, depending on the response of the patient and tolerance to therapy. The dosage may then be reduced to about one half that previously given for each drug and continued for an additional 4 to 5 weeks.

The pediatric dosage of DARAPRIM is 1 mg/kg/day divided into 2 equal daily doses; after 2 to 4 days this dose may be reduced to one half and continued for approximately 1 month. The usual pediatric sulfonamide dosage is used in conjunction with DARAPRIM.

For Treatment of Acute Malaria: DARAPRIM is NOT recommended alone in the treatment of acute malaria. Fast-acting schizonticides, such as chloroquine or quinine, are indicated for treatment of acute malaria. However, DARAPRIM at a dosage of 25 mg daily for 2 days with a sulfonamide will initiate transmission control and suppression of non-falciparum malaria. DARAPRIM is only recommended for patients infected in areas where susceptible plasmodia exist. Should circumstances arise wherein DARAPRIM must be used alone in semi-immune persons, the adult dosage for acute malaria is 50 mg for 2 days; children 4 through 10 years old may be given 25 mg daily for 2 days. In any event, clinical cure should be followed by the once-weekly regimen described below for chemoprophylaxis. Regimens which include suppression should be extended through any characteristic periods of early recrudescence and late relapse, i.e., for at least 10 weeks in each case. 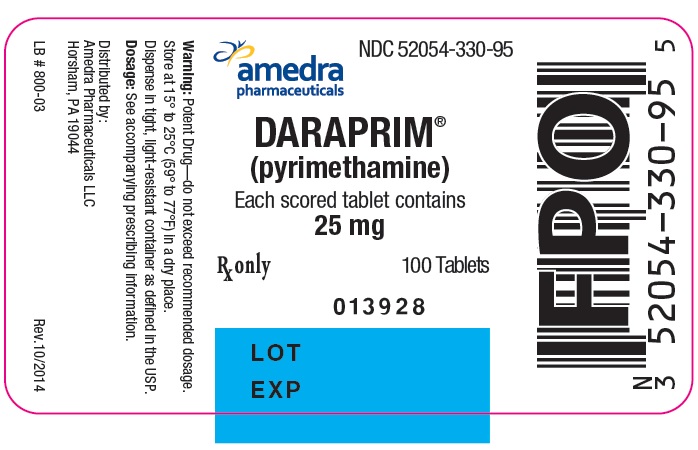