FLUVIRIN® is an inactivated influenza virus vaccine indicated for immunization of persons 4 years of age and older against influenza virus disease caused by influenza virus subtypes A and type B contained in the vaccine [see DOSAGE FORMS AND STRENGTHS (3)].

FLUVIRIN® is not indicated for children less than 4 years of age because there is evidence of diminished immune response in this age group.

Shake the syringe vigorously before administering the vaccine and shake the multidose vial preparation each time before withdrawing a dose of vaccine.

Inspect FLUVIRIN® syringes and multidose vials visually for particulate matter and/or discoloration prior to administration [see DESCRIPTION (11)]. If either of these conditions exists, the vaccine should not be administered.

Between uses, return the multidose vial to the recommended storage conditions between 2º and 8ºC (36º and 46ºF). Do not freeze. Discard if the vaccine has been frozen.

A separate sterile syringe and needle must be used for each injection to prevent transmission of infectious agents from one person to another. Needles should be disposed of properly and not recapped.

It is recommended that small syringes (0.5 mL or 1 mL) should be used to minimize any product loss.

For intramuscular use only.

The dose and schedule for Fluvirin is presented in Table 1.

In children, the needle size may range from 7/8 to 1¼ inches, depending on the size of the child's deltoid muscle, and should be of sufficient length to penetrate the muscle tissue. The anterolateral thigh can be used, but the needle should be longer, usually 1 inch.

In adults, a needle of ≥1 inch is preferred because needles <1 inch might be of insufficient length to penetrate muscle tissue in certain adults. The preferred site for intramuscular injection is the deltoid muscle of the upper arm. The vaccine should not be injected in the gluteal region or areas where there may be a major nerve trunk.

FLUVIRIN®, a sterile suspension for intramuscular injection, is supplied in two presentations:

Do not administer FLUVIRIN® to anyone with known history of severe allergic reactions (e.g., anaphylaxis) to egg proteins (eggs or egg products), or to any component of FLUVIRIN®, or who has had a life-threatening reaction to previous influenza vaccinations.

If Guillain-Barré syndrome has occurred within 6 weeks of receipt of prior influenza vaccine, the decision to give FLUVIRIN® should be based on careful consideration of the potential benefits and risks.

If FLUVIRIN® is administered to immunocompromised persons, including individuals receiving immunosuppressive therapy, the expected immune response may not be obtained.

Prior to administration of any dose of FLUVIRIN®, the healthcare provider should review the patient's prior immunization history for possible adverse events, to determine the existence of any contraindication to immunization with FLUVIRIN® and to allow an assessment of benefits and risks. Appropriate medical treatment and supervision must be available to manage possible anaphylactic reactions following administration of the vaccine.

The tip caps of the FLUVIRIN® prefilled syringes may contain natural rubber latex which may cause allergic reactions in latex sensitive individuals.

Vaccination with FLUVIRIN® may not protect all individuals.

Serious allergic reactions, including anaphylactic shock, have been observed in individuals receiving FLUVIRIN® during postmarketing surveillance.

Safety data were collected in a total of 2768 adult and geriatric subjects (18 years of age and older) who have received FLUVIRIN® in 29 clinical studies since 1982.

After vaccination, the subjects were observed for 30 minutes for hypersensitivity or other immediate reactions. Subjects were instructed to complete a diary card for three days following immunization (i.e. Day 1 to 4) to collect local and systemic reactions (see Tables 2 and 3). All local and systemic adverse events were considered to be at least possibly related to the vaccine. Local and systemic reactions mostly began between day 1 and day 2. The overall adverse events reported in clinical trials since 1998 in at least 5% of the subjects are summarized in Table 4.

The most common overall events in elderly subjects (≥65 years of age) were headache and fatigue.

In 1987 a clinical study was carried out in 38 ‘at risk’ children aged between 4 and 12 years (17 females and 21 males). To record the safety of FLUVIRIN®, participants recorded their symptoms on a diary card during the three days after vaccination and noted any further symptoms they thought were attributable to the vaccine. The only reactions recorded were tenderness at the site of vaccination in 21% of the participants on day 1, which was still present in 16% on day 2 and 5% on day 3. In one child, the tenderness was also accompanied by redness at the site of injection for two days. The reactions were not age-dependent and there was no bias towards the younger children.

Three clinical studies were carried out between 1995 and 2004 in a total of 520 pediatric subjects (age range 6 - 47 months). Of these, 285 healthy subjects plus 41 ‘at risk’ subjects received FLUVIRIN®. No serious adverse events were reported.

FLUVIRIN® should only be used for the immunization of persons aged 4 years and over.

The following additional adverse reactions have been reported during post-approval use of FLUVIRIN®. Because these reactions are reported voluntarily from a population of uncertain size, it is not always possible to reliably estimate their frequency or establish a causal relationship to vaccine exposure. Adverse events described here are included because: a) they represent reactions which are known to occur following immunizations generally or influenza immunizations specifically; b) they are potentially serious; or c) the frequency of reporting.

Anaphylaxis has been reported after administration of FLUVIRIN®. Although FLUVIRIN® contains only a limited quantity of egg protein, this protein can induce immediate hypersensitivity reactions among persons who have severe egg allergy. Allergic reactions include hives, angioedema, allergic asthma, and systemic anaphylaxis [see CONTRAINDICATIONS (4)].

The 1976 swine influenza vaccine was associated with an increased frequency of Guillain-Barré syndrome (GBS). Evidence for a causal relation of GBS with subsequent vaccines prepared from other influenza viruses is unclear. If influenza vaccine does pose a risk, it is probably slightly more than 1 additional case/1 million persons vaccinated.

7.1 Concomitant Administration with Other Vaccines

There are no data to assess the concomitant administration of FLUVIRIN® with other vaccines. If FLUVIRIN® is to be given at the same time as another injectable vaccine(s), the vaccines should always be administered at different injection sites.

FLUVIRIN® should not be mixed with any other vaccine in the same syringe or vial.

7.2 Concurrent Use with Immunosuppressive Therapies

The safety and immunogenicity of FLUVIRIN® have not been established in children under 4 years of age.

Antibody responses were lower in the geriatric population than in younger subjects. Adverse events occurred less frequently in geriatric subjects (≥65 years) than in younger adults. Other reported clinical experience has not identified differences in responses between the elderly and younger patients. [See ADVERSE REACTION (6) and CLINICAL STUDIES (14)].

FLUVIRIN® is a homogenized, sterile, slightly opalescent suspension in a phosphate buffered saline. FLUVIRIN® has been standardized according to USPHS requirements for the 2013-2014 influenza season and is formulated to contain 45 mcg hemagglutinin (HA) per 0.5-mL dose in the recommended ratio of 15 mcg HA of each of the following 3 viruses:

The 0.5-mL prefilled syringe presentation is formulated without preservative. However, thimerosal, a mercury derivative used during manufacturing, is removed by subsequent purification steps to a trace amount (≤ 1 mcg mercury per 0.5-mL dose).

Each dose from the multidose vial or from the prefilled syringe may also contain residual amounts of egg proteins (≤ 1 mcg ovalbumin), polymyxin (≤ 3.75 mcg), neomycin (≤ 2.5 mcg), betapropiolactone (not more than 0.5 mcg) and nonylphenol ethoxylate (not more than 0.015% w/v).

The tip caps of the FLUVIRIN® prefilled syringes may contain natural rubber latex. The multidose vial stopper and the syringe stopper/plunger do not contain latex.

Annual revaccination with the current vaccine is recommended because immunity declines during the year after vaccination, and because circulating strains of influenza virus change from year to year [see REFERENCES (15.3)].

FLUVIRIN® has not been evaluated for carcinogenic or mutagenic potential, or for impairment of fertility.

Between 1982 and 1991, twelve clinical studies were conducted in healthy adult and geriatric subjects and one in children between 4 and 12 years of age who were considered to be ‘at risk’. Since 1991 an annual clinical study has been conducted in the UK in healthy adults aged 18 years or older. FLUVIRIN® was also used as a control in a US clinical trial in adults (18-49 years of age). In all the trials, blood samples were taken prior to vaccination and approximately three weeks after vaccination to assess the immunogenic response to vaccination by measurement of anti-HA antibodies.

FLUVIRIN® should only be used for the immunization of persons aged 4 years and over.

Tables 5 and 6 show the immunogenicity data for the adult age group. The seven clinical studies presented enrolled a total of 774 adult subjects. In the adult group, for all antigens (A/H1N1, A/H3N2 and B) at least one of the following point estimate criteria was met: the proportion of subjects with seroconversion (post-vaccination titer ≥1:40 from a pre-vaccination titer <1:10) or significant increase (at least a four-fold increase from pre-vaccination titer ≥1:10) in antibody titer was greater than 40%; the geometric mean titer (GMT) increase was >2.5; the proportion of subjects with a post-vaccination hemagglutination inhibition (HI) antibody titer ≥1:40 was greater than 70%.

14.2 Immunogenicity in Geriatric Subjects (65 years of age and older)

Tables 7 and 8 show the immunogenicity of FLUVIRIN® in the geriatric age group. The six clinical studies presented enrolled a total of 296 geriatric subjects. For each of the influenza antigens, the percentage of subjects who achieved seroconversion and the percentage of subjects who achieved HI titers of ≥1:40 are shown, as well as the fold increase in GMT.

For all antigens (A/H1N1, A/H3N2 and B) at least one of the following point estimate criteria was met: the proportion of subjects with seroconversion (post-vaccination titer ≥1:40 from a pre-vaccination titer <1:10) or significant increase (at least a four-fold increase from pre-vaccination titer ≥1:10) in antibody titer was greater than 30%; the geometric mean titer (GMT) increase was >2.0; the proportion of subjects with a post-vaccination hemagglutination inhibition (HI) antibody titer ≥1:40 was greater than 60%. The pre-specified efficacy criteria were met in each study, although a relatively lower immunogenicity of A/H1N1 strain was seen in the last four studies (the same strain was in each of the formulations).

14.2 Immunogenicity in Geriatric Subjects (65 years of age and over)

15.2 Hobson D, Curry RL, Beare A, et. al. The role of serum hemagglutinin-inhibiting antibody in protection against challenge infection with influenza A2 and B viruses. J Hyg Camb 1972; 767-777.

15.3 Centers for Disease Control and Prevention. Prevention and Control of Influenza with Vaccines. Recommendations of the Advisory Committee on Immunization Practices (ACIP). MMWR 2011; 60(33):1128-1132.

FLUVIRIN® product presentations are listed in Table 9 below:

Do not freeze. Discard if the vaccine has been frozen.

Store in the original package to protect from light.

Do not use after the expiration date.

Between uses, return the multidose vial to the recommended storage conditions.

Vaccine recipients and guardians should be informed by their health care provider of the potential benefits and risks of immunization with FLUVIRIN®. When educating vaccine recipients and guardians regarding the potential side effects, clinicians should emphasize that (1) FLUVIRIN® contains non-infectious particles and cannot cause influenza and (2) FLUVIRIN® is intended to provide protection against illness due to influenza viruses only, and cannot provide protection against all respiratory illness.

Vaccine recipients and guardians should be instructed to report any severe or unusual adverse reactions to their healthcare provider.

Vaccine recipients and guardians should be instructed that annual vaccination is recommended.

FLUVIRIN® is a registered trademark of Novartis Vaccines and Diagnostics Limited. 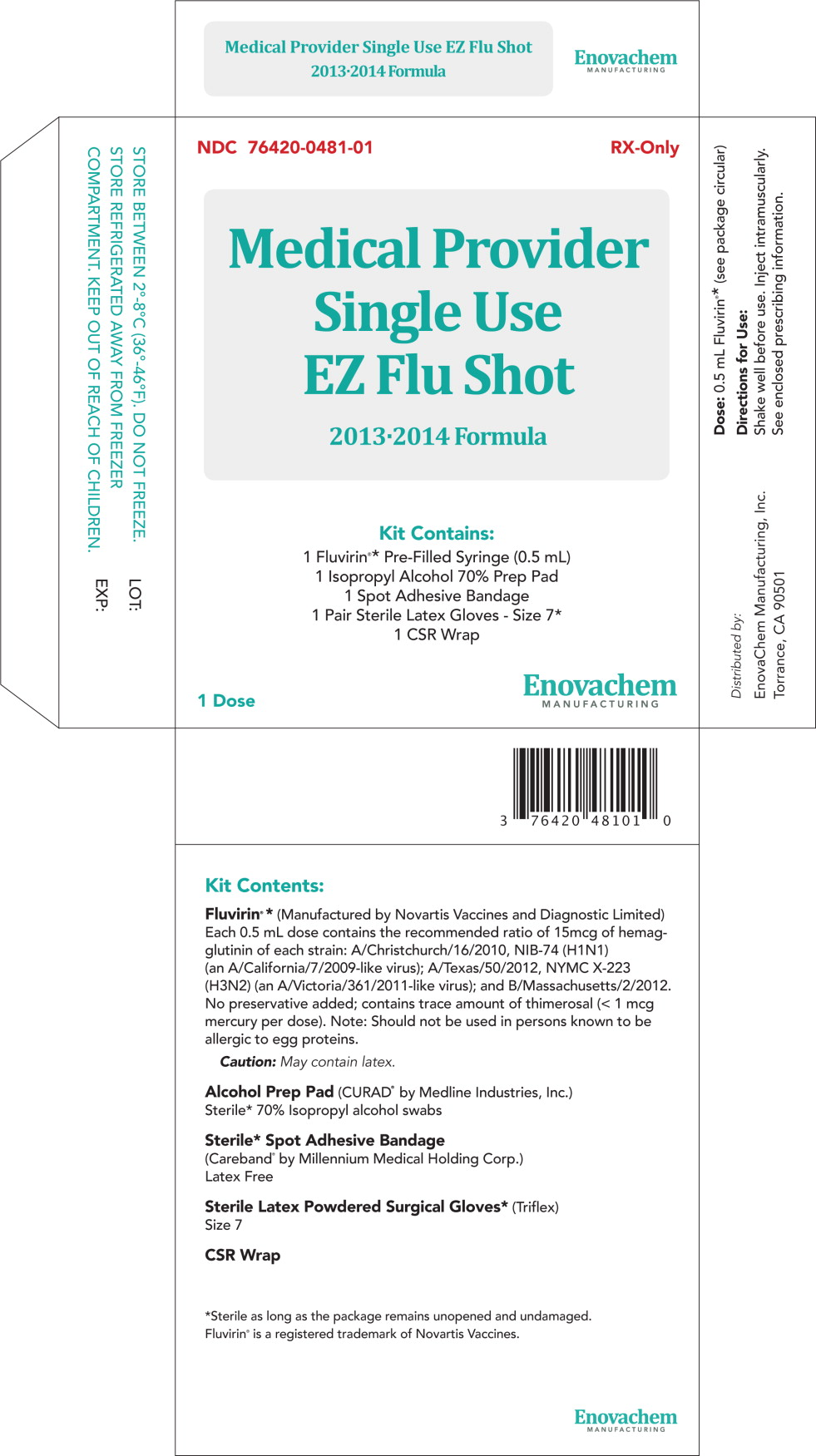 (unless package is damaged or opened) 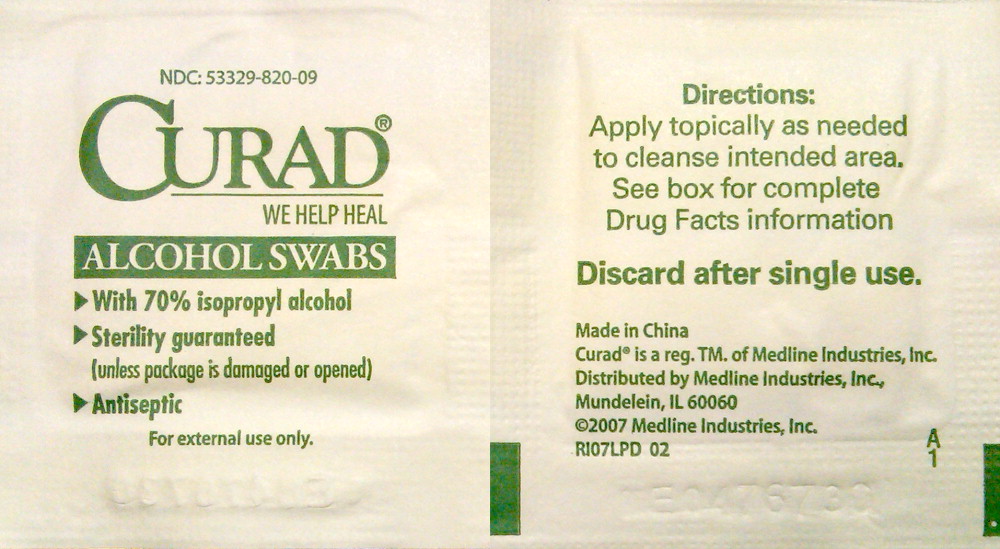 For four years of age and older 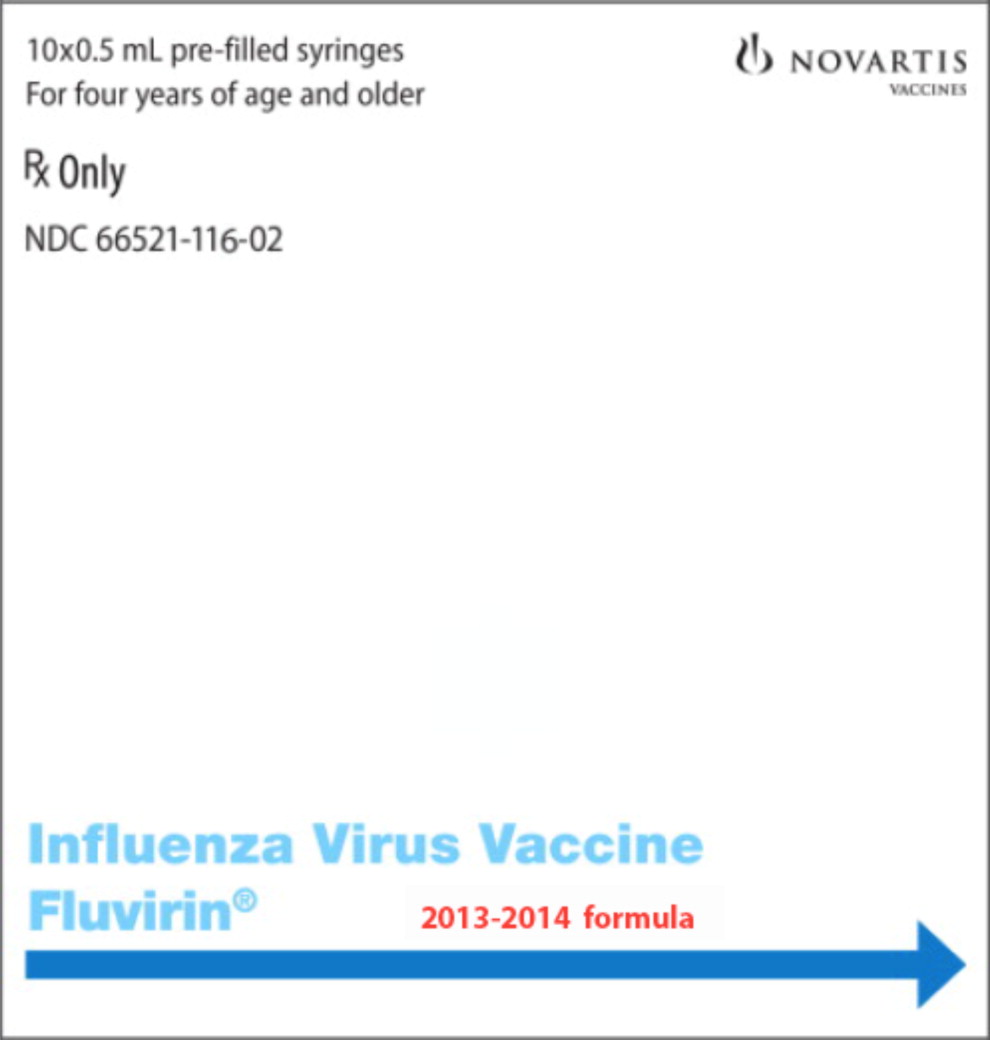