Dosing of ALBENZA will vary depending upon the indication. ALBENZA tablets may be crushed or chewed and swallowed with a drink of water. ALBENZA chewable tablets are also available for children and patients who may experience swallowing difficulties. ALBENZA tablets and ALBENZA chewable tablets should be taken with food [ see Clinical Pharmacology ( 12.3) ].

Patients being treated for neurocysticercosis should receive appropriate steroid and anticonvulsant therapy as required. Oral or intravenous corticosteroids should be considered to prevent cerebral hypertensive episodes during the first week of treatment [ see Warnings and Precautions ( 5.3) ].

ALBENZA may cause fetal harm and should not be used in pregnant women except in clinical circumstances where no alternative management is appropriate. Obtain pregnancy test prior to prescribing ALBENZA to women of reproductive potential. Advise women of reproductive potential to use effective birth control for the duration of ALBENZA therapy and for one month after end of therapy. Immediately discontinue ALBENZA if a patient becomes pregnant and apprise the patient of the potential hazard to the fetus [ see Use in Specific Populations ( 8.1) ].

In clinical trials, treatment with ALBENZA has been associated with mild to moderate elevations of hepatic enzymes in approximately 16% of patients. These elevations have generally returned to normal upon discontinuation of therapy. There have also been case reports of acute liver failure of uncertain causality and hepatitis [ see Adverse Reactions ( 6) ].

Blood and Lymphatic System Disorders: There have been reports of leukopenia, granulocytopenia, pancytopenia, agranulocytosis, or thrombocytopenia [ see Warnings and Precautions ( 5.1) ].

In patients with evidence of extrahepatic obstruction (n = 5), the systemic availability of albendazole sulfoxide was increased, as indicated by a 2-fold increase in maximum serum concentration and a 7-fold increase in area under the curve. The rate of absorption/conversion and elimination of albendazole sulfoxide appeared to be prolonged with mean T max and serum elimination half-life values of 10 hours and 31.7 hours, respectively. Plasma concentrations of parent ALBENZA were measurable in only 1 of 5 patients.

ALBENZA (albendazole) is an orally administered anthelmintic drug. Chemically, it is methyl 5-(propylthio)-2-benzimidazolecarbamate. Its molecular formula is C 12H 15N 3O 2S. Its molecular weight is 265.34. It has the following chemical structure:

Each round, mottled pink, concave chewable tablet is debossed with “ap” above “551” and contains 200 mg of albendazole.

Albendazole did not adversely affect male or female fertility in the rat at an oral dose of 30 mg/kg/day (0.32 times the recommended human dose based on body surface area in mg/m 2).

Each round, mottled pink, concave chewable tablet is debossed with “ap” above “551” and contains 200 mg of albendazole. 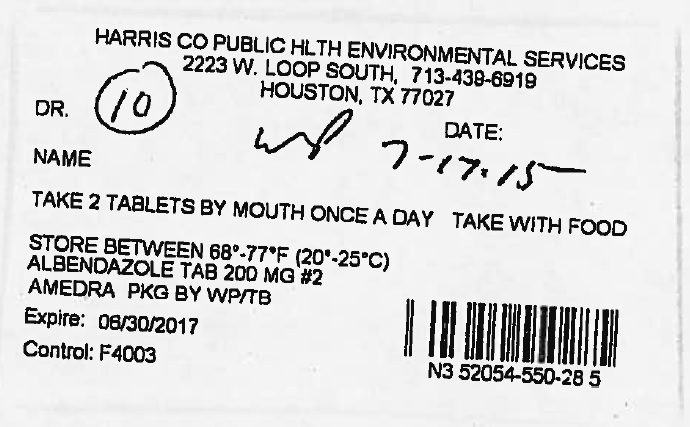