EPINEPHRINE
Injection, USP
1 mg/mL
Ampul
Protect from light until ready to use.

The solution contains no bacteriostat or antimicrobial agent. It is administered by the following routes: intravenous, intracardiac (left ventricular chamber), via endotracheal tube into the bronchial tree, subcutaneous or intramuscular. 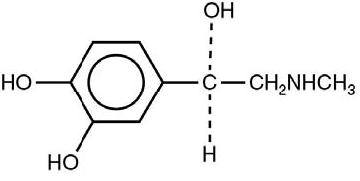 The actions of epinephrine resemble the effects of stimulation of adrenergic nerves. To a variable degree it acts on both alpha and beta receptor sites of sympathetic effector cells. Its most prominent actions are on the beta receptors of the heart, vascular and other smooth muscle. When given by rapid intravenous injection, it produces a rapid rise in blood pressure, mainly systolic, by (1) direct stimulation of cardiac muscle which increases the strength of ventricular contraction, (2) increasing the heart rate and (3) constriction of the arterioles in the skin, mucosa and splanchnic areas of the circulation.

When given by slow intravenous injection epinephrine usually produces only a moderate rise in systolic and a fall in diastolic pressure. Although some increase in pulse pressure occurs, there is usually no great elevation in mean blood pressure. Accordingly, the compensatory reflex mechanisms that come into play with a pronounced increase in blood pressure do not antagonize the direct cardiac actions of epinephrine as much as with catecholamines that have a predominant action on alpha receptors.

Total peripheral resistance decreases by action of epinephrine on beta receptors of the skeletal muscle vasculature and blood flow is thereby enhanced. Usually this vasodilator effect of the drug on the circulation predominates so that the modest rise in systolic pressure which follows slow injection or absorption is mainly the result of direct cardiac stimulation and increase in cardiac output. In some instances peripheral resistance is not altered or may even rise owing to a greater ratio of alpha to beta activity in different vascular areas.

Epinephrine relaxes the smooth muscles of the bronchi and iris and is a physiologic antagonist of histamine. The drug also produces an increase in blood sugar and glycogenolysis in the liver.

Epinephrine is rapidly inactivated in the body and is degraded by enzymes in the liver and other tissues.

Epinephrine is used to relieve respiratory distress due to bronchospasm, to provide rapid relief of hypersensitivity reactions to drugs and other allergens, and to prolong the action of anesthetics. Its cardiac effects may be of use in restoring cardiac rhythm in cardiac arrest due to various causes, but it is not used in cardiac failure or in hemorrhagic, traumatic, or cardiogenic shock. Epinephrine is used as a hemostatic agent. It is also used in treating mucosal congestion of hay fever, rhinitis, and acute sinusitis; to relieve bronchial asthmatic paroxysms; in syncope due to complete heart block or carotid sinus hypersensitivity; for symptomatic relief of serum sickness, urticaria, angioneurotic edema; for resuscitation in cardiac arrest following anesthetic accidents; in simple (open angle) glaucoma; for relaxation of uterine musculature and to inhibit uterine contractions. Epinephrine Injection can be utilized to prolong the action of anesthetics used in local and regional anesthesia.

Addition of epinephrine to local anesthetics for injection of certain areas (e.g., fingers, toes, ears, etc.) is contraindicated because of danger that vasoconstriction may result in sloughing of tissue.

Except as diluted for admixture with local anesthetics to reduce absorption and prolong action, epinephrine should not ordinarily be used in those cases where vasopressor drugs may be contraindicated, e.g., in thyrotoxicosis, diabetes, in obstetrics when maternal blood pressure is in excess of 130/80 and in hypertension and other cardiovascular disorders.

Epinephrine Injection, USP is subject to oxidation and should be protected against exposure to light and stored in light-resistant containers.

Epinephrine is the preferred treatment for serious allergic or other emergency situations even though this product contains sodium metabisulfite, a sulfite that may in other products cause allergic-type reactions including anaphylactic symptoms or life-threatening or less severe asthmatic episodes in certain susceptible persons. The alternatives to using epinephrine in a life-threatening situation may not be satisfactory. The presence of a sulfite in this product should not deter administration of the drug for treatment of serious allergic or other emergency situations.

Do not use the Injection if its color is pinkish or darker than slightly yellow or if it contains a precipitate.

Do not administer unless solution is clear and container is intact. Discard unused portion.

Epinephrine should not be administered concomitantly with other sympathomimetic drugs (such as isoproterenol) because of possible additive effects and increased toxicity. Combined effects may induce serious cardiac arrhythmias. They may be administered alternately when the preceding effect of other such drugs has subsided.

Administration of epinephrine to patients receiving cyclopropane or halogenated hydrocarbon general anesthetics such as halothane which sensitize the myocardium, may induce cardiac arrhythmia. (See CONTRAINDICATIONS.) When encountered, such arrhythmias may respond to administration of a beta-adrenergic blocking drug. Epinephrine also should be used cautiously with other drugs (e.g., digitalis glycosides) that sensitize the myocardium to the actions of sympathomimetic agents.

Diuretic agents may decrease vascular response to pressor drugs such as epinephrine.

Labor and Delivery. Parenteral administration of epinephrine if used to support blood pressure during low or other spinal anesthesia for delivery can cause acceleration of fetal heart rate and should not be used in obstetrics when maternal blood pressure exceeds 130/80. (See CONTRAINDICATIONS.)

Transient and minor side effects of anxiety, headache, fear and palpitations occur only with systemic therapeutic doses, especially in hyperthyroid individuals. Adverse effects such as cardiac arrhythmias and excessive rise in blood pressure may occur with systemic therapeutic doses or with inadvertent overdosage. Other adverse reactions include cerebral hemorrhage, hemiplegia, subarachnoid hemorrhage, anginal pain in patients with angina pectoris, anxiety, restlessness, headache, tremor, weakness, dizziness, pallor and respiratory difficulty. Such reactions are unlikely when epinephrine is diluted to 1:200,000 (0.005 mg/mL) for injection with local anesthetic agents.

Subcutaneously or intramuscularly — 0.2 to 1 mL (mg). Start with a small dose and increase if required.

For bronchial asthma and certain allergic manifestations, e.g., angioedema, urticaria, serum sickness, anaphylactic shock, use epinephrine subcutaneously. The adult intravenous dose for hypersensitivity reactions or to relieve bronchospasm usually ranges from 0.1 to 0.25 mg injected slowly. Neonates may be given a dose of 0.01 mg per kg of body weight; for the infant 0.05 mg is an adequate initial dose and this may be repeated at 20 to 30 minute intervals in the management of asthma attacks.

A dose of 0.5 mL (0.5 mg) diluted to 10 mL with sodium chloride injection can be administered intravenously or intracardially to restore myocardial contractility.

Intracardiac injection should only be administered by personnel well trained in the technique, if there has not been sufficient time to establish an intravenous route.

External cardiac massage should follow intracardial administration to permit the drug to enter coronary circulation. The drug should be used secondarily to unsuccessful attempts with physical or electromechanical methods.

Ophthalmologic use (for producing conjunctival decongestion, to control hemorrhage, produce mydriasis and reduce intraocular pressure) — use a concentration of 0.1 mg/mL to 1 mg/mL.

A final concentration of 1:200,000 (0.005 mg/mL) of epinephrine injection is recommended for infiltration injection, nerve block, caudal or other epidural blocks. From 0.3 to 0.4 mg of epinephrine (0.3 to 0.4 mL of 1 mg/mL solution) may be mixed with spinal anesthetic agents.

Parenteral drug products should be inspected visually for particulate matter and discoloration prior to administration. (See PRECAUTIONS.) 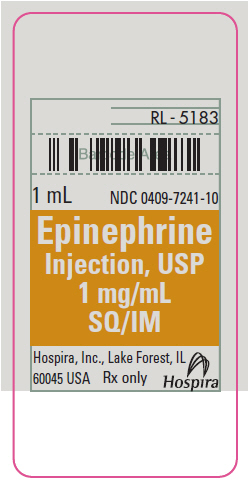 Protect from light. Keep ampuls in carton until time of use.
Each mL contains epinephrine 1 mg; sodium chloride 9 mg; sodium
metabisulfite added as antioxidant 0.9 mg. May contain hydrochloric acid
for pH adjustment. Contains no bacteriostat or antimicrobial agent. Usual
dosage: See insert. Do not use the injection if its color is pinkish or darker
than slightly yellow or if it contains a precipitate. Store at 20 to 25°C (68 to
77°F). [See USP Controlled Room Temperature.]