Etomidate injection is a sterile, nonpyrogenic solution. Each milliliter contains etomidate, USP, 2 mg, propylene glycol 35% v/v. The pH is 6.0 (4.0 to 7.0). It is intended for the induction of general anesthesia by intravenous injection.

The drug etomidate is chemically identified as (R)-(+)-ethyl-1-(1-phenylethyl)-1H-imidazole-5-carboxylate and has the following structural formula: 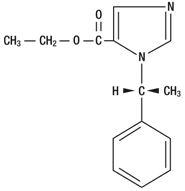 Etomidate is a hypnotic drug without analgesic activity. Intravenous injection of etomidate produces hypnosis characterized by a rapid onset of action, usually within one minute. Duration of hypnosis is dose dependent but relatively brief, usually three to five minutes when an average dose of 0.3 mg/kg is employed. Immediate recovery from anesthesia (as assessed by awakening time, time needed to follow simple commands and time to perform simple tests after anesthesia as well as they were performed before anesthesia), based upon data derived from short operative procedures where intravenous etomidate was used for both induction and maintenance of anesthesia, is about as rapid as, or slightly faster than, immediate recovery after similar use of thiopental. These same data revealed that the immediate recovery period will usually be shortened in adult patients by the intravenous administration of approximately 0.1 mg of intravenous fentanyl, one or two minutes before induction of anesthesia, probably because less etomidate is generally required under these circumstances (consult the package insert for fentanyl before using).

The most characteristic effect of intravenous etomidate on the respiratory system is a slight elevation in arterial carbon dioxide tension (PaCO2). See also ADVERSE REACTIONS.

Reduced cortisol plasma levels have been reported with induction doses of 0.3 mg/kg etomidate. These persist for approximately 6 to 8 hours and appear to be unresponsive to ACTH administration.

The intravenous administration of up to 0.6 mg/kg of etomidate to patients with severe cardiovascular disease has little or no effect on myocardial metabolism, cardiac output, peripheral circulation or pulmonary circulation. The hemodynamic effects of etomidate have in most cases been qualitatively similar to those of thiopental sodium, except that the heart rate tended to increase by a moderate amount following administration of thiopental under conditions where there was little or no change in heart rate following administration of etomidate. However, clinical data indicates that etomidate administration in geriatric patients, particularly those with hypertension, may result in decreases in heart rate, cardiac index, and mean arterial blood pressure. There are insufficient data concerning use of etomidate in patients with recent severe trauma or hypovolemia to predict cardiovascular response under such circumstances.

Clinical experience and special studies to date suggest that standard doses of intravenous etomidate ordinarily neither elevate plasma histamine nor cause signs of histamine release.

Etomidate is rapidly metabolized in the liver. Minimal hypnotic plasma levels of unchanged drug are equal to or higher than 0.23 mcg/mL; they decrease rapidly up to 30 minutes following injection and thereafter more slowly with a half-life value of about 75 minutes. Approximately 75% of the administered dose is excreted in the urine during the first day after injection. The chief metabolite is R-(+)-1-(1-phenylethyl)-1H-imidazole-5-carboxylic acid, resulting from hydrolysis of etomidate, and accounts for about 80% of the urinary excretion. Limited pharmacokinetic data in patients with cirrhosis and esophageal varices suggest that the volume of distribution and elimination half-life of etomidate are approximately double that seen in healthy subjects.

Reduced plasma cortisol and aldosterone levels have been reported following induction doses of etomidate. These results persist for approximately 6-8 hours and appear to be unresponsive to ACTH stimulation. This probably represents blockage of 11 beta-hydroxylation within the adrenal cortex.

Etomidate injection is indicated by intravenous injection for the induction of general anesthesia. When considering use of etomidate, the usefulness of its hemodynamic properties (see CLINICAL PHARMACOLOGY) should be weighed against the high frequency of transient skeletal muscle movements (see ADVERSE REACTIONS).

Intravenous etomidate is also indicated for the supplementation of subpotent anesthetic agents, such as nitrous oxide in oxygen, during maintenance of anesthesia for short operative procedures such as dilation and curettage or cervical conization.

Etomidate is contraindicated in patients who have shown hypersensitivity to it.

INTRAVENOUS ETOMIDATE SHOULD BE ADMINISTERED ONLY BY PERSONS TRAINED IN THE ADMINISTRATION OF GENERAL ANESTHETICS AND IN THE MANAGEMENT OF COMPLICATIONS ENCOUNTERED DURING THE CONDUCT OF GENERAL ANESTHESIA. BECAUSE OF THE HAZARDS OF PROLONGED SUPPRESSION OF ENDOGENOUS CORTISOL AND ALDOSTERONE PRODUCTION, THIS FORMULATION IS NOT INTENDED FOR ADMINISTRATION BY PROLONGED INFUSION.

Do not administer unless solution is clear and container is undamaged. Discard unused portion (see DOSAGE AND ADMINISTRATION).

No carcinogenesis or mutagenesis studies have been carried out on etomidate. The results of reproduction studies showed no impairment of fertility in male and female rats when etomidate was given prior to pregnancy at 0.31, 1.25 and 5 mg/kg (approximately 1X, 4X and 16X human dosage).

There are insufficient data to support use of intravenous etomidate in obstetrics, including Caesarean section deliveries. Therefore, such use is not recommended.

There are inadequate data to make dosage recommendations for induction of anesthesia in patients below the age of ten (10) years; therefore, such use is not recommended (see also DOSAGE AND ADMINISTRATION).

Elderly patients may require lower doses of etomidate than younger patients. Age-related differences in phamacokinetic parameters have been observed in clinical studies (see CLINICAL PHARMACOLOGY and DOSAGE AND ADMINISTRATION).

This drug is known to be substantially excreted by the kidney, and the risk of toxic reactions to this drug may be greater in patients with impaired renal function.

Because elderly patients are more likely to have decreased renal function, care should be taken in dose selection and it may be useful to monitor renal function.

Induction doses of etomidate have been associated with reduction in plasma cortisol and aldosterone concentrations (see CLINICAL PHARMACOLOGY). These have not been associated with changes in vital signs or evidence of increased mortality; however, where concern exists for patients undergoing severe stress, exogenous replacement should be considered.

The most frequent adverse reactions associated with use of intravenous etomidate are transient venous pain on injection and transient skeletal muscle movements, including myoclonus:

1.
Transient venous pain was observed immediately following intravenous injection of etomidate in about 20% of the patients, with considerable difference in the reported incidence (1.2% to 42%). This pain is usually described as mild to moderate in severity but it is occasionally judged disturbing. The observation of venous pain is not associated with a more than usual incidence of thrombosis or thrombophlebitis at the injection site. Pain also appears to be less frequently noted when larger, more proximal arm veins are employed and it appears to be more frequently noted when smaller, more distal, hand or wrist veins are employed.

1.
Most movements are bilateral. The arms, legs, shoulders, neck, chest wall, trunk and all four extremities have been described in some cases, with one or more of these muscle groups predominating in each individual case. Results of electroencephalographic studies suggest that these muscle movements are a manifestation of disinhibition of cortical activity; cortical electroencephalograms, taken during periods when these muscle movements were observed, have failed to reveal seizure activity.
2.
Other movements are described as either unilateral or having a predominance of activity of one side over the other. These movements sometimes resemble a localized response to some stimuli, such as venous pain on injection, in the lightly anesthetized patient (averting movements). Any muscle group or groups may be involved, but a predominance of movement of the arm in which the intravenous infusion is started is frequently noted.
3.
Still other movements probably represent a mixture of the first two types. Skeletal muscle movements appear to be more frequent in patients who also manifest venous pain on injection.

Hyperventilation, hypoventilation, apnea of short duration (5 to 90 seconds with spontaneous recovery); laryngospasm, hiccup and snoring suggestive of partial upper airway obstruction have been observed in some patients. These conditions were managed by conventional countermeasures.

Hypertension, hypotension, tachycardia, bradycardia and other arrhythmias have occasionally been observed during induction and maintenance of anesthesia. One case of severe hypotension and tachycardia, judged to be anaphylactoid in character, has been reported.

Geriatric patients, particularly those with hypertension, may be at increased risk for the development of cardiac depression following etomidate administration (see CLINICAL PHARMACOLOGY).

Postoperative nausea and/or vomiting following induction of anesthesia with etomidate is probably no more frequent than the general incidence. When etomidate was used for both induction and maintenance of anesthesia in short procedures such as dilation and curettage, or when insufficient analgesia was provided, the incidence of postoperative nausea and/or vomiting was higher than that noted in control patients who received thiopental.

Overdosage may occur from too rapid or repeated injections. Too rapid injection may be followed by a fall in blood pressure. No adverse cardiovascular or respiratory effects attributable to etomidate overdose have been reported.

In the event of suspected or apparent overdosage, the drug should be discontinued, a patent airway established (intubate, if necessary) or maintained and oxygen administered with assisted ventilation, if necessary.

The LD50 of etomidate administered intravenously to rats is 20.4 mg/kg.

Etomidate injection is intended for administration only by the intravenous route (see CLINICAL PHARMACOLOGY). The dose for induction of anesthesia in adult patients and in pediatric patients above the age of ten (10) years will vary between 0.2 and 0.6 mg/kg of body weight, and it must be individualized in each case. The usual dose for induction in these patients is 0.3 mg/kg, injected over a period of 30 to 60 seconds. There are inadequate data to make dosage recommendations for induction of anesthesia in patients below the age of ten (10) years; therefore, such use is not recommended. Geriatric patients may require reduced doses of etomidate.

Smaller increments of intravenous etomidate may be administered to adult patients during short operative procedures to supplement subpotent anesthetic agents, such as nitrous oxide. The dosage employed under these circumstances, although usually smaller than the original induction dose, must be individualized. There are insufficient data to support this use of etomidate for longer adult procedures or for any procedures in pediatric patients; therefore, such use is not recommended. The use of intravenous fentanyl and other neuroactive drugs employed during the conduct of anesthesia may alter the etomidate dosage requirements. Consult the prescribing information for all other such drugs before using.

Etomidate injection is compatible with commonly administered pre-anesthetic medications, which may be employed as indicated. See also CLINICAL PHARMACOLOGY, ADVERSE REACTIONS, and dosage recommendations for maintenance of anesthesia.

Etomidate hypnosis does not significantly alter the usual dosage requirements of neuromuscular blocking agents employed for endotracheal intubation or other purposes shortly after induction of anesthesia.

Parenteral drug products should be inspected visually for particulate matter and discoloration prior to administration, whenever solution and container permit. To prevent needle-stick injuries, needles should not be recapped, purposely bent, or broken by hand. 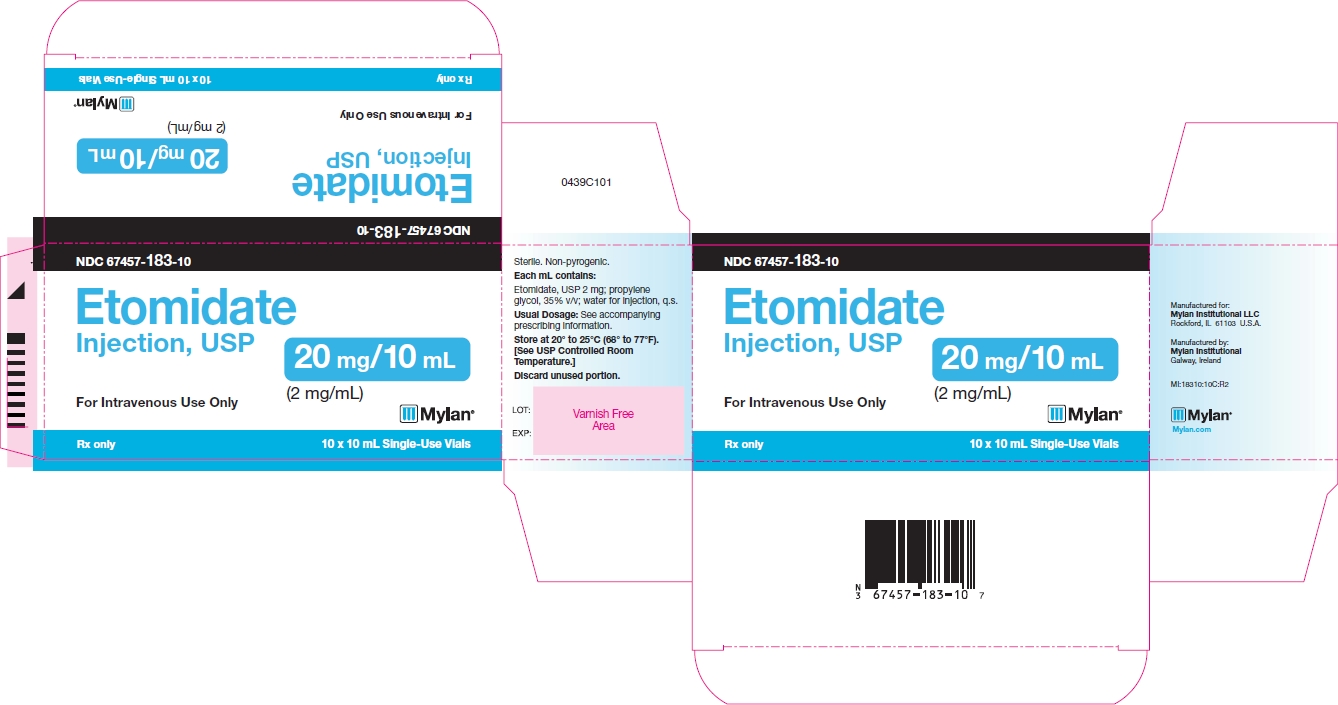 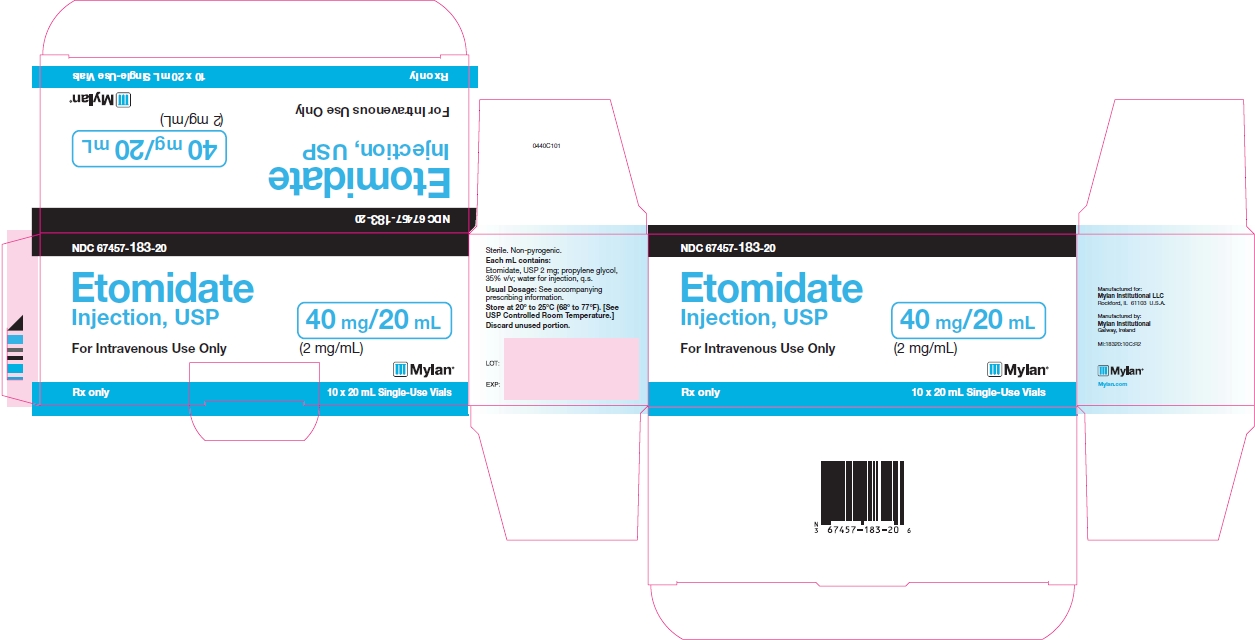