Cyproheptadine HCl USP, is an antihistaminic and antiserotonergic agent. Cyproheptadine hydrochloride USP is a white to slightly yellowish crystalline solid, with a molecular weight of 350.89, which is soluble in water, freely soluble in methanol, sparingly soluble in ethanol, soluble in chloroform, and practically insoluble in ether. It is the sesquihydrate of 4-(5H-dibenzo[a,d] cyclohepten-5-ylidene)-1-methylpiperidine hydrochloride. The molecular formula of the anhydrous salt is C21H21N•HCl and the structural formula of the anhydrous salt is: 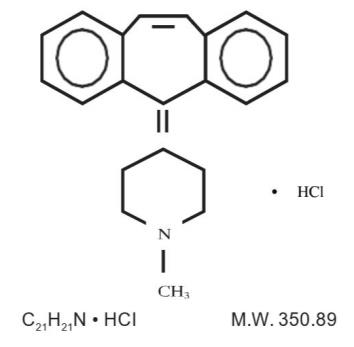 Patients should be warned about engaging in activities requiring mental alertness and motor coordination, such as driving a car or operating machinery. Antihistamines are more likely to cause dizziness, sedation, and hypotension in elderly patients (see PRECAUTIONS, Geriatric Use).

Long-term carcinogenic studies have not been done with cyproheptadine. Cyproheptadine had no effect on fertility in a two-litter study in rats or a two generation study in mice at about 10 times the human dose. Cyproheptadine did not produce chromosome damage in human lymphocytes or fibroblasts invitro; high doses (10-4M) were cytotoxic. Cyproheptadine did not have any mutagenic effect in the Ames microbial mutagen test; concentrations of above 500 mcg/ plate inhibited bacterial growth.

The total daily dose for adults should not exceed 0.5 mg/kg/day. The therapeutic range is 4 mg to 20 mg a day, with the majority of patients requiring 12 mg to 16 mg a day. An occasional patient may require as much as 32 mg a day for adequate relief. It is suggested that dosage be initiated with 4 mg (1 tablet) three times a day and adjusted according to the size and response of the patient.

Cyproheptadine Hydrochloride Tablets USP, 4 mg are available as white to off- white, round, flat-faced, beveled-edged tablets, debossed “4” on left side, “9” on right side of the scoring on one side and plain on the other side, containing 4 mg of cyproheptadine HCl packaged in bottles of 100 (NDC 50488-5002-1) and 1000 (NDC 50488-5002-2) tablets. Tablets have functional scoring.