Ifosfamide injection should be administered under the supervision of a qualified physician experienced in the use of cancer chemotherapeutic agents. Urotoxic side effects, especially hemorrhagic cystitis, as well as CNS toxicities such as confusion and coma have been associated with the use of ifosfamide. When they occur, they may require cessation of ifosfamide therapy. Severe myelosuppression has been reported. (See ADVERSE REACTIONS section).

Ifosfamide is a white crystalline powder that is soluble in water.

In vitro incubation of DNA with activated ifosfamide has produced phosphotriesters. The treatment of intact cell nuclei may also result in the formation of DNA-DNA cross-links. DNA repair most likely occurs in G-1 and G-2 stage cells.

Ifosfamide exhibits dose-dependent pharmacokinetics in humans. At single doses of 3.8–5.0 g/m2, the plasma concentrations decay biphasically and the mean terminal elimination half–life is about 15 hours. At doses of 1.6–2.4 g/m2/day, the plasma decay is monoexponential and the terminal elimination half-life is about 7 hours. Ifosfamide is extensively metabolized in humans and the metabolic pathways appear to be saturated at high doses.

A study of 20 patients between 40 to 71 years of age receiving 1.5 g/m2 of ifosfamide daily for 3 or 5 days indicated that elimination half-life appears to increase with age. The elimination half-life increase appeared to be related to the increase in ifosfamide volume of distribution with age. No significant changes in total plasma clearance or renal clearance with age were reported.

In a study at Indiana University, 50 fully evaluable patients with germ cell testicular cancer were treated with ifosfamide in combination with cisplatin and either vinblastine or etoposide after failing (47 of 50 patients) at least two prior chemotherapy regimens consisting of cisplatin/ vinblastine / bleomycin, (PVB), cisplatin/vinblastine/ actinomycin D/bleomycin/cyclophosphamide, (VAB6), or the combination of cisplatin and etoposide. Patients were selected for remaining cisplatin sensitivity because they had previously responded to a cisplatin containing regimen and had not progressed while on the cisplatin containing regimen or within 3 weeks of stopping it. Patients served as their own control based on the premise that long term complete responses could not be achieved by retreatment with a regimen to which they had previously responded and subsequently relapsed.

Urotoxic side effects, especially hemorrhagic cystitis, have been frequently associated with the use of ifosfamide. It is recommended that a urinalysis should be obtained prior to each dose of ifosfamide. If microscopic hematuria (greater than 10 RBCs per high power field), is present, then subsequent administration should be withheld until complete resolution.

Further administration of ifosfamide should be given with vigorous oral or parenteral hydration.

When ifosfamide is given in combination with other chemotherapeutic agents, severe myelosuppression is frequently observed. Close hematologic monitoring is recommended. White blood cell (WBC) count, platelet count and hemoglobin should be obtained prior to each administration and at appropriate intervals. Unless clinically essential, ifosfamide should not be given to patients with a WBC count below 2000/μL and/or a platelet count below 50,000/μL.

Neurologic manifestations consisting of somnolence, confusion, hallucinations and in some instances, coma, have been reported following ifosfamide therapy. The occurrence of these symptoms requires discontinuing ifosfamide therapy. The symptoms have usually been reversible and supportive therapy should be maintained until their complete resolution.

Animal studies indicate that the drug is capable of causing gene mutations and chromosomal damage in vivo. Embryotoxic and teratogenic effects have been observed in mice, rats and rabbits at doses 0.05 to 0.075 times the human dose.

Ifosfamide can cause fetal damage when administered to a pregnant woman. If ifosfamide is used during pregnancy, or if the patient becomes pregnant while taking this drug, the patient should be apprised of the potential hazard to the fetus.

Ifosfamide should be given cautiously to patients with impaired renal function as well as to those with compromised bone marrow reserve, as indicated by: leukopenia, granulocytopenia, extensive bone marrow metastases, prior radiation therapy, or prior therapy with other cytotoxic agents.

During treatment, the patient's hematologic profile (particularly neutrophils and platelets) should be monitored regularly to determine the degree of hematopoietic suppression. Urine should also be examined regularly for red cells which may precede hemorrhagic cystitis.

The physician should be alert for possible combined drug actions, desirable or undesirable, involving ifosfamide even though ifosfamide has been used successfully concurrently with other drugs, including other cytotoxic drugs.

Ifosfamide is excreted in breast milk. Because of the potential for serious adverse events and the tumorigenicity shown for ifosfamide in animal studies, a decision should be made whether to discontinue nursing or to discontinue the drug, taking into account the importance of the drug to the mother.

Ifosfamide has been shown to be carcinogenic in rats, with female rats showing a significant incidence of leiomyosarcomas and mammary fibroadenomas.

The mutagenic potential of ifosfamide has been documented in bacterial systems in vitro and mammalian cells in vivo. In vivo, ifosfamide has induced mutagenic effects in mice and Drosophila melanogaster germ cells, and has induced a significant increase in dominant lethal mutations in male mice as well as recessive sex-linked lethal mutations in Drosophila.

In pregnant mice, resorptions increased and anomalies were present at day 19 after a 30 mg/m2 dose of ifosfamide was administered on day 11 of gestation. Embryolethal effects were observed in rats following the administration of 54 mg/m2 doses of ifosfamide from the 6th through the 15th day of gestation and embryotoxic effects were apparent after dams received 18 mg/m2 doses over the same dosing period. Ifosfamide is embryotoxic to rabbits receiving 88 mg/m2/day doses from the 6th through the 18th day after mating. The number of anomalies was also significantly increased over the control group.

Clinical studies of IFEX for the treatment of testicular cancer did not include elderly subjects. Other reported clinical experience in a variety of tumor types has not identified differences in responses between elderly and younger patients. In general, dose selection for an elderly patient should be cautious, reflecting the greater frequency of decreased hepatic, renal, or cardiac function, and of concomitant disease or other drug therapy.

A study of patients 40 to 71 years of age indicated that elimination half-life appears to increase with advancing age (see CLINICAL PHARMACOLOGY  section). This apparent increase in half-life appeared to be related to increases in volume of distribution of ifosfamide with age. No significant changes in total plasma clearance or renal or non-renal clearance with age were reported.

Ifosfamide and its metabolites are known to be substantially excreted by the kidney, and the risk of toxic reactions to this drug may be greater in patients with impaired renal function.

Because elderly patients are more likely to have decreased renal function, care should be taken in dose selection, and it may be useful to monitor renal function.

In patients receiving ifosfamide as a single agent, the dose-limiting toxicities are myelosuppression and urotoxicity. Dose fractionation, vigorous hydration, and a protector such as mesna can significantly reduce the incidence of hematuria, especially gross hematuria, associated with hemorrhagic cystitis. At a dose of 1.2 g/m2 daily for 5 consecutive days, leukopenia, when it occurs, is usually mild to moderate. Other significant side effects include alopecia, nausea, vomiting, and central nervous system toxicities.

Myelosuppression was dose related and dose limiting. It consisted mainly of leukopenia and, to a lesser extent, thrombocytopenia. A WBC count <3000/μL is expected in 50% of the patients treated with ifosfamide single agent at doses of 1.2 g/m2 per day for 5 consecutive days. At this dose level, thrombocytopenia (platelets <100,000/μL) occurred in about 20% of the patients. At higher dosages, leukopenia was almost universal, and at total dosages of 10–12 g/m2/cycle, one half of the patients had a WBC count below 1000/μL and 8% of patients had platelet counts less than 50,000/μL. Myelosuppression was usually reversible and treatment can be given every 3 to 4 weeks.

When ifosfamide is used in combination with other myelosuppressive agents, adjustments in dosing may be necessary. Patients who experience severe myelosuppression are potentially at increased risk for infection. Anemia has been reported as part of postmarketing surveillance.

Nausea and vomiting occurred in 58% of the patients who received ifosfamide. They were usually controlled by standard antiemetic therapy. Other gastrointestinal side effects include anorexia, diarrhea, and in some cases, constipation.

Urotoxicity consisted of hemorrhagic cystitis, dysuria, urinary frequency and other symptoms of bladder irritation. Hematuria occurred in 6% to 92% of patients treated with ifosfamide. The incidence and severity of hematuria can be significantly reduced by using vigorous hydration, a fractionated dose schedule and a protector such as mesna. At daily doses of 1.2 g/m2 for 5 consecutive days without a protector, microscopic hematuria is expected in about one half of the patients and gross hematuria in about 8% of patients.

Renal toxicity occurred in 6% of the patients treated with ifosfamide as a single agent. Clinical signs, such as elevation in BUN or serum creatinine or decrease in creatinine clearance, were usually transient. They were most likely to be related to tubular damage. One episode of renal tubular acidosis which progressed into chronic renal failure was reported. Proteinuria and acidosis also occurred in rare instances. Metabolic acidosis was reported in 31% of patients in one study when ifosfamide was administered at doses of 2.0 to 2.5 g/m2/day for 4 days. Renal tubular acidosis, Fanconi syndrome, renal rickets, and acute renal failure have been reported. Close clinical monitoring of serum and urine chemistries including phosphorus, potassium, alkaline phosphatase and other appropriate laboratory studies is recommended. Appropriate replacement therapy should be administered as indicated.

CNS side effects were observed in 12% of patients treated with ifosfamide. Those most commonly seen were somnolence, confusion, depressive psychosis, and hallucinations. Other less frequent symptoms include dizziness, disorientation, and cranial nerve dysfunction. Seizures and coma with death were occasionally reported. The incidence of CNS toxicity may be higher in patients with altered renal function.

Alopecia occurred in approximately 83% of the patients treated with ifosfamide as a single agent. In combination, this incidence may be as high as 100%, depending on the other agents included in the chemotherapy regimen. Increases in liver enzymes and/or bilirubin were noted in 3% of the patients. Other less frequent side effects included phlebitis, pulmonary symptoms, fever of unknown origin, allergic reactions, stomatitis, cardiotoxicity, and polyneuropathy.

No specific antidote for ifosfamide is known. Management of overdosage would include general supportive measures to sustain the patient through any period of toxicity that might occur.

Ifosfamide injection should be administered intravenously at a dose of 1.2 g/m2 per day for 5 consecutive days. Treatment is repeated every 3 weeks or after recovery from hematologic toxicity (Platelets ≥ 100,000/μL, WBC ≥ 4,000/μL). In order to prevent bladder toxicity, ifosfamide should be given with extensive hydration consisting of at least 2 liters of oral or intravenous fluid per day. A protector, such as mesna, should also be used to reduce the incidence of hemorrhagic cystitis. Ifosfamide should be administered as a slow intravenous infusion lasting a minimum of 30 minutes. Although ifosfamide has been administered to a small number of patients with compromised hepatic and/or renal function, studies to establish optimal dose schedules of ifosfamide in such patients have not been conducted.

Ifosfamide injection may be diluted to achieve concentrations of 0.6 to 20 mg/mL in the following fluids:

Further diluted solutions of ifosfamide should be refrigerated and used within 24 hours.

Ifosfamide Injection is available as follows:

Caution should be exercised when handling ifosfamide injection. Procedures for proper handling and disposal of anticancer drugs should be considered. Several guidelines on this subject have been published.1-4 Skin reactions associated with accidental exposure to ifosfamide may occur. To minimize the risk of dermal exposure, always wear impervious gloves when handling vials and solutions containing ifosfamide. If ifosfamide solution contacts the skin or mucosa, immediately wash the skin thoroughly with soap and water or rinse the mucosa with copious amounts of water. 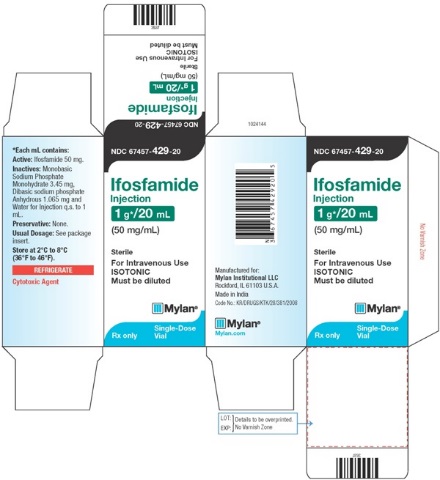 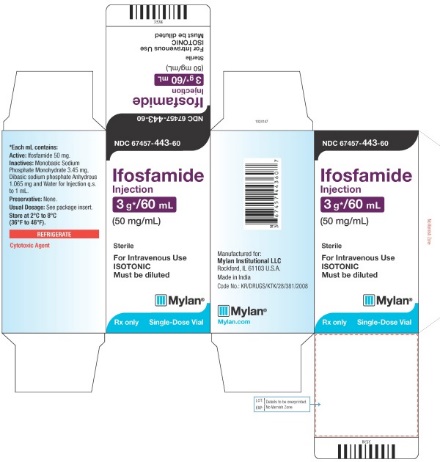