Meprobamate is a carbamate derivative which has been shown in animal studies to have effects at multiple sites in the central nervous system including the thalamus and limbic system.

Meprobamate tablets are indicated for the management of anxiety disorders or for the short-term relief of the symptoms of anxiety. Anxiety or tension associated with the stress of everyday life usually do not require treatment with an anxiolytic.

The effectiveness of meprobamate tablets in long-term use, that is, more than 4 months, has not been assessed by systematic clinical studies. The physician should periodically reassess the usefulness of the drug for the individual patient.

Acute intermittent porphyria as well as allergic or idiosyncratic reactions to meprobamate or related compounds such as carisoprodol, mebutamate, tybamate, or carbromal.


Drug Dependence
Physical dependence, psychological dependence, and abuse have occurred. When chronic intoxication from prolonged use occurs, it usually involves ingestion of greater than recommended doses and is manifested by ataxia, slurred speech, and vertigo.

Therefore, careful supervision of dose and amounts prescribed is advised, as well as avoidance of prolonged administration, especially for alcoholics and other patients with a known propensity for taking excessive quantities of drugs.

Sudden withdrawal of the drug after prolonged and excessive use may precipitate recurrence of pre-existing symptoms such as anxiety, anorexia, insomnia, or withdrawal reactions such as vomiting, ataxia, tremors, muscle twitching, confusional states, hallucinosis, and rarely, convulsive seizures. Such seizures are more likely to occur in persons with central nervous system damage or pre-existent or latent convulsive disorders. Onset of withdrawal symptoms occurs usually within 12 to 48 hours after discontinuation of meprobamate; symptoms usually cease within the next 12 to 48 hours.

When excessive dosage has continued for weeks or months, dosage should be reduced gradually over a period of one or two weeks rather than abruptly stopped. Alternatively, a long-acting barbiturate may be substituted, then gradually withdrawn.

Patients should be warned that meprobamate may impair the mental and/or physical abilities required for performance of potentially hazardous tasks such as driving or operating machinery.

Since the effects of meprobamate and alcohol or meprobamate and other CNS depressants or psychotropic drugs may be additive, appropriate caution should be exercised with patients who take more than one of these agents simultaneously.

Usage in Pregnancy and Lactation

An increased risk of congenital malformations associated with the use of minor tranquilizers (meprobamate, chlordiazepoxide and diazepam) during the first trimester of pregnancy has been suggested in several studies. Because use of these drugs is rarely a matter of urgency, their use during this period should almost always be avoided. The possibility that a woman of childbearing potential may be pregnant at the time of institution of therapy should be considered. Patients should be advised that if they become pregnant during therapy or intend to become pregnant they should communicate with their physician about the desirability of discontinuing the drug.

Meprobamate tablets should not be administered to children under age six, since there is a lack of documented evidence for safety and effectiveness in this age group.

The lowest effective dose should be administered, particularly to elderly and/or debilitated patients, in order to preclude oversedation.

The possibility of suicide attempts should be considered and the least amount of drug feasible should be dispensed at any one time.

Meprobamate is metabolized in the liver and excreted by the kidney; to avoid its excess accumulation, caution should be exercised in administration to patients with compromised liver or kidney function.

Clinical studies of meprobamate tablets did not include sufficient numbers of subjects aged 65 and over to determine whether they respond differently from younger subjects. Other reported clinical experience has not identified differences in responses between the elderly and younger patients. In general, dose selection for an elderly patient should be cautious, usually starting at the low end of the dosing range, reflecting the greater frequency of decreased hepatic, renal, or cardiac function, and of concomitant disease or other drug therapy.

Allergic or Idiosyncratic
Allergic or idiosyncratic reactions are usually seen within the period of the first to fourth dose in patients having had no previous contact with the drug. Milder
reactions are characterized by an itchy, urticarial, or erythematous maculopapular rash which may be generalized or confined to the groin. Other reactions have
included leukopenia, acute nonthrombocytopenic purpura, petechiae, ecchymoses, eosinophilia, peripheral edema, adenopathy, fever, fixed drug eruption with cross
reaction to carisoprodol, and cross sensitivity between meprobamate/mebutamate and meprobamate/carbromal.

In case of allergic or idiosyncratic reactions to meprobamate, discontinue the drug and initiate appropriate symptomatic therapy, which may include epinephrine,
antihistamines, and in severe cases, corticosteroids. In evaluating possible allergic reactions, also consider allergy to excipients.

Other
Exacerbation of porphyric symptoms.


Suicidal attempts with meprobamate have resulted in drowsiness, lethargy, stupor, ataxia, coma, shock, vasomotor, and respiratory collapse. Some suicidal attempts have been fatal.

The following data on meprobamate tablets have been reported in the literature and from other sources. These data are not expected to correlate with each case (considering factors such as individual susceptibility and length of time from ingestion to treatment), but represent the usual ranges reported.

Acute simple overdose  (meprobamate alone): Death has been reported with ingestion of as little as 12 g meprobamate and survival with as much as 40 g.

0.5-2 mg% represents the usual blood level range of meprobamate after therapeutic doses. The level may occasionally be as high as 3 mg%.

3-10 mg% usually corresponds to findings of mild to moderate symptoms of overdosage, such as stupor or light coma.

At levels greater than 20 mg%, more fatalities than survivals can be expected.

Acute combined overdose (meprobamate with alcohol or other CNS depressants or psychotropic drugs): Since effects can be additive, a history of ingestion of a low dose of meprobamate plus any of these compounds (or of a relative low blood or tissue level) cannot be used as a prognostic indicator.

In cases where excessive doses have been taken, sleep ensues rapidly and blood pressure, pulse, and respiratory rates are reduced to basal levels. Any drug remaining in the stomach should be removed and symptomatic therapy given. Should respiration or blood pressure become compromised, respiratory assistance, central nervous system stimulants, and pressor agents should be administered cautiously as indicated. Meprobamate is metabolized in the liver and excreted by the kidney. Diuresis, osmotic (mannitol) diuresis, peritoneal dialysis, and hemodialysis have been used successfully. Careful monitoring of urinary output is necessary and caution should be taken to avoid overhydration. Relapse and death, after initial recovery, have been attributed to incomplete gastric emptying and delayed absorption. Meprobamate can be measured in biological fluids by two methods: colorimetric (Hoffman, A.J. and Ludwig, B.J.: J Amer Pharm Assn 48: 740, 1959) and gas chromatographic (Douglas, J.F. et al: Anal Chem 39: 956, 1967).

Not recommended for children under age 6 (see Usage in Children).


Meprobamate Tablets USP 200 mg are white to off white, round, biconvex, uncoated tablets debossed with “L125” on one side and break line on other side.

Meprobamate Tablets USP 400 mg are white to off white, round, biconvex, uncoated tablets debossed with “L105” on one side and break line on other side. 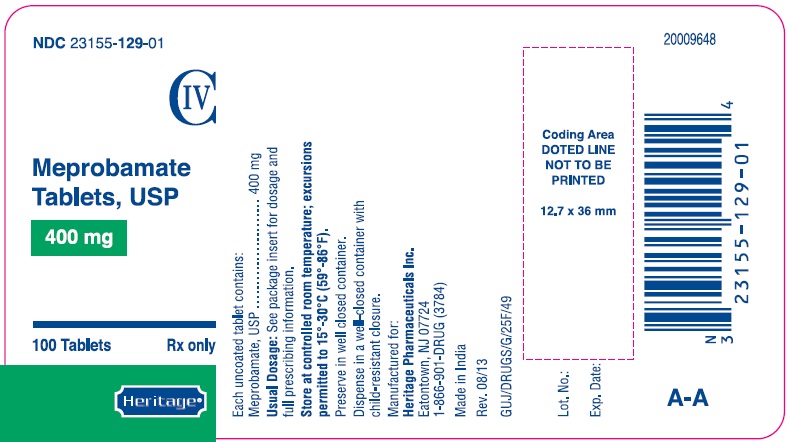