Cases of intestinal necrosis, which may be fatal, and other serious gastrointestinal adverse events (bleeding, ischemic colitis, perforation) have been reported in association with sodium polystyrene sulfonate use. The majority of these cases reported the concomitant use of sorbitol. Risk factors for gastrointestinal adverse events were present in many of the cases including prematurity, history of intestinal disease or surgery, hypovolemia, and renal insufficiency and failure. Concomitant administration of sorbitol is not recommended (see PRECAUTIONS, Drug Interactions).

Since effective lowering of serum potassium with sodium polystyrene sulfonate may take hours to days, treatment with this drug alone may be insufficient to rapidly correct severe hyperkalemia associated with states of rapid tissue breakdown (e.g., burns and renal failure) or hyperkalemia so marked as to constitute a medical emergency. Therefore, other definitive measures, including dialysis, should always be considered and may be imperative.

In the event of clinically significant constipation, treatment with sodium polystyrene sulfonate should be discontinued until normal bowel motion is resumed. (see WARNINGS, Intestinal Necrosis).

Concomitant use of Sorbitol with sodium polystyrene sulfonate has been implicated in cases of intestinal necrosis, which may be fatal. Therefore, concomitant administration is not recommended. (See WARNINGS.)

Overdosage may result in electrolyte disturbances including hypokalemia, hypocalcemia, and hypomagnesemia. Biochemical disturbances resulting from over-dosage may give rise to clinical signs and symptoms of hypokalemia, including: irritability, confusion, delayed thought processes, muscle weakness, hyporeflexia, which may progress to frank paralysis and/or apnea. Tetany may occur. Electrocardiographic changes may be consistent with hypokalemia or hypercalcemia: cardiac arrhythmias may occur. Appropriate measures should be taken to correct serum electrolytes (potassium, calcium, magnesium), and the resin should be removed from the alimentary tract by appropriate use of laxatives or enemas.

Sodium polystyrene sulfonate should not be heated for to do so may alter the exchange properties of the resin.

The effect must be carefully controlled by frequent serum potassium determinations within
each 24 hour period. Sodium content approximately 60 mEq per 15 g.

Suspension should be freshly prepared and not stored beyond 24 hours.
Dispense in tight, light-resistant containers as defined in the official compendia. 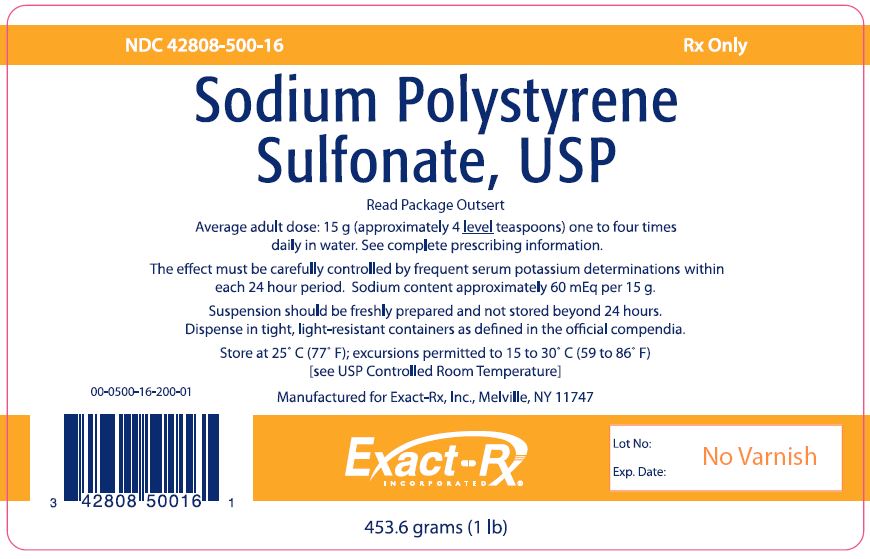