PHYSICIAN LABELING
Next ChoiceTM (Levonorgestrel) Tablets, 0.75 mg
Rx only
for women age 17 and younger
This product is not approved for nonprescription use.

Emergency contraceptives are not effective if the woman is already pregnant. Next ChoiceTM is believed to act as an emergency contraceptive principally by preventing ovulation or fertilization (by altering tubal transport of sperm and/or ova). In addition, they may inhibit implantation (by altering the endometrium). They are not effective once the process of implantation has begun.

No specific investigation of the absolute bioavailability of Next ChoiceTM in humans has been conducted. However, literature indicates that levonorgestrel is rapidly and completely absorbed after oral administration (bioavailability about 100%) and is not subject to first pass metabolism. After a single dose of Next ChoiceTM (0.75 mg) administered to 16 women under fasting conditions, maximum serum concentrations of levonorgestrel are 14.1 ± 7.7 ng/mL (mean ± SD) at an average of 1.6 ± 0.7 hours. No formal study of the effect of food on the absorption of levonorgestrel has been undertaken.

Levonorgestrel in serum is primarily protein bound. Approximately 50% is bound to albumin and 47.5% is bound to sex hormone binding globulin (SHBG).

The elimination half-life of levonorgestrel following single dose administration as Next ChoiceTM (0.75 mg) is 24.4 ± 5.3 hours. Excretion following single dose administration as emergency contraception is unknown, but based on chronic, low-dose contraceptive use, levonorgestrel and its metabolites are primarily excreted in the urine, with smaller amounts recovered in the feces.

This product is not intended for use in geriatric (age 65 years or older) populations and pharmacokinetic data are not available for this population.

This product is not intended for use in pediatric (premenarcheal) populations, and pharmacokinetic data are not available for this population.

No formal studies have evaluated the effect of race. However, clinical trials demonstrated a higher pregnancy rate in the Chinese population with both Next ChoiceTM and the Yuzpe regimen (another form of emergency contraception consisting of two doses of ethinyl estradiol 0.1 mg + levonorgestrel 0.5 mg). The reason for this apparent increase in the pregnancy rate of emergency contraceptives in Chinese women is unknown.

No formal studies of drug-drug interactions were conducted.

Next ChoiceTM is a prescription-only emergency contraceptive, for women age 17 and younger, that can be used to prevent pregnancy following unprotected intercourse or a known or suspected contraceptive failure. This product is not approved for nonprescription use.

To obtain optimal efficacy, the first tablet should be taken as soon as possible within 72 hours of intercourse. The second tablet must be taken 12 hours later.

A double-blind, controlled clinical trial in 1,955 evaluable women compared the efficacy and safety of Next ChoiceTM, (one 0.75 mg tablet of Next levonorgestrel taken within 72 hours of intercourse, and one tablet taken 12 hours later) to the Yuzpe regimen (two tablets of 0.25 mg levonorgestrel and 0.05 mg ethinyl estradiol, taken within 72 hours of intercourse, and two tablets taken 12 hours later). Next ChoiceTM, was at least as effective as the Yuzpe regimen in preventing pregnancy. After a single act of intercourse, the expected pregnancy rate of 8% (with no contraception) was reduced to approximately 1% with Next ChoiceTM.

Emergency contraceptives are not as effective as routine contraception since their failure rate, while low based on a single use, would accumulate over time with repeated use (see  WARNINGS). See Table 2 below.

Progestin-only contraceptive pills (POPs) are used as a routine method of birth control over longer periods of time, and are contraindicated in some conditions. It is not known whether these same conditions apply to the Next ChoiceTM regimen consisting of the emergency use of two progestin pills. POPs however, are not recommended for use in the following conditions:

Menstrual bleeding patterns are often irregular among women using progestin-only oral contraceptives and in clinical studies of levonorgestrel for postcoital and emergency contraceptive use. Some women may experience spotting a few days after taking Next ChoiceTM. At the time of expected menses, approximately 75% of women using Next ChoiceTM had vaginal bleeding similar to their normal menses, 12% to 13% bled more than usual, and 12% bled less than usual. The majority of women (87%) had their next menstrual period at the expected time or within ± 7 days, while 13% had a delay of more than 7 days beyond the anticipated onset of menses. If there is a delay in the onset of menses beyond 1 week, the possibility of pregnancy should be considered.

Many studies have found no effects on fetal development associated with long-term use of contraceptive doses of oral progestins (POPs). The few studies of infant growth and development that have been conducted with POPs have not demonstrated significant adverse effects.

Next ChoiceTM, like progestin-only contraceptives, do not protect against HIV infection (AIDS) and other sexually transmitted diseases.

The effects of Next ChoiceTM on carbohydrate metabolism are unknown. Some users of progestin-only oral contraceptives (POPs) may experience slight deterioration in glucose tolerance, with increases in plasma insulin; however, women with diabetes mellitus who use POPs do not generally experience changes in their insulin requirements. Nonetheless, diabetic women should be monitored while taking Next ChoiceTM.

Theoretically, the effectiveness of low-dose progestin-only pills is reduced by hepatic enzyme-inducing drugs such as the anticonvulsants phenytoin, carbamazepine, and barbiturates, and the antituberculosis drug rifampin. No significant interaction has been found with broad-spectrum antibiotics. It is not known whether the efficacy of Next ChoiceTM would be affected by these or any other medications.

Small amounts of progestin pass into the breast milk in women taking progestinonly pills for long-term contraception resulting in steroid levels in infant plasma of 1% to 6% of the levels of maternal plasma. However, no adverse effects due to progestin-only pills have been found on breastfeeding performance, either in the quality or quantity of the milk, or on the health, growth or development of the infant.

Safety and efficacy of progestin-only pills have been established in women of reproductive age for long-term contraception. Safety and efficacy are expected to be the same for postpubertal adolescents under the age of 16 and for users 16 years and older. Use of Next ChoiceTM emergency contraception before menarche is not indicated.

The most common adverse events in the clinical trial for women receiving Next ChoiceTM included nausea (23%), abdominal pain (18%), fatigue (17%), headache (17%), and menstrual changes. The table below shows those adverse events that occurred in ≥5% of Next ChoiceTM users.

Next ChoiceTM demonstrated a superior safety profile over the Yuzpe regimen for the following adverse events:

There is no information about dependence associated with the use of Next ChoiceTM.

There are no data on overdosage of Next ChoiceTM, although the common adverse event of nausea and its associated vomiting may be anticipated.

The user should be instructed that if she vomits within one hour of taking either dose of medication she should contact her health care professional to discuss whether to repeat that dose.

Next ChoiceTM (levonorgestrel) tablets, 0.75 mg are available for a single course of treatment in PVC/aluminum foil blister packages of two tablets each. Each tablet is peach, round, bevel edged, and flat faced embossed with “475” on one side and “WATSON” on the other side. 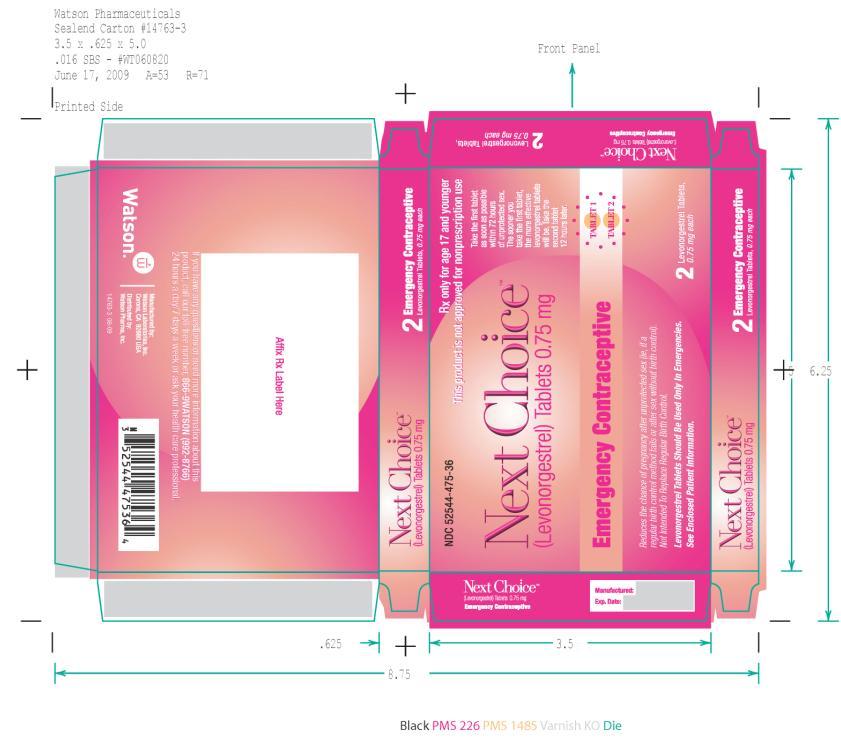