Ampicillin for Injection, USP, the monosodium salt of D(-)-6-(2-amino-2-phenylacetamido)-3,3-dimethyl-7-oxo-4-thia-1-azabicyclo [3.2.0] heptane-2-carboxylate is a sterile synthetic penicillin for intramuscular or intravenous use. It is an antibacterial agent with a broad spectrum of bactericidal activity against both penicillin-susceptible Gram-positive organisms and many common Gram-negative pathogens.

Ampicillin for Injection contains approximately 2.9 milliequivalents of sodium per 1 gram of drug.

Ampicillin diffuses readily into most body tissues and fluids. However, penetration into the cerebrospinal fluid and brain occurs only when the meninges are inflamed. Ampicillin is excreted largely unchanged in the urine and its excretion can be delayed by concurrent administration of probenecid. The active form appears in the bile in higher concentrations than those found in serum. Ampicillin is the least serum-bound of all the penicillins, averaging about 20% compared to approximately 60% to 90% for other penicillins. Ampicillin is well tolerated by most patients and has been given in doses of 2 grams daily for many weeks without adverse reactions.

While in vitro studies have demonstrated the susceptibility of most strains of the following organisms, clinical efficacy for infections other than those included in the INDICATIONS AND USAGE section has not been demonstrated.

To reduce the development of drug-resistant bacteria and maintain the effectiveness of Ampicillin for Injection and other antibacterial drugs, Ampicillin for Injection should be used only to treat or prevent infections that are proven or strongly suspected to be caused by susceptible bacteria. When culture and susceptibility information are available, they should be considered in selecting or modifying antibacterial therapy. In the absence of such data, local epidemiology and susceptibility patterns may contribute to the empiric selection of therapy.

Ampicillin for Injection is indicated in the treatment of infections caused by susceptible strains of the designated organisms in the conditions listed below:

Septicemia and Endocarditis caused by susceptible Gram-positive organisms including Streptococcus sp., penicillin G-susceptible staphylococci, and enterococci. Gram-negative sepsis caused by E. coli, Proteus mirabilis and Salmonella sp. respond to ampicillin. Endocarditis due to enterococcal strains usually respond to intravenous therapy. The addition of an aminoglycoside may enhance the effectiveness of ampicillin when treating streptococcal endocarditis.

Bacteriology studies to determine the causative organisms and their susceptibility to ampicillin should be performed. Therapy may be instituted prior to obtaining results of susceptibility testing.

It is advisable to reserve the parenteral form of this drug for moderately severe and severe infections and for patients who are unable to take the oral forms. A change to oral ampicillin may be made as soon as appropriate.

Indicated surgical procedures should be performed.

A history of a previous hypersensitivity reaction to any of the penicillins is a contraindication.

OXYGEN, INTRAVENOUS STEROIDS, AND AIRWAY MANAGEMENT, INCLUDING INTUBATION, SHOULD ALSO BE ADMINISTERED AS INDICATED.

Clostridium difficile associated diarrhea (CDAD) has been reported with use of nearly all antibacterial agents, including Ampicillin for Injection, and may range in severity from mild diarrhea to fatal colitis. Treatment with antibacterial agents alters the normal flora of the colon leading to overgrowth of C. difficile.

Prescribing Ampicillin for Injection in the absence of a proven or strongly suspected bacterial infection or a prophylactic indication is unlikely to provide benefit to the patient and increases the risk of the development of drug-resistant bacteria.

The possibility of superinfections with mycotic organisms or bacterial pathogens should be kept in mind during therapy. In such cases, discontinue the drug and substitute appropriate treatment.

A high percentage (43 to 100 percent) of patients with infectious mononucleosis who receive ampicillin develop a skin rash. Typically, the rash appears 7 to 10 days after the start of oral ampicillin therapy and remains for a few days to a week after the drug is discontinued. In most cases, the rash is maculopapular, pruritic, and generalized. Therefore, the administration of ampicillin is not recommended in patients with mononucleosis. It is not known whether these patients are truly allergic to ampicillin.

As with any potent drug, periodic assessment of organ system function, including renal, hepatic, and hematopoietic, should be made during prolonged therapy.

Transient elevation of serum transaminase has been observed following administration of ampicillin. The significance of this finding is not known.

With high urine concentrations of ampicillin, false-positive glucose reactions may occur if Clinitest, Benedict's Solution, or Fehling's Solution are used. Therefore, it is recommended that glucose tests based on enzymatic glucose oxidase reactions (such as Clinistix or Tes-Tape [Glucose Enzymatic Test Strip USP]) be used.

No long-term animal studies have been conducted with this drug.

Reproduction studies have been performed in laboratory animals at doses several times the human dose and have revealed no evidence of adverse effects to ampicillin. There are, however, no adequate and well-controlled studies in pregnant women. Because animal reproduction studies are not always predictive of human response, this drug should be used during pregnancy only if clearly needed.

Oral ampicillin-class antibiotics are poorly absorbed during labor. Studies in guinea pigs showed that intravenous administration of ampicillin slightly decreased the uterine tone and frequency of contractions, but moderately increased the height and duration of contractions. However, it is not known whether use of these drugs in humans during labor or delivery has immediate or delayed adverse effects on the fetus, prolongs the duration of labor, or increases the likelihood that forceps delivery or other obstetrical intervention or resuscitation of the newborn will be necessary.

Ampicillin is excreted in trace amounts in human milk. Therefore, caution should be exercised when ampicillin-class antibiotics are administered to a nursing woman.

Guidelines for the administration of these drugs to children are presented in DOSAGE AND ADMINISTRATION.

As with other penicillins, it may be expected that untoward reactions will be essentially limited to sensitivity phenomena. They are more likely to occur in individuals who have previously demonstrated hypersensitivity to penicillins and in those with a history of allergy, asthma, hay fever, or urticaria.

The following adverse reactions have been reported as associated with the use of ampicillin.

Skin rashes and urticaria have been reported frequently. A few cases of exfoliative dermatitis and erythema multiforme have been reported. Anaphylaxis is the most serious reaction experienced and has usually been associated with the parenteral dosage form. Note: Urticaria, other skin rashes, and serum sickness-like reactions may be controlled with antihistamines and, if necessary, systemic corticosteroids. Whenever such reactions occur, ampicillin should be discontinued, unless, in the opinion of the physician, the condition being treated is life-threatening and amenable only to ampicillin therapy. Serious anaphylactic reactions require the immediate use of epinephrine, oxygen, and intravenous steroids.

A moderate rise in serum glutamic oxaloacetic transaminase (SGOT) has been noted, particularly in infants, but the significance of this finding is unknown. Mild transitory SGOT elevations have been observed in individuals receiving larger (two to four times) than usual and oft-repeated intramuscular injections. Evidence indicates that glutamic oxaloacetic transaminase (GOT) is released at the site of intramuscular injection of ampicillin and that the presence of increased amounts of this enzyme in the blood does not necessarily indicate liver involvement.

Anemia, thrombocytopenia, thrombocytopenic purpura, eosinophilia, leukopenia, and agranulocytosis have been reported during therapy with the penicillins. These reactions are usually reversible on discontinuation of therapy and are believed to be hypersensitivity phenomena.

In cases of overdose, discontinue medication, treat symptomatically and institute supportive measures as required. In patients with renal function impairment, ampicillin-class antibiotics can be removed by hemodialysis but not peritoneal dialysis.

Infections of the respiratory tract and soft tissues.

Infections of the gastrointestinal and genitourinary tracts (including those caused by Neisseria gonorrhoeae in females).

In the treatment of chronic urinary tract and intestinal infections, frequent bacteriological and clinical appraisal is necessary. Smaller doses than those recommended above should not be used. Higher doses should be used for stubborn or severe infections. In stubborn infections, therapy may be required for several weeks. It may be necessary to continue clinical and/or bacteriological follow-up for several months after cessation of therapy.

Urethritis in males due to N. gonorrhoeae.

Adults: Two doses of 500 mg each at an interval of 8 to 12 hours. Treatment may be repeated if necessary or extended if required.

In the treatment of complications of gonorrheal urethritis, such as prostatitis and epididymitis, prolonged and intensive therapy is recommended. Cases of gonorrhea with a suspected primary lesion of syphilis should have darkfield examinations before receiving treatment. In all other cases where concomitant syphilis is suspected, monthly serological tests should be made for a minimum of four months.

The doses for the preceding infections may be given by either the intramuscular or intravenous route. A change to oral ampicillin may be made when appropriate.

Adults and children: 150 to 200 mg/kg/day. Start with intravenous administration for at least 3 days and continue with the intramuscular route every 3 to 4 hours.

Treatment of all infections should be continued for a minimum of 48 to 72 hours beyond the time that the patient becomes asymptomatic or evidence of bacterial eradication has been obtained. A minimum of 10-days treatment is recommended for any infection caused by Group A beta-hemolytic streptococci to help prevent the occurrence of acute rheumatic fever or acute glomerulonephritis.

Use only fresh prepared solutions. Intramuscular and intravenous injections should be administered within one hour after preparation, since the potency may decrease significantly after this period.

While ampicillin for injection 1 g and 2 g vials are primarily for intravenous use, the contents may be administered intramuscularly when the 250 mg or 500 mg vials are unavailable. In such instances, dissolve in 3.4 or 6.8 mL Sterile Water for Injection or Bacteriostatic Water for Injection respectively. The resulting solution will provide a concentration of 250 mg per mL.

For Direct Intravenous Use

For Administration by Intravenous Drip

Reconstitute as directed above ( For Direct Intravenous Use) prior to diluting with intravenous solution. Stability studies on ampicillin at several concentrations in various intravenous solutions indicate the drug will lose less than 10% activity at the temperatures noted for the time periods stated.

Only those solutions listed above should be used for the intravenous infusion of Ampicillin for Injection. The concentrations should fall within the range specified. The drug concentration and the rate and volume of the infusion should be adjusted so that the total dose of ampicillin is administered before the drug loses its stability in the solution in use.

Ampicillin for Injection, USP for IM or IV Injection. Ampicillin sodium equivalent to 250, 500 mg, 1 or 2 grams of ampicillin per vial. 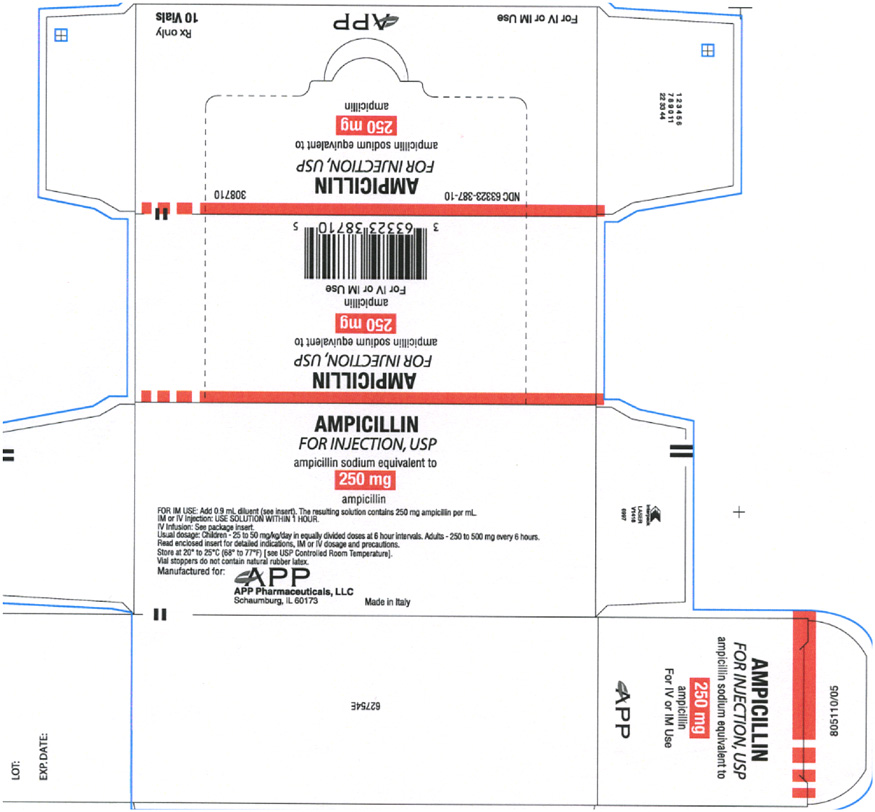 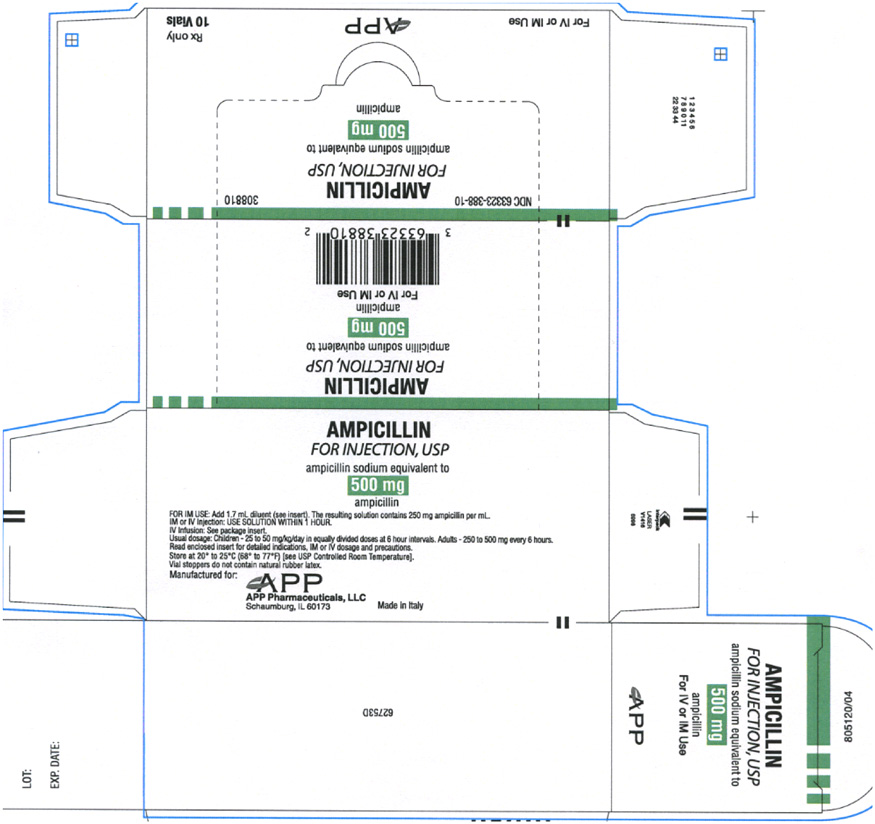 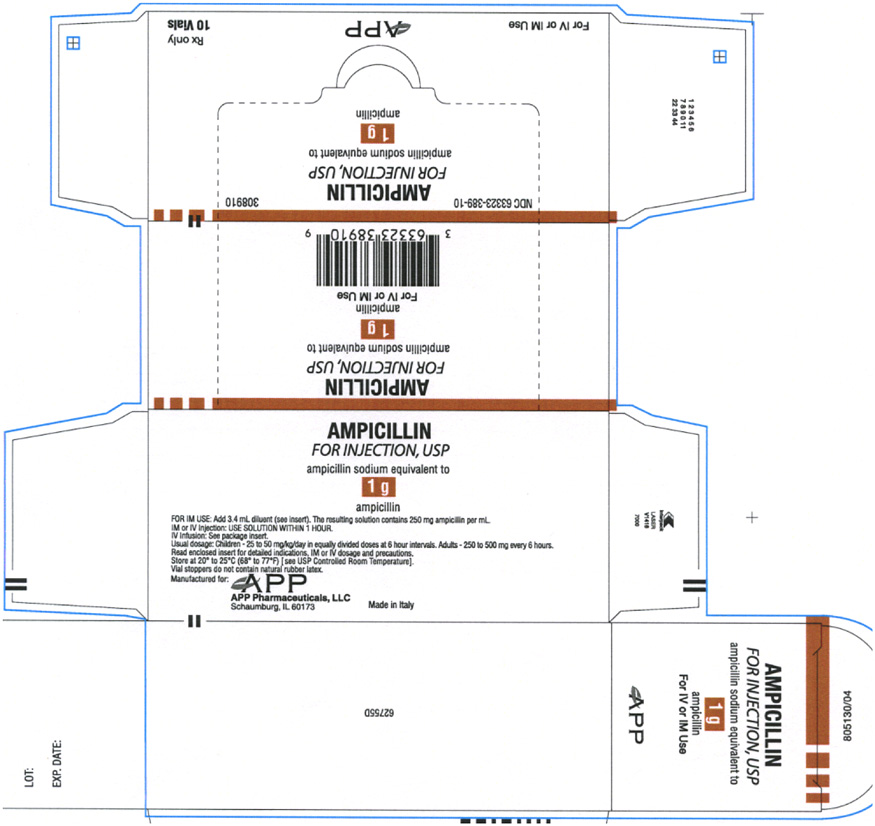 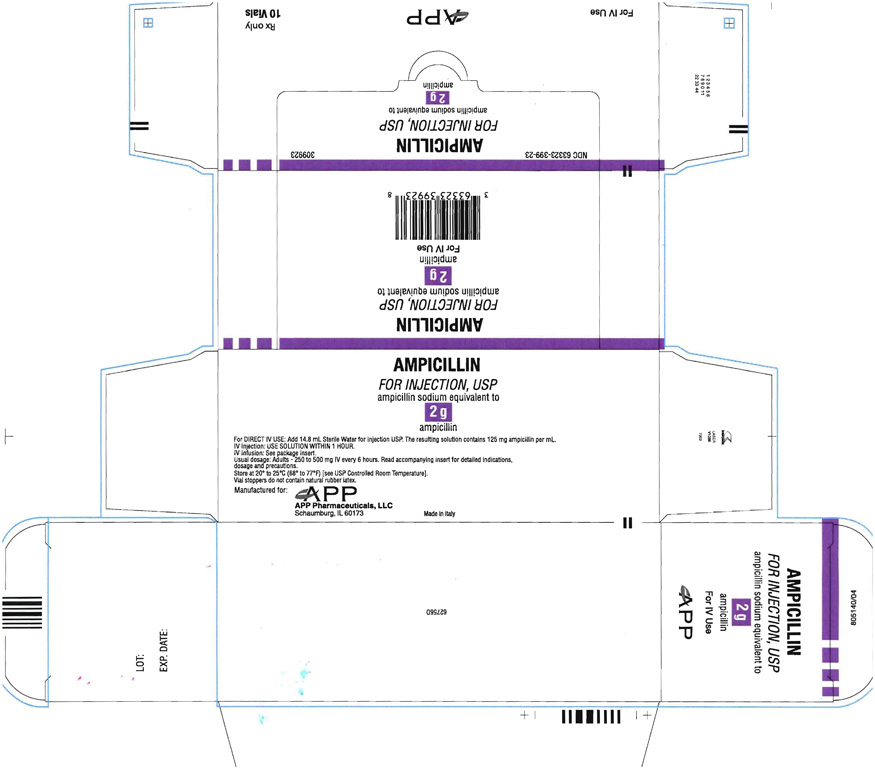 For IV Use
Rx only
10 Vials