Carisoprodol Tablets are indicated for the relief of discomfort associated with acute, painful musculoskeletal conditions in adults.

Carisoprodol Tablets should only be used for short periods (up to two or three weeks) because adequate evidence of effectiveness for more prolonged use has not been established and because acute, painful musculoskeletal conditions are generally of short duration [see Dosage and Administration (2)].

350 mg Tablets: white, round, unscored tablets debossed "2410 V" on one side and plain on the reverse side.

Carisoprodol Tablets are contraindicated in patients with a history of acute intermittent porphyria or a hypersensitivity reaction to a carbamate such as meprobamate.

Carisoprodol has sedative properties (in the low back pain trials, 13% to 17% of patients who received carisoprodol experienced sedation compared to 6% of patients who received placebo) [see ADVERSE REACTIONS (6.1)] and may impair the mental and/or physical abilities required for the performance of potentially hazardous tasks such as driving a motor vehicle or operating machinery. There have been post-marketing reports of motor vehicle accidents associated with the use of carisoprodol.

Since the sedative effects of carisoprodol and other CNS depressants (e.g., alcohol, benzodiazepines, opioids, tricyclic antidepressants) may be additive, appropriate caution should be exercised with patients who take more than one of these CNS depressants simultaneously.

Carisoprodol, and one of its metabolites, meprobamate (a controlled substance), may cause dependence [see Clinical Pharmacology (12.3)].

There have been postmarketing reports of seizures in patients who received carisoprodol. Most of these cases have occurred in the setting of multiple drug overdoses (including drugs of abuse, illegal drugs, and alcohol) [see Overdosage (10)].

The data described below are based on 1387 patients pooled from two double blind, randomized, multicenter, placebo controlled, one-week trials in adult patients with acute, mechanical, lower back pain [see Clinical Studies (14)]. In these studies, patients were treated with 250 mg of carisoprodol, 350 mg of carisoprodol, or placebo three times a day and at bedtime for seven days. The mean age was about 41 years old with 54% females and 46% males and 74% Caucasian, 16% Black, 9% Asian, and 2% other.

Table 1 displays adverse reactions reported with frequencies greater than 2% and more frequently than placebo in patients treated with carisoprodol in the two trials described above.

The following events have been reported during postapproval use of carisoprodol. Because these reactions are reported voluntarily from a population of uncertain size, it is not always possible to reliably estimate their frequency or establish a causal relationship to drug exposure.

Pregnancy Category C. There are no data on the use of carisoprodol during human pregnancy. Animal studies indicate that carisoprodol crosses the placenta and results in adverse effects on fetal growth and postnatal survival. The primary metabolite of carisoprodol, meprobamate, is an approved anxiolytic. Retrospective, post-marketing studies do not show a consistent association between maternal use of meprobamate and an increased risk for particular congenital malformations.

Teratogenic effects: Animal studies have not adequately evaluated the teratogenic effects of carisoprodol. There was no increase in the incidence of congenital malformations noted in reproductive studies in rats, rabbits, and mice treated with meprobamate. Retrospective, post-marketing studies of meprobamate during human pregnancy were equivocal for demonstrating an increased risk of congenital malformations following first trimester exposure. Across studies that indicated an increased risk, the types of malformations were inconsistent.

Nonteratogenic effects: In animal studies, carisoprodol reduced fetal weights, postnatal weight gain, and postnatal survival at maternal doses equivalent to 1–1.5 times the human dose (based on a body surface area comparison). Rats exposed to meprobamate in-utero showed behavioral alterations that persisted into adulthood. For children exposed to meprobamate in-utero, one study found no adverse effects on mental or motor development or IQ scores. Carisoprodol should be used during pregnancy only if the potential benefit justifies the risk to the fetus.

There is no information about the effects of carisoprodol on the mother and the fetus during labor and delivery.

Very limited data in humans show that carisoprodol is present in breast milk and may reach concentrations two to four times the maternal plasma concentrations. In one case report, a breast-fed infant received about 4–6% of the maternal daily dose through breast milk and experienced no adverse effects. However, milk production was inadequate and the baby was supplemented with formula. In lactation studies in mice, female pup survival and pup weight at weaning were decreased. This information suggests that maternal use of carisoprodol may lead to reduced or less effective infant feeding (due to sedation) and/or decreased milk production. Caution should be exercised when carisoprodol is administered to a nursing woman.

The efficacy, safety, and pharmacokinetics of carisoprodol in pediatric patients less than 16 years of age have not been established.

The efficacy, safety, and pharmacokinetics of carisoprodol in patients over 65 years old have not been established.

Patients with reduced CYP2C19 activity have higher exposure to carisoprodol. Therefore, caution should be exercised in administration of carisoprodol to these patients [see Clinical Pharmacology (12.3)].

Carisoprodol is not a controlled substance [see Warnings and Precautions (5.2)]. Discontinuation of carisoprodol in animals or in humans after chronic administration can produce withdrawal signs, and there are published case reports of human carisoprodol dependence.

Overdosage of carisoprodol commonly produces CNS depression. Death, coma, respiratory depression, hypotension, seizures, delirium, hallucinations, dystonic reactions, nystagmus, blurred vision, mydriasis, euphoria, muscular incoordination, rigidity, and/or headache have been reported with carisoprodol overdosage. Many of the carisoprodol overdoses have occurred in the setting of multiple drug overdoses (including drugs of abuse, illegal drugs, and alcohol). The effects of an overdose of carisoprodol and other CNS depressants (e.g., alcohol, benzodiazepines, opioids, tricyclic antidepressants) can be additive even when one of the drugs has been taken in the recommended dosage. Fatal accidental and non-accidental overdoses of carisoprodol have been reported alone or in combination with CNS depressants.

Treatment of Overdosage: Basic life support measures should be instituted as dictated by the clinical presentation of the carisoprodol overdose. Induced emesis is not recommended due to the risk of CNS and respiratory depression, which may increase the risk of aspiration pneumonia. Gastric lavage should be considered soon after ingestion (within one hour). Circulatory support should be administered with volume infusion and vasopressor agents if needed. Seizures should be treated with intravenous benzodiazepines and the reoccurrence of seizures may be treated with phenobarbital. In cases of severe CNS depression, airway protective reflexes may be compromised and tracheal intubation should be considered for airway protection and respiratory support.

Carisoprodol Tablets, USP are available as 350 mg round, white tablets for oral administration. Carisoprodol is a white, crystalline powder, having a mild, characteristic odor and a bitter taste. It is slightly soluble in water; freely soluble in alcohol, in chloroform, and in acetone; and its solubility is practically independent of pH. Carisoprodol is present as a racemic mixture. Chemically, carisoprodol is N-isopropyl-2-methyl-2-propyl-1,3-propanediol dicarbamate and the molecular formula is C12H24N2O4, with a molecular weight of 260.33. The structural formula is: 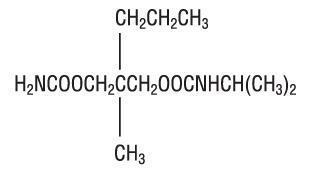 The mechanism of action of carisoprodol in relieving discomfort associated with acute painful musculoskeletal conditions has not been clearly identified.

In animal studies, muscle relaxation induced by carisoprodol is associated with altered interneuronal activity in the spinal cord and in the descending reticular formation of the brain.

Absorption: Absolute bioavailability of carisoprodol has not been determined. The mean time to peak plasma concentrations (Tmax) of carisoprodol was approximately 1.5 to 2 hours. Co-administration of a high-fat meal with carisoprodol (350 mg tablet) had no effect on the pharmacokinetics of carisoprodol. Therefore, carisoprodol may be administered with or without food.

Metabolism: The major pathway of carisoprodol metabolism is via the liver by cytochrome enzyme CYP2C19 to form meprobamate. This enzyme exhibits genetic polymorphism (see Patients with Reduced CYP2C19 Activity below).

Gender: Exposure of carisoprodol is higher in female than in male subjects (approximately 30–50% on a weight adjusted basis). Overall exposure of meprobamate is comparable between female and male subjects.

Patients with Reduced CYP2C19 Activity: Carisoprodol should be used with caution in patients with reduced CYP2C19 activity. Published studies indicate that patients who are poor CYP2C19 metabolizers have a 4-fold increase in exposure to carisoprodol, and concomitant 50% reduced exposure to meprobamate compared to normal CYP2C19 metabolizers. The prevalence of poor metabolizers in Caucasians and African Americans is approximately 3–5% and in Asians is approximately 15–20%.

Long term studies in animals have not been performed to evaluate the carcinogenic potential of carisoprodol.

Carisoprodol was not formally evaluated for effects on fertility. Published reproductive studies of carisoprodol in mice found no alteration in fertility although an alteration in reproductive cycles characterized by a greater time spent in estrus was observed at a carisoprodol dose of 1200 mg/kg/day. In a 13-week toxicology study that did not determine fertility, mouse testes weight and sperm motility were reduced at a dose of 1200 mg/kg/day. In both studies, the no effect level was 750 mg/kg/day, corresponding to approximately 2.6 times the human equivalent dosage of 350 mg four times a day, based on a body surface area comparison. The significance of these findings for human fertility is not known.

The safety and efficacy of carisoprodol for the relief of acute, idiopathic mechanical low back pain was evaluated in two 7-day, double blind, randomized, multicenter, placebo controlled, U.S. trials (Studies 1 and 2). Patients had to be 18 to 65 years old and had to have acute back pain (≤ 3 days of duration) to be included in the trials. Patients with chronic back pain; at increased risk for vertebral fracture (e.g., history of osteoporosis); with a history of spinal pathology (e.g., herniated nucleus pulposis, spondylolisthesis or spinal stenosis); with inflammatory back pain, or with evidence of a neurologic deficit were excluded from participation. Concomitant use of analgesics (e.g., acetaminophen, NSAIDs, tramadol, opioid agonists), other muscle relaxants, botulinum toxin, sedatives (e.g., barbiturates, benzodiazepines, promethazine hydrochloride), and anti-epileptic drugs was prohibited.

The proportion of patients who used concomitant acetaminophen, NSAIDs, tramadol, opioid agonists, other muscle relaxants, and benzodiazepines was similar in the treatment groups.

The results for the primary efficacy evaluations in the acute, low back pain studies are presented in Table 3.

a The primary efficacy endpoints (Relief from Starting Backache and Global Impression of Change) were assessed by the patients on Study Day 3. These endpoints were scored on a 5-point rating scale from 0 (worst outcome) to 4 (best outcome).

b Mean is the least squared mean and SE is the standard error of the mean. The ANOVA model was used for the primary statistical comparison between the carisoprodol 250 mg and placebo groups.

Patients treated with carisoprodol experienced improvement in function as measured by the Roland-Morris Disability Questionnaire (RMDQ) score on Days 3 and 7.

Patients should be advised to contact their physician if they experience any adverse reactions to carisoprodol tablets.

17.2 Avoidance of Alcohol and Other CNS Depressants

Patients should be advised to avoid alcoholic beverages while taking carisoprodol tablets and to check with their doctor before taking other CNS depressants such as benzodiazepines, opioids, tricyclic antidepressants, sedating antihistamines, or other sedatives [see Warnings and Precautions (5.1)].

17.3 Carisoprodol Tablets Should Only Be Used for Short-Term Treatment

Patients should be advised that treatment with carisoprodol tablets should be limited to acute use (up to two or three weeks) for the relief of acute, musculoskeletal discomfort. In the post-marketing experience with carisoprodol tablets, cases of dependence, withdrawal, and abuse have been reported with prolonged use. If the musculoskeletal symptoms still persist, patients should contact their healthcare provider for further evaluation. 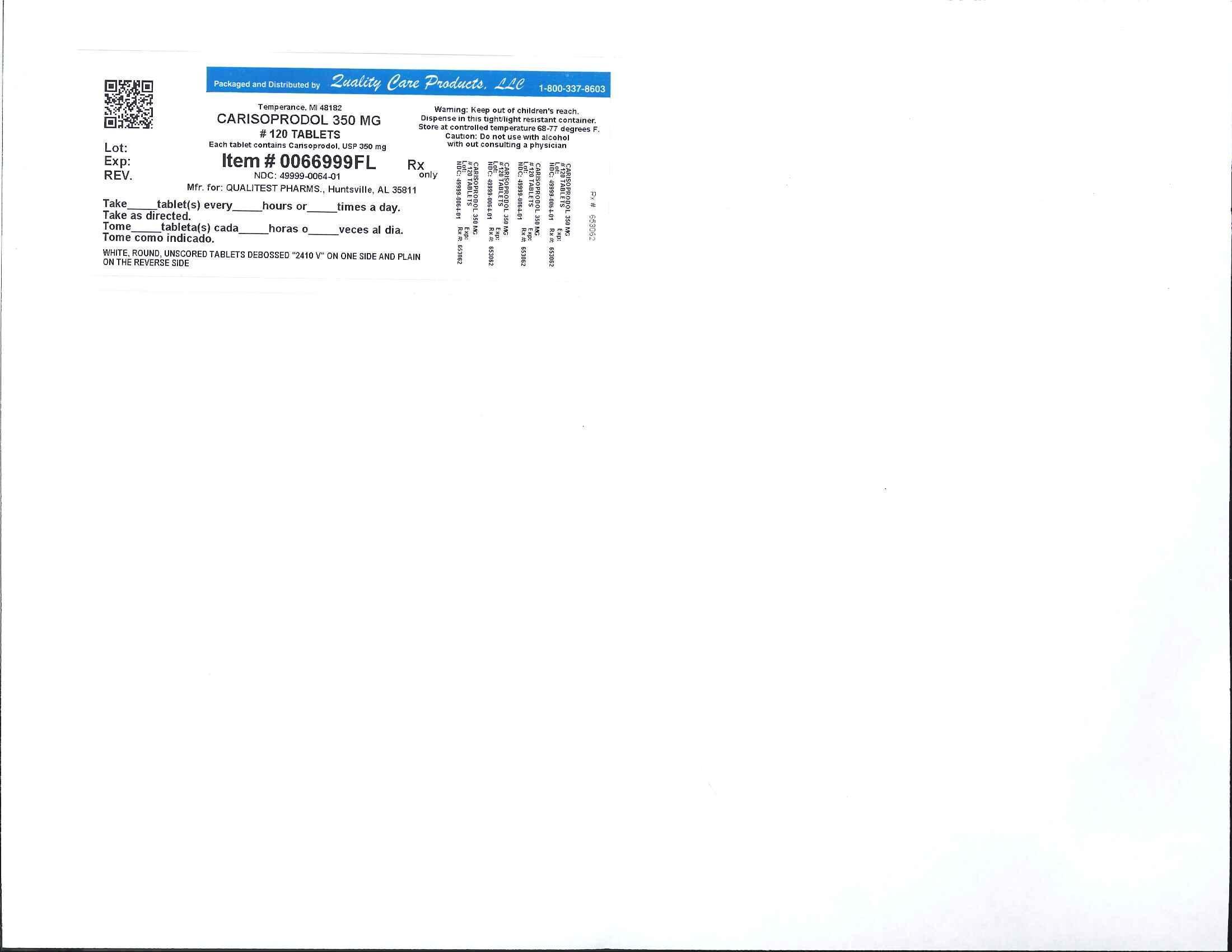